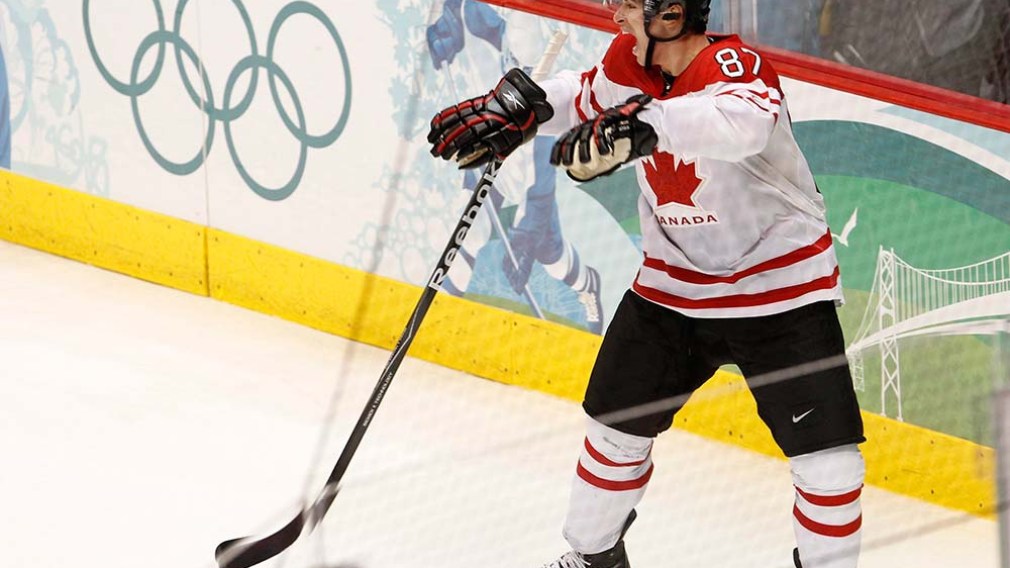 NHL players participated in their first Olympic Winter Games at Nagano 1998. The trend of Hockey Canada sending its best will continue for Sochi 2014, thanks to the recent NHL decision. In light of that decision we are looking back on the top five goals in Canadian Olympic men’s Ice Hockey history. We hope to add to this list following Sochi 2014.

Arguably one of the most memorable moments in Canadian Olympic history, Sidney Crosby‘s gold medal-clinching goal versus the USA in the Vancouver 2010 finals will never be forgotten. Team Canada led 2-1 with only 30 seconds separating them from the gold medal, when the USA was able to put the tying goal past a sprawled Roberto Luongo to force overtime. Just over seven and a half minutes into OT, Sid the Kid found himself with a golden opportunity all alone in front of the net. He made no mistake, burying the gift to seal Canada’s 2nd gold medal in the NHL era.

2. Super Mario’s Between the Legs Pass

Following a disappointing first Olympic Games with NHLers at Nagano 1998, Team Canada had something to prove in Salt Lake City in 2002. They drew the host American team in the gold medal match, and what ensued was an all-out battle. Chosen as team captain, “Super Mario” Lemieux was nothing short of brilliant, notching six points in five games. However, his most spectacular play of the tournament didn’t even result in a point. With the USA up 1-0, Canada found themselves on an odd-man rush in the offensive zone. Chris Pronger spotted Super Mario streaking to the net, and delivered a perfect pass. However, unbeknownst to Pronger, Mario didn’t even want the puck! He saw a wide open Paul Kariya to his left, and, taking a page from a soccer star, he let the pass go straight through his legs. Kariya put the puck into the wide open cage for Canada’s first goal of the game.

Prior to their classic battle with the Czechs in the Nagano 1998 semis, Team Canada was drawn into the same round robin pool as the rival Americans. Canada’s 2-0 record put them first in the pool, as they met the USA in their final preliminary match. As the first period drew to a close with no score, Canada’s ‘great ones’ got to work. Joe Sakic weaved his way across the blue line, drawing two defenders towards him. Just as it looked like he was about to lose the puck, he tipped it to a streaking Wayne Gretzky. The Great One took a huge wind up and amazingly delivered a perfect slap pass to a waiting Rob Zamuner for the game’s first goal.

With just over a minute left in their 1998 semi-final match with the Czech Republic, Team Canada found themselves down 1-0 and in need of a late equalizer. With the pressure on, Canada began throwing a flurry of shots at Czech goalie Dominik Hasek. Hasek was able to stop the first few shots, forcing the rebound behind the net. Captain Eric Lindros ended up with the puck on his stick and fed a perfect pass into the slot for Trevor Linden. Linden made no mistake, burying it top corner to force overtime and, eventually, a shootout that Canada went on to lose (with Wayne Gretzky famously not selected as one of five players to shoot).

Team Canada was up 5-0 on Norway in round robin play at Vancouver 2010 when three of Canada’s superstars decided to show off their passing abilities. Jarome Iginla entered the offensive zone with speed and made a gorgeous drop pass to Sidney Crosby. Sid the Kid took the puck and faked to his forehand before he dragged to the backhand, and then fed Rick Nash at the side of the net. Nash drew the Norwegian goalie right to him and slid a sweet backdoor pass back to the wide open Iginla, who shovelled the puck into the gaping net.

Super Mario’s gorgeous pass led to the opening goal of the 2002 gold medal match, but it was another heroic Canadian who would seal the win. With Team Canada up 4-2 in the final few minutes, “Burnaby Joe” Sakic turned on his jets and made an awesome deke on American goalie Mike Richter. It was his second goal and fourth point of the game, locking up Canada’s first men’s Hockey gold medal in 50 years.