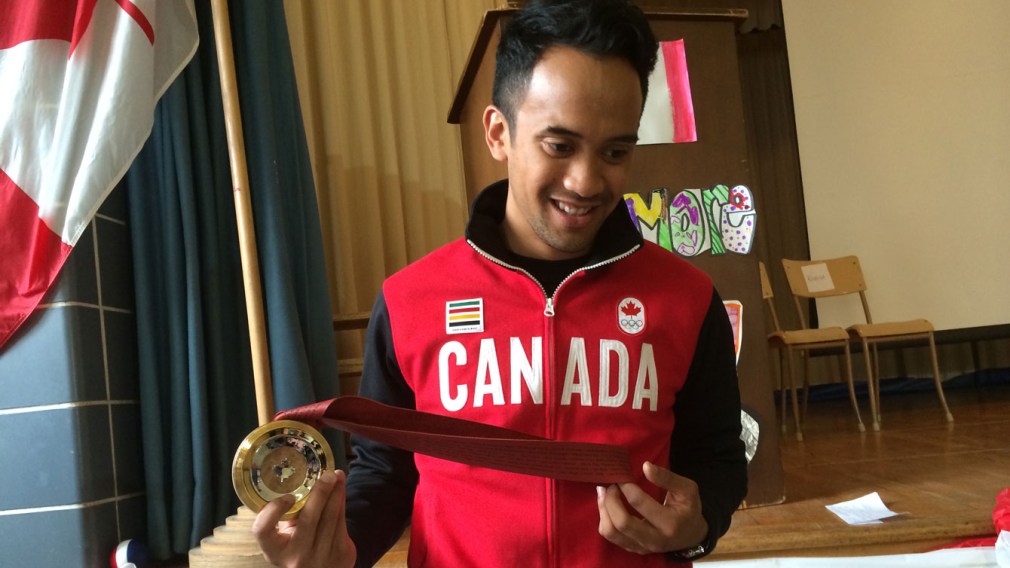 Many Canadians are familiar with the selfless act of Gilmore Junio at Sochi 2014, the speed skater giving up his place for a faster teammate, Denny Morrison, to win a silver medal for Canada.

Bit quieter however, was the #ThanksGilmore campaign; an effort by Toronto-based design firm Jacknife, to crowd source the funding for and create the commemorative medal, that represents the heartfelt gratitude of Canadians.

On Wednesday, May 14 at Kitchener, Ontario’s King Edward Public School, Junio was presented with his medal. Junio meets with the medal presenters at King Edward PS. The students raised $161 toward the #ThanksGilmore campaign. The #ThanksGilmore medal is made of gold, silver and Western maple burl; with a silver leaf at the centre that was 3D-printed and then cast in silver. Junio was presented with the medal in front of cheering students, faculty and parents. Names of those who contributed to the #ThanksGilmore campaign are printed on the medal strap. Gilmore Junio: “a huge thank-you to the people at Jacknife and to all of the people that donated to the project – I think this shows what Canada is all about.” The team from Jacknife that crowd sourced over $7,000 and designed the medal, along with the custom-crafted box. Donor names are laser-etched on the interior of the doors. Junio sits with two of the student presenters at King Edward PS. In the midst of intense media crush at King Edward PS, Gilmore found a little time for horseplay at the school library.