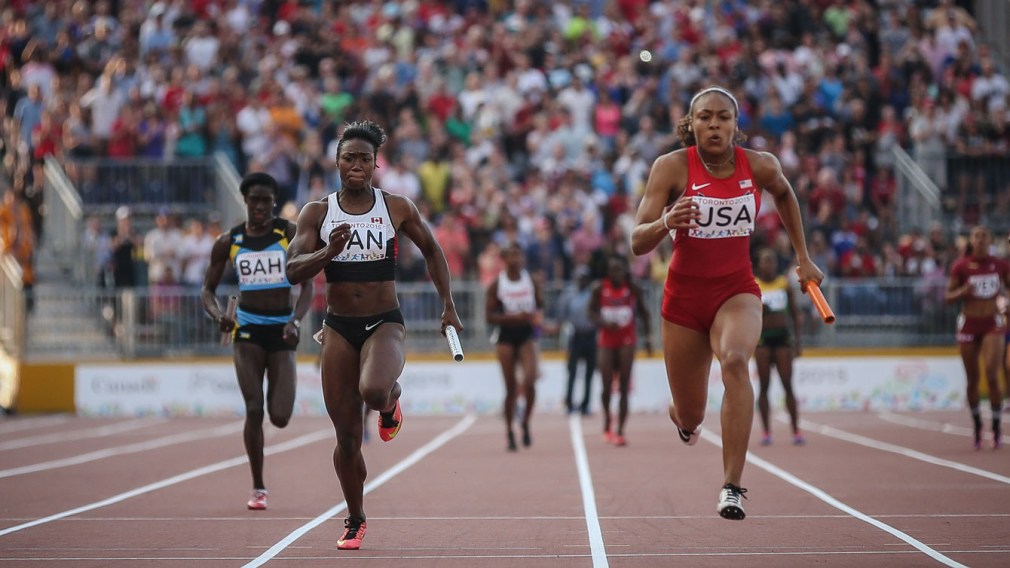 Editor’s note: This page originally contained a story about the Canadian men’s 4x100m team winning Pan Am Games gold in a record-setting 38.06 seconds. However, the team was disqualified. More on the disqualification.

On either side of heartbreak for some of their male teammates, Canadian women took home four medals from Toronto 2015 Pan American Games on the last night of track events at the Pan Am Athletics Stadium.

The women’s 4x100m team had taken bronze minutes before the men’s triumph-turned-tragedy. The foursome of Crystal Emmanuel, Kimberly Hyacinthe, Jellisa Westney and Khamica Bingham ran 43-seconds flat behind USA (42.58) and Jamaica (42.68). Bingham did enough to hold off a Brazilian challenge by helping Canada to win by just one one-hundredth of a second. 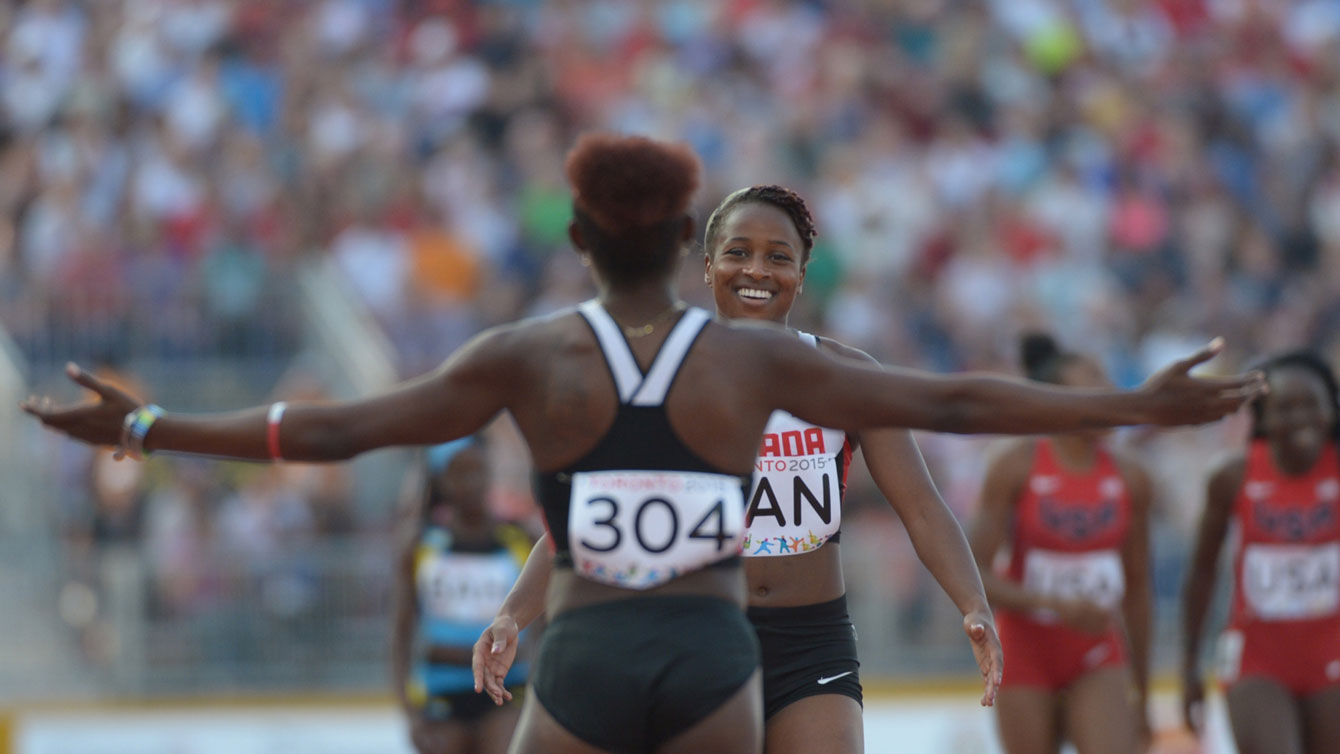 Bingham discussed her part of the race in closing out the podium spot saying “my teammat Jellisa, she was coming in fast and I knew I had to go. She gave me the stick, you know there was U.S. and Jamaica that was slightly ahead but I just tried to run as fast as I could.”

Westney said the packed Pan Am Athletics Stadium was on her mind as she blasted out of the second exchange. “As I was coming on the track, that’s what kind of got me going, when I was seeing the crowd,” she said. 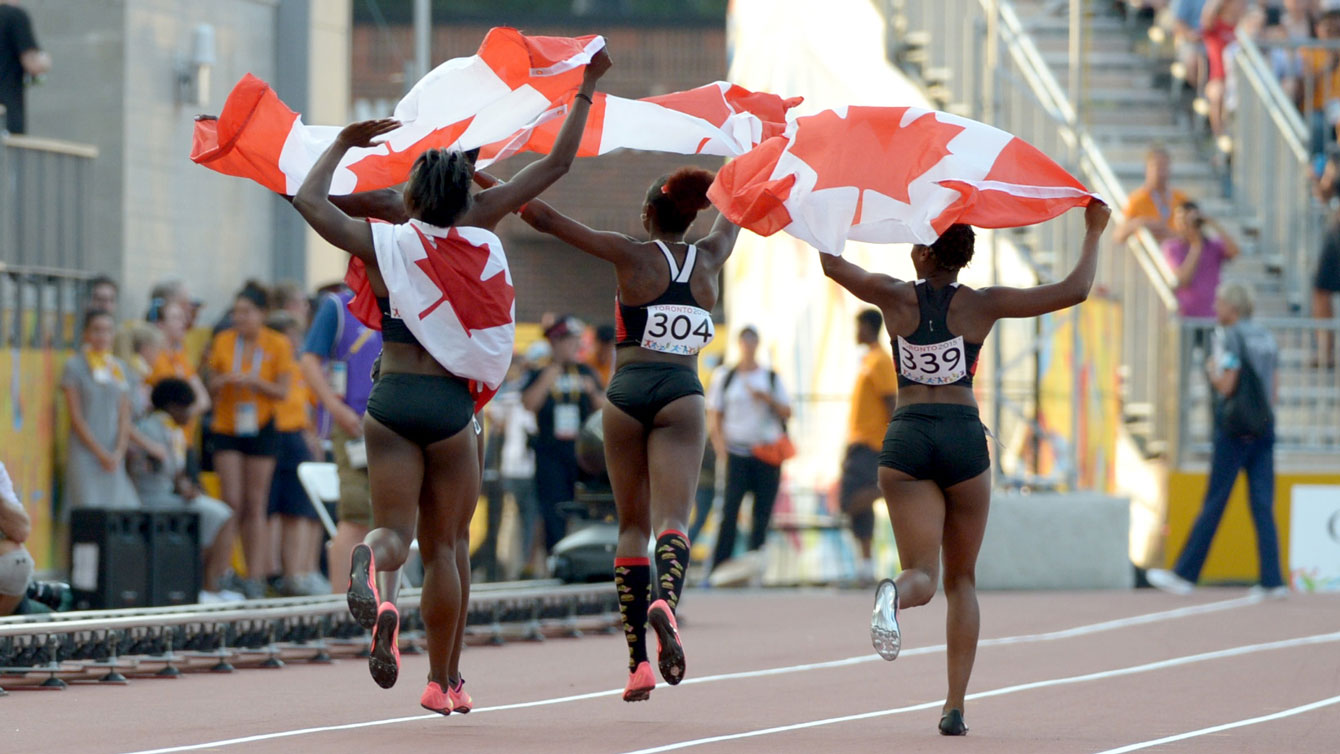 The baton was passed to Westney from Hyacinthe, who believes this is only the beginning for the Canadian women’s team, which has already earned a spot for Rio 2016 by placing top eight at the IAAF Relays in Bahamas earlier this year.

“Well we already started,” Hyacinthe said when asked if the team will be getting more recognition. “This is just a continuation and we are just going to be great the next few years.” 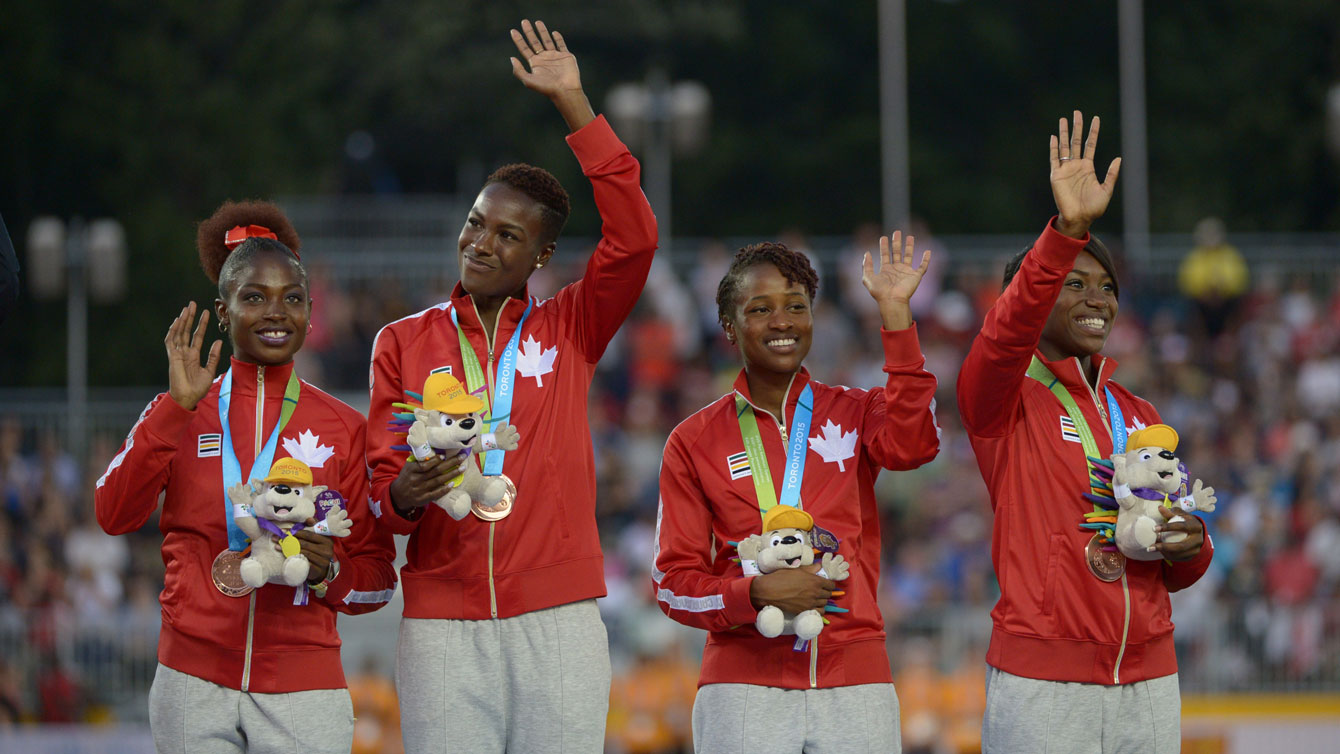 Canadian women’s relay team receive their 4x100m bronze medal at the Pan Am Games in Toronto on July 25, 2015.

“You know, before we came in here,” Emmanuel added, “we looked at each other and said all we have is faith and faith got us a bronze medal.”

Canada added a second Pan Am Games relay medal on the night in the women’s 4x400m, taking another bronze behind USA and Jamaica. 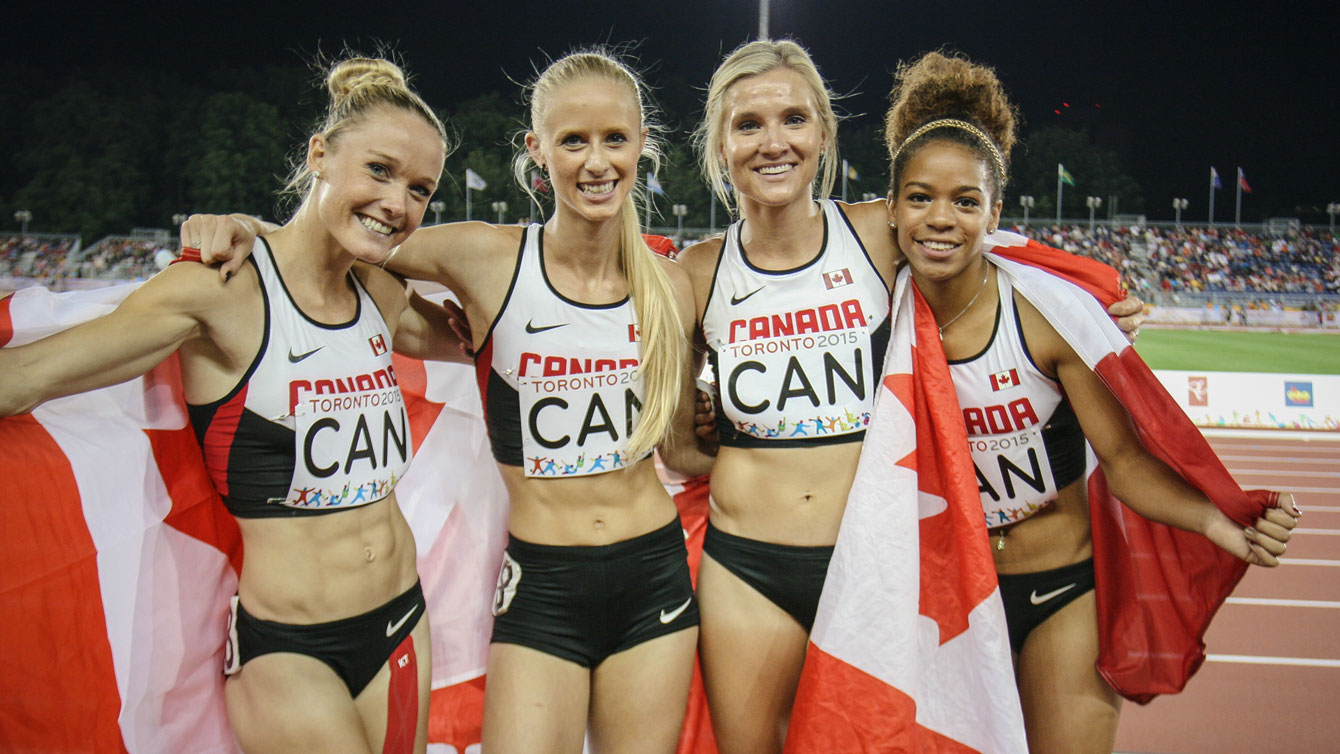 Wells, who is from nearby Markham, Ontario, said “I think we knew that we all had to show the whole country that we can come home with a medal so hearing from them cheer for us and it’s nice to show off our hard work. We worked so hard and we are happy we could do it in front of the crowd today.” 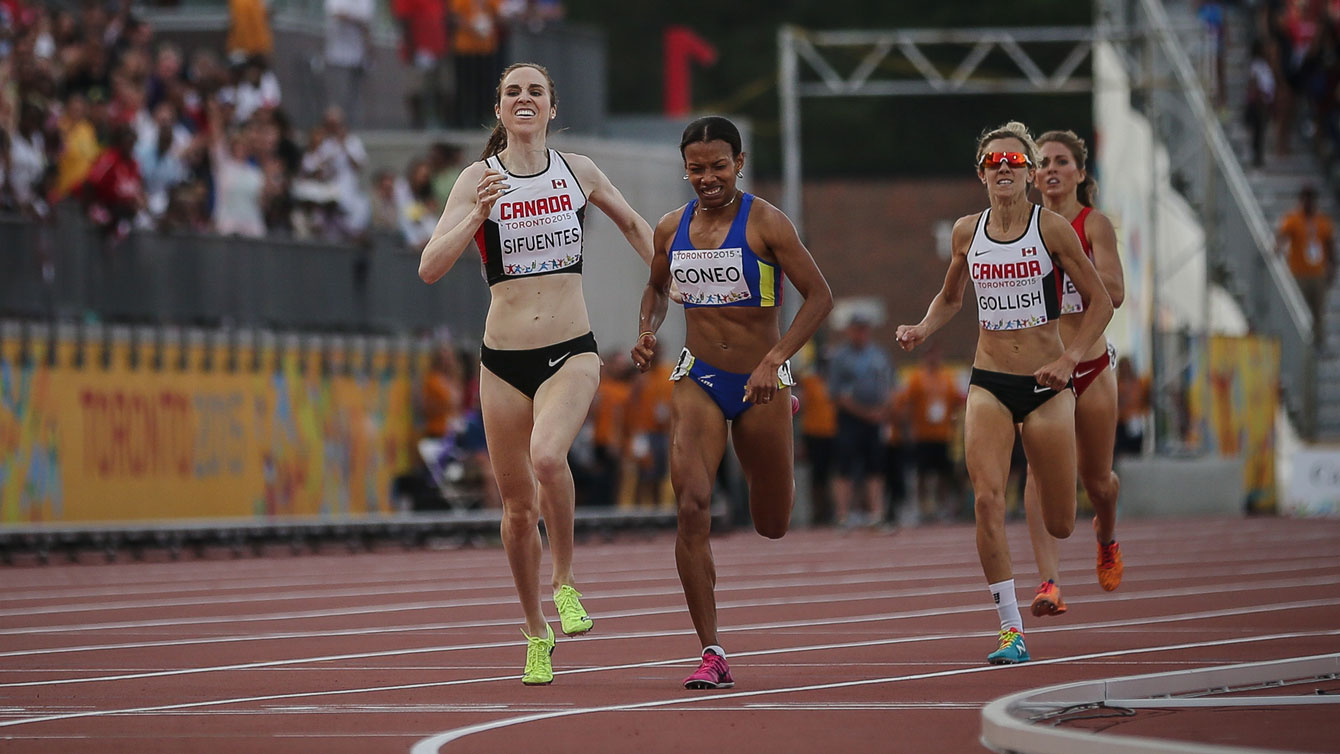 Nicole Sifuentes and Sasha Gollish finish second and third for Canada at the Toronto 2015 Pan Am Games in the women’s 1500m.

Sifuentes and eventual winner Muriel Coneo of Colombia had an intense foot race in the last 100 metres, reminding the Canadian crowd of Melissa Bishop’s 800-metre victory earlier this week. However, this finish didn’t go Canada’s way with Coneo (4:09.05) beating Sifuentes by one eight-hundredth of a second. Gollish crossed the line 1.06 seconds behind the winner.