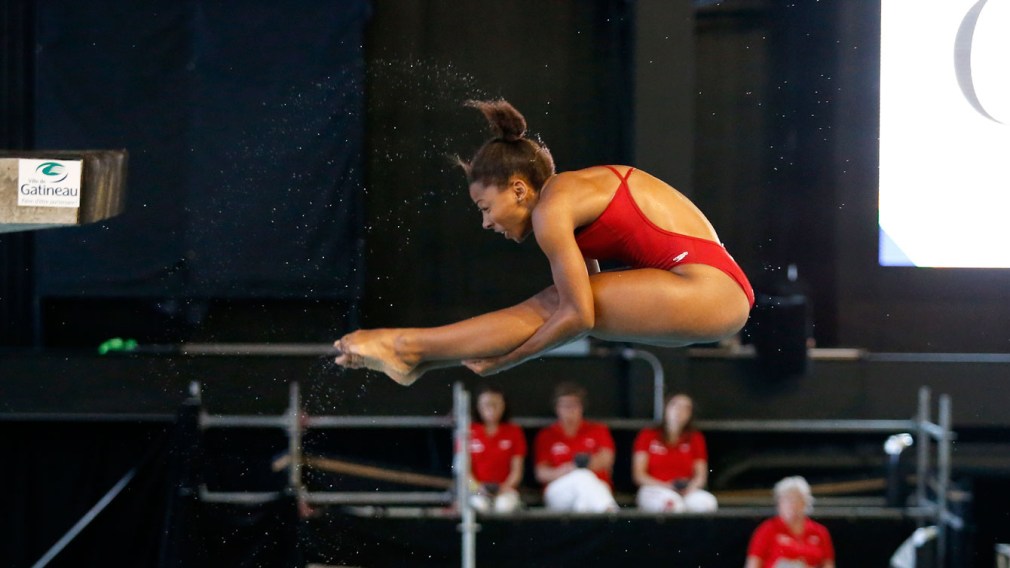 Canadian divers ended the FINA World Series stop in Windsor, with a total of eight medals – one gold, four silver and three bronze.

Jennifer Abel dove to a new personal best of 386.55 points, to claim a bronze medal in women’s 3m springboard. China’s Zi He stole the top spot on the podium with a score of 401.55, her teammate Tingmao Shi’s 394.05 was good enough to win silver.

Abel didn’t stop with one medal on Sunday, the Canadian teamed up with Francois Imbeau-Dulac to win the nation’s only gold medal of the weekend in mixed 3m synchro. The pair’s score of 345.69, landed them ahead of silver medallists Wang Han and Yang Hao from China (343.50). Mexico’s Dolores Hernandez and Jahir Ocampo won the bronze medal with 313.65.

Canadian divers added two silver and a bronze, on the second day of competition at the FINA World Series in Windsor on Saturday.

Roseline Filion and Meaghan Benfeito started off day two with podium finishes in the women’s 10m platform. The Canadians finished second and third after scoring 378.85 and 372.70 points respectively. China’s Qian Ren won the competition with a score of 445.25.

Benfeito made her second podium appearance of the evening, finishing second with Vincent Riendeau in the mixed 10m synchro event. Chinese divers Xiaohu Tai and Yani Chang claimed the gold medal, with a score of 337.86, while Australia’s Melissa Wu and Domonic Bedggood secured third with 316.14.

Meaghan Benfeito and Roseline Filion led Canada on day one, finishing second in women’s 10m synchro with a score of 313.71. China won its third synchro diving event of the day, after Chen Ruolin and Lui Huixia won with 348.60 points. Great Britain’s Tonia Couch and Lois Toulson secured the final spot on the podium, finishing third (310.68).

Jennifer Abel and Pamela Ware scored 312.87 points to secure a bronze medal in women’s 3m synchro. Italian divers Francesca Dallapé and Tania Cagnotta finished second with 313.44. The Canadians and Italians had a close battle for the second spot on the podium. The hosts sat in second heading into the final dive, before an error secured the silver for Italy. China’s He Zi and Han Wang topped the podium with a score of 339.90.

Next weekend, Canadians will head to Kazan for the final World Series event.