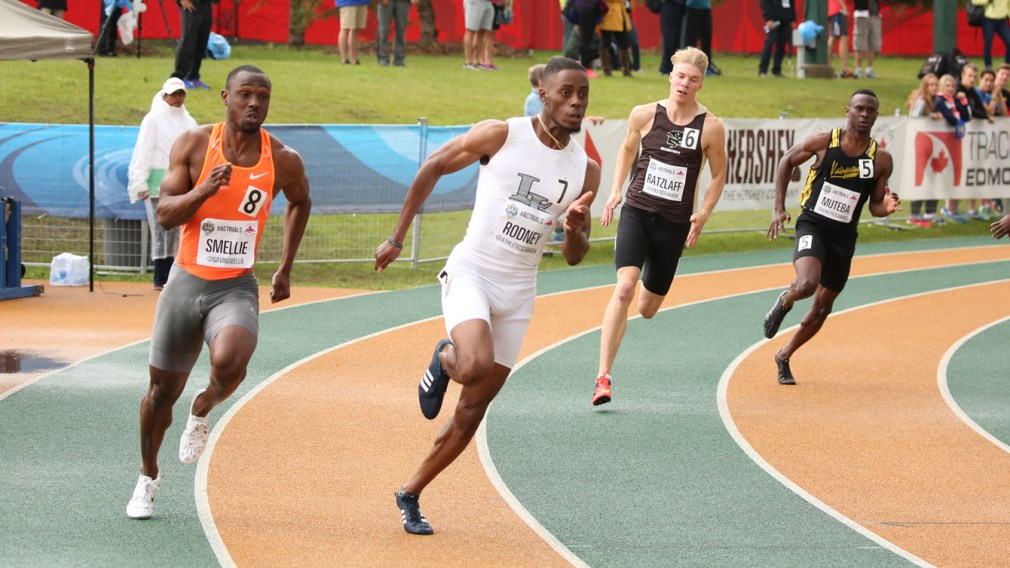 Olympic.ca will be following top stories from the Athletics Canada trials July 7 to 10 in Edmonton, which will determine who will compete for Team Canada in track and field at Rio 2016. The trials are streamed live here. 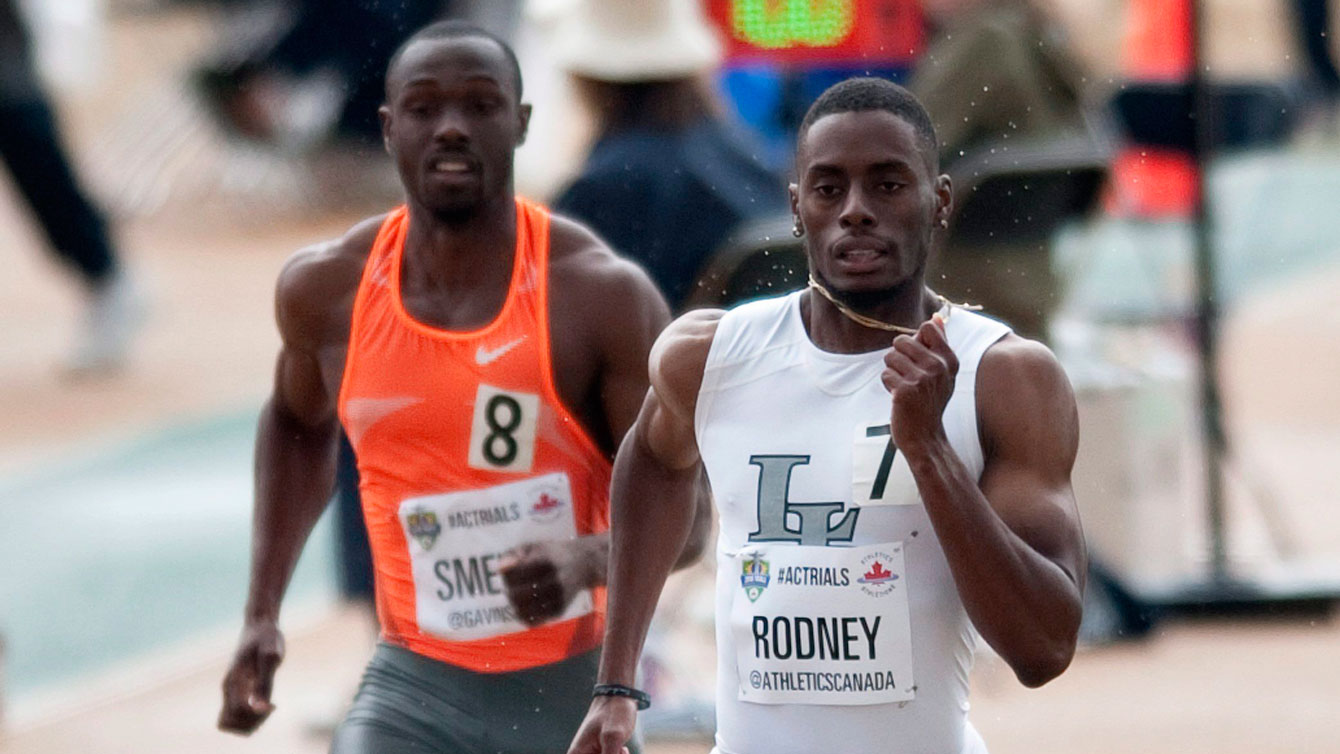 For Canadian track fans Brendon Rodney was already a household name, having run the third leg of the 4x100m relay at the world championships in 2015, helping Canada to a bronze medal.

Now Rodney will have raised eyebrows well beyond Canadian soil, after winning the men’s 200m in a jaw-dropping 19.96 seconds in Edmonton on Sunday, beating Aaron Brown and Andre De Grasse in the process. Brown and De Grasse ran a near-identical 20.32 but the former had the faster time to the next decimal, placing him on the second spot of the podium. 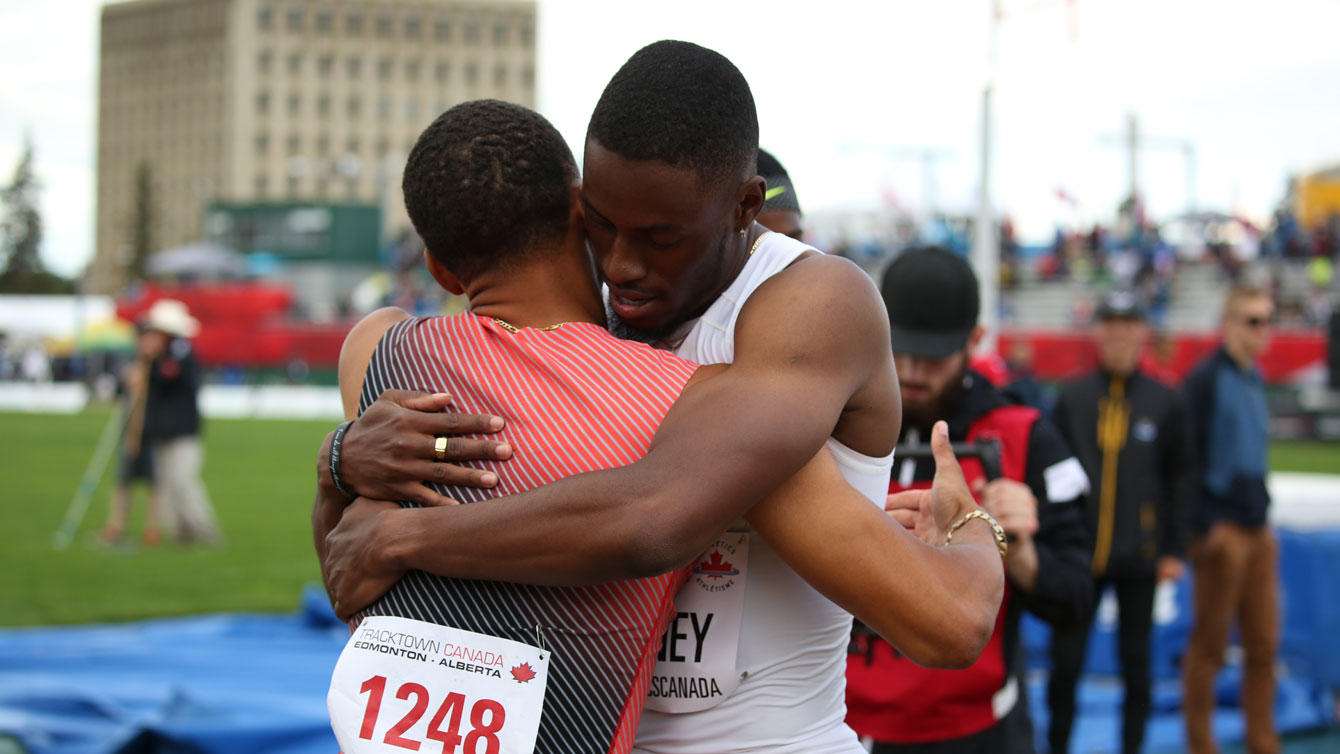 Rodney did the deed in soggy weather conditions, following a two-hour rain delay and cool temperatures on a wet track. The elements didn’t matter, nor the fact that Brown and De Grasse were heavily expected to battle for  the top two spots, just as they had done the previous day in the 100m.

With Sunday’s clocking, Rodney is the fifth fastest 200m runner in the world this year. He is also the second Canadian ever to run sub-20 seconds in the discipline, following De Grasse’s 19.88 set at TO2015 Pan Am Games last summer.

De Grasse and Brown will expect to run the 100m and 200m in Rio, with Rodney focusing on the longer sprint distance. Earlier this year, Brown became the fourth Canadian to run the 100m in under 10 seconds and is the sixth fastest 200m runner in the world this year. With three of the fastest men in the world on the 4x100m relay team, Canada should be considered a heavy Olympic medal favourite. 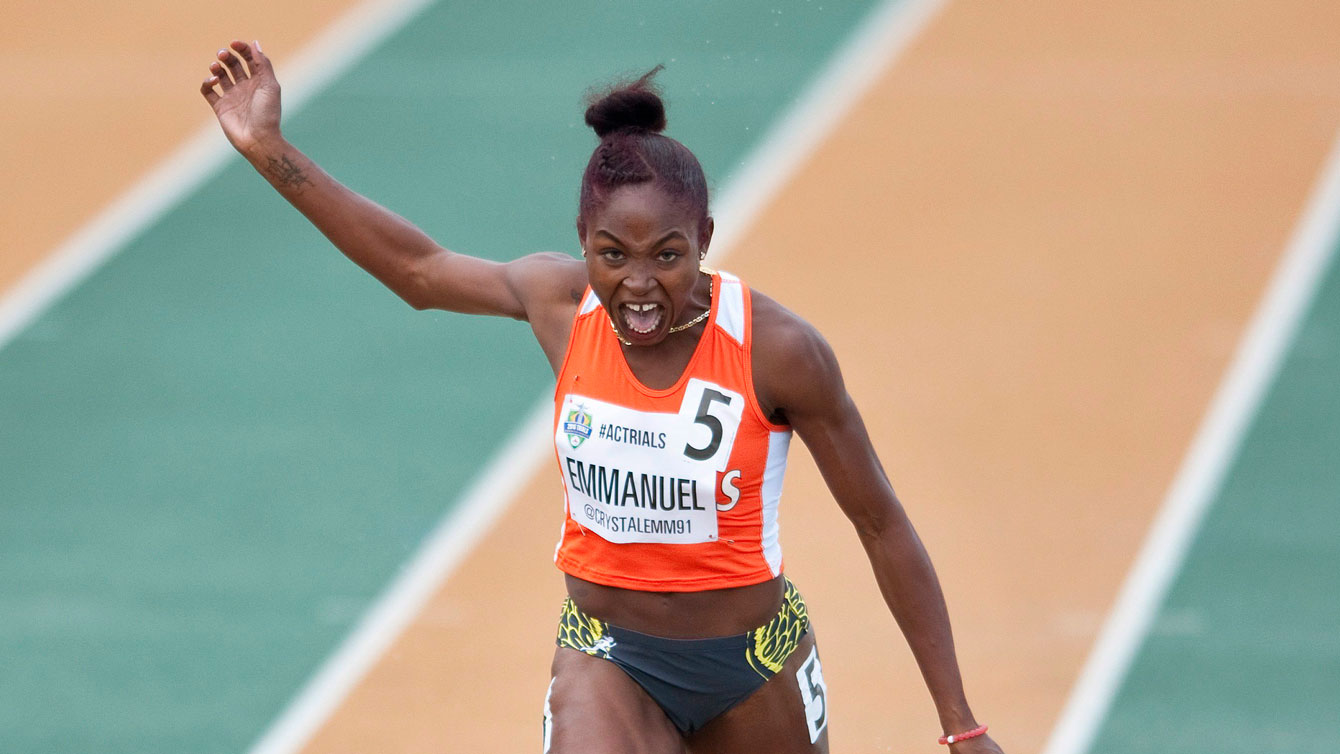 A day earlier Emmanuel took the 100m title in 11.18 second with Hyacinthe in third place. While Emmanuel will certainly be running both sprint distances, Athletics Canada will decide if Hyacinthe will do the double.

It will be Emmanuel’s second Olympic Games, having run the 200m at London 2012. Hyacinthe will be making her Olympic debut. 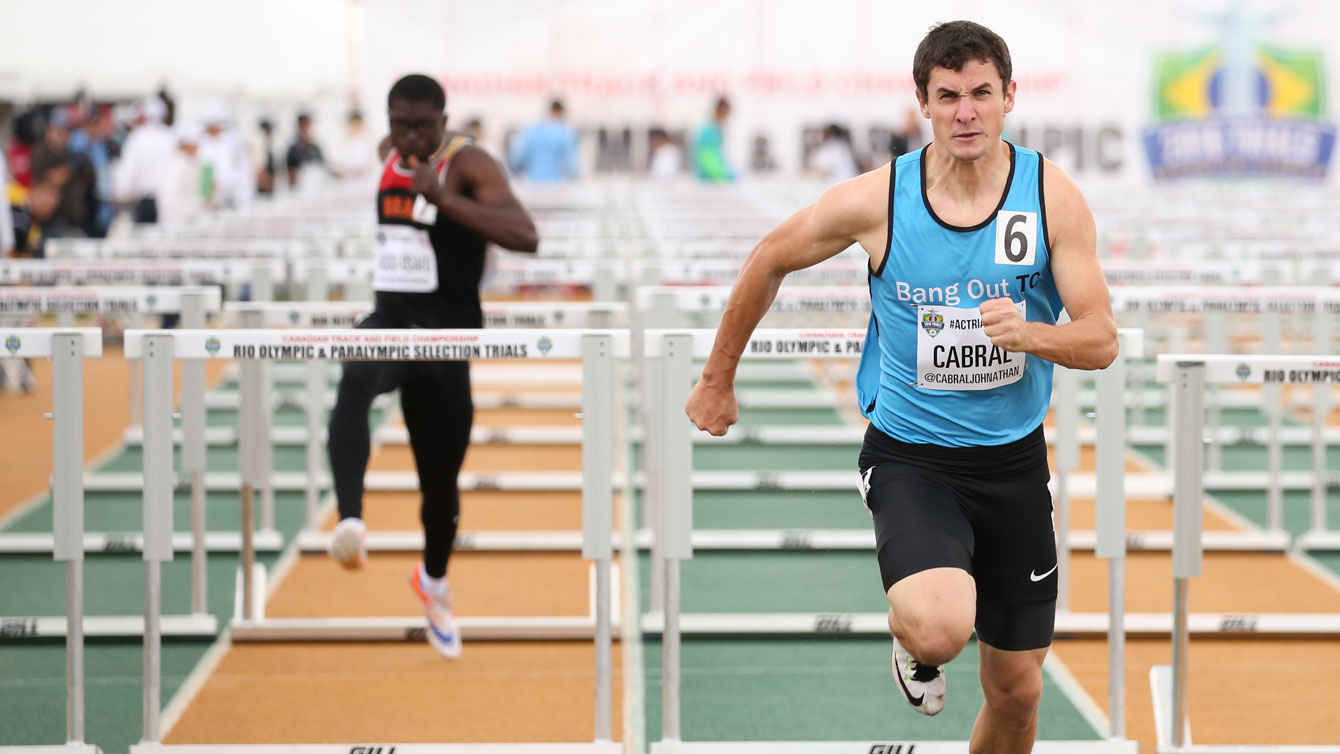 Jonathan Cabral during heats of the 110m hurdles of Olympic trials on July 10, 2016.

Both Cabral and Kaba have Olympic standard and should expect to receive their nomination jackets at Monday’s team announcement. 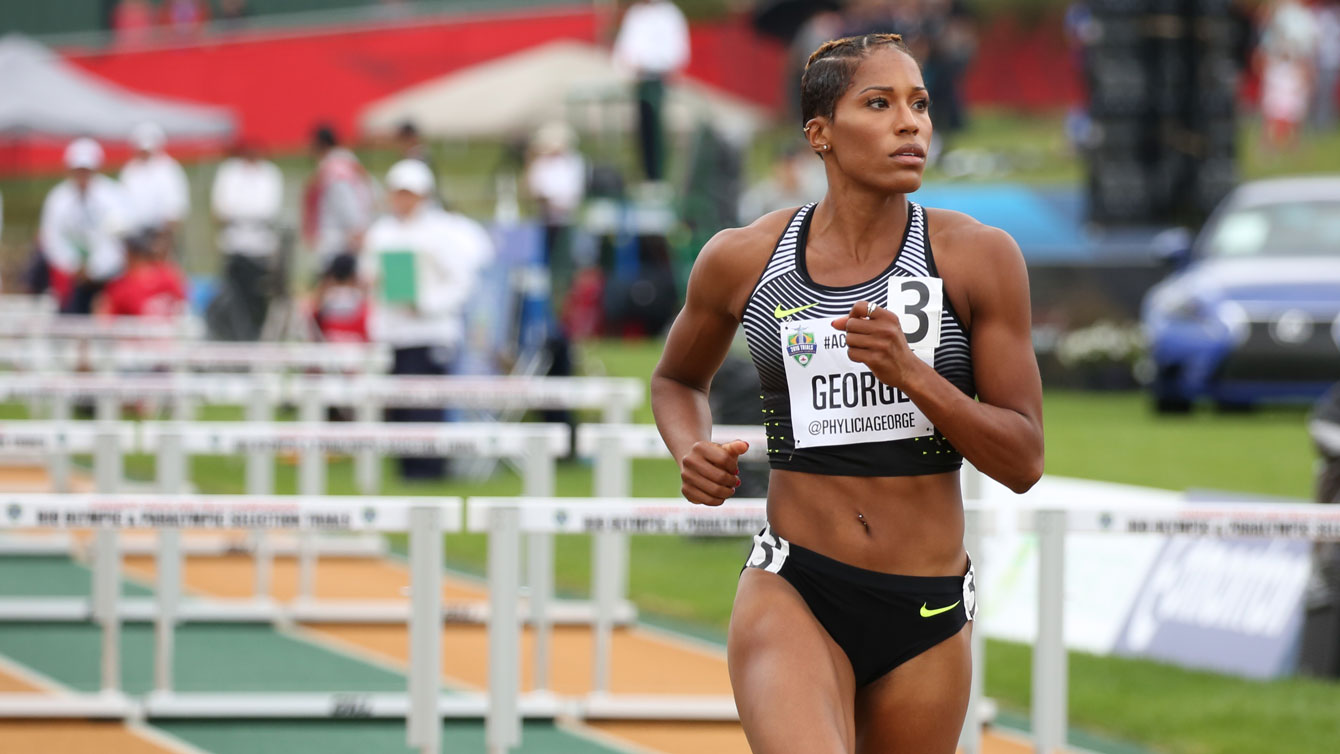 After finishing second in the 100m to Emmanuel on Saturday (and achieving Olympic standard in that event), Phylicia George made a claim to a second event in Rio by winning in the sprint hurdles.

George ran in 12.88 seconds, beating Nikkita Holder (12.94). Angela Whyte was third (13.06). All three are returning Olympians and while George and Holder are most likely to compete in hurdles, Athletics Canada will decide if Whyte’s “competitive readiness” merits an inclusion, as the organization will for all athletes that finish third. 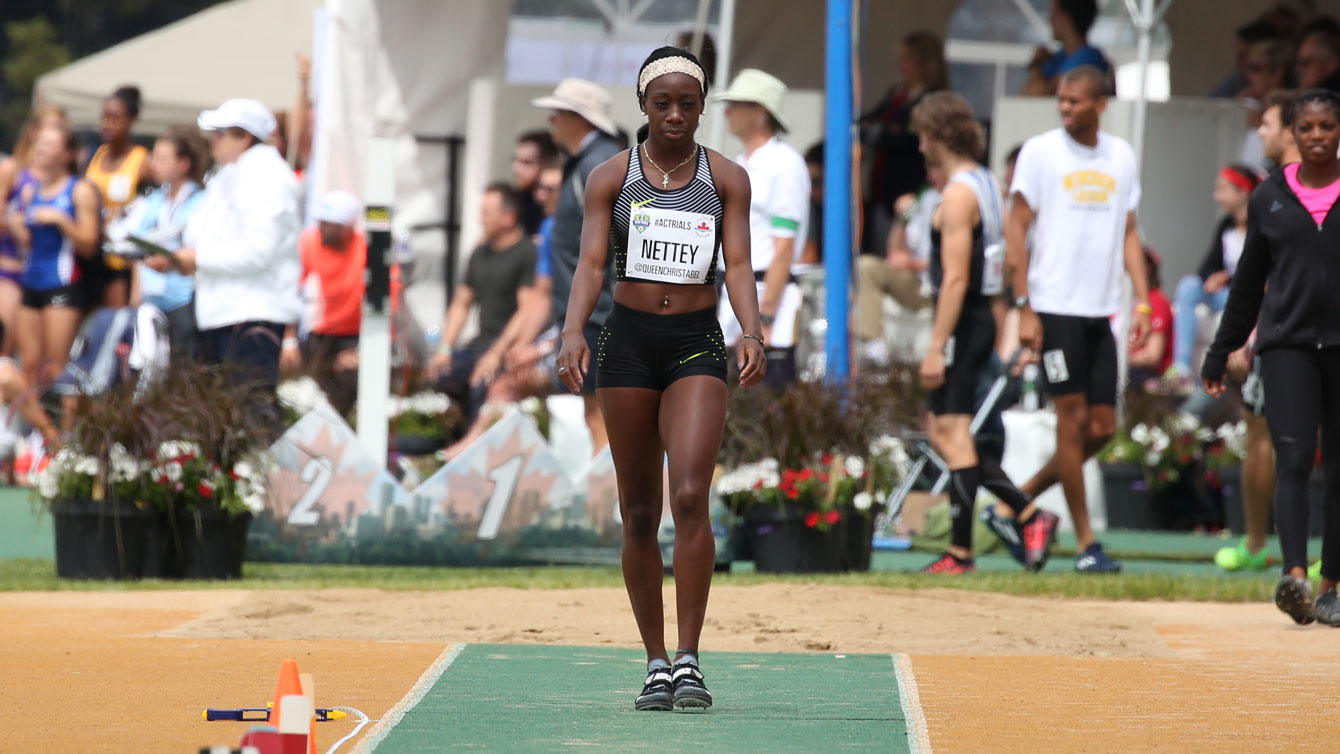 Christabel Nettey looks down the runway toward the long jump pit during Olympic trials on July 10, 2016.

After agonizingly missing the world championship podium by one place at Beijing 2015, Christabel Nettey will have a shot at redemption in Rio, qualifying to her first Olympic Games.

Nettey improved on each of her three attempts, her best jump coming at 6.62m after registering 6.59m and 6.29m in her previous leaps. Nettey was the only contestant with Olympic standard in women’s long jump. 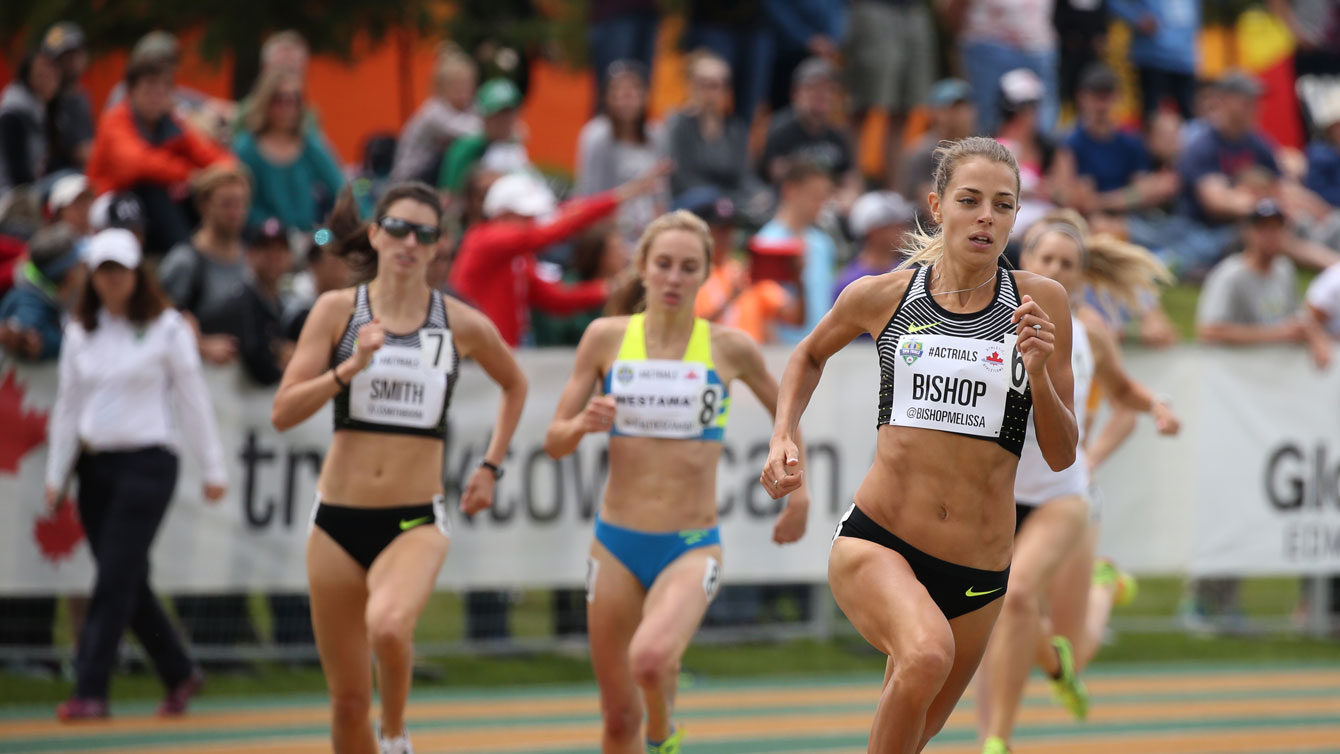 Melissa Bishop will be going to her second Olympic Games after the world silver medallist clearly bested the field in 1:59.32.

Jenna Westaway was second (2:03.39) and Jessica Smith (2:03.77) was third. Westaway does not have Olympic standard, but Smith does, which puts Athletics Canada’s national team committee in the picture as to whether the third place athlete heads to Rio as the second place medallist isn’t eligible. 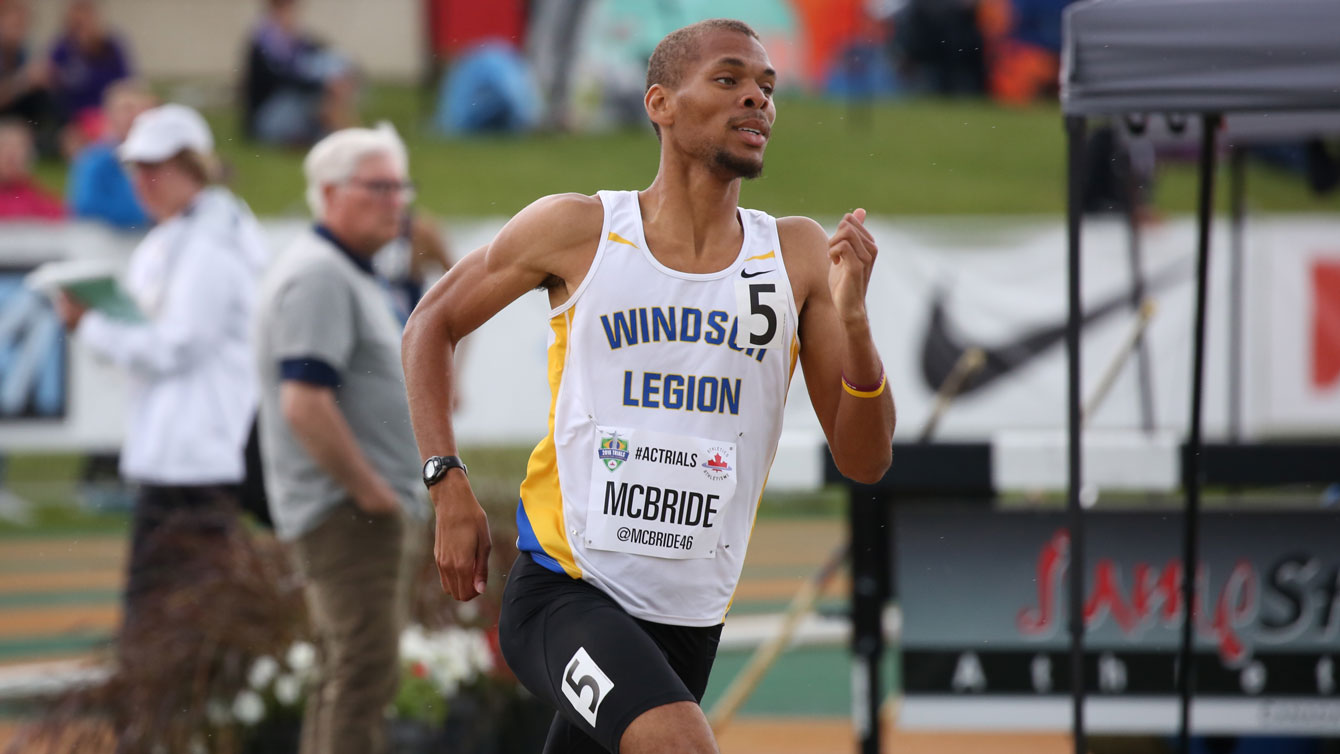 It was a benchmark day for Brandon McBride and Anthony Romaniw, who were the only two runners in this discipline with Olympic standard and finished one-two to book respective spots on the men’s 800m starting line in Rio. 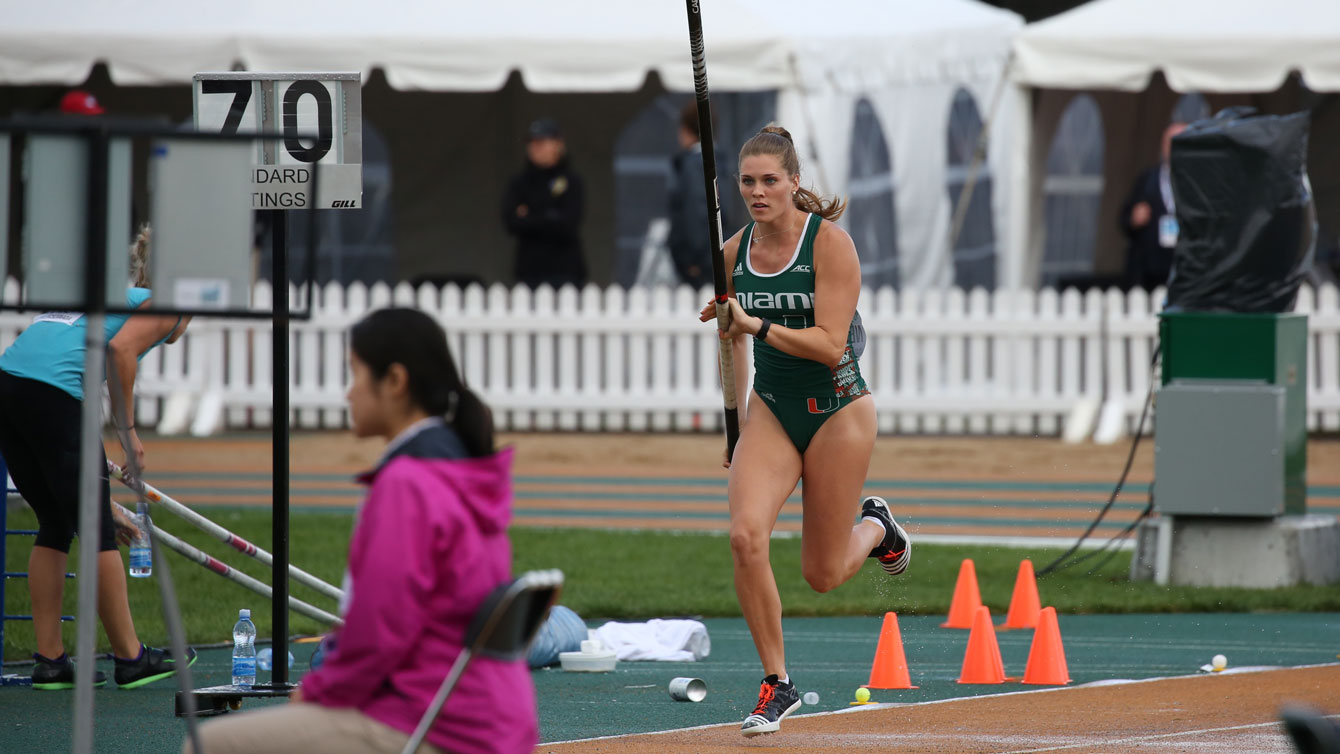 Alysha Newman takes off during pole vault final of Olympic trials on July 10, 2016.

All three had the requisite Olympic standard of 4.50m coming into Sunday’s trials. Although 4.40 by Newman was the winning height, it came through long rain delays and cooling temperature, putting the vaulters off their stride. 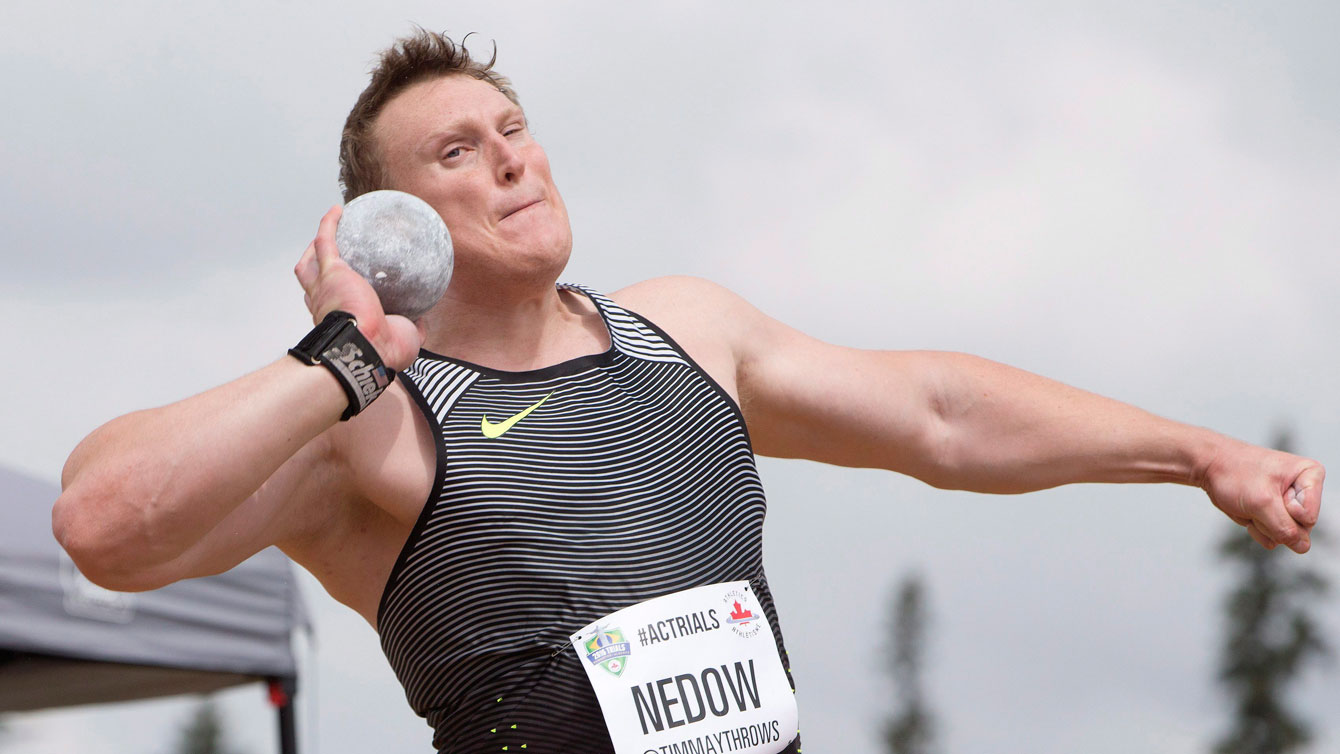 Tim Nedow just before throwing a shot put during Olympic trials on July 10, 2016.

TO2015 Pan Am silver medallist Tim Nedow will be going to his first Olympic Games, having won the shot put with a throw of 20.28m.

Nedow is the only Canadian male shot putter with standard for Rio.