10 incredible places around the world to go skating

10 incredible places around the world to go skating 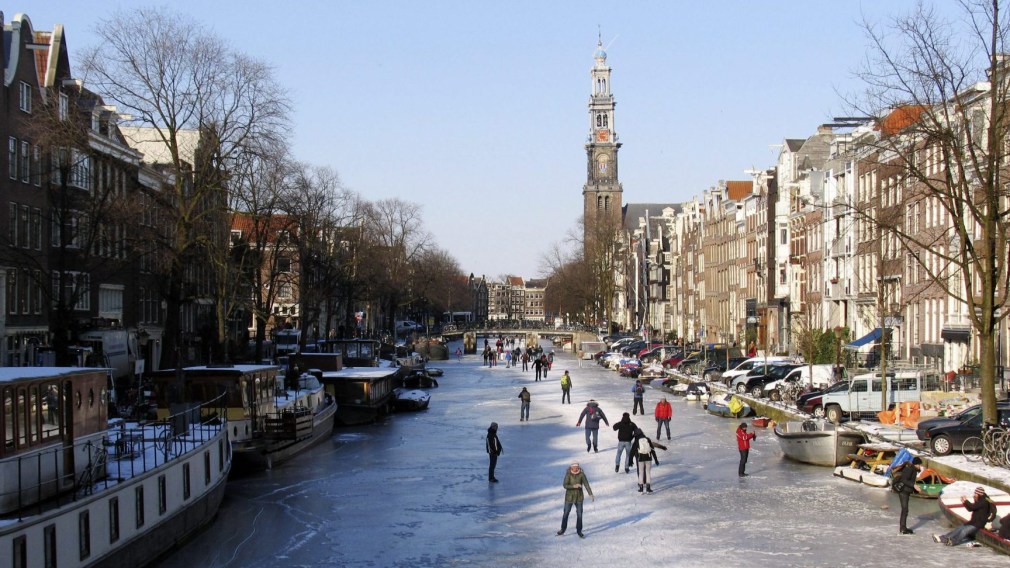 The cold weather may be here, but despite the snow and ice and everything not nice, we love this season.

Here are 10 incredible places across the globe to enjoy some winter fun on skates.

Every winter since 1970, the Rideau Canal has welcomed thousands of visitors from all over the world to come and skate. This UNESCO World Heritage site is the largest natural ice rink in the world with 7.8km of ice criss-crossing downtown Ottawa, for a total skating area of 165,621 square metres. This is the skating destination not to be missed.

Ice skating has been a tradition in Yosemite since the 1930s. Get your skates ready because the Curry Village ice skating rink is open for the season! #FlashBackFriday #Yosemite #NationalPark #YosemiteSnow

California is best known for warm weather, palm trees, and celebrities, but it is also home to some of the best snow and ice in the United States. Open since 1928, the Half Dome Village Ice Skating Rink in Yosemite National Park offers activities for all in the heart of nature in this beautiful corner of the country, including views of the spectacular granite rock formation that gives the rink its name. 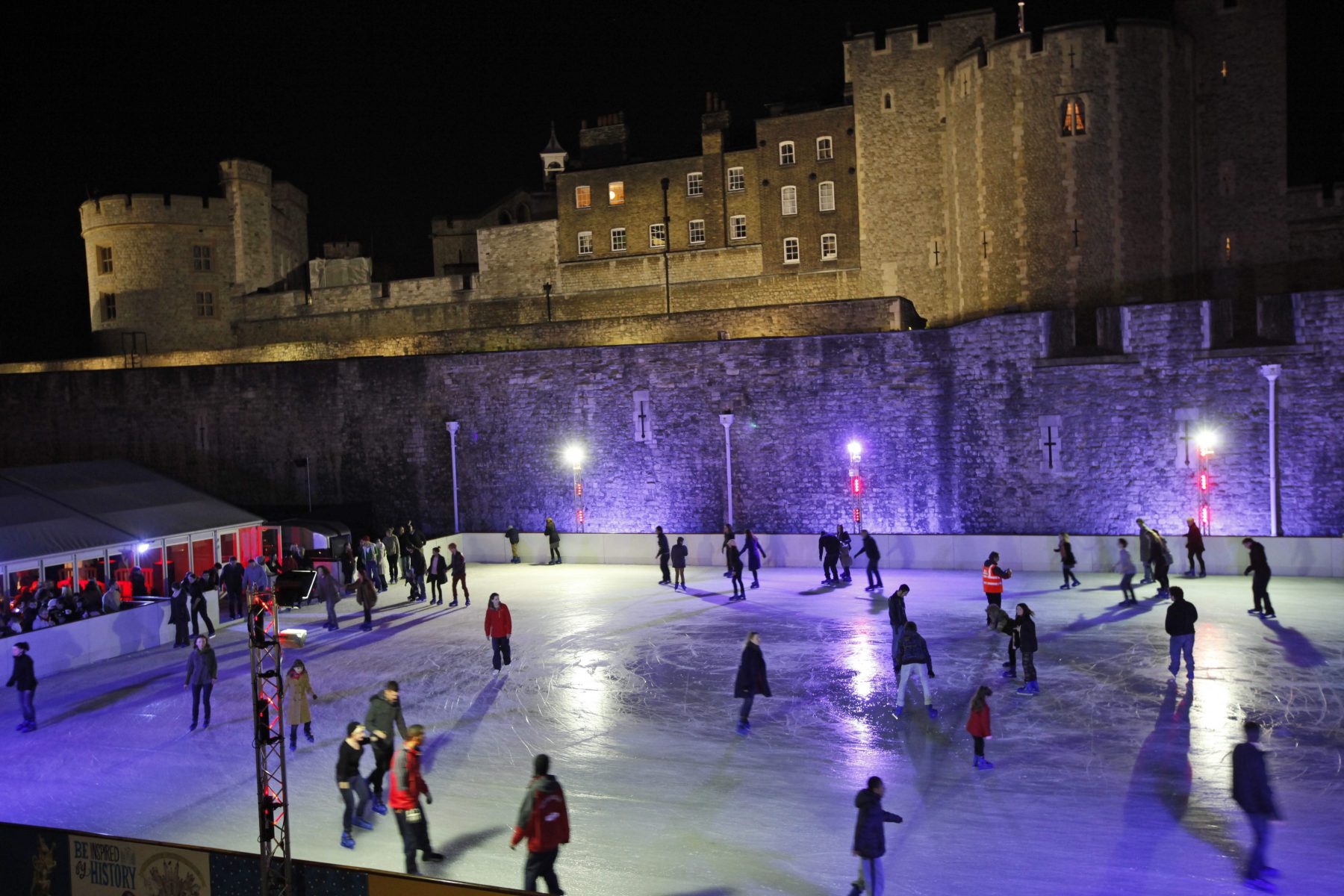 Skaters enjoy playing on the ice rink which has been set up in the moat area in the shadows of the iconic Tower of London, Friday, Nov. 18, 2011. The Tower of London has nearly one thousand years of history as a London fortress, and now plays host to modern families playing on the winter ice rink. (AP Photo/Lefteris Pitarakis)

The 1000-year-old home of the Crown Jewels provides an impressive backdrop as a modern ice rink is dropped into the dry moat of one of London’s most historic locales. Whether you’re looking for family fun or a romantic encounter, you’ll be transported to an era of legend, drama and royalty.

Nothing is more magical than being able to skate with the Victoria Glacier as a backdrop! Not to mention the fact that an ice castle is erected on the lake each winter to make the atmosphere even more enchanting. Take the opportunity to try the sport that made Canada famous on one of the ice hockey sections. Or be like Brian Orser and just skate free.

From January to March, the facade of City Hall becomes the illuminated backdrop of the Vienna Ice World. The atmosphere and décor of a fairy tale is the hallmark of this exceptional skating and curling venue. You do not have to be a great skater to feel like an ice princess.

The Weissensee Skating School offers all its figure skating and speed skating classes on this natural ice rink. If you dream of becoming the next Kaetlyn Osmond or transforming yourself into Ted-Jan Bloemen for a day, this is your chance. In addition to 25km of circular skating tracks and a 400m oval for speed skaters, there are pond hockey rinks and curling sheets. 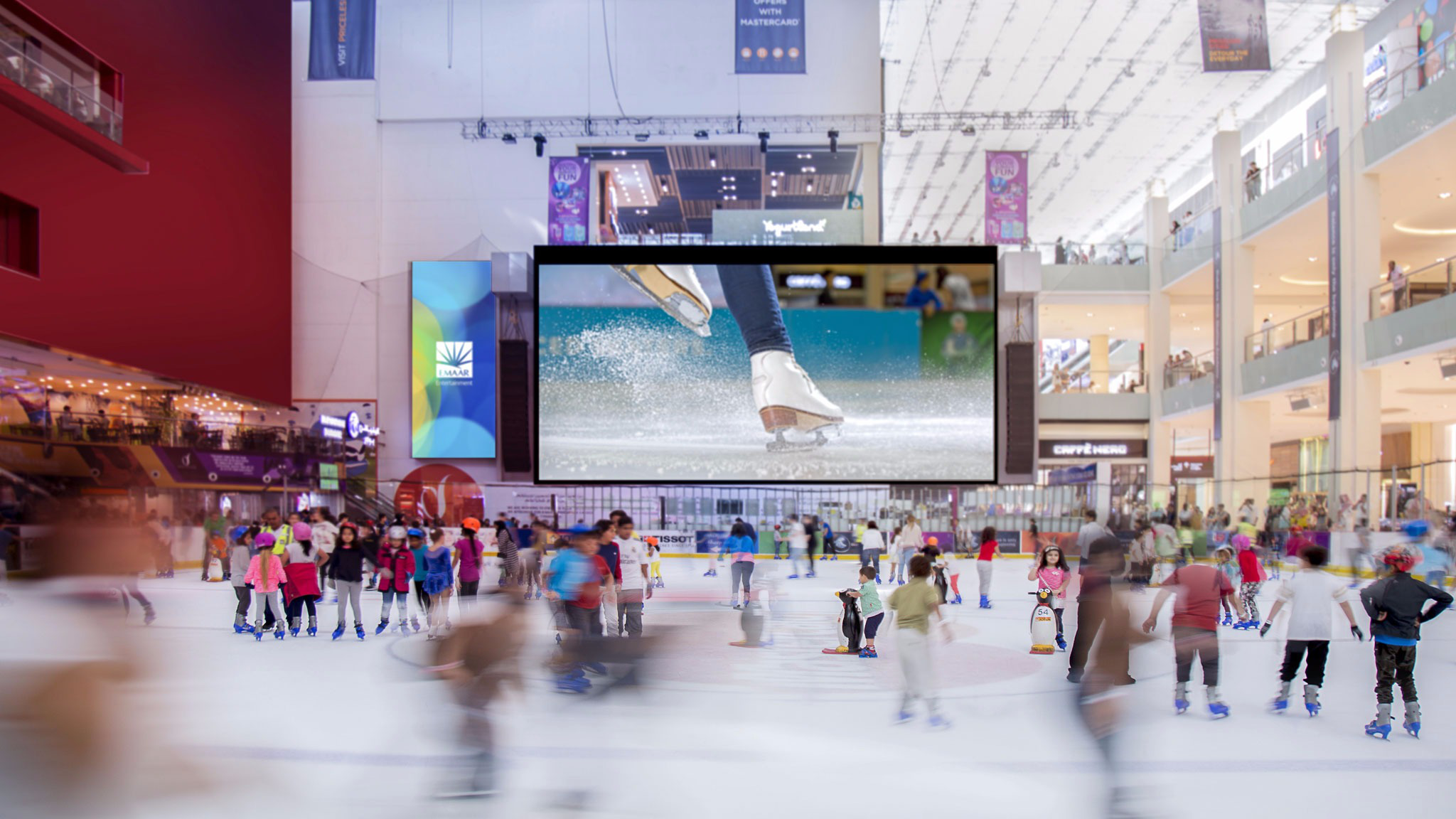 Take a break from the desert and intense heat as you cool off on the Olympic-sized indoor ice rink, open year-round. Dubai impresses us once again with their total commitment to outrageous projects. 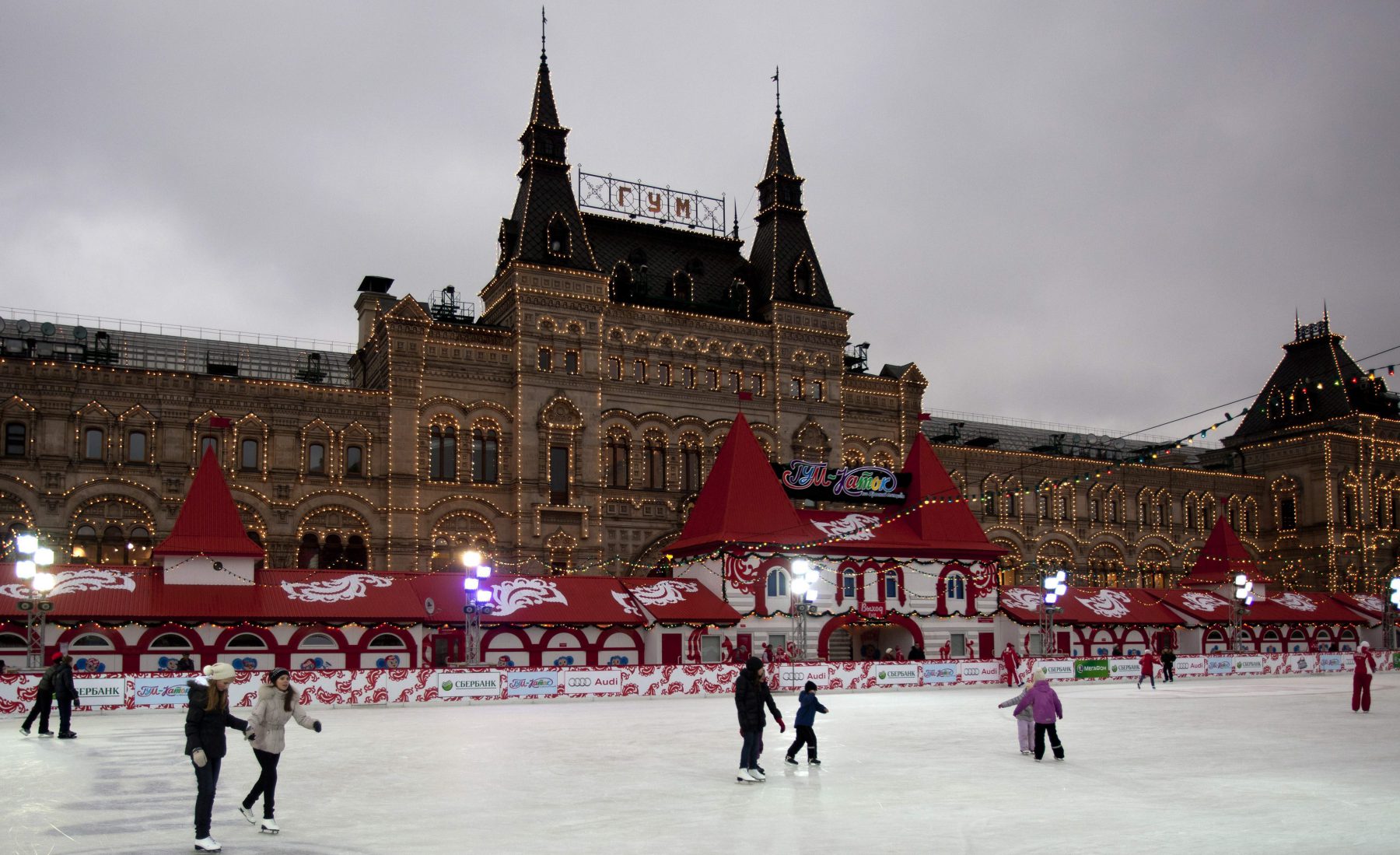 People skate on the ice rink opened on Red Square, with the building of the State Department Store in the background in Moscow, Russia, Saturday, Dec. 3, 2011. (AP Photo/Misha Japaridze)

Red Square is considered by many as the place par excellence to live the magic of Christmas. Located in the heart of the Russian capital, the 3000 square metre ice rink is built near the illuminated GUM shopping mall. Nearly 56,000 visitors skate on the rink each year, taking in the view of St. Basil’s Cathedral.

For many, this is probably the best-known rink in North America. This reputation is based mainly on the location of this rink. Remember that Rockefeller Center is one of the most popular attractions of the Big Apple in both summer and winter. The highlight at Christmas is the 80-foot tree that is placed to overlook the rink. 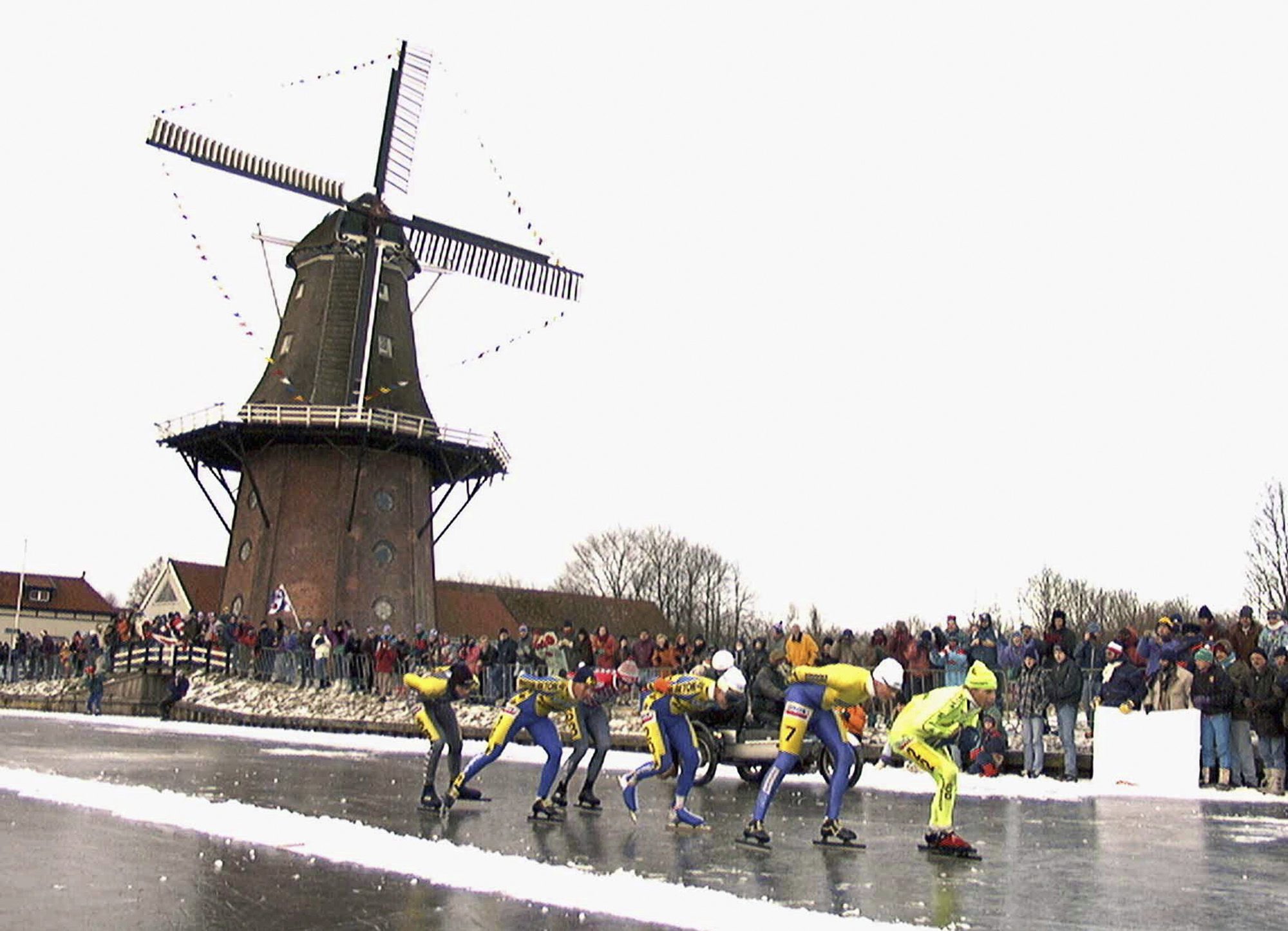 In this Jan. 4, 1997, file photo, skaters pass a windmill as some 16,000 people participate in the historic 200km skating spectacle the ‘Elfstedentocht’ (eleven-cities-course) in Birdaard, province of Friesland, northern Netherlands. There is nothing more mythical in Dutch sports than an age-old 11-city race skating across lakes and canals in bone-numbing cold from dawn to dusk. (AP Photo/Dimitri Georganas, File)

The Eleven Cities Tour is the largest ice skating tour in the world, covering 200km of frozen waterways. But it is a rarity. Although the first Elfstedentocht took place in 1909, it has only occurred 15 times in history, most recently in 1997. You see, the ice needs to be at least 15cm thick. So every year when the frost sets in, the Dutch hope that this is the year that the cold is cold enough for the ice to safely accommodate more than 15,000 skaters. In 1986, King Willem-Alexander, then the 18-year-old Crown Prince, began the tour registered under a pseudonym. A 10-day cold spell in 2012 prompted preparations and snow was shoveled from canals by volunteers and soldiers, but the race was ultimately called off.