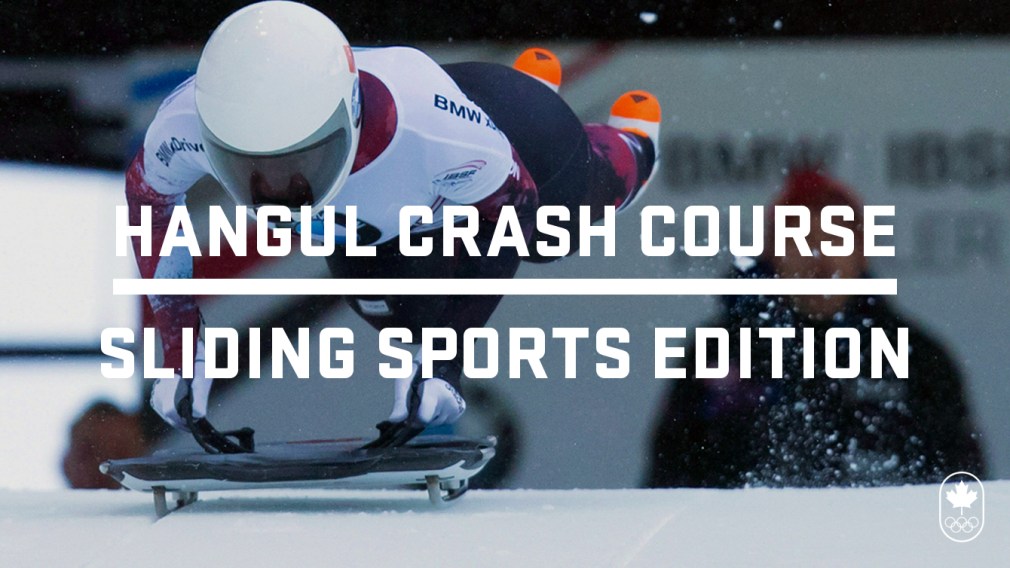 Sliding sports were born in Europe in the late 1800s, when tourists began racing sleds down frozen tracks at alpine resorts.

Four-man bobsleigh (봅슬레이) [bob-sue-llei] was part of the first Olympic Winter Games at Chamonix 1924 before the two-man event joined the program at Lake Placid 1932. Luge (루지) [luji] was first contested at Innsbruck 1964. Skeleton (스켈레톤) [seu-ke-lle-ton] was contested at St. Moritz 1928 and 1948 before being permanently added to the program at Salt Lake City 2002 where women’s bobsleigh debuted.

Get to know your sliding sports jargon and some Korean hangul and be ready to support the Canadian sliders as they race down the ice track (아이스트랙) [aiseu-teu-raek] at the Olympic Sliding Centre. 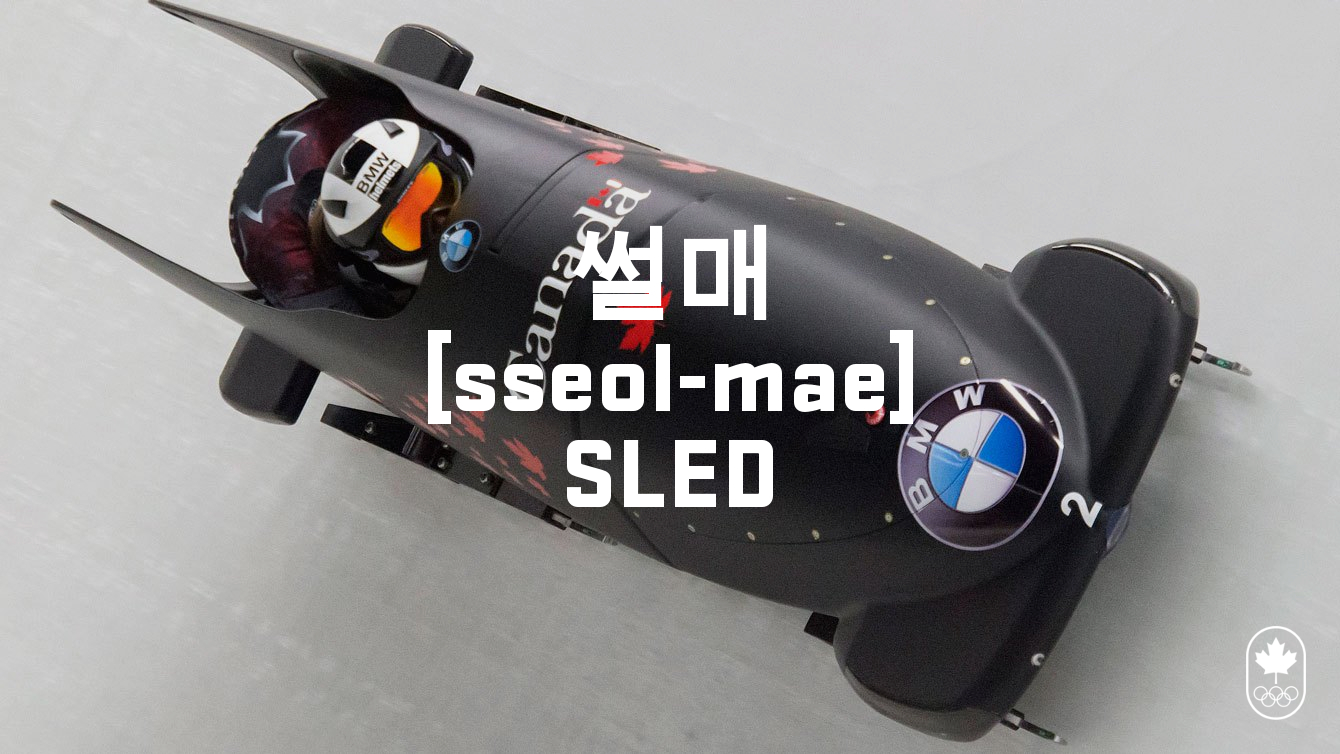 The most important piece of equipment in any sliding event is the sled on which athletes will slide down the track. Different sliding sports use sleds of different shapes and sizes. Four-man bobsleighs can be up to 3.8m long and weigh as much as 630kg when full, while skeleton sleds can be a mere 80cm long and luge sleds weigh as little as 23kg. 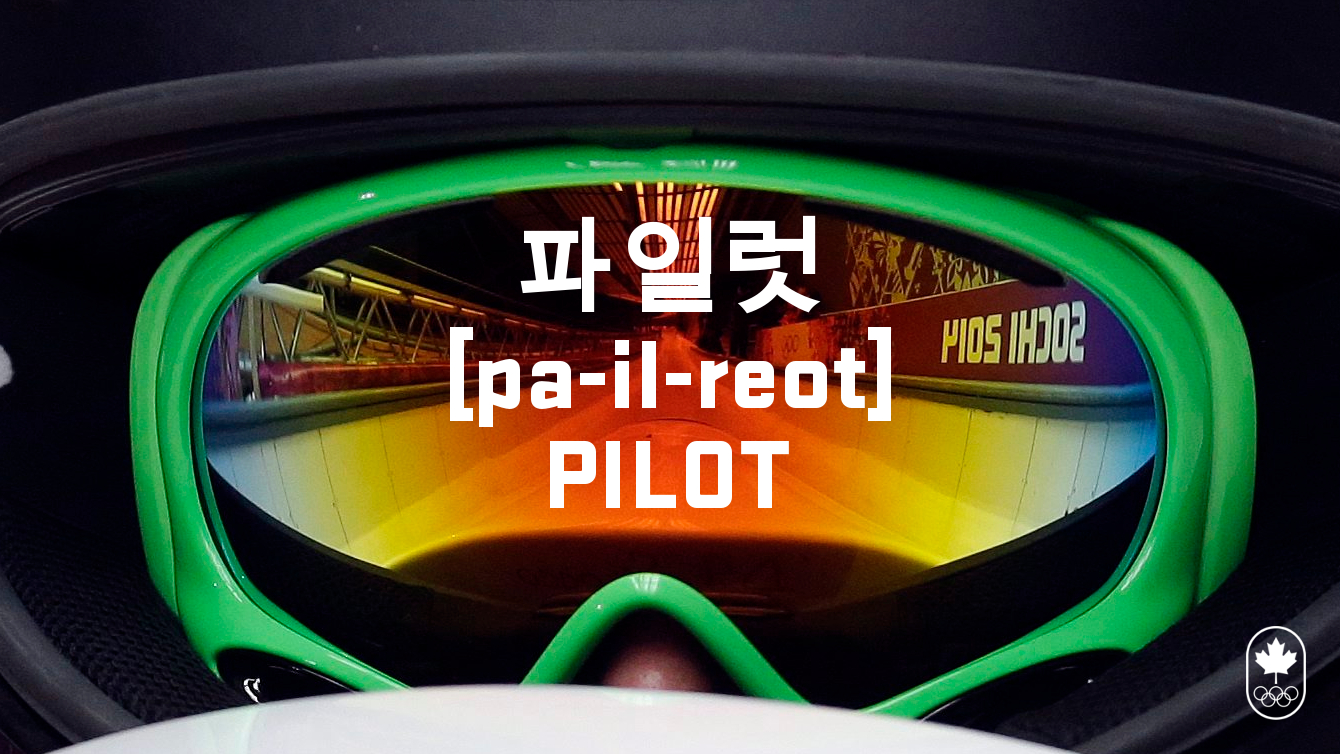 The front rider in a bobsleigh, the pilot is responsible for knowing every inch of every track they race. By gently pulling on a pair of D-rings at the front of the sled, they can turn their sled to achieve the best possible path down the track. 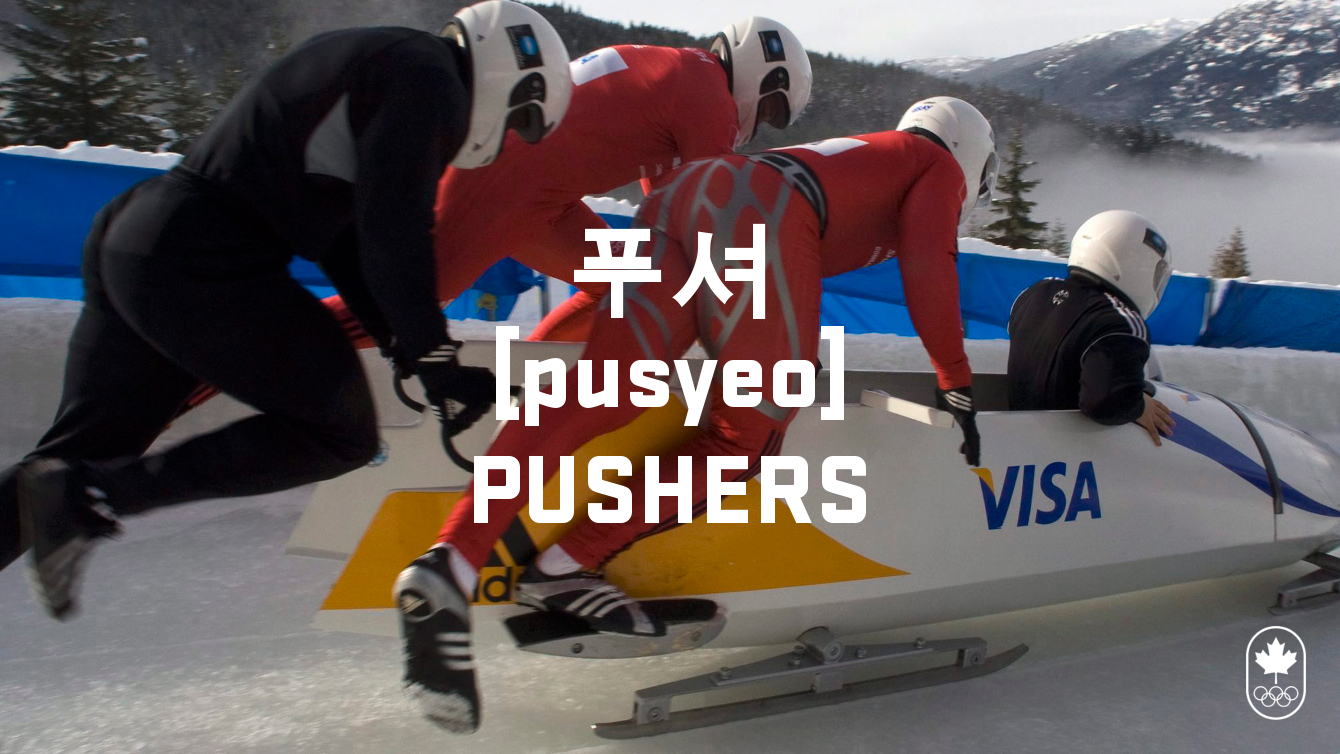 The two middle members of a four-man bobsleigh team. The pushers job is to push the sled as fast as they can for the first 50 metres before jumping in and enjoying the ride down the track. The best teams can push their sled through the 50m start in less than 5 seconds.

The backmost position in the bobsleigh team. In addition to pushing the sled at the start, the brakeman is responsible for stopping the sled by pulling a lever that activates a set of metal treads that grab into the ice, halting momentum at the end of the track. 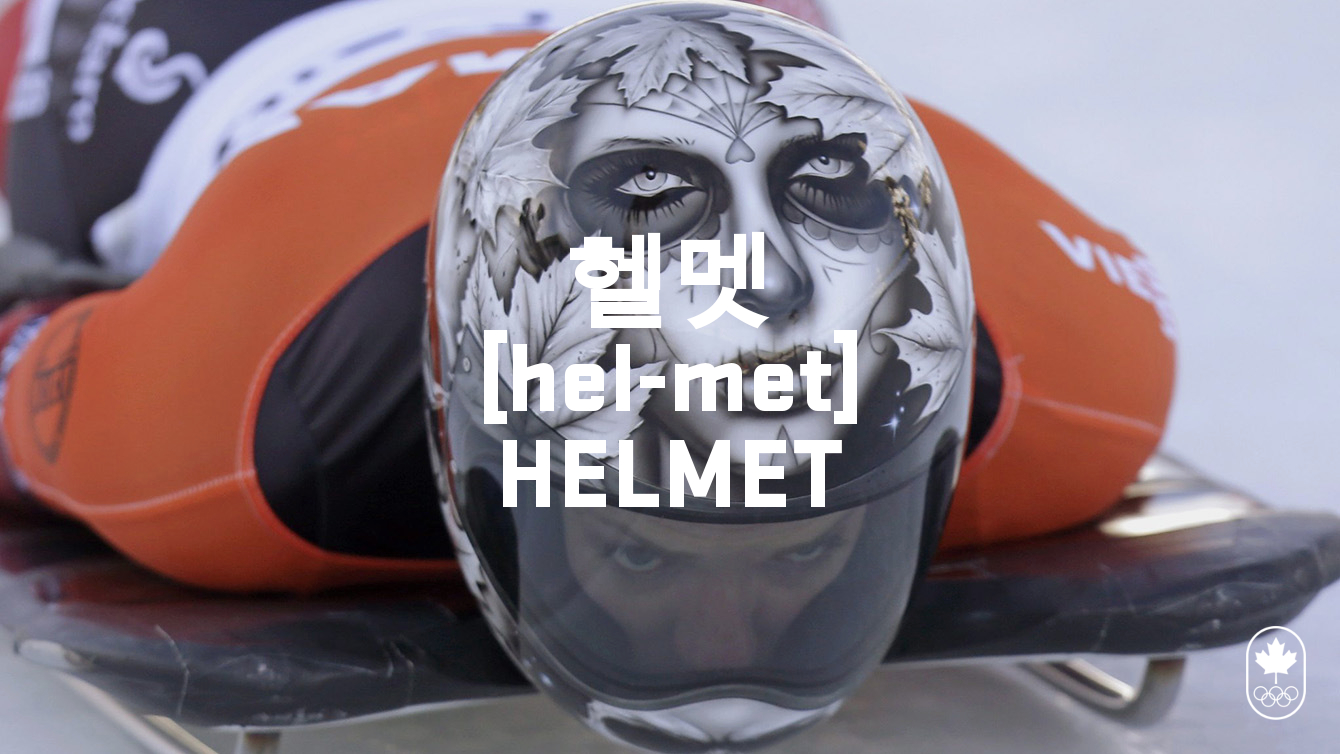 Riding down an ice track at over 100km/h can be extremely dangerous. Thus, competitors are required to wear helmets to protect their heads in the event of a crash. The helmets, made of fiberglass, carbon fiber, and padding, are similar in design to motorcycle helmets. Some skeleton racers paint elaborate designs on the front of their helmets, like how hockey goalies design their masks.

There are very specific rules about how heavy sleds can be and breaking them is grounds for disqualification. To make sure nobody is cheating, sleds are weighed before and after every run. Aya Yasuda of Japan was disqualified following the first run of women’s luge at Vancouver 2010 when her sled weighed in 200 grams above the allowable limit. 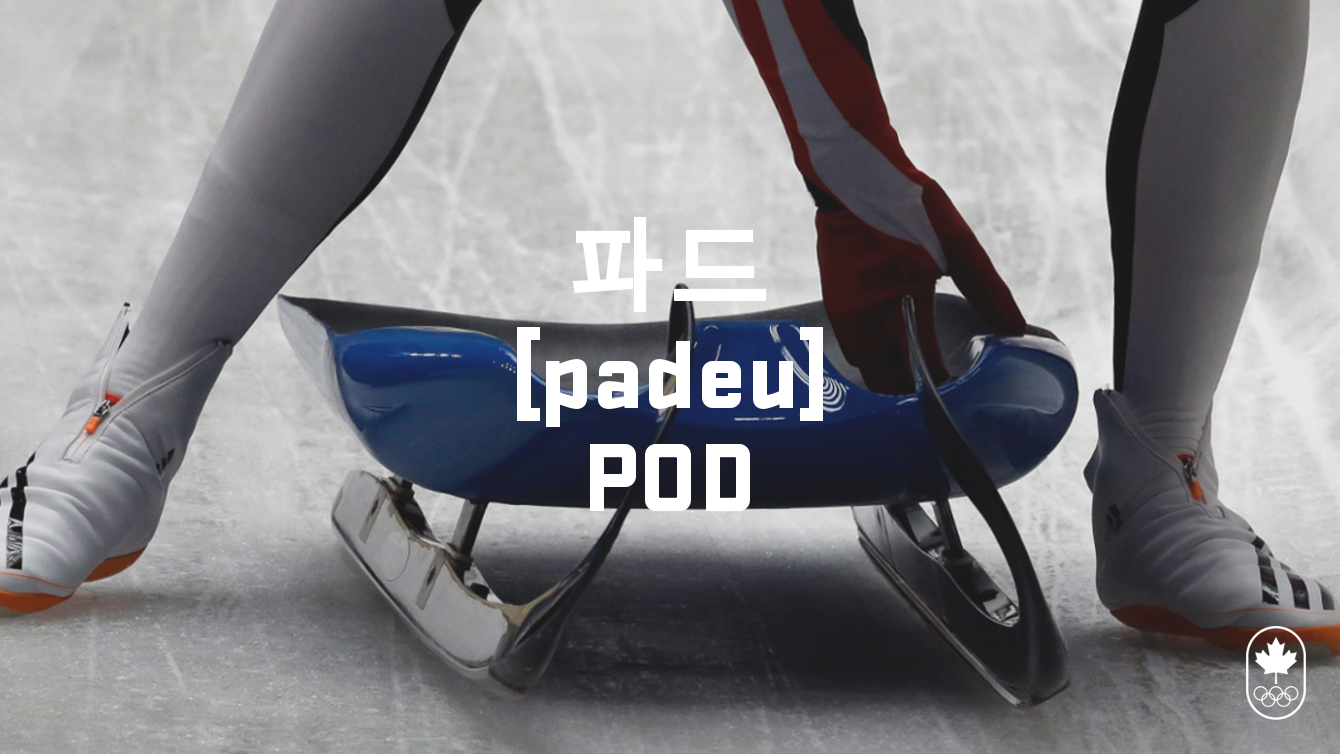 Lugers lie in a cradle slightly above the runners and steels of their sled. This pod helps to support the luger’s body from the shoulders to the front edge of their knee cap, but they must support their own head and rest their feet on the lower portion of the runners. 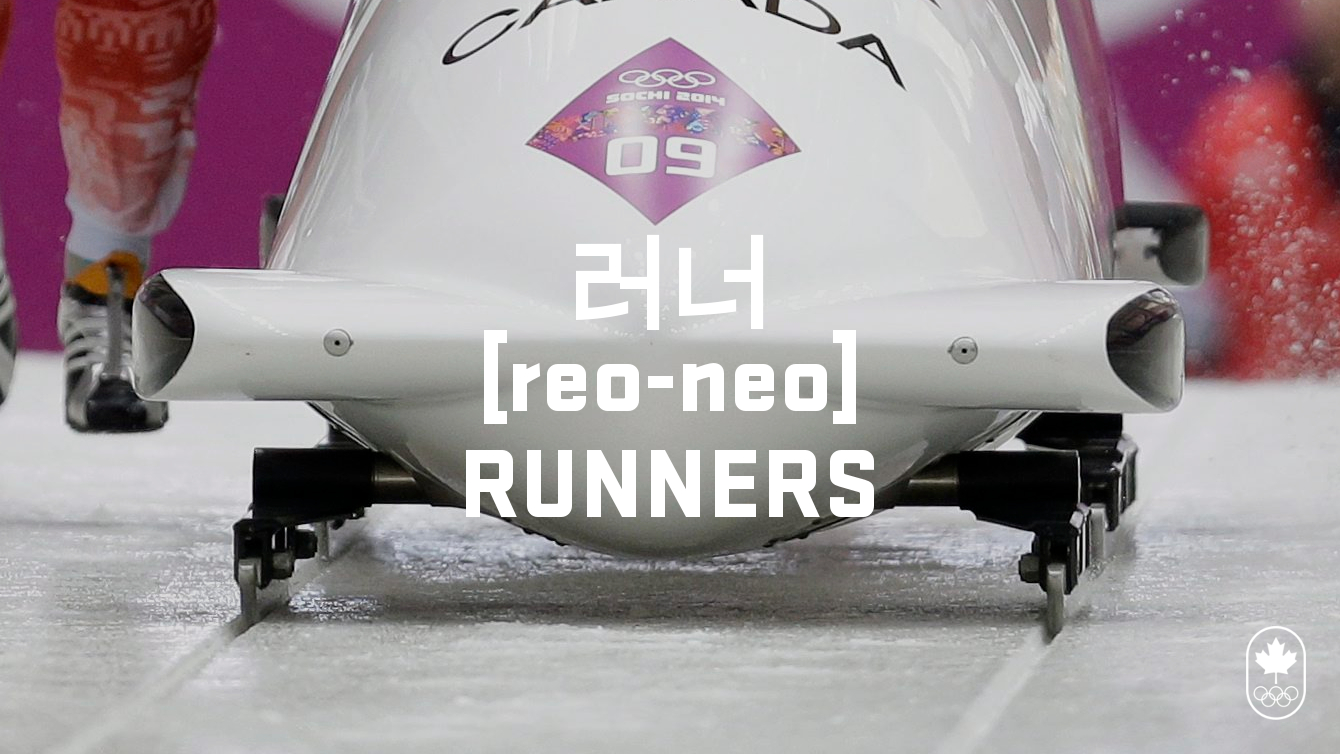 In bobsleigh and skeleton, runners are the flat metal sliders that contact the ice track, polished to a near mirror finish to minimize friction. In luge, the runner is a section of fiberglass attached to the sled that extend into curved bows at the end. 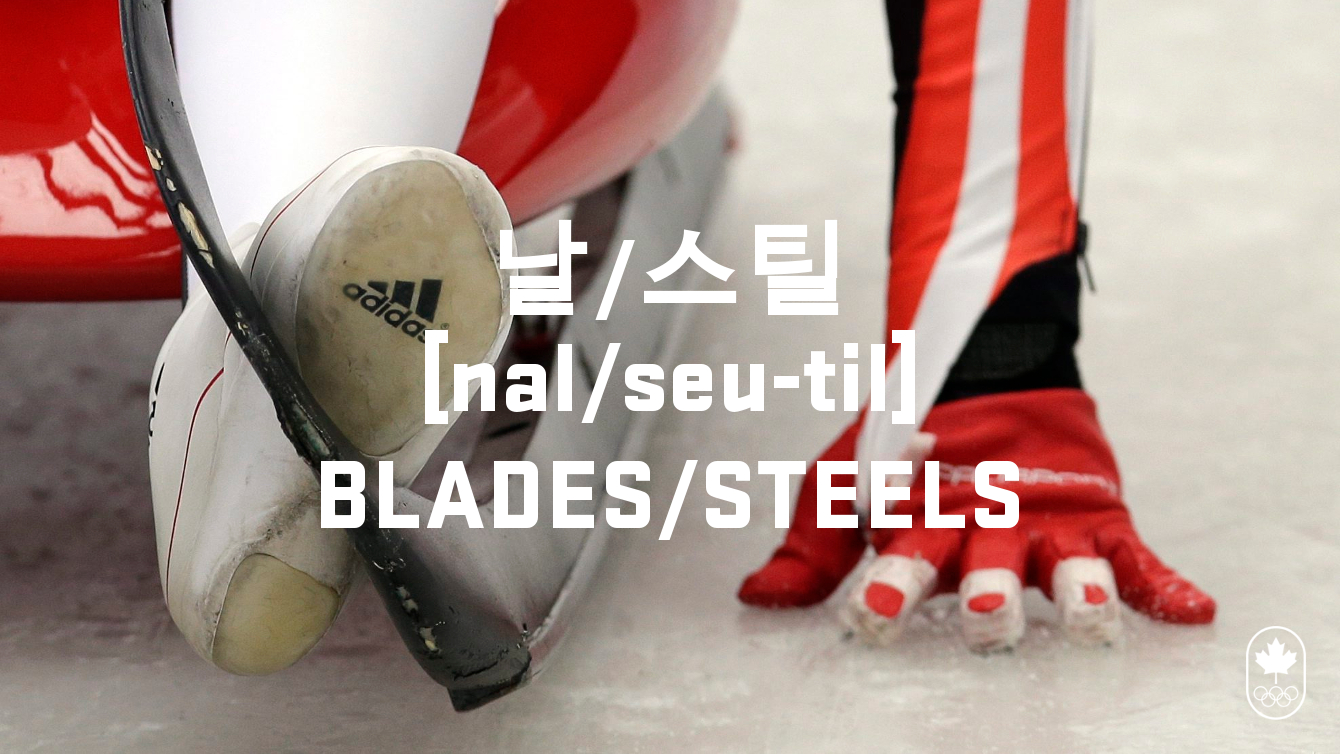 Blades, or steels, are extremely sharp pieces of metal and the only part of a luge sled that touches the track. Like runners in bobsleigh and skeleton, luge steels must have their temperature measured before each run to ensure they are not heated, which would provide an unfair advantage.

During the sliding sports competitions at the Olympic Sliding Centre, athletes will reach speeds greater than 120km/h, taking turns as steep as 25 degrees. Due to the high speeds and rapid change of direction, they are pushed down into their sleds at more than four times the normal force of gravity, or 4 Gs, during their minute-long run. You can approximate the G-forces felt by bobsledders for several seconds by riding down the first drop of an extremely fast roller coaster. 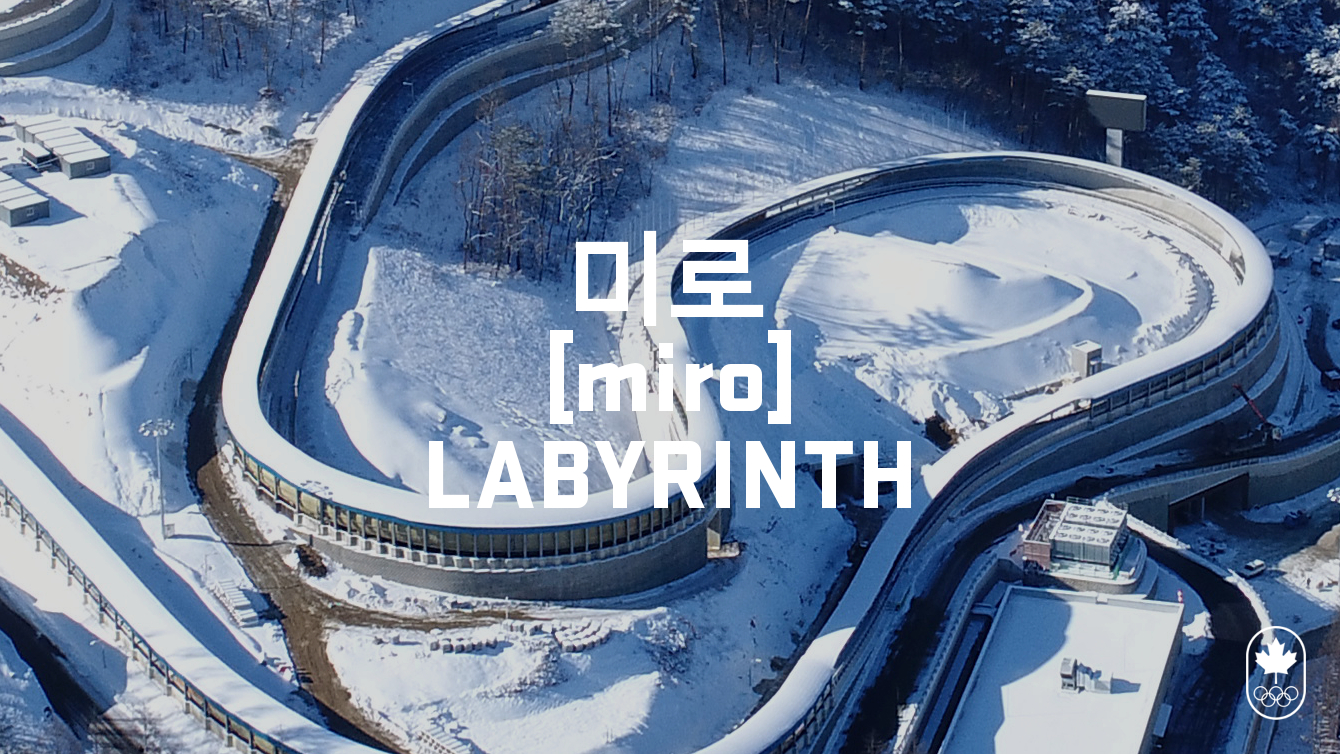 A series of three or more curves without a straightaway in-between, this section of track is designed to test athletes’ reflexes and technical skills. One of the most notorious labyrinth sections on the World Cup circuits is Gold Rush Trail at the Whistler Sliding Centre, named because a mistake could cost competitors a chance at Olympic gold.

A poor start doesn’t mean that your favourite racer is out of the competition. To help ensure that random chance plays as small a part as possible in deciding races, each sled takes multiple runs down the track, and their combined time determines the winner.