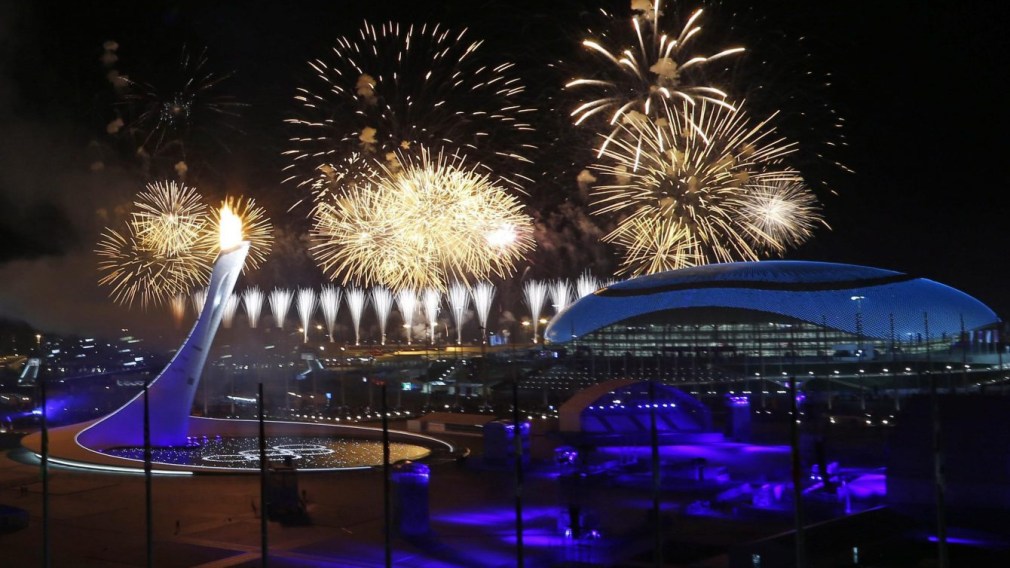 On February 9, the world will tune in to watch the PyeongChang 2018 Opening Ceremony.

The PyeongChang 2018 ceremony will be directed by Song Seung-whan, best known as the creator of “Nanta”, the longest-running theatrical production in Korean history. The ceremony will be hosted at the PyeongChang Olympic Stadium and, as has become tradition, showcase many aspects of the host nation’s history and culture.

With the show on the horizon, let’s look back at some of the most memorable moments from the last five Opening Ceremonies of the Olympic Winter Games. 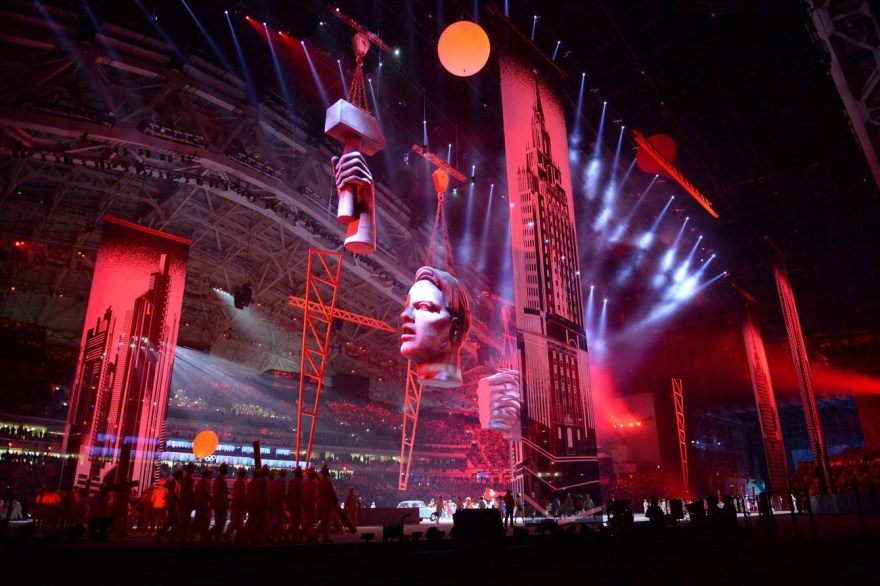 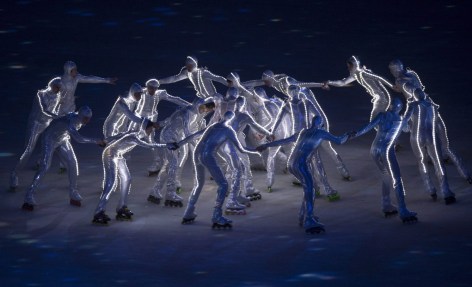 Characters perform during the opening ceremony of the 2014 Winter Olympics in Sochi, Russia, Friday, Feb. 7, 2014. THE CANADIAN PRESS/Paul Chiasson 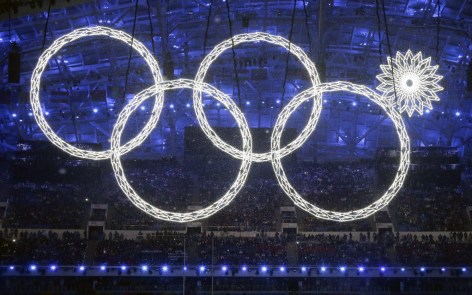 One of the rings forming the Olympic Rings fails to open during the opening ceremony of the 2014 Winter Olympics in Sochi, Russia, Friday, Feb. 7, 2014. (AP Photo/Mark Humphrey) 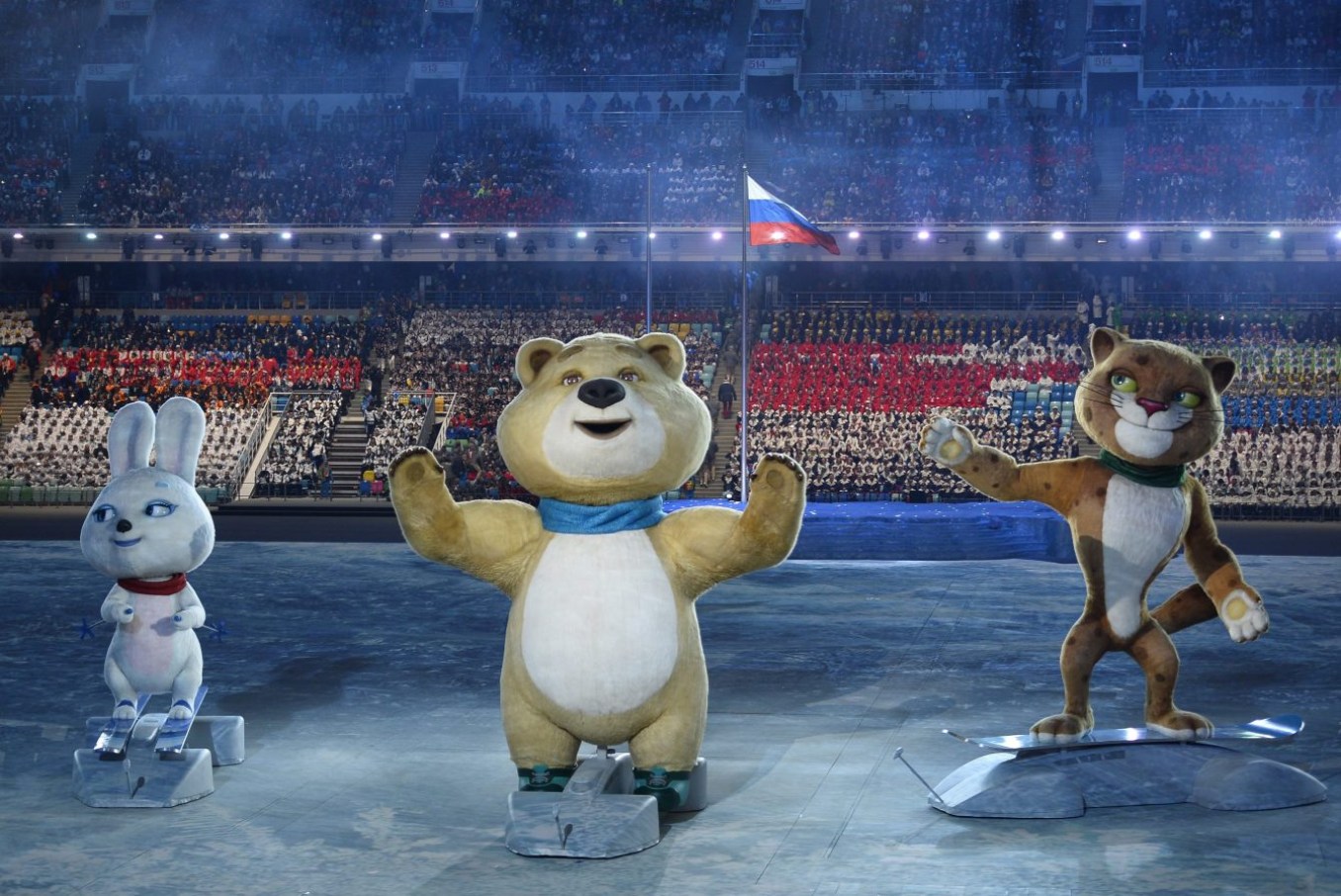 Sochi’s large-scale spectacle, titled “Power to the People”, featured more than 3000 performers and 2000 volunteers. Tributes to Russia’s long history included an inflatable St. Basil’s Cathedral, the army of Czar Peter the Great taking to the floor, a giant moving replica of the statue “Worker and Kolkhoz Woman”, and a performance from “Swan Lake”. Not everything went according to plan, as midway through the performance a set of giant snowflakes which were supposed to unfurl to form the Olympic Rings malfunctioned, leaving four rings and a giant snowflake suspended in midair. Nearly all the action was set to the music of famous Russian composers such as Tchaikovsky, Stravinsky, and Prokoviev.

Vancouver’s Opening Ceremony had the distinction of being the first to ever take place indoors. Hosted at the domed BC Place, the ceremony kicked off with a bang, as snowboarder Johnny Lyall jumped through a set of Olympic rings as snow and ice exploded into the crowd. Original music by Bryan Adams, Nelly Furtado, Dave Pearce, Gavin Greenaway, and Donovan Seidle was played live by an orchestra on the stadium floor. The cultural section “Landscape of a Dream” was narrated by star of stage and screen Donald Sutherland and featured representations of all the regions of Canada, including a giant Kermode bear, a fiddle duel, aerialists dressed as snowboarders, a k.d. lang performance of Leonard Cohen’s “Hallelujah”, and a reading of “We are More” by slam poet Shane Koyczan. The ceremony was capped off by Wayne Gretzky, Catriona Le May Doan, Steve Nash, and Nancy Greene lighting the Olympic cauldron inside the stadium.

“Passion Lives Here” was the theme in Turin. To start the show, Olympic champion gymnast Juri Chechi struck a flaming anvil, symbolizing the Piedmont region’s industrial past, which set off jets of flame around the stadium and was followed by groups of inline skaters executing formations in flaming costumes. Performances included tributes to the Alps, complete with life-sized pine trees, and waltzing performers dressed as cows. In a tribute to Italian contributions to the Renaissance and Baroque art scene, there were scenes from Dante’s Divine Comedy and a tableau from the Birth of Venus. A segment that focused on the future included a Ferrari F1 car, painted with the Italian tricolore and the Olympic rings, doing donuts on the stadium floor. The ceremony concluded with the last ever public performance from famed Italian tenor Luciano Pavarotti, singing his trademark aria Nessun Dorma from the opera Turandot, which earned him the longest ovation of the night. 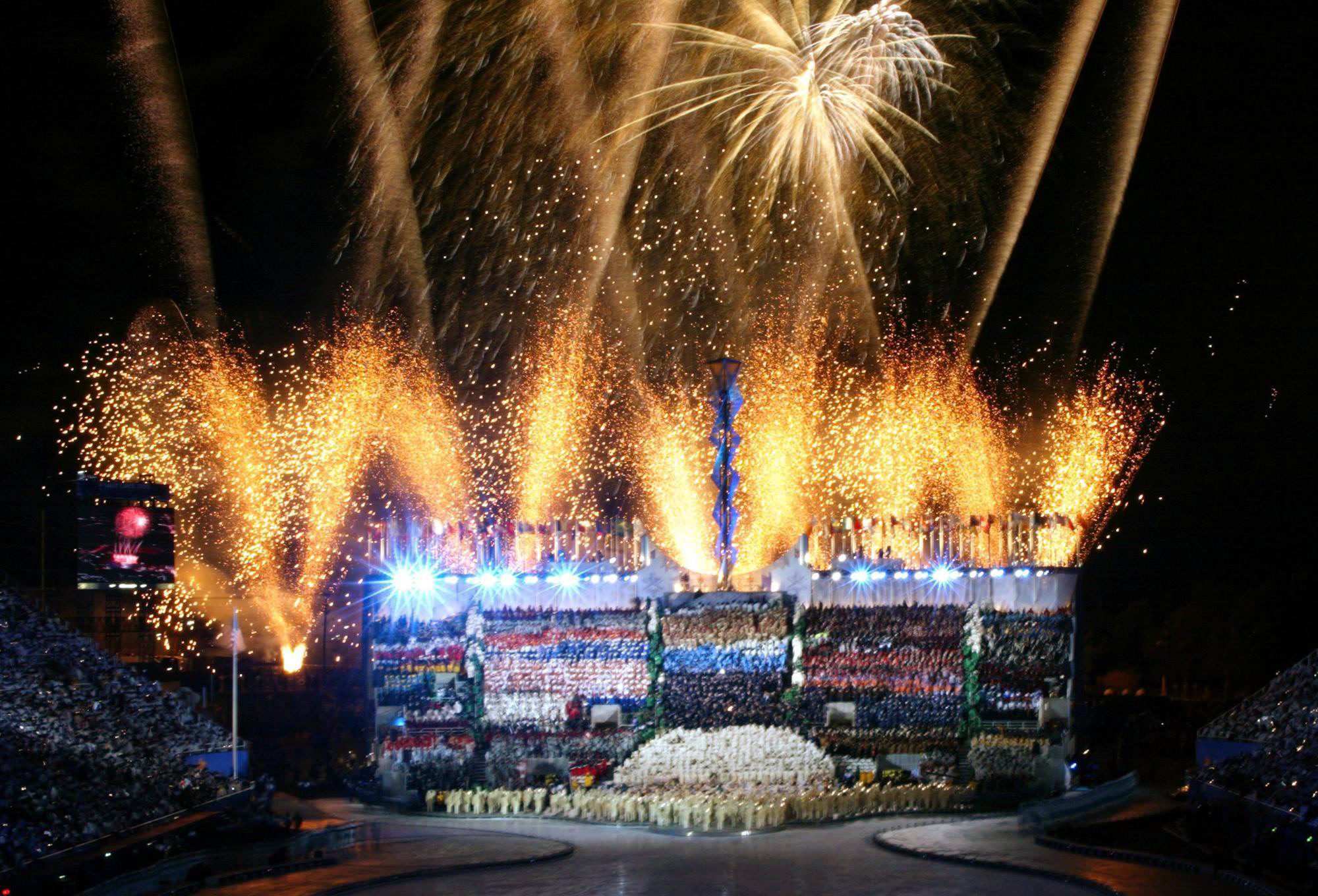 Less than five months after the events of September 11, the Salt Lake City Opening Ceremony faced the problem of how to properly and tastefully address what had happened. In a touching moment early in the proceedings, an American flag recovered from Ground Zero was carried into the stadium by athletes and first responders while the Mormon Tabernacle Choir sang the Star-Spangled Banner. The performances featured “Welcome” stomp dances by local native tribes, LeAnn Rimes singing the official song of the Games “Light the Fire Within”, an original orchestral piece written by John Williams and performed by the Utah Symphony Orchestra, 15-foot bison and bald eagle puppets, and Olympic champion figure skaters Kristi Yamaguchi and Scott Hamilton performing on an outdoor rink built specially for the ceremony. President George W. Bush broke with the tradition of opening the Games from an official box, instead standing among the U.S. athletes.

The Nagano Opening Ceremony began with the ringing of a 400-year-old bell at Zenkoji Temple, a Buddhist temple central to Nagano prefecture and Japan. Traditional Japanese purification rituals were incorporated into the performances. In a thousand-year-old tradition, eight onbashira log pillars were rolled into the stadium to purify the land. In the sumo tradition, Yokozuna Akebono performed the dohyo-iri ring purification ceremony to expel evil spirits from the competition venues. In a spectacular grand finale, Seiji Ozawa utilized then-cutting-edge satellite technology to direct a 2000-piece string chorus at the stadium along with performers in Berlin, Cape Town, Beijing, New York, and Sydney, in a performance of Beethoven’s “Ode to Joy”.