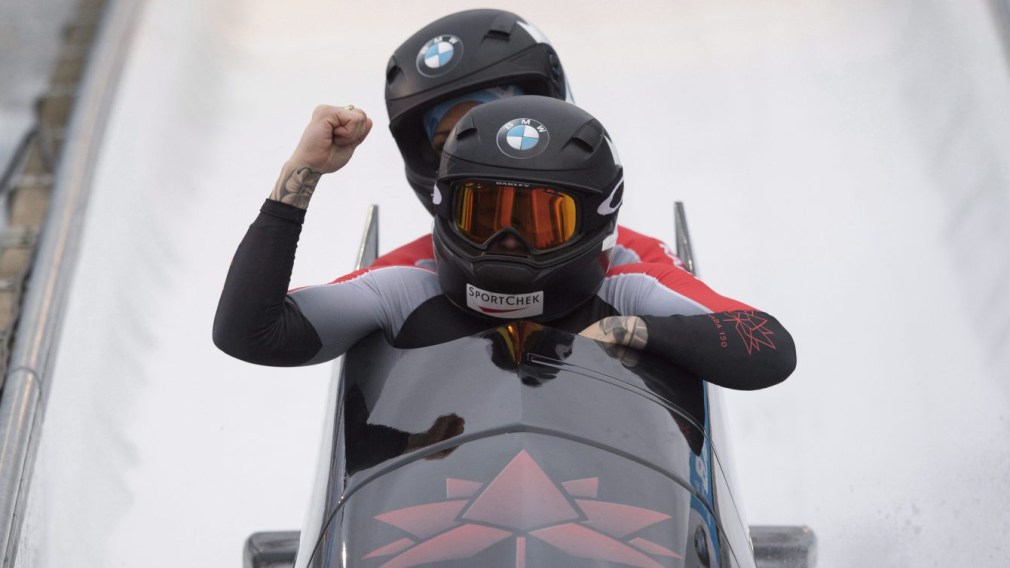 If you think it’s tough to become an Olympic athlete in one event (and it is!), just imagine reaching that level in two different events over two different Games.

But that’s more than a dream; it’s the reality for a number of athletes who are competing for Canada at  PyeongChang 2018. Two of them, Phylicia George and Seyi Smith, made the jump from track and field to bobsleigh—and both got a rude awakening when transitioning to their new sport.

“I was one of those people who thought I could sort of walk on and continue doing what I was doing before,” says Smith, who competed in the 4 x 100m relay at London 2012. “The overlap between track and bobsled isn’t as much as people think.” 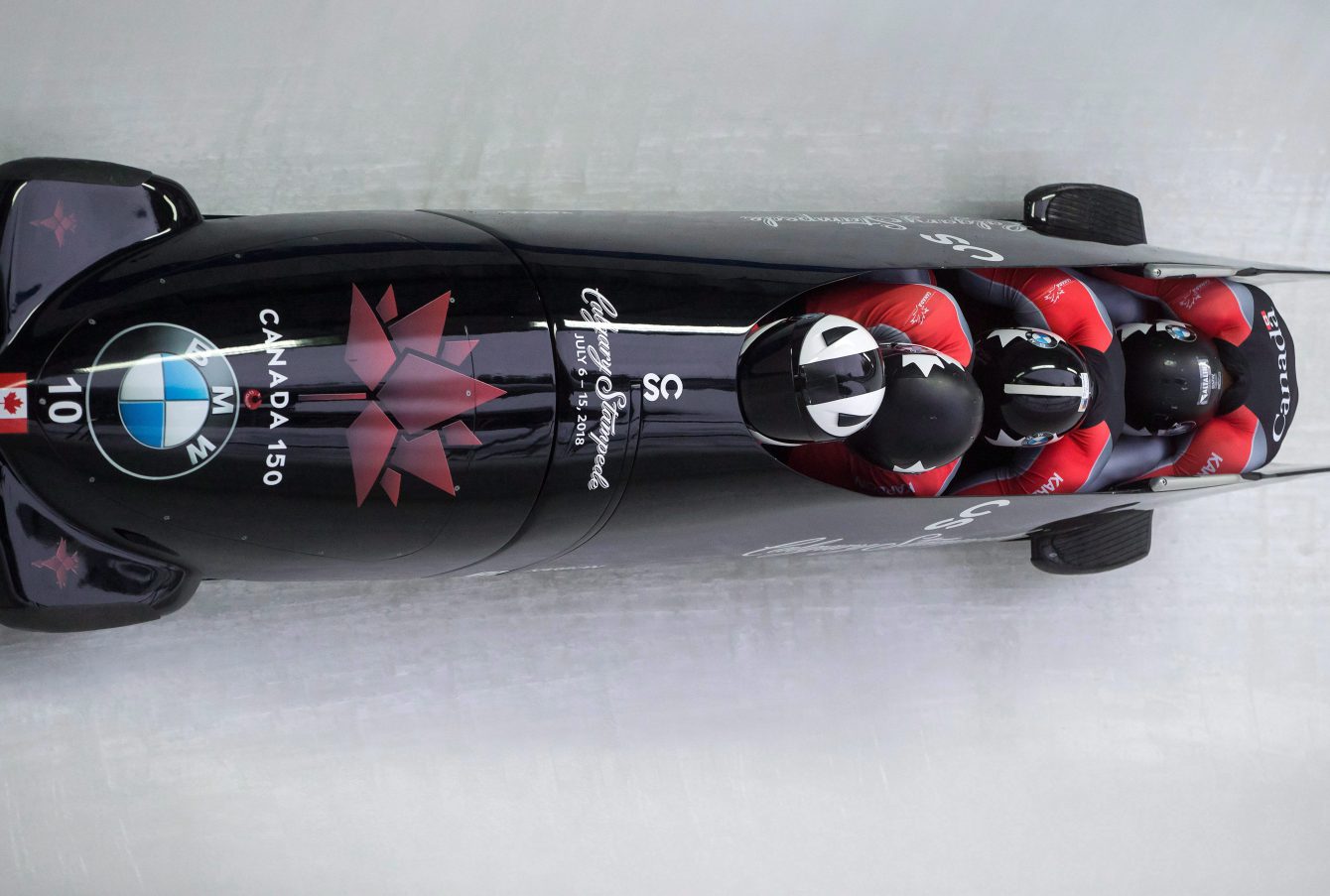 George, who competed in the 100m hurdles at London 2012 and Rio 2016, echoes Smith’s sentiment about bobsleigh being a whole lot more than just running fast on ice.

“The biggest thing was getting stronger, lifting a lot heavier,” says George. “I think I didn’t respect how much strength played a role and how much stronger I needed to get to be able to find the positions that I needed behind the sled.” 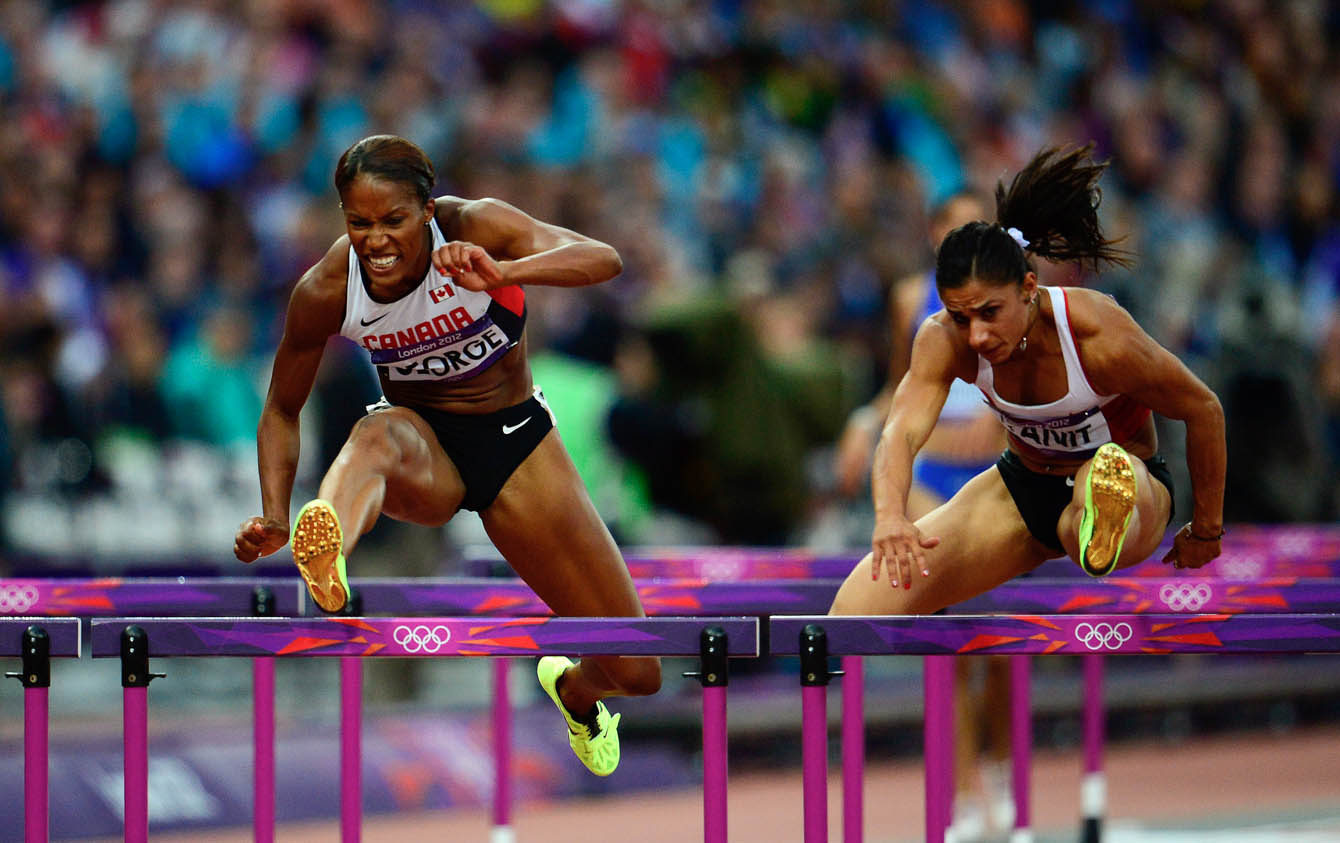 Canada’s Phylicia George (left) competes in the women’s 100-metre hurdle semifinals at the Olympic Stadium during the Summer Olympics in London on Tuesday, August 7, 2012. THE CANADIAN PRESS/Sean Kilpatrick

Beyond the need for physical strength, Smith and George also needed to dip into their reserves of psychological strength to overcome the inevitable obstacles of adapting to a whole new athletic discipline.

For Smith, though, there was never serious thought given to abandoning the quest.

“Everybody warned me when I first started out, saying, ‘You better watch out, Seyi, this isn’t track, there isn’t the glamour, you’re going to be working in the cold and lifting sleds,’’” says Smith.

“It’s been quite the opposite. Every month I’ve liked it more and more. I told one of the guys that the only time I actually said that I was having fun out loud is right before we crashed in training. So I don’t say it out loud anymore. But inside, I am still enjoying myself quite a bit.” 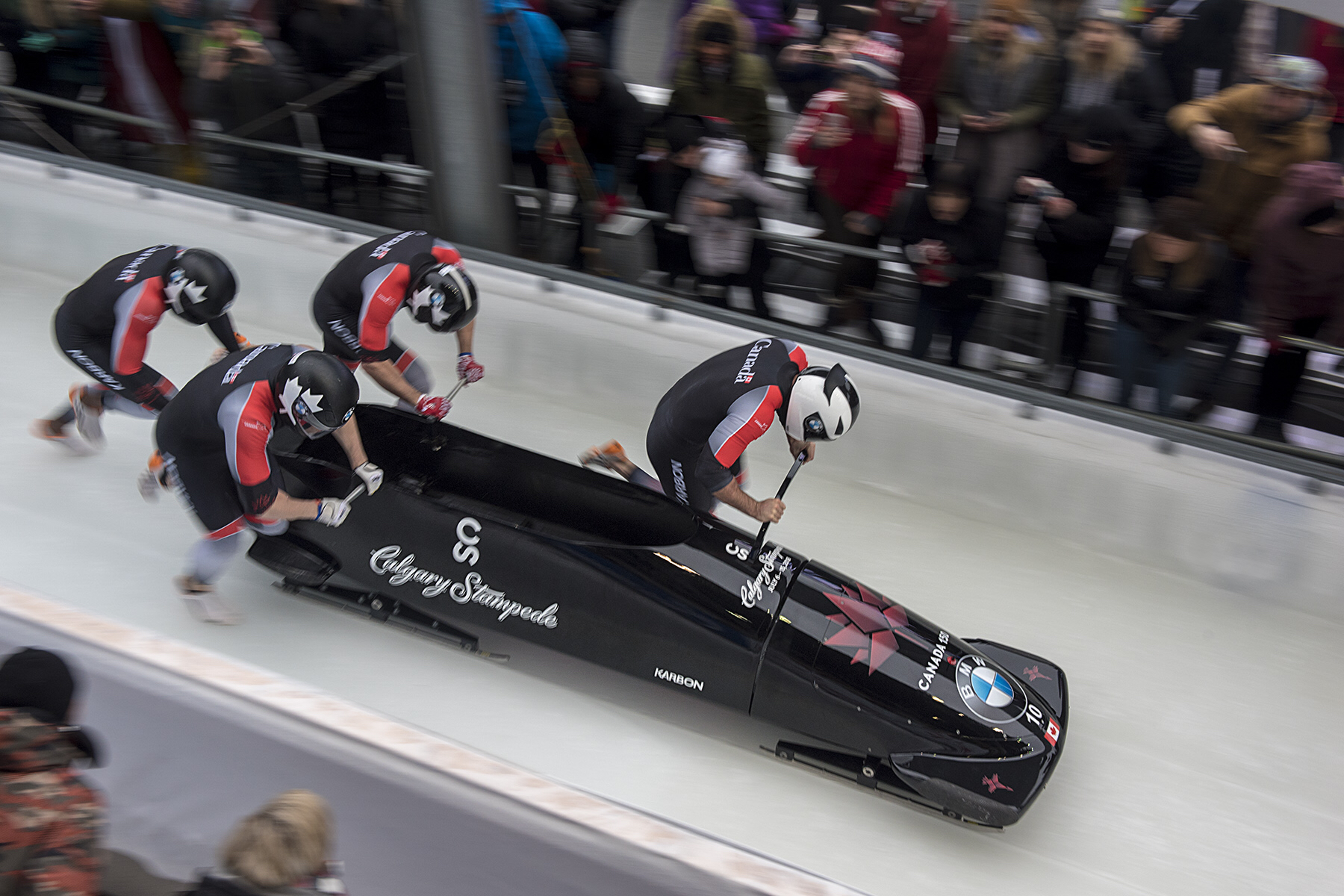 The Canadian sled of Justin Kripps, Alexander Kopacz, Jessee Lumsden, and Oluseyi Smith push their sled off the start at the 2017 IBSF World Cup event in Whistler (Photo: Guy Fattal)

George fared a bit differently, having competed at the Summer Games less than two years ago, and still being active in track and field. She says getting started in bobsleigh was “very rough” and she definitely second-guessed her decision.

But having been recruited to bobsleigh by Kaillie Humphries, the two-time reigning Olympic champion in the two-women event, it was perhaps inevitable that George’s competitive spirit would eventually win the day.

“There definitely were days when I was like, ‘man, what am I doing out here?’” says George. “But seeing myself get better and being a part of a team was a really cool and interesting aspect for me, where I’m used to being an individual. … I’m really happy I stuck with it and saw my potential through.”

Not all multi-sport athletes make the move over from the Summer Games; some are already well acclimated to the chilly conditions of winter sports.

Brittany Phelan competed in alpine skiing at Sochi 2014, but for years, she’d dreamed about the possibility of reaching the Olympics in ski cross. In PyeongChang, that’s exactly what she’ll be doing.

She’d been on Canada’s alpine ski team alongside Georgia Simmerling between 2008 and 2010, just before Simmerling moved into ski cross as it was exploding in popularity. Though drawn by ski cross, Phelan stuck with alpine and went on to reach Sochi 2014 in that event.

But in early 2015, she suffered a major calf injury and by then, her mind had already drifted away from alpine—in retrospect, she calls the injury a “blessing in disguise”. That spring, she made the switch to ski cross and hasn’t looked back. 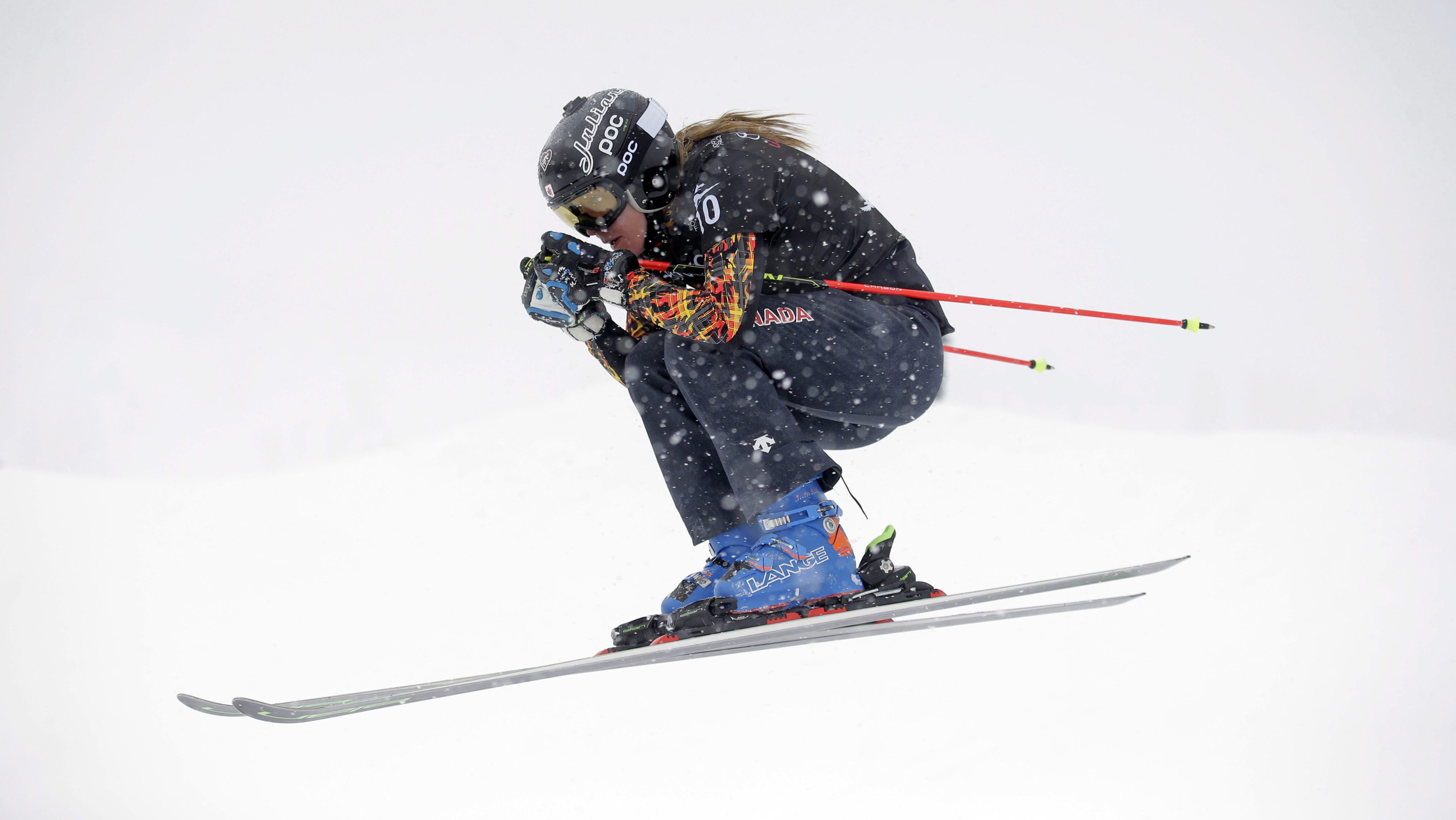 “Every day I’m so happy to be where I am and I think it is the sport that I was meant to be in,” says Phelan. “I don’t regret any years that I spent in alpine; I loved it for the majority of my career and I think it gave me a lot of skills that help me in ski cross, and I definitely don’t regret the path that my career’s taking me in now.”

Part of Phelan’s excitement also came from being reunited with Simmerling, who was also on pace to reach PyeongChang until a devastating injury last month ruled her out.

Even so, perhaps Simmerling’s own successful history as a multi-sport athlete—she went to Vancouver 2010 in alpine skiing, Sochi 2014 in ski cross and won bronze in team pursuit cycling at Rio 2016—will serve as a reminder to Phelan (as well as George and Smith) that change can sometimes be a good thing.