Labbé: A story of depression, a bronze medal and the power of resilience

Labbé: A story of depression, a bronze medal and the power of resilience 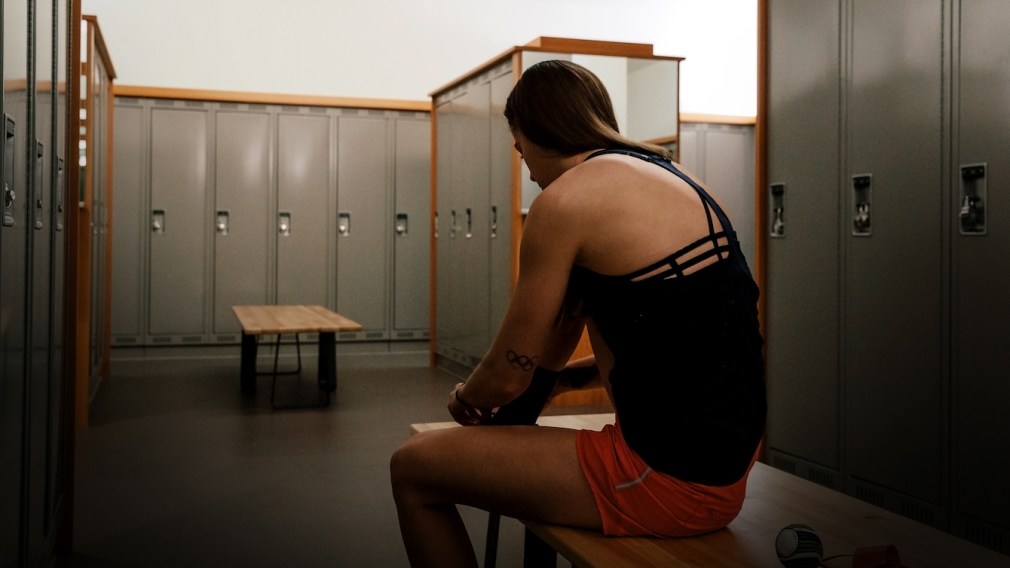 On the second floor of Stephanie Labbé‘s southwest Calgary home, at the back of a walk-in-closet almost spacious enough for a penalty kick, a sleek wood case in the top drawer of a black filing cabinet holds a bronze medal from the Rio 2016 Olympic Games.

Labbé had adored that medal.

“That medal symbolized ups and downs, my journey, from 10-year-old soccer player to Olympic medal winner,” Labbé says. “The medal symbolized lessons and growth. This was everything I had worked for.”

Then life got in the way, indelibly changing her. 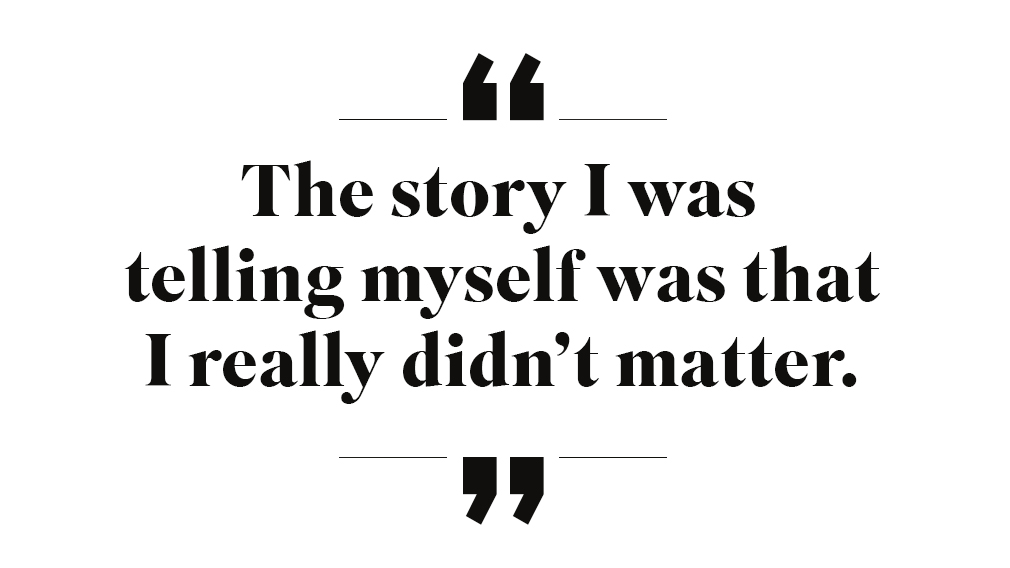 This wasn’t the common post-Olympic funk athletes feel after the Games. Her sadness was more curious, more profound. She sensed some well-wishers were more interested in an inanimate object, those 500 grams of bronze, than the flesh-and-blood woman who had sweated for it.

Labbé wasn’t wearing the medal. The medal was wearing her.

And when you misplace the narrative of your own life, bronze, in the wrong light, can look like dirt.

Labbé is a goalkeeper. She builds walls on the pitch, positioning teammates to defend free kicks. As she was losing the threads of her life – a romantic rupture, a demotion at her pro club– she was constructing another wall. Destructive thought by destructive thought, Labbé was walling herself off. She is ‘keeper tall’ – 5-foot-9 1/2 – but even on tiptoe she could not see over the parapets of depression.

This is the story of how Labbé’s wall came tumbling down.

There is no one-size-fits-all approach to dealing with depression. Labbé, who by this time had developed an acute sense of where her personal tripwires lay, relied on talking, yoga, nature, a puppy named Rio, a new romance and an elaborate network of support.

“(Stephanie’s return) isn’t about the power of choice … but the power of resiliency,” says Catherine de Beaudrap, Labbé’s close friend since high school in Spruce Grove, Alberta. “She always had an idea of who she is and who she wants to be. I don’t think she ever lost it. When you stripped away the soccer player, when you took away all the labels of what people supposed you to be, she still valued her close relationships. That allowed her to persevere through some dark times.”

Labbé had felt the icy clutches of anxiety and depression earlier, also in an Olympic year.

As a 20-year old she had made the 2008 team as an alternate and was hopeful by London 2012 she could claim the net. But as Olympic preparations began early in 2012, Labbé remained stuck behind veterans Karina LeBlanc and Erin McLeod.

Storm clouds rolled over her eyes. She complained. She made excuses. She hid in her room. She fretted so much about things she couldn’t control she lost focus on the things she could. After the Cyprus Women’s Cup in February, Labbé decided to quit the national team and play only for her club in Örebro, Sweden.

“I was neither happy nor healthy,” Labbé says. “Crying every day, secluding myself – Cyprus is when everything hit. I had to take things into my own hands, to step away before it got worse. I never told myself I suffered from depression or anxiety. Those weren’t words I would’ve used back then. But I learned one of the cues for me is when I remove myself from people. That’s what I was doing.”

Eventually she would contact de Beaudrap, who, as it turned out, was dealing with her own depression. De Beaudrap, who had played hockey at St. Thomas University in Fredericton, was suffering from what would be diagnosed as post-concussion syndrome. They formed a two-person support group.

“You could see her withdraw,” de Beaudrap says. “You could feel the angst. You could see the forced smile being in public when we’d go for coffee.”

“You always think you’re alone,” Labbé says. “You sense nobody can possibly understand what you’re going through. But I’ve seen the reaction to opening up because other people are suffering in their own ways. Sometimes just one word in your story sparks a connection. I’m thinking if we had known about each other’s situation right away, we could have helped each other even more. What I got by opening up was support, love and empathy.”

Labbé’s healing was rooted in making conscious choices, leaving her house and stepping out of her head. In August she flew to London to watch Canada play a 2-2 Olympic match against a Swedish team that included several club teammates.

“I was watching all my best friends,” Labbé says. “It was a pretty humbling experience. You’re not the one out there. You’re not the hotshot.” She did not stay for Canada’s stunning bronze-medal win against France. That victory belonged to others. “This wouldn’t have been a stop along an enjoyable journey.”

A few months later, she felt ready. She called John Herdman, then the national women’s team coach, and asked if she could return. A year after walking out, Labbé flew to the Cyprus tournament focusing on nothing more than being a great goalkeeper and a good teammate.

She again was at the back of the line. Labbé would not get the net until after LeBlanc retired from international play in 2015 and McLeod tore her right ACL for a third time in the spring of 2016. McLeod had been in goal when Canada won its first Olympic soccer medal in London. Rio was Labbé’s time. She played the best games of her life, won a medal, and she came back lighthearted to the Washington Spirit, hoping to use the Olympic Games as a springboard to a National Women’s Soccer League (NWSL) championship.

To her dismay, Labbé soon realized the Olympic buzz in the United States had dissipated the exact moment Team USA lost to Sweden in a quarterfinal shootout.

“There was a small sign at the entrance of the locker room that read ‘Congratulations Canadians,’ but that was about it,” says Shelina Zadorsky, a central defender, who, with Labbé and veteran Team Canada midfielder Diana Matheson, played for the Spirit. “Not exactly a big welcome home.”

There was a more ominous sign for Labbé. In her Olympic absence, Kelsey Wys had usurped the No. 1 goalkeeper job on what turned out to be a permanent basis.

“In those five, six weeks until the season ended, I crashed,” says Labbé, who again was going through a romantic break-up. The depression of 2012 returned, now with a snarl and a sneer. Again, she built her personal wall. Again she lost her motivation to train.

“She wasn’t given a chance to win back her job, and Steph turned quiet,” Zadorsky says. “She was riding an emotional rollercoaster, from the high of Rio to the situation in D.C. There definitely were some tears shed.”

The only faint light was a budding romance with Georgia Simmerling, a Canadian cyclist with whom she had reconnected at the Rio Closing Ceremony. During the winter of 2016-17, Labbé visited Simmerling in Vancouver, brightening her mood. She returned to yoga, long part of her routine, and walked her new puppy. Labbé tamped down the depression at the national team camp in January, but dreaded the thought of the three-day drive from Edmonton to D.C. in March. The Spirit was a morass of dysfunction and unresolved issues remained with then Spirit coach Jim Gabarra, who had declined to trade Labbé because Wys had torn her ACL in November playing in Australia.

Labbé now says she never quite recovered from that soul-sucking, cross-continent trip. She and her coach had tactical disagreements – one of Labbé’s strengths as a keeper is putting the ball on the ground and starting build-ups; her coach preferred low-risk, direct plays – and her questions in meetings were viewed not as gathering information but insubordination. Labbé was depressed, battered by what she says was “constant mental abuse” from the coach. In August 2017 she discussed her mental health in an article in USA Today. A month later Gabarra pulled her aside after a training session.

“He said the staff thought the team wasn’t playing for me, that they didn’t want to win for me,” Labbé says. The contention was laughable, according to Zadorsky, who lauded Labbé’s play and her value as a teammate. But the wounds were deep. Says Labbé “I took (Gabarra’s claim) negatively, as you can imagine. My self-worth had been taken from me. I broke down in the parking lot. I fully lost control of myself. I was so removed from who I was, it was like I wasn’t even in my own body.”

“That was a big shot at her character,” Simmerling says. “A big punch at her self-esteem.”

A few days later the Spirit put her on medical leave.

Unfortunately – or perhaps fortunately – Labbé had trod that path before. She knew how to follow the breadcrumbs back to her best self. “I know what I need,” she says. “The hardest part is doing it.”

She started with a camping trip with her family to Jasper, back to nature. Yoga. Meditation. She began an inner dialogue, personal pep talks. She leaned on Simmerling, her parents – Bev and Gerry, her brother Kevin, and other friends. She reengaged with the wider world, including the soccer world, returning to Sweden to play for Linköping. And she talked openly about depression.

“For me it’s the conversation,” says Labbé, who in 2019 will play in the NWSL and wear the Team Canada jersey as the national squad gears up for the FIFA Women’s World Cup this summer. “Before I started, I really didn’t know what to say. Now I realize this is going to be a constant battle. I recognize the triggers. But I also know my story can touch people. At first I thought maybe a few soccer players might understand, but it’s been much more.”

“The legacy I want to leave, one of the things I keep coming back to, is being authentic. By talking, by being real, I’m showing that everybody takes different journeys, unique pathways to being who they are.” She pauses. “I feel that’s my purpose in life.” 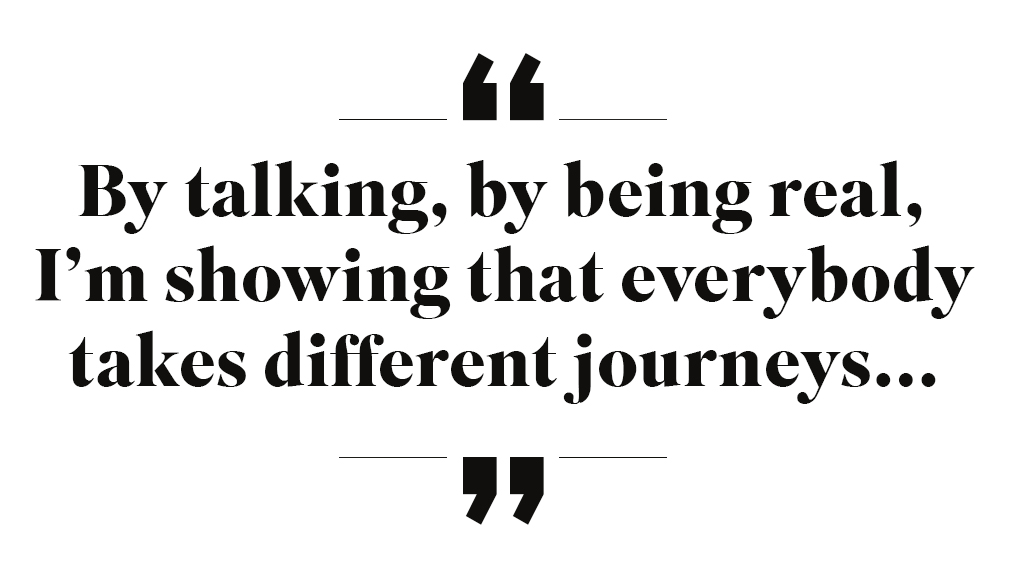 In November, Labbé, 32, fished the medal out of that filing cabinet. She was headed to Spruce Grove to give a seminar titled “Mindset of a Pro.”

Sixty people were waiting for her. Soccer players, yes, but there was a swimmer, a ski racer, a cheerleader and scores of coaches in the hotel conference room. For two hours Labbé spoke about the value of mindfulness, visualization and setting goals. She also showed off the 500 grams, that beautiful bronze.

“Something’s changed,” she says. “Now I can see just so many positives of that medal. You see smiles on the kids’ faces. ‘Can I hold it?’ You really can feel the impact of an Olympic medal.”

In the proper light, bronze also can look like gold.

WATCH: One Heavy Medal – A TSN Original feature on Steph Labbé as part of the Bell Let’s Talk Initiative

January 30 is the 9th annual Bell Let’s Talk Day. As a partner of Bell, we are proud to support them and hope you will join us in this important initiative to help Canadians living with mental illness. On January 30, Bell will donate 5¢ to Canadian mental health programs for certain interactions, including every tweet and retweet using # BellLetsTalk. Feel free to share this story using the hashtag on Twitter and click here to find out how you can participate. To learn more, please visit Bell.ca/LetsTalk.