Shapovalov and Auger-Aliassime: by the numbers

Shapovalov and Auger-Aliassime: by the numbers 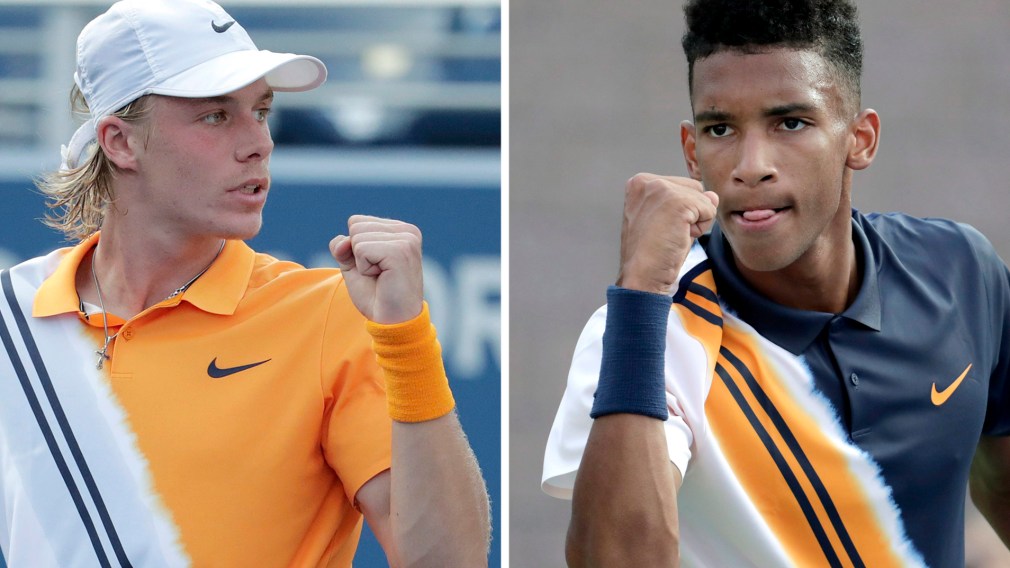 Young Canadian tennis stars Félix Auger-Aliassime and Denis Shapovalov have been making international headlines for the last few years, both in Canada and across the world. The year 2020 has been no exception, these two tennis phenoms continue to rack up the accolades.

The hard work is paying off, as Shapovalov and Auger-Aliassime are heading into the Sofia Open ranked number one and two respectively. But first, let’s take a look at some of their top achievements.

Félix and Denis: a bromance we love

If you didn’t know yet, Felix Auger-Aliassime and Denis Shapovalov are childhood friends, learning how to play tennis at the same time. Shapo even lived with Auger-Aliassime during the 2017 Rogers Cup, the most recent year the men competed in Montreal. Today, they find themselves together in the greatest spheres of world tennis, and continue to remain good friends, even when they clash.

27: On August 27, 2018, Felix and Denis went head-to-head at the US Open. Felix had to withdraw for health reasons, and we had one of the most moving moments between the two friends.

2: In Miami, it was the second time that two Canadians had competed at the semifinals of an ATP Masters 1000 tournament since the beginning of this series. The first time it happened was in 2013, between Milos Raonic and Vasek Pospisil at the Rogers Cup.

2/1: The two friends clashed three times; Denis won two games, and Félix, one. Shapo won their two clashes at the US Open 2018 and 2019 (both in the first round), while Felix took the win against Shapo in the first round of the 2019 Madrid tournament.

Denis Shapovalov: not just a stroke of luck

Shapovalov entered the big leagues in 2017 at the Rogers Cup in Montreal. We remember how it was yesterday: Shapo beat Rafael Nadal in the round of 16 in three sets of 3-6, 6-4 and 7-6, in front of a local crowd.

If some people could think that it was a stroke of luck, that Nadal had not had a good day, that Shapovalov would be put back in his place rather quickly…Well, some were wrong.

Finally had some time last night to think about the last 6 days of my life. I'd like to thank the people from Montreal and across Canada for the love and support. I have never come across a more electric atmosphere. I want to thank all my sponsors for their belief in me throughout the ups and downs. And lastly I would like to thank my team… I am so thankful to be working with such a fantastic and humble group of people. Without you guys I am nothing so I am so thankful for all the time you guys sacrifice towards helping me become better. And even though not all of you could make it to watch my match live, I still felt your presence in my heart. Thank you Canada et Merci Montreal. #DontStopFighting

1: Shapovalov won his first ATP Final at the Stockholm Open on October 20, 2019. This was the first time he had faced off against his opponent, Filip Krajinovic, who he beat in straight sets.

2: Shapovalov was the second youngest player to reach the semi-finals of the Miami Open. Who is the youngest? His friend Felix, of course.

37 and 19: The ages of Roger Federer and Shapovalov when they faced off in the semifinals in Miami. Federer said in an interview that Shapovalov was not even born when he started his tennis career.

Their age difference (18) is the biggest in the history between two opponents in the quarter-finals, semi-finals or finals of a Masters 1000 ATP tournament.

What a run in Miami. Thank you to everyone who supported me these past couple of weeks, it’s been a hell of a ride. To top it off I finally got to go up against my idol @rogerfederer. I’ll be back stronger next time 💪🏼 #DontStopFighting #hatersgonnahate

10: Denis Shapovalov cracked the top 10 in the ATP ranking after a stellar streak of tennis in September 2020. In that span, he became the first Canadian man to reach a quarterfinals match at the US Open.

Well, what can I say. I put my heart into every point these last two weeks and came out a little short. Sometimes it do be like that 🤷🏼‍♂️😂. I just want to take a minute to thank my team and everyone close to me for their help and support. We have all been working extremely hard over the past 6 months and it showed ❤️. I would also like to thank all of my amazing fans for being there with me, on every single point throughout the tournament. I appreciated all of the love over the past two weeks and when my body told me no, you all pushed me to keep going and overcome pain and fatigue. Lastly, I would like to thank @usopen for making this tournament possible. It’s been amazing to be back on court and having the chance to compete again. Like always, the Shapo team will never stop fighting 💪🏼. Thank you guys for being a part of my night train 😎👊🏼🙏🏼 📸: Pete Staples

4: Given all the obstacles these stars had to overcome this year, with the halt in play due to COVID-19, Shapovalov had his best pro season yet. He reached the quarterfinals at four different tournaments this year (ATP Cup, ASB Classic, Open 13, US Open).

Semis: Right after an amazing performance at the US Open, Shapo followed up his quarterfinals appearance there with a semifinals match at the Italien Open.

About a month later at the St. Petersburg Open, the 21-year-old defeated veteran player Stan Wawrinka from Switzerland, to reach yet another semifinal in the calendar year.

Félix Auger-Aliassime: the one who breaks all age records

A year ago, we talked about Felix Auger-Aliassime as a next-generation player, someone who could take over in a few years. Few experts, even within Tennis Canada, had predicted that his climb would be so dizzying.

Then in March 2019, he became the youngest player in tournament history to reach the semifinals.

33: Auger-Aliassime was the youngest player to reach this rank since Lleyton Hewitt on October 18, 1999, who was exactly the same age (18 years, 7 months and 24 days).

2000: Auger-Aliassime was the first child of the 2000s to be on the main draw of a grand slam tournament at Flushing Meadows last August.

Auger-Aliassime’s year was impressive and his talent still feels untapped. In February 2020, before the stop in play, he reached the finals at the ATP Rotterdam and the Open 13.

At the US Open, FAA reached the fourth round losing to the eventual tournament champion Dominic Thiem. But along the way, he had exceptional performances including, a dominating match against tennis legend Andy Murray, where the Canadian showed displayed his strength beating the veteran in straight sets, 6-2, 6-3, 6-4.

In October, 20-year-old continued to amaze, reaching the finals after a win against Spaniard Roberto Bautista Agut in the semifinals at the BETT1HULKS Indoors tournament.

1: Auger-Aliassime and his doubles partner Hubert Hurkacz were champions in Paris. In perhaps one of his greatest achievements to date, FAA claimed his first title in doubles at the 2020 Paris Masters.

17: FAA’s current ATP ranking. He’s currently the youngest player ranked in the top 25 and has six runner-up finishes on tour.

It’s clear that Shapovalov and Auger-Aliassime are at the top of their game, with still so much room to grow as players.  How great can these two tennis phenoms become? It’s uncertain, but the future is bright, very bright.