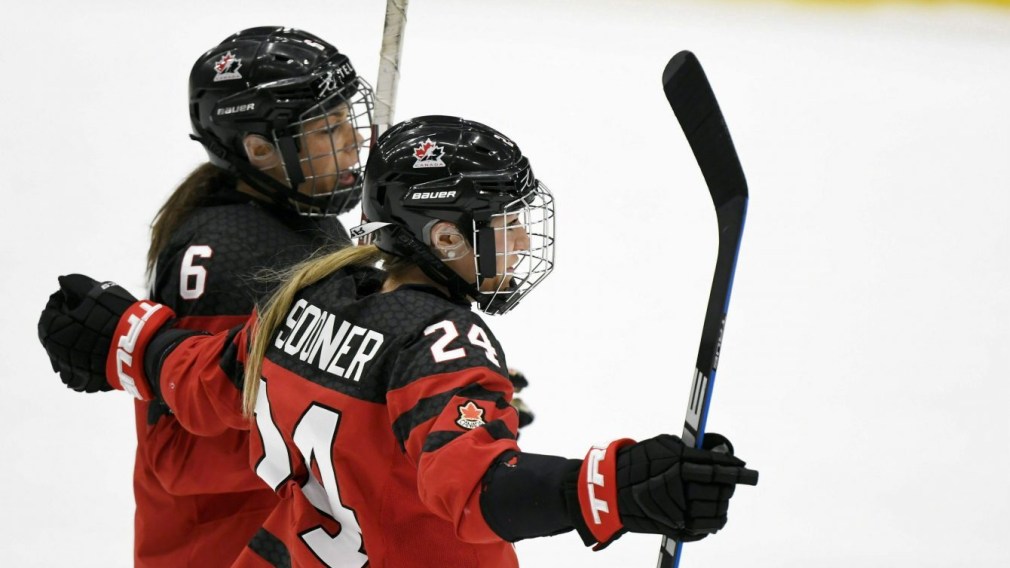 The 2019 Women’s World Hockey Championship is underway in Espoo, Finland. Here’s how Canada is doing:

Team Canada will skate away from the IIHF Women’s World Hockey Championship with bronze medals draped around their necks after beating Team Russia 7-0 in the bronze medal game.

After being upset by Finland 4-2 in the semifinals just one day before, Canada was not competing in the gold-medal game for the first time in the tournament’s history. However, that didn’t stop them from finishing worlds on a high note.

Nathalie Spooner was first to strike for Canada with a wraparound the net early in the first period. She then assisted Jaime Bourbonnais to the net with help from Sarah Nurse to up Canada’s lead to 2-0 just before first intermission.

During the second, Canada was able to add another point to the scoreboard with a goal from Rebecca Johnston. Johnston got the shot from Spooner and Nurse and went five hole to put the puck past Russian goaltender Nadezhda Morozova.

The third period saw four more goals for Team Canada. 21-year-old Loren Gabel scored her fifth of the tournament after Morozova left her crease to extend Canada’s lead to 4-0. Jamie Lee Rattray capitalized on a Russian penalty, scoring a power play goal for the red and white. Initially, her goal was put under review but was ultimately upheld by the officials. Erin Ambrose also scored a power play goal in the third with assists from Rattray and Brigette Lacquette. Finally, Gabel scored her second goal of the game on a breakaway to extend Canada’s lead to 7-0.

The Women’s World Hockey Championships will conclude on Sunday afternoon with a showdown between Team USA and Team Finland.

Canada will host the 2020 tournament in Halifax and Truro, Nova Scotia.

Team Canada will play for bronze after falling to Finland in the semifinals on Saturday. The tournament hosts upset Canada 4-2 in a heartbreaking back-and-forth battle. For the first time in the tournaments history, Canada will not be playing in the gold medal game.

Jamie Lee Rattray opened the scoring just two minutes into the game to give the Canada an early advantage. With help from a saucer pass from teammate Laura Stacey, Rattray was able to get it past Finnish goaltender Noora Raty with a tip-in at the net.

👀 @ratt26 open the scoring in the #WomensWorlds semi-final ⬇️ pic.twitter.com/qXA6RHf0qp

Finland responded with a goal of their own just before the end of the first to even out the game at 1-1. The Fins were able to carry that momentum into the second, scoring a power play goal to take the lead just a few minutes in.

The Canadian squad was quick to answer Finland’s goal, this time with one from Loren Gabel. The 21-year-old netted a no-look redirect to put Canada back on the scoreboard. However, Finland regained their lead with a goal from Nelli Laitinen to make the game 3-2 after 40 minutes of play.

Team Canada came out strong in the third in hopes of turning the game around in their favour. The Canadians celebrated goals twice in the final period, but were left disappointed on both occasions when they were deemed no-goal.

Finland was able to capitalize on a scramble outside of the net to up their lead to 4-2 and reach the gold medal game for the very first time.

Canada will take on Russia in the IIHF’s bronze medal game on Sunday. Team Russia fell in the finals to Team USA 8-0 in the semifinals.

After finishing the round robin 3-1 Canada was looking to start their road to their 19th straight gold medal game.

Canada began the elimination round against Germany, who was moved up from Group B after finishing second in the division.

Just over seven minutes into the game, Blayre Turnbull missed the original breakout pass from Jocelyne Larocque, but still managed to beat the Germans to the puck. She drove the net making a beautiful cutback move out front as she slid the puck far side. Erin Ambrose also received an assist.

Canada scored another goal in the first period off a rebound, but it was immediately called off due to a crease violation.

During a second period power play, Sarah Nurse threw a puck on net that Brianne Jenner tipped five-hole to extend Canada’s lead to two. Only two minutes later, Laura Stacey was able to put a rebound in the back of the net, with assists from Jamie Lee Rattray and Micah Zandee-Hart.

Canada opened the third period with another goal called back because of, yet again, a crease violation. It was no problem for the Canadian women who scored under a minute later on a Natalie Spooner tip out front. Later, Turnbull got her second goal of the game to make the final score 5-0.

Turnbull received player of the game for Canada and Emerance Maschmeyer earned the shutout with nine saves.

Canada advances to the semifinals and will play Finland on Saturday April 13.

After a rout of Russia on Monday, Canada looked to keep their winning ways rolling against the host Finns. At the 2017 Worlds, Finland defeated Canada during round robin play, so Canada was well aware of the Finns’ potential.

Right after a Finnish penalty expired, Renata Fast entered the zone and cycled the puck back up the boards to Ann-Sophie Bettez. Bettez let a shot go which was tipped up high by Loren Gabel for her second goal of the tournament. With six minutes left in the first, Rebecca Johnston pounced on a loose puck and made no mistake putting the puck in the empty net.

That first goal wasn’t enough for Gabel. With just over four minutes left in the second, she received the puck left of the slot and absolutely ripped it top right corner, giving the Finnish goaltender no chance.

Gabel followed that up with a beautiful saucer pass to Brianne Jenner, who made a nice move to her backhand and lifted the puck into the net.

Finland got on the board in the third period off a quick, high point shot that fooled Szabados. But Canada would respond with goals from Sarah Nurse and Erin Ambrose to close out the game.

Canada closed out their round robin play with the 6-1 victory, giving them a 3-1 record. Canada will now play Germany in the quarterfinals on April 11.

After dropping a close game to the United States on Saturday, Team Canada looked to bounce back versus Russia in their third game of the tournament and did they ever.

On their third power play of the first period, Natalie Spooner redirected Brigette Lacquette’s point shot into the back of the net. Brianne Jenner also received an assist on the play.

Canada’s offence exploded in the second period with four more goals, two of which came from Spooner. Both of Spooner’s second period tallies were perfectly executed wrap arounds to complete her hat trick. Rebecca Johnston and Blayre Turnbull also added goals during the second. Russia was unable to record a shot on goal during the period.

#APRIL8 #CANvsRUS End of 2
WHAT A GAME SO FAR!!!! 🎩🎩🎩#ICYMI – Here's another look at Natalie Spooner's (@natspooner5) hat trick.
She'll be looking for more in the 3rd!#WomensWorlds #Espoo2019 pic.twitter.com/H6RUwdpIxN

Canada took an early penalty in the third period and Russia capitalized quickly, only needing 14 seconds on the man-advantage to score their first of the game.

Spooner deservedly won player of the game for Canada with three goals and one assist. The final shots were an astounding 45-8 for Canada.

We knew the action would be at its finest when the puck dropped for the 147th time between the North American rivals. Three out of five goals were scored on the man advantage in the combined 13 power plays in this game.

The United States won the first period by scoring the first goal. Canada earned their first power play goal shortly after when Sarah Nurse, assisted by Brianne Jenner and Brigette Lacquette, poked in a loose puck in the crease to even the scoreboard. Taking advantage of a Canadian turnover, the United States responded with speed in the last few minutes of the first period to put the Americans up by a goal. A back-and-forth first period ended with Team Canada trailing to Team United States, 2-1.

Game over. 🇨🇦 drops a nail-biter to 🇺🇸.

Canada opened the second period with energy. It took less than two minutes for Canada to tie the game. In her 100th game with Team Canada Women, Jenner redirected Lacquette’s point shot past the American goalie to get even with a second power play goal. Nurse was also credited with an assist. The Americans regained their lead ten minutes later, as Annie Pankowski scored the winning goal for the United States with a slapshot over Emerance Maschmeyer’s right shoulder for another power-play goal.

The third period was less eventful with neither team scoring. With each team’s offence registering an even nine shots on goal, Team Canada trailed 3-2. Team Canada fell one short in a nail-biter against the United States in this second match of the preliminaries of the Women’s World Championship. Overall, Canada had a 33-30 edge over the United States in shots on goal.

Canada took the lead in their first game when world championship rookie Loren Gabel received a pass in the high slot and notched Team Canada’s first goal of the tournament. Gabel’s goal came about halfway into the first period and was assisted by Brianne Jenner and fellow rookie Jamie Bourbonnais. Only 16 seconds later Canada found the back of the net again. This time it was a trio of Olympians involved on the goal with Natalie Spooner finishing it, Sarah Nurse on the primary assist and Renata Fast providing the secondary assist.

An impressive 10 minutes into her #WomensWorlds debut, @lgabel9 scores her first goal! 🙌

The second period was uneventful as neither team could score. However, Canada spent majority of the period on offence registering 18 shots on goal compared to Switzerland’s two.

Canada opened the third period with a controversial goal as Emily Clark banged home the puck whilst being pushed on top of Switzerland’s goalie. After reviewing the play, it was determined to be a good goal. Spooner and Micah Zandee-Hart were credited with assists. Clark scored her second goal of the third period by tipping a point shot from Jocelyne Larocque who received the pass from Erin Ambrose. Canada’s fifth goal of the game came from another tip, this time by former Patty Kazmaier Memorial award winner Jamie Lee Rattray. Rattray’s goal was assisted by Laura Fortino and Laura Stacey. With just under two minutes remaining in the game, Blayre Turnbull redirected a great feed from Fortino to make the final score 6-0. Fast tallied her second assist of the game on the play as well.

Shannon Szabados earned the shutout and Clark received player of the game honours for Canada. This victory is her 50th win with the national team.

The final shots were 53-6 in favour of Canada.