What is the difference between NBA, WNBA, and FIBA basketball rules?

What is the difference between NBA, WNBA, and FIBA basketball rules? 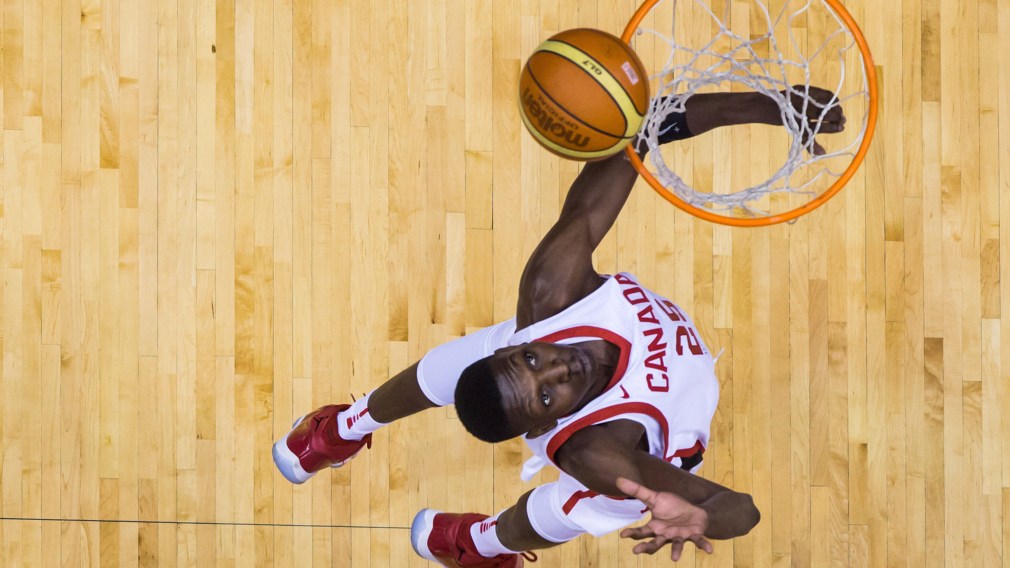 Canada’s lone NBA team, the Toronto Raptors, will be looking to defend their NBA title when 2019-2020 season starts on October 22nd.

Many NBA players will end up representing their country this upcoming summer at the Olympic Games. With Tokyo 2020 less than a year away, there is no better time to breakdown the differences between NBA, WNBA, and FIBA rules.

While you may think you know the many differences between them, you might want to go over some of the different rules below. If you don’t, you may find yourself screaming at your TV, as you watch an international basketball game, because you swear the referee should’ve called goaltending.

One of the biggest differences between the NBA and FIBA is the size of the court. Currently, the NBA and WNBA play on a court that is slightly larger, coming in at 28.65 X 15.24 meters, while a FIBA court measures 28 X 15m. 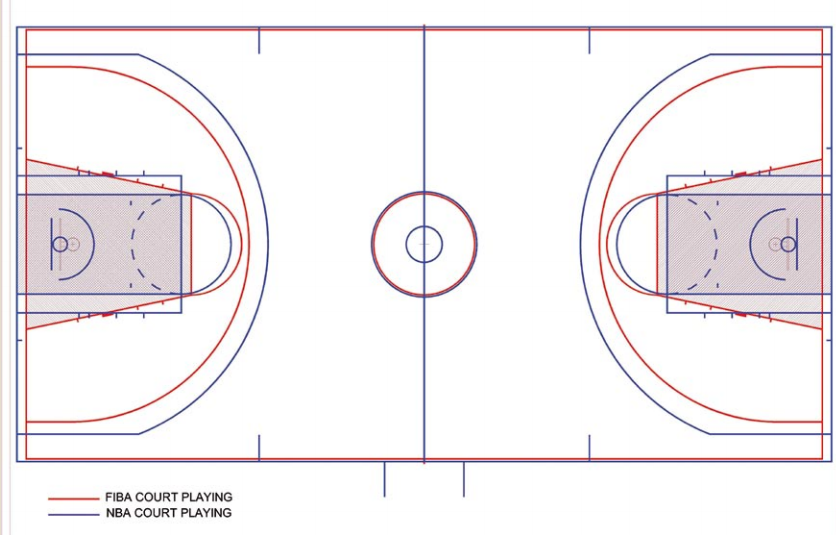 So is a bigger court better? Well, it is hard to say since the difference in overall court size is virtually minimal, although there is a major difference in regards to the three-point line.

While sharpshooter Steph Curry may be raining threes 7.24m away from the basket in the NBA, anytime he trades in his Golden State Warriors jersey for a Team USA one, he’ll be shooting behind a line only 6.75m from the hoop.

How big is a women’s basketball court?

On the women’s side, the WNBA adopts the men’s international three-point line at 6.75m, while the line moves in even further to 6.32m from the hoop on women’s FIBA courts.

What about the key?

Although the difference in court size does not seem that big, it actually has an impact on the flow and style of play as International basketball tends to be a little crowded in the key.

Since 2010, both the NBA and FIBA have used a rectangular key or restricted area, however, it was not always this way. Prior to 2010, FIBA used a trapezoidal restricted area. This change, among a number of others, were put in place to sharpen the international game and to make it more uniform from one hemisphere to another, according to the International Basketball Federation.

How big is the basketball?

One of the major differences between the men’s and women’s game is the size of the basketball.

During NBA and FIBA play men use a Size 7 basketball, with a circumference of 75 centimetres, while women use a Size 6 ball measuring 72.5cm around.

How long is a men’s international basketball game?

Both men and women play play 10-minute quarters in international games rather than the standard 12 minutes you’d see in the NBA. Not only does this mean that an NBA game, which runs 48 minutes, is 8 minutes longer, but it also hampers a team’s ability to make a fourth-quarter comeback.

This may be an issue for you if your country is losing, but look on the bright side: at least the misery of seeing them being blown out will be over sooner so you can get on with your day.

How long is a women’s international basketball game?

The WNBA employs two 20-minute halves rather than quarters, for a total game time of 40 minutes. 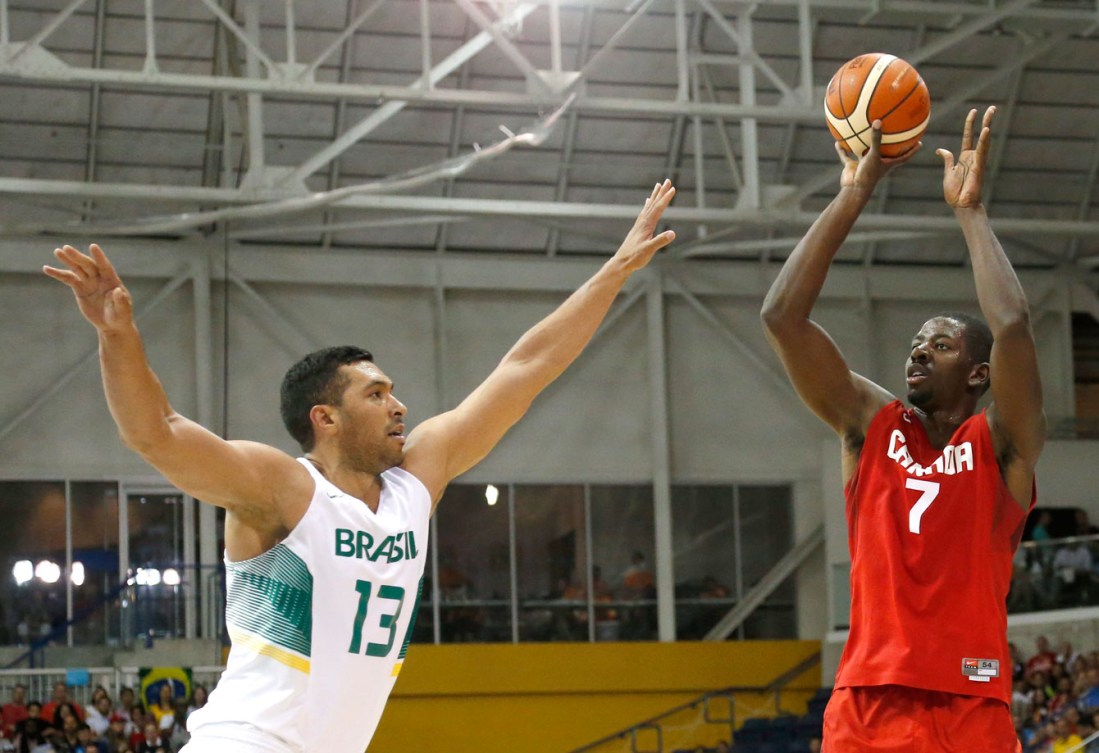 Andrew Nicholson was unable to power Canada’s men to TO2015 basketball gold.

In the NBA, a player is headed to the showers after committing their fifth personal foul or after receiving two technicals. FIBA rules, on the other hand, state that a player is removed from the game after only four personals. On the surface it may appear that FIBA rules are a little stricter, allowing one less foul, but when you consider that the international game is only forty minutes long, one less foul seems fair.

READ: What is the difference between racquetball and squash?

Another notable difference between the two rule books is in regards to timeouts. In a FIBA sanctioned game, you can only call a timeout during a stoppage in play and the coach must be the one to do so. In the NBA, however, a point guard can call a timeout in the middle of the game, allowing his team to draw up a perfect play. 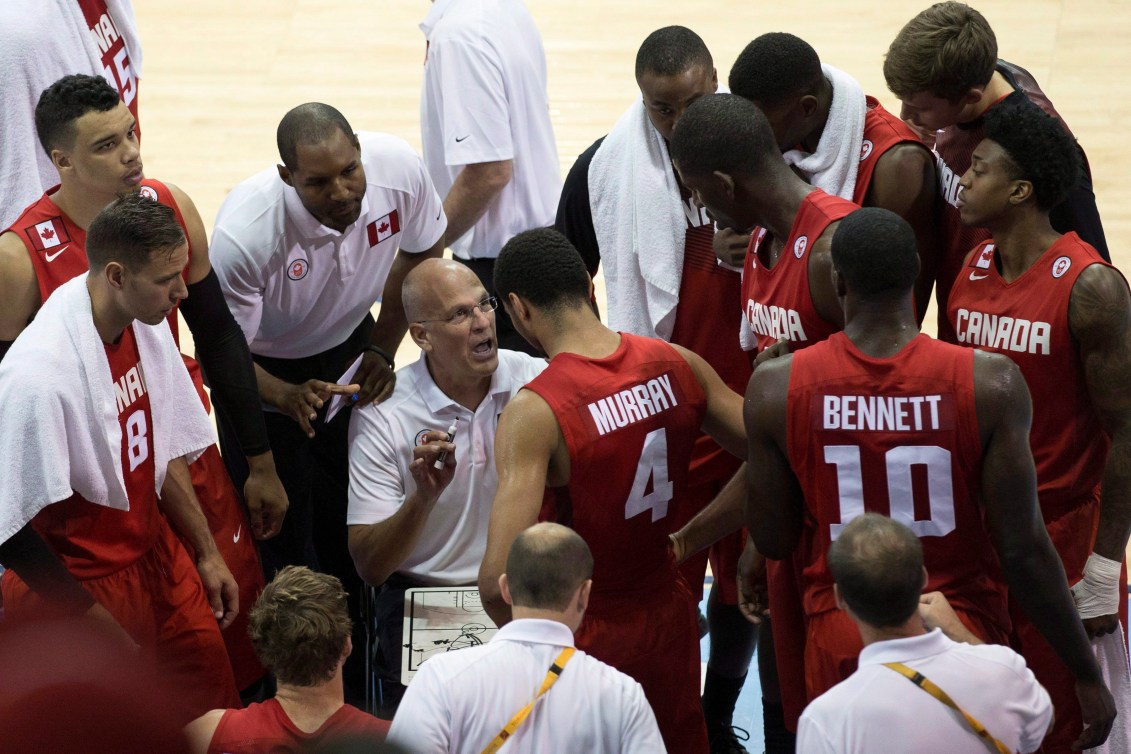 Canada coach Jay Triano leads a huddle with his players during the men’s semi-final basketball against United States at the Pan Am Toronto 2015 games in Toronto on Friday July 24, 2015. THE CANADIAN PRESS/Chris Young

Furthermore, FIBA competition allows five timeouts, two in the first half and three in the second half, whereas the NBA allows six timeouts. International competition also only allows for two timeouts in the final 2 minutes of the game.

While both the NBA and FIBA prohibit players from blocking a ball in a downward flight towards the rim, their rules are very different after that. In international competition, once the ball strikes the rim, any player can play the ball (i.e. swat it away or tap it in). On the flip side, an imaginary cylinder exists in the NBA that has the basket as its base. This means that if the ball is in this cylinder (and still has a chance to go in) a player can not touch it.