Top 10 moments at the World Juniors for Team Canada

Top 10 moments at the World Juniors for Team Canada 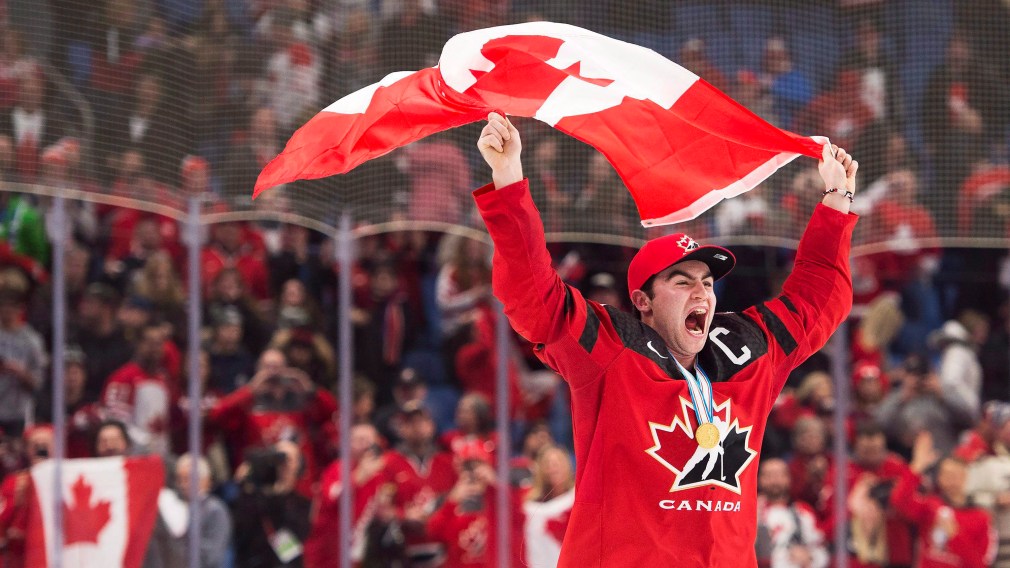 Ho-ho-ho, World Juniors hockey is back!

It’s the most wonderful time of the year…To huddle up around the TV, sip a hot chocolate, and watch Canada’s best young players suit up at the World Junior Hockey Championships!

So let’s get into the holiday spirit by reliving some of Canada’s greatest moments at one of our nation’s favourite hockey tournaments. 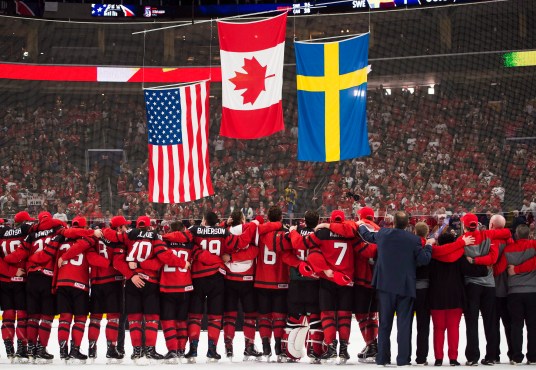 Overtime thriller in the Czech Republic (2008)

The 2020 IIHF World Junior Hockey Championships will be held in the Czech Republic, marking the fourth time that the Eastern European nation will have the honour. The last time they hosted the competition was in 2008 – a tournament that Canadians will remember fondly.

Facing off against Sweden in the final, Canada found themselves up 2-0 going into the third period. The Swedes charged back, scoring early in the final frame and then equalizing with 40 seconds remaining to send the game into overtime.

Rather than getting down on themselves, the Canadian team demonstrated their typical resilience. Less than four minutes into the extra frame, Matt Halischuk crashed the net to score, winning gold for Canada.

Canada holds on for gold against Russia (2015) 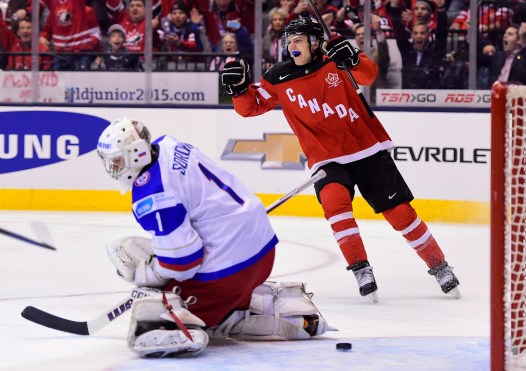 After scoring on the first shift and then chasing Russia’s starting goaltender just three minutes into the game, Canada felt comfortable about their chances. Maybe too comfortable.

The Canadian lead peaked at 5-1 with 7:30 remaining in the second period, but the game was far from over. Remarkably, the Russians surged back to make it 5-4 before the end of the period, setting things up for a nail-biting finish in Toronto.

Canada was able to bear down and hold on for a 5-4 win on home ice, earning their first gold in six years.

John Tavares leads the comeback against the US (2009) 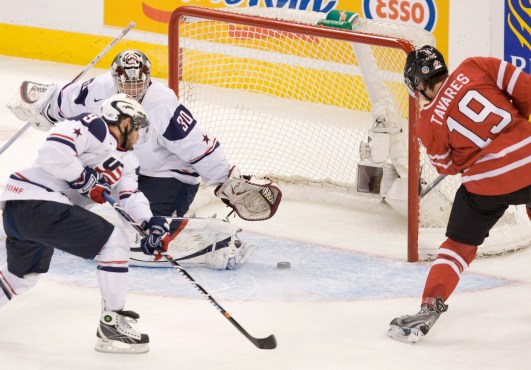 In a classic New Year’s Eve bout against the United States, Canada went down 3-0 less than eight minutes into the game. That’s when John Tavares decided to take over.

He scored two goals 48 seconds apart to make it 3-2, before Jordan Eberle tied the game minutes later. Canada carried that momentum to an eventual 7-4 win, as Tavares completed his hat trick in the third period.

Following that New Year’s Eve thriller against the United States, Canada earned a bye to the semi-final against Russia.

With Canada trailing 5-4 in the dying moments, we witnessed perhaps one of the greatest moments in Canadian hockey history. Tavares threw a weak shot towards the net that was blocked by a defender. Eberle pounced, depositing a backhand shot to tie the game with just five seconds left, and giving way to Gord Miller’s legendary goal call, “Can you believe it?”

Canada went on to win in a shootout and advanced to the gold medal game.

Canada completes the drive for five (2009)

The Canadian team carried the momentum of that wild semi-final win into the gold medal game, easily overpowering Sweden with a 5-1 win before a raucous Ottawa crowd. 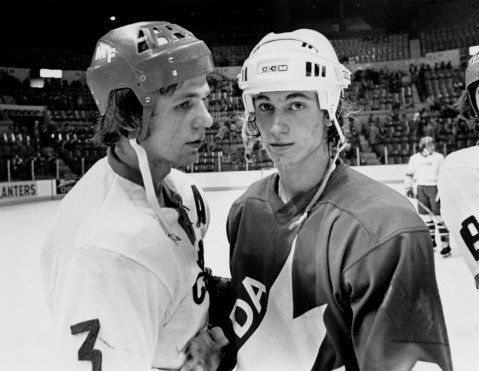 Wayne Gretzky is well known for smashing virtually every record in hockey – a habit he developed from a very young age.

In a tournament normally dominated by 18 to 20-year-olds, the 16-year-old phenom scored eight goals and 17 points in just six games for Canada en route to a bronze medal.

Gretzky led the tournament in scoring, while also earning top forward honours. His scoring record as a 16-year-old still stands as the best of all time, and likely will never be beaten.

Goaltender Manny Legace stole the show for Canada at the 1993 World Juniors. He handed host Sweden their only loss of the tournament before stopping 58 shots in a must-win game against Finland.

Canada went on to win gold while Legace was named goaltender of the tournament.

Despite participating in the tournament since its inception in 1974, Canada had never won a gold medal on home ice. In 1991, that changed.

READ: The greatest Hockey Canada goals of all time

In the gold medal deciding game, Canada got a goal from an unlikely source. Defenceman John Slaney, who had not scored in the tournament, took a hard, low shot from the blue line. The seeing-eye shot found its way through traffic and past the Soviet goaltender, giving Canada a 3-2 win, and the gold medal on Saskatoon ice. 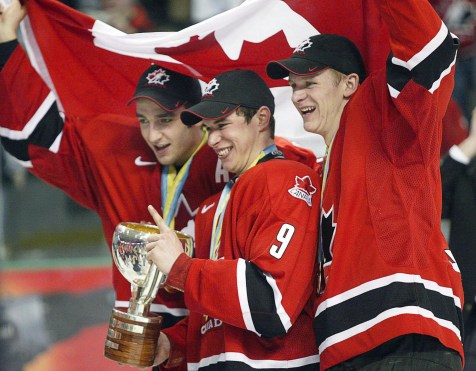 Going into the 2005 tournament, Canada had not won a gold medal since 1997. They’d been close several times, with four silvers along the way. But Canada doesn’t play for second place.

In arguably their most dominant performance ever, the Canadian team outscored their opposition 36-6 through their first five games. The final was no different as they blew Russia away by a score of 6-1.

Led by stars such as Sidney Crosby, Patrice Bergeron, and Dion Phaneuf, it was a team performance that will likely never be equalled.

In a classic semi-final matchup, Canada and the United States found themselves in a 1-1 tie after regulation and overtime. The game would be decided by a shootout.

After the first three rounds of the shootout, the teams once again reached a deadlock, bringing them to sudden-death. International rules allow teams to recycle shooters in sudden-death, and Canada made use of that quirk. Jonathan Toews, who had already scored in the third round, was called upon twice more. In the seventh round, Toews scored for the third time, giving Canada the eventual game-winning goal. 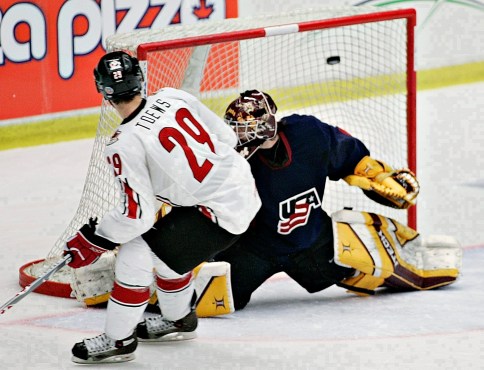 They went on to beat Russia in the final to take home the gold.

The World Juniors have provided some of the greatest moments in Canadian hockey history, and all of Canada will be hoping that trend continues in this year’s tournament.

After a disappointing sixth-place finish at the 2019 World Juniors, Canada will look to bounce back in the Czech Republic with their first game against the United States on Boxing Day.

Will we witness another magical moment?