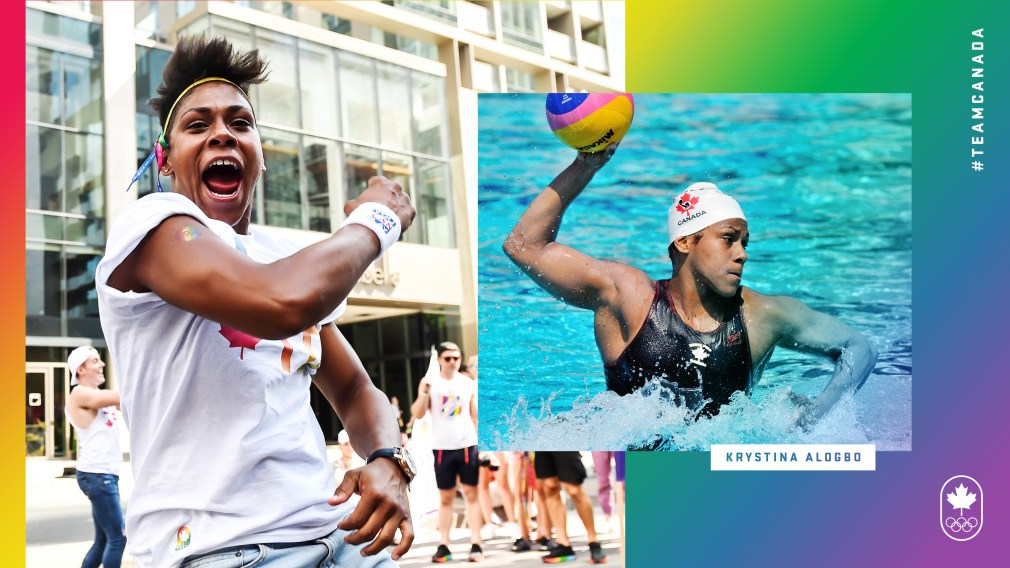 I know to the world I might look like a tomboy, a man, because physically I’m strong, I’m Black and I’m a lesbian.

I know that people see that. But I don’t live by those labels.

To me, how I want to be portrayed and how I believe in myself is that I’m just me.

I’m Krystina Alogbo, no different than any other person. 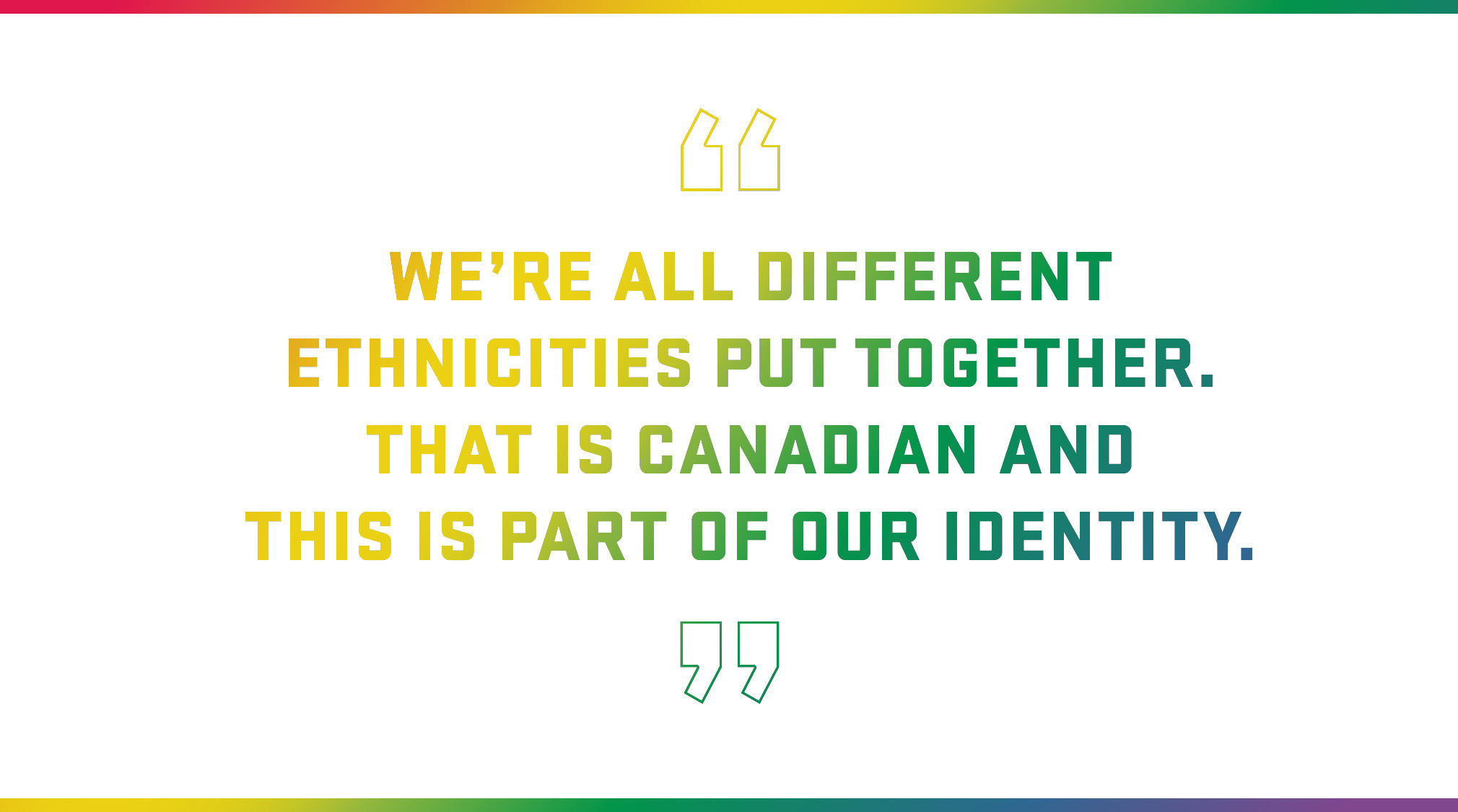 I’ve been in the water since I was three.

My mother, a Caucasian French Canadian, did a great job raising five kids on her own, including four of us who are Black. She didn’t care what anyone thought about her children’s skin colour. We were going to learn to swim and so we did at a small pool in the Saint-Michel neighbourhood of Montreal called René-Goupil.

Within our family, our differences never bothered us. If anybody would ever say something, we would always stand up for each other.

My grandmother, until she passed away when I was five, would always say “God painted you differently.” We were a pretty religious family and our beliefs were always everyone is equal, so there was never anything that made us question that until later, when we were out in the world.

If I look at what’s going on right now in the United States, we’re not even close to being where they are. But yes, we do still have racism here in Canada. I’ve witnessed it.

I’ve had a store clerk think that I stole from him. “Excuse me,” I said back to him, “I’ve paid for every single thing in my life and I’ve worked hard for it.”

Here in Montreal, I’ve been stopped by police three or four times in the last five years just for verification. I was with one of my teammates back in the day, driving her home and a cop car just started following me. We stopped and the cop asked what I was doing. “I’m dropping my friend off, why?” “Oh, well, we’re looking for a Black male.”

I thought, and felt, this: “Every white person you see in the street, would you have stopped them?” But luckily, I kept my calm, sarcastically but politely telling them, first off, they were mistaken as I’m a female and was simply dropping off my teammate. At that moment, I knew I had made them feel just as belittled and insulted as they had made me feel.

After the matter, my teammate, who was in shock at first, was just frustrated and disgusted and could not believe what she had just witnessed. But yet, there again, I had to calm her down more than myself as to me this was my reality and not a new experience.

I’ve never had anything escalate to another level, which I appreciate, but still, why the initial thing? A lot of my teammates and friends see that and say “I’ve never been through anything like that.” I tell them it’s just something you presume and have to know how to speak to the officers or speak to the clerks and handle the situation at hand.

Where I worry is for my young nephews that are of colour. We try to teach them, “Listen, you’re allowed to dress how you want, be how you want, but act with respect, act with kindness. Do not try and be tougher than everybody else because you will be pinpointed out and be punished harder than others.”

We try to keep instilling it because it still goes on the world. 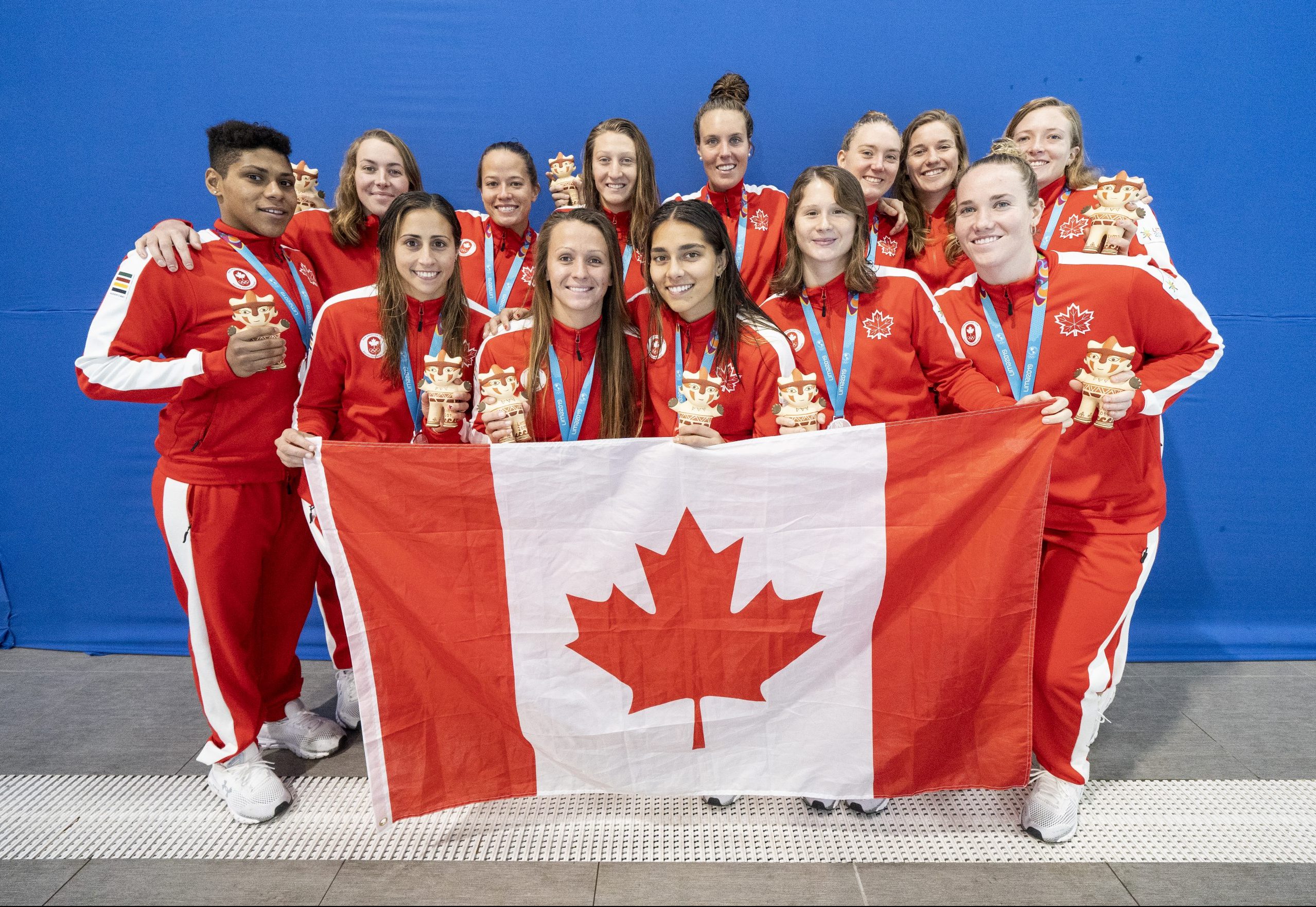 As a national team we’ve always talked about what is our identity? The thing that my teammates and I always bring back up is we’re diverse so use that to our advantage. When you play a Greek team, they’re all Greek; when you play a Russian team, they’re all Russian. But what is Canadian? We’re all different ethnicities put together. That is Canadian and this is part of our identity.

I remember my first junior world championships, my coach Ahmed telling me, “Listen Krys. You’re going to have to realize that you’re of colour. The referees will be harder on you because they will see everything. That doesn’t mean you stop playing. Let them give you the bad calls, we will fix it. But you’ve got to keep in mind that you will get those calls.”

Over time, I’ve reversed it, using my colour to my advantage by showing the white hand on my Black skin. I started getting calls, getting kick outs. So that was my way of flipping it, which helped me in my career, both in the water and throughout life. 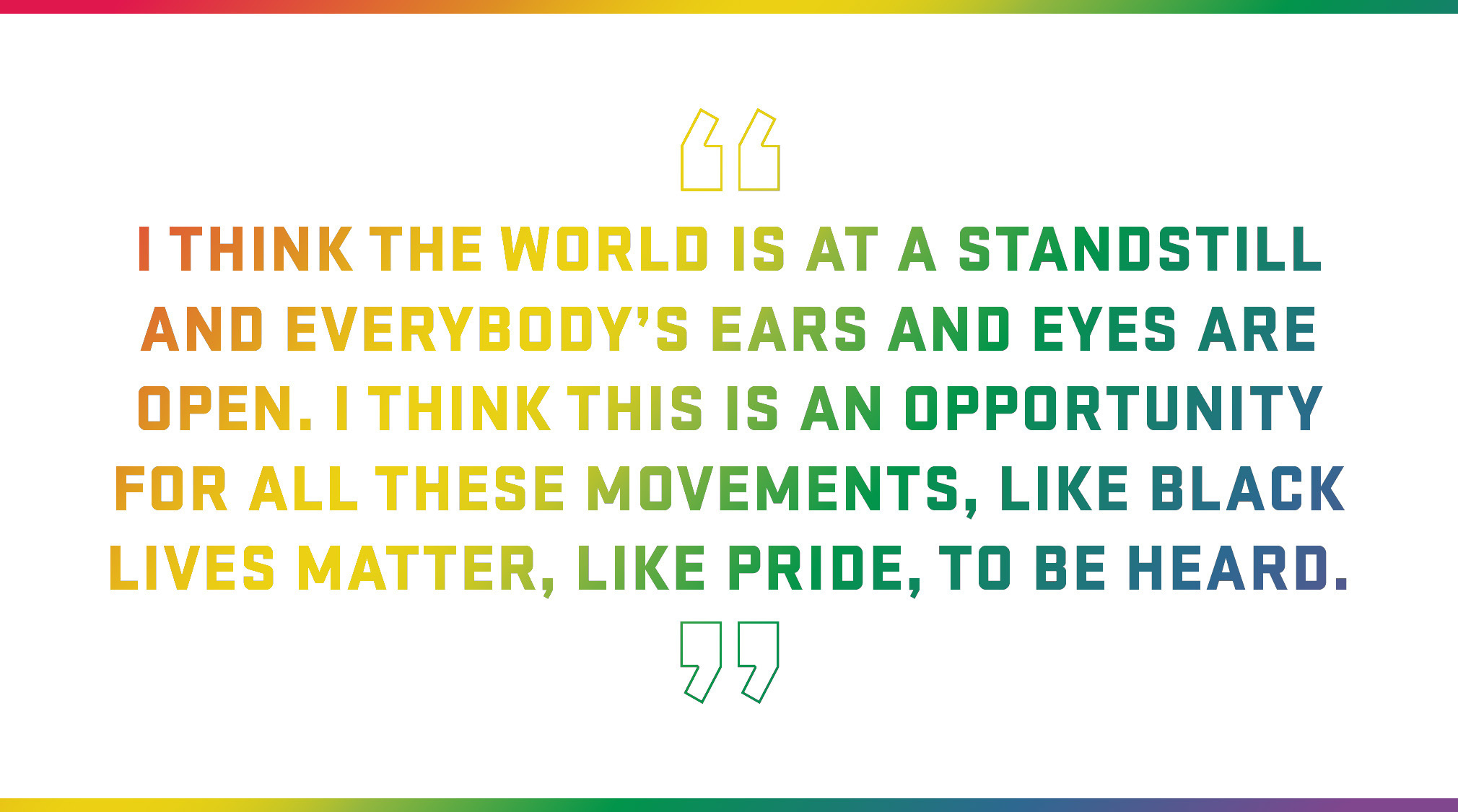 If we weren’t living through Covid-19 and living in isolation right now, people would just be going on about their days.

I think the world is at a standstill and everybody’s ears and eyes are open. I think this is an opportunity for all these movements, like Black Lives Matter, like Pride, to be heard. People have the time to be kind and to acknowledge what’s going on.

For me, I prefer going through the youth because they’re the next generation. They’re the ones that have to keep fighting for this.

I have six nieces and nephews that are going through all different phases of their life. What I explain is that everyone is different. There is not one person the same in this world, even if they have the same colour.

On the outside is just your coat, it has nothing to do with who you are on the inside. If you don’t always show your true inside, then you’ll never understand or be kind to one another if you just go off appearances. 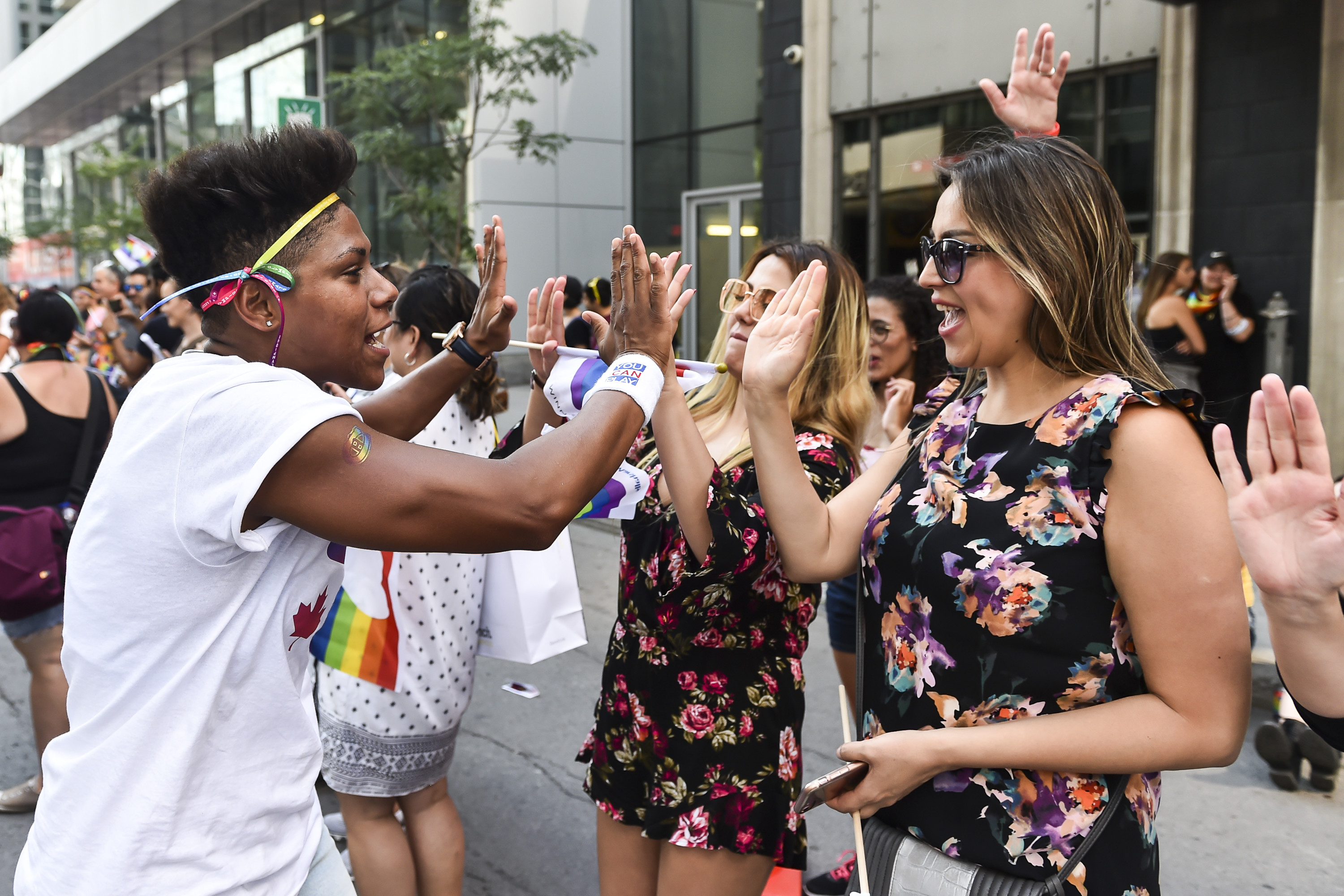 For a long time, I kept it internal, never caring what the world thinks. I went every year to see the Pride celebrations, but when I started to participate is when I saw all the different cultures. There was every single different type of people representing this movement. For me, that opened my eyes into saying, okay, if all these people can do it, I can do it myself too.

A couple of years ago, a close friend of mine who plays on the Russian national team joined me in the Pride Parade with Team Canada. For her, celebrating Pride was a big thing and out of the ordinary. After that she cried, she bawled and was like “I can’t believe how beautiful this is”. It’s not just saying it’s about being gay or not, it’s just about being who you want and not being afraid about who you want to be.

As a national water polo team, we’re still training together during the pandemic, just doing it virtually. We’ve also started getting the community of water polo, kids from clubs across the country to join us.

I’ve been training for the Olympic cycle for over 15 years now and we never had opportunities to go out in the community because it’s so focused on training ourselves that our community never saw what we did.

The message I share a lot with my teammates about Olympic postponement is stay focused on the good because if you don’t then you’re stuck just going in a domino effect on the negative.

The new approach brought me to where I am today: staying positive, staying optimistic, and whatever is going to be thrown at me, I’ll be able to handle it.

Krystina Alogbo is a member of Canada’s National Women’s Water Polo Team, a two-time FINA World Championship medallist, and a four-time Pan American Games medallist. She is looking to make her Olympic debut at Tokyo 2020 where Team Canada will compete in an Olympic women’s water polo tournament for the first time since Athens 2004.

– As told to Paula Nichols