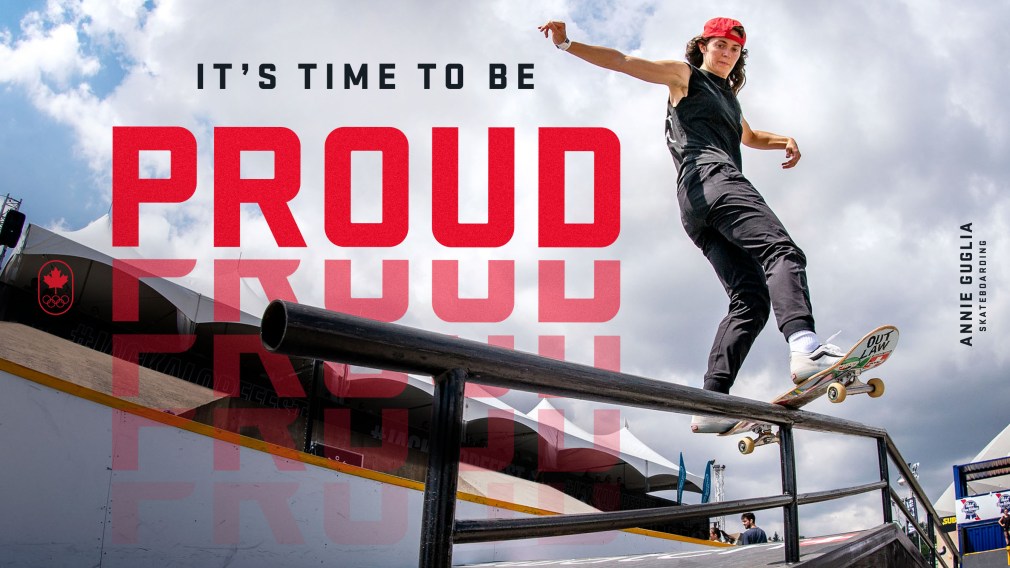 Is the world of skateboarding just a heterosexual boys’ club? Not according to Annie Guglia! The Canadian street skating champion boasts an impressive skateboarding portfolio and she’s ready to take on the world. Her timing couldn’t be better, as the sport is about to make its Olympic debut at the Tokyo Games.

The star skateboarder sat down for a Q&A to tackle the growing space for women in the skateboarding world, her role as an ambassador for the LGBTQ2+ community, and what lies ahead for the next generation of skateboarders. And of course, the importance of being proud of who we are, no matter who that may be.

We won’t deny that skateboarding is kind of a man’s world. What does it look like to be a woman in this world?

Honestly, the timing couldn’t be better.

In my 18 years of experience in the skating community, I’ve never seen more solidarity, opportunity, progression or interest for women in the sport.

To make a long story short, until I graduated high school, I’d dreamed of becoming a professional skateboarder. At 17, I realized how little visibility there was for women in the sport and there wasn’t much progress being made, leading to even less visibility, opportunity, interest and participation. Just overall, a vicious and discouraging cycle for a young teen full of ambitions! I decided to abandon that dream so I could focus on my studies so I could live a ‘normal’ or more ‘realistic’ life.

It’s only now, at 26 with the inclusion of skateboarding in the Tokyo Olympics that my dream of realizing this goal has become possible again in my mind and that’s why I’m here today. I chose to take advantage of this new opportunity and I’ve been able to live off of skateboarding for two years now.

Looking back on it now, I know that I could have persisted and created my own opportunities at 17 but unfortunately, I was too young and didn’t have any female role models in my sport to demonstrate that this was possible.

I want to be that person for the next generation.

Are there still a lot of stereotypes or preconceived notions about skateboarding?

What I can say is that skateboarding has become more socially accepted. Skateboarding is normalized, accepted and it’s a good feeling because it’s a really great tool for personal development for young people and not so young people alike. To make progress, you need to really work on your self-confidence, to be perseverant, resilient and patient, and that makes skating ultimately so positive for a lot of participants. Also, it’s an individual sport but above all it’s a community. All skateboarders know how hard it is to learn a new skill and to become good at it, so we respect each other, no matter what skill level we’re at.

In addition, at the heart of the skateboard community, diversity is becoming more and more celebrated and that’s so positive and encouraging

When I started skating, we thought of ourselves as avant-garde, like a subculture, but in reality, it was very homogenous and exclusive. It was mostly straight white men who glorified the extreme performance aspect of skateboarding. Very little diversity at all levels.

The skateboard community has become so much freer and more inclusive and I’ve grown more and more proud of it.

Pride Month is almost over, and I just wanna say that we owe it in big parts to black trans women. Pride wasn’t a rainbow on June 28th 1969, it was a riot. Thanks to all the LGBTQ+ leaders who paved the way for us. I can be myself in 2020 ONLY because of all the queens who fought for their rights 51 years ago and didn’t take no for an answer. I am thankful. All Black Lives Matter. Black Trans and Queer Lives Matter. Protest for them like they did for you. Pride wasn’t cancelled this year, it’s the most authentic it’s been in a long time. ✊🏻✊🏼✊🏽✊🏾✊🏿❤️🧡💛💚💙💜🤍🤎🖤 #stonewallriots #marshapjohnson #pridemonth

You’ve said in interviews past that you don’t feel like an LGBTQ+ activist. However, that hasn’t stopped you from being an advocate for this community. How do you see your role?

Great question! For me, the term activist makes reference to acting and actively fighting something, and as I don’t consider myself to be at the forefront of the fight for LGBTQ2+ people, I don’t want to take credit for that work.

That said, I am openly lesbian and I 100% support all initiatives aiming for equality for all.

I see my role in this community as being a positive role model. It’s a weird thing to say about oneself but overall, I try to make myself visible whenever possible and use the platforms offered to me to show that this is just normal. I don’t understand those who spread hate against others based on something that doesn’t concern them or take anything away from them.

Clearly, you’re a role model for young girls, not only for the way that you’ve stayed true to yourself in this environment but also for your perseverance and leadership to help advance the sport, particularly for women. What does it mean to you to have become this role model?

I think that my journey, my character and what I have accomplished could be inspiring for two reasons: either because I’m different from the masses, or because I’m similar to ‘you’ in one way in particular.

Ultimately, I’m just trying to be myself and stay real. If that’s inspiring for other people, then even better and I always love to hear that.

Being yourself is so important, because there is no one but you that can be you. I’ve said it in interviews before, but I believe that each person has a unique added value in this world and it’s by staying authentic that we’re the most inspiring and the happiest.

A girl should be two things: Who and what she wants. 💜 #InternationalWomensDay

And looking forward… what legacy do you think you will or aspire to leave behind?

Since 2006, I’ve tried to promote skateboarding for womxn. Fourteen years later, participation rates among womxn are three times higher than among mxn according to a study I read.

What I hope to impart upon skateboarding is enough visibility that the general public understands that skateboarding is for everyone. I am a Canadian lesbian, I’m 29 years old with a master’s in business strategy and I’m a professional skateboarder. If that can inspire anyone or prove anything, let’s gooooo!

Who are some of your role models? Not necessarily LGBTQ2+ or from the skateboard world, but in general?

Personally, what inspires me most these days is people who are mentally strong and/or emotionally mature. Personal development and mental toughness are new subjects to me, and I find it really inspiring.

I realized recently that I’m too focused on performance, on accomplishments and on the image that others have of me and sometimes, that prevents me from taking full advantage of each moment.

Put like that, it may seem really corny! But it’s really important and the way it influences me is that I always try to focus on the things I can control before all else and to appreciate the process and present moment, rather than focusing on only the results or the end goal. I see my path to the Olympics a little like that. I’m trying to appreciate it all, because if you’re only focused on the end goal but you didn’t like the rest, was it really worth it? 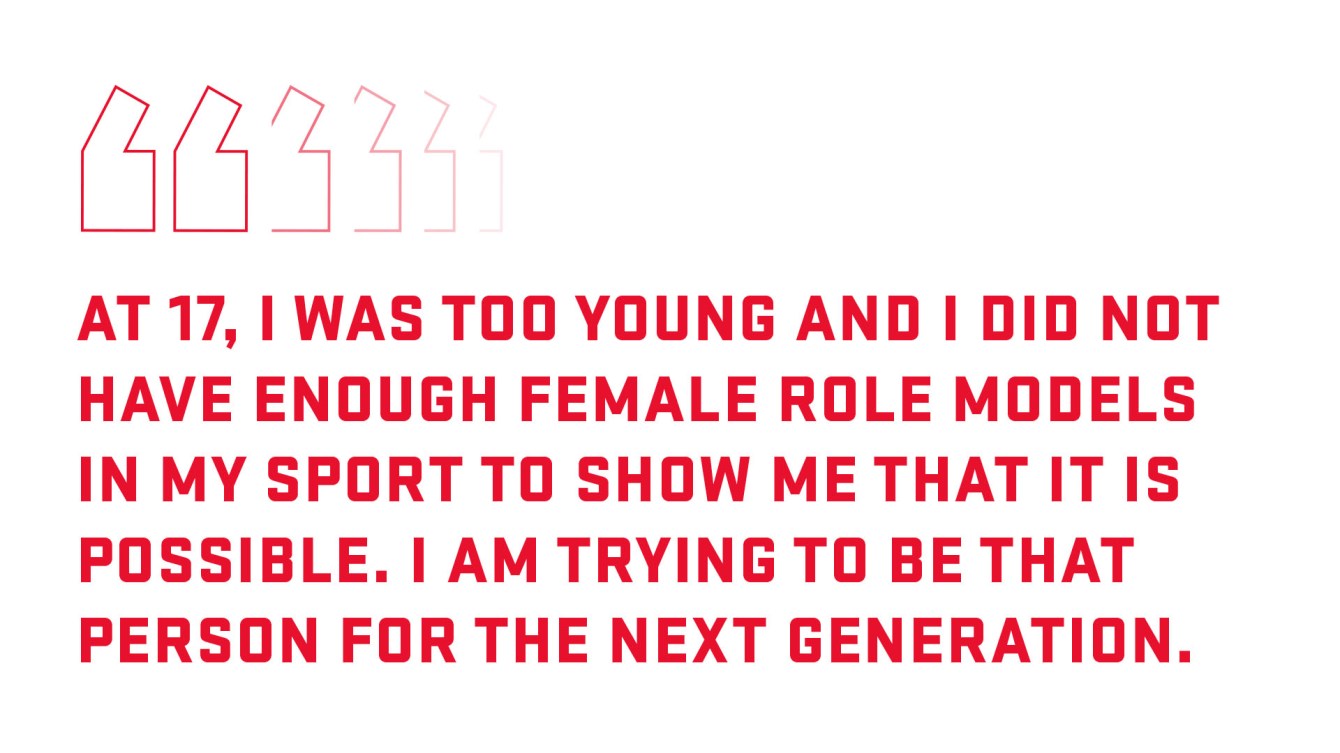 What would you say to a young girl who might be afraid to or hesitant to throw themselves into the world of skateboarding… or any sport?

And for young girls in particular, I would say: believe in yourself and do what you love. The bigger your dreams are, the more difficult they’ll be to attain but even if you feel like it’s impossible, know that you can create your own opportunities. More concretely, have a vision of where you want to be, concentrate on smaller attainable goals that will one day lead you to where you want to be, and don’t hesitate to change your mind and adjust your course if you find something else that moves you. The most important thing in life is that it’s not the final destination, but the road that leads you there that will make you happy and take you from point A to point B.

¹ The use of the spellings ‘womxn’ and ‘mxn’ aims to include all types of men and women, including trans people, non-binary people and people of colour.

Annie Guglia is a Canadian skateboarder who represents the best Canada has to offer ahead of the 2020 Tokyo Olympics Games. She was crowned Canadian street skating champion in 2020, vice-champion in 2019, and brought home the Empire Open title in 2018. In addition to being a pro skateboarder, Annie wrote her master’s thesis on the skateboarding industry between 2015 and 2017.

This interview took place over email.