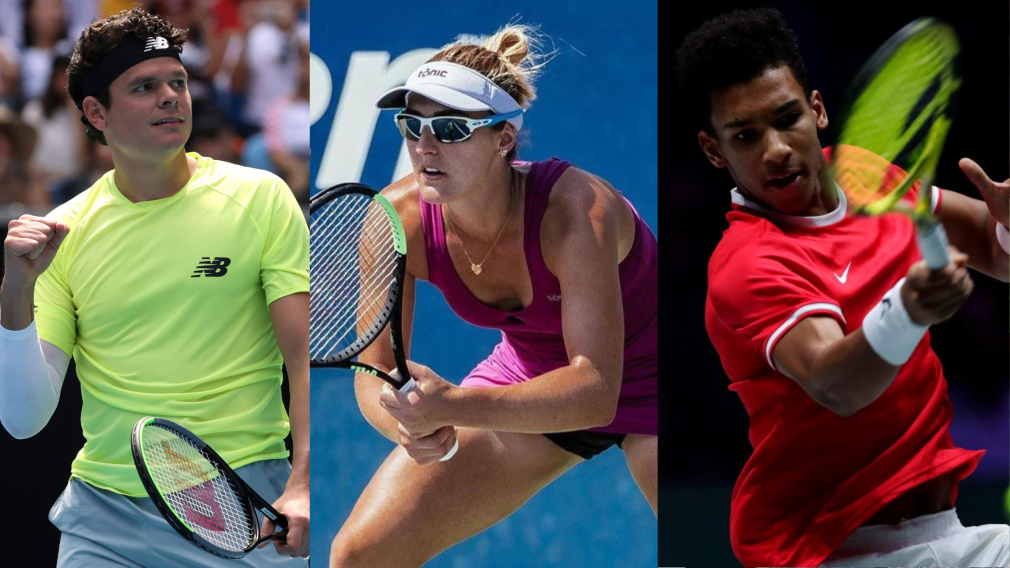 After the French Open was postponed to late September and Wimbledon was cancelled due to the COVID-19 pandemic, Grand Slam tennis will officially be back when the US Open starts on August 31.

Reigning women’s singles champion Bianca Andreescu has decided to focus on her health and recovery, rather than defend her title, but there will still be plenty of CanCon in New York.

Dear fans, After many discussions with those closest to me, I have made the difficult decision not to return to New York this year. I have taken this step in order to focus on my match fitness and ensure that I return ready to play at my highest level. The US Open victory last year has been the high point of my career thus far and I will miss not being there. However, I realize that the unforeseen challenges, including the Covid pandemic, have compromised my ability to prepare and compete to the degree necessary to play at my highest level. I want to express my appreciation to the USTA and the WTA for all of their efforts in making the event happen. I look forward to joining my competitors back on court soon. B

Shapovalov has been seeded 12th in the men’s singles tournament – the highest among Canadian players. He entered the Western & Southern Open as a warmup, with the Masters 1000 tournament usually held in Cincinnati relocated to the US Open venue, but suffered a heartbreaking second round defeat against Germany’s Jan-Lennard Struff.

Can’t wait to finally be back competing 💪🏻 🐺 #thewaitisover

Prior to the season being put on pause in March, Shapovalov’s last appearance was at the ATP 250 in Marseille, France at the end of February where his journey ended in the quarterfinal against Alexander Bublik of Kazakhstan. Until the forced break, Shapovalov posted 4 wins and 7 losses in 2020. Highlights included victories against German Alexander Zverev and Greek Stefanos Tsitsipas, ranked seventh and sixth, respectively, at the ATP Cup in early January.

After having to face off against friend and countryman Félix Auger-Aliassime in the first round of the US Open the last two years, Shapovalov will have his first ever meeting against American Sebastian Korda (ranked 225) in his tournament opener. He is the same section of the draw as world number one Novak Djokovic, setting up a potential meeting in the quarterfinals.

Raonic has been given the 25th seed in his return to the US Open after missing the 2019 edition of the tournament with a glute injury. On the other side of the net in his first round match will be Argentinian Leonardo Mayer. Raonic won their only previous meeting back in 2015.

Raonic won’t go unnoticed in New York, with his grown out locks earning (almost) as much attention as his recent level of play. At the Western & Southern Open, he upset Tsitsipas, the tournament’s fourth seed, in straight sets to reach the final.

Raonic enjoyed a strong start to 2020, making it to the second week of the Australian Open thanks to wins over Tsitsipas in the Round of 32 and former US Open champion Marin Cilic of Croatia) in the Round of 16. Before the season was halted, Raonic had earned 7 wins against 4 losses, with his last match coming in the semifinals at the ATP 250 in Delray Beach, Florida in late February.

If you’re wondering about what the 13-season pro circuit veteran got up to during quarantine, listen to what he said about his intensive training on Tennis Canada’s Match Point podcast at the end of June.

The 20-year-old Montrealer is seeded 15th in men’s singles and will be looking to advance from the US Open first round for the first time in his career. His opening opponent will be Brazilian Thiago Monteiro, ranked 82nd in the world, in their first head to head matchup.

Preparation going well so far👍🏽😅 Swipe for some actual tennis with @denis.shapovalov

Auger-Aliassime has been finding playing time in recent weeks. Before the Western & Southern Open, where he also bowed out in the second round after a superb battle against American Tennys Sandgren, he competed in the Ultimate Tennis Showdown (UTS), an independent tournament organized by his summer training facility, the Mouratoglou Tennis Academy in France, in early August. Auger-Aliassime made it all the way to the UTS final, where he was defeated by Alexander Zverev (whom he seems to have bonded with over the last few months, judging by his Instagram stories!). Fun fact: a new nickname, “The Panther”, was bestowed upon Auger-Aliassime during that tournament.

Before August, the young Canadian had not played in an official match since the ATP 500 in Acapulco, Mexico in late February. Prior to the pandemic-forced pause, he had recorded 13 victories against 9 losses in 2020.

Pospisil will be the only Canadian singles player at the US Open not to have participated in a tournament since competition resumed. He played his last match at the end of February at a Challenger tournament in Calgary, which brought his 2020 record to 8 wins and 5 losses.

Among his memorable matches were wins against Russian world number five Daniil Medvedev, Belgian David Goffin (ranked 10th) and his compatriot Shapovalov. He also made it to the final in Montpellier, France, but lost to local favorite and world number nine Gael Monfils. He did take the doubles title with Nicolas Mahut at that tournament.

Pospisil resumed training a few weeks ago with his coach Frank Dancevic. During the spring and summer, he notably co-hosted Tennis United, a joint ATP and WTA talk show featuring tennis stars as well as top athletes from other sports. Wayne Gretzky and Steve Nash paid the show a visit, along with several Canadian tennis players.

Few clips from the Canadian #TennisUnited episode. Full show and interview out now on ATP’s Facebook page. This was a fun one :) Shoutout to Johnny Mac 😂

His first round opponent will be 36-year-old German Philipp Kohlschreiber, currently ranked 74th. Pospisil won their only previous encounter in 2015.

Looking ahead, an all-Canadian matchup between Raonic and Pospisil could take place in the second round.

In recent months, the young rising star of Canadian tennis has amazed us every time she was on the court. At just 17, the only Canadian woman in the US Open singles draw could make some waves in New York.

Just a couple of weeks ago, she qualified for the main draw at the Top Seed Open in Lexington, Kentucky, advancing to the Round of 16 with a win over former US Open champion Sloane Stephens for the second time this year. She was also in the main draw at the Western & Southern Open.

In her last tournament before the forced break in March, Fernandez reached the quarterfinals in Monterrey. The week before, she played in her first career WTA final in Acapulco. The Australian Open in January had marked the first time she qualified for a Grand Slam main draw.

During the summer, she continued to train in Florida with her family and had a few friendlies against other players in the area. Knocking on the door of the top 100, Fernandez will start the US Open against Russian veteran Vera Zvonareva, who was once ranked as high as second in the world but now sits at 270.

It wouldn’t be a Grand Slam without Dabrowski in the doubles tournament. At the US Open, Dabrowski will join forces with American Alison Riske, a tandem formed for the Western & Southern Open. Over the last few years, Dabrowski has played mostly alongside Yifan Xu of China. Prior to the pandemic, she had advanced to the final of the Qatar Total Open with Latvian Jelena Ostapenko in late February.

That had been her second final appearance of the year, after she made it to the final at the Adelaide International in January with Croatian Darika Jurak. For the first two months of 2020, Dabrowksi went 11-4.

Keep calm and row on

During the forced break, Dabrowski did not slack off and continued training ahead of a return to play. She also kept us in the loop over her social media!

Fichman is one of the players who stayed on court until the tours shut down in March – and she went into the hiatus on a high note. With Ukrainian Kateryna Bondarenko, Fichman claimed the doubles title in Monterrey, Mexico. That had been the climax of a strong start to the season, which included one other final appearance as well as two semifinals.  Her record for 2020: 12 wins, 6 losses.

For the US Open, one of her favourite tournaments, Fichman will be teaming up with Darija Jurak of Croatia – yes, the same who helped Dabrowski to a final in Adelaide.

Health and safety measures at the US Open

It goes without saying that this US Open will not be like any that came before it. The organizers are imposing strict health and safety measures on all individuals present at the tournament.

You can see everything put in place here, but as a quick snapshot: