Then and Now: How sports have evolved over the decades

Then and Now: How sports have evolved over the decades 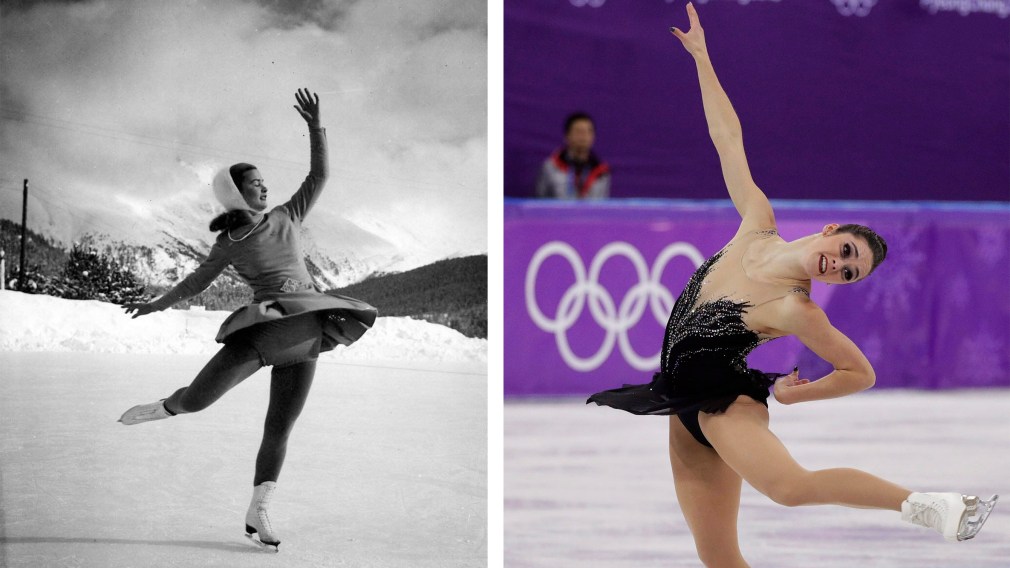 When you first think of science, you may not easily make the connection to sport.

However, science plays a major role in sports, in more ways than one.

Think of the mechanics at work in the way an athlete’s body moves perfectly over a high jump bar, or the elements used in equipment that would completely change sports as we see them today.

Here are eight sports that have undergone unique transformations over the decades – and even centuries – to become what we know and enjoy today.

Then: The first ice skates didn’t serve the purpose of performing jumps and spins – they were simply used as an essential means of winter transportation. According to Frederico Formenti – a physiologist and sports scientist at King’s College London – skates in the 15th century were as popular as cars are today.

Looking at it through the lens of the sport, figure skating used to look completely different than it does now. In the beginning, only men participated, until Brit Madge Syers entered the 1902 World Championships. It wasn’t unusual for competitions to be held outdoors, with men in full suits and women in long skirts. The boot of the skate also reached much higher on the leg. 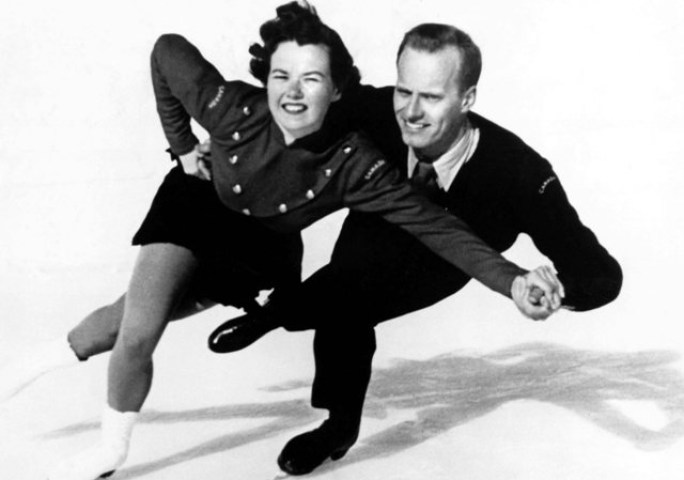 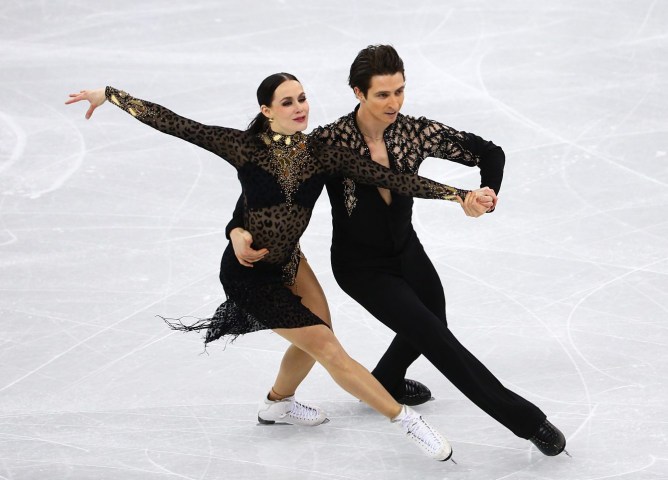 Now: Men and women are constantly pushing the technical boundaries of the sport, with quadruple jumps becoming the norm – something the outfits and skates of old would have hindered. Competitions are now always indoors and, since athletes no longer have to worry about the weather, the outfits are all about standing out and echoing the character in the routine. There have also been modifications to the skates, with the boot rising much lower on the leg than before. That makes it easier for skaters to point their toes, which results in a greater ability to ‘spring’ off the ice. Lower rise boots also allow for much more agility and ankle articulation for jumping and basic skating skills. Thicker material around the ankle provides more protection, absorbing pressure during takeoffs and landings of those three- and four-rotation jumps.

Then: Clint Benedict was the first goalie to wear a mask in a game, doing so on February 20, 1930. However, it was very different than what we picture these days. His mask was made of a basic leather that covered his nose, cheeks, forehead, and mouth while leaving his eye completely open.

Almost three decades later, on November 1, 1959, Jacques Plante was struck in the face by a slapshot and was badly cut on his nose. The Montreal Canadiens goalie had built a fiberglass mask in his spare time and had been using it in practice to protect himself and decided it was time to pull it out. The Canadiens went on an 18-game winning streak, only losing to Detroit when Plante was forced to remove his mask. After that, the mask was there to stay, and other NHL goalies began to emulate him. 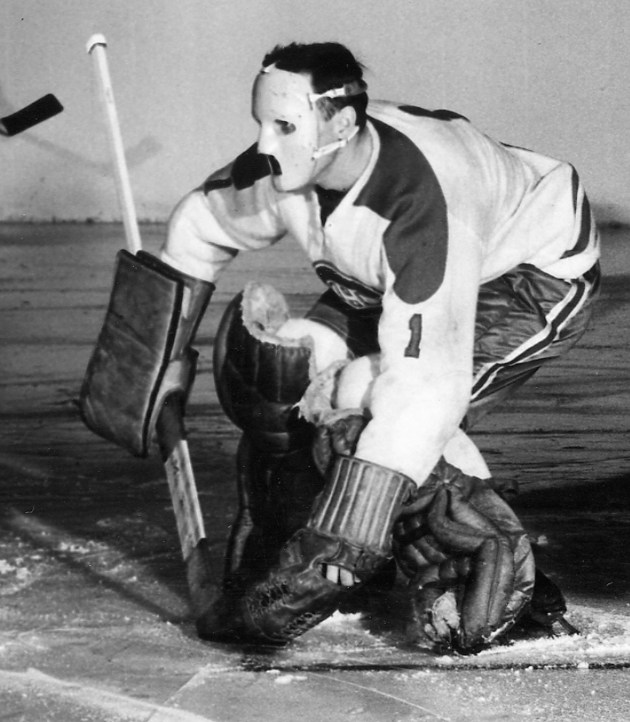 Jacques Plante is shown in a 1959 photo, wearing his mask, in action against the Toronto Maple Leafs. Fifty years ago Monday at Madison Square Garden in New York, Jacques Plante of the Montreal Canadiens changed hockey. By the time Plante retired in 1975 every NHL goalie wore a mask and wouldn’t dream of playing without one. THE CANADIAN PRESS/Alexandra 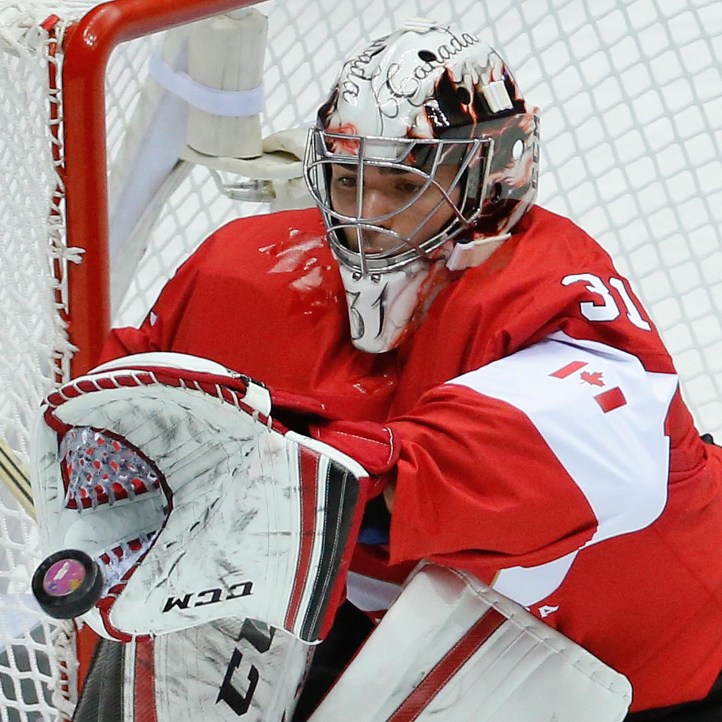 Carey Price makes a glove save

Now: Athlete safety is a top priority, so not only does the goalie wear a mask, but the rest of the team also has protective headgear. The goalie mask is still made of fibreglass but has gained padding and an increase in thickness over time. Goalies have even opted for the full cage for better equipped protection. And though it may be a necessity, the goalie mask has also become a canvas for art that showcases the personality of the wearer.

Then: Ski jumping can be traced back to Norwegian Ole Rye who jumped 9.5m in 1808. In the early 1900s, his countrymen Jacob Tullin Thams and Sigmund Rudd developed a new jumping style referred to as the Kongsberger technique. Athletes jumped with their upper body bent at the hips with a wide forward lean and their arms extended at the front with their skis parallel to one another. This technique lasted until the 1950s, when the Daescher technique proved to provide better results. Athletes would fold their arms back alongside their body with less of a bend at their waist. 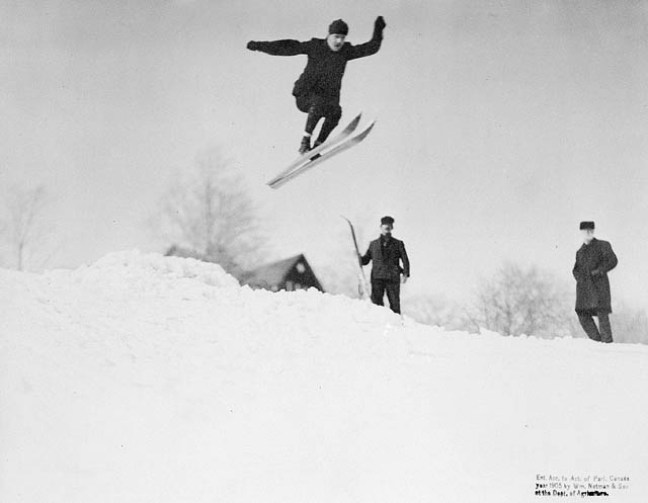 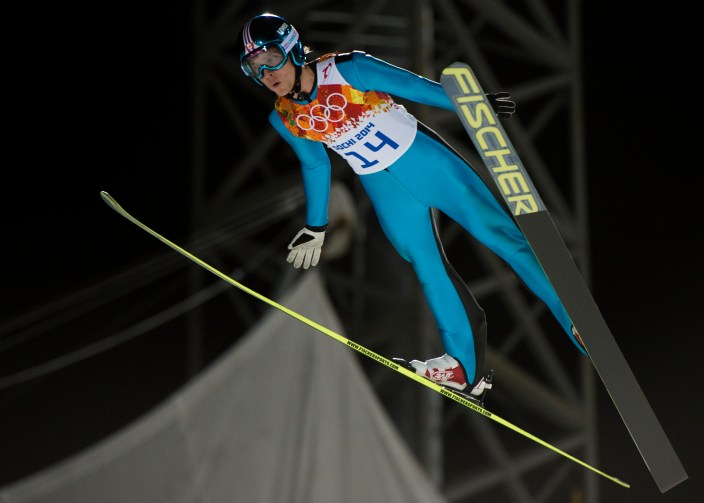 Now: The above technique lasted until the 1980s, when Jan Boklov introduced the V, which has been the preferred technique since all the 1992 Olympic medallists used it. The V technique is similar to Daescher’s, with athletes still keeping their arms back, however the skis are now placed in a flying “V” shape to allow for more lift and even longer jumps.

Then: Just like skating, rowing actually began as a means of transportation, with organized racing beginning in the 1820s at the universities of Oxford and Cambridge. The sliding seat was introduced to England 50 years later, so crews could use leg drive as well as arm power. Racing boats (known as shells) and blades used to be wooden. 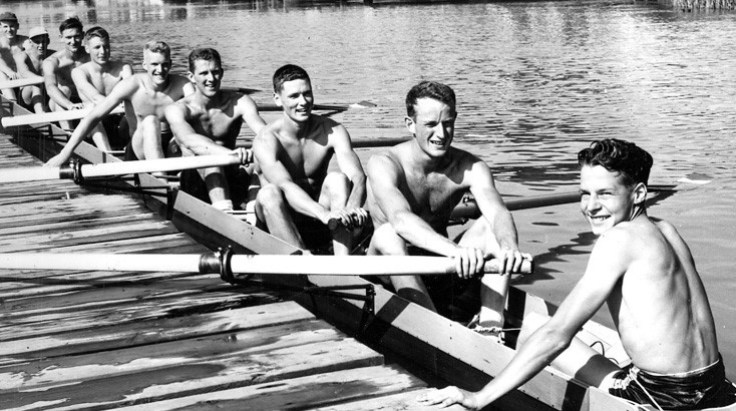 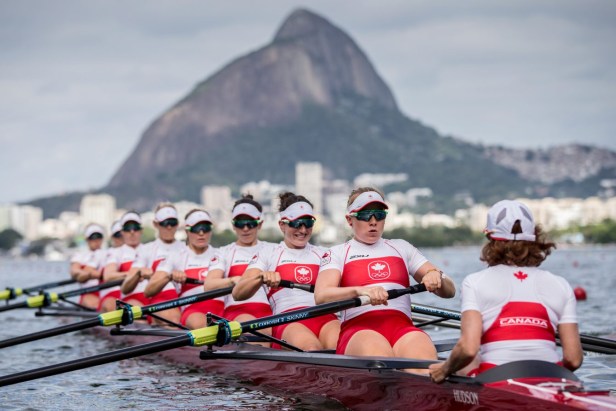 Now: Modern shells are made from a composite material – usually a double skin of carbon-fiber reinforced plastic and honeycomb material – for strength and weight advantages. Blades, otherwise known as oars, are also commonly made of carbon-fiber.

Then: Tennis used to be played at a much slower pace, with more points won at the net after a succession of volleys rather than through power. Athletes used wooden-framed rackets which were 9 inches wide and 27 inches long. The netting of the racket was made of natural gut, which was heavily affected by weather conditions. Contrary to today, athletes always wore all-white outfits in competition. 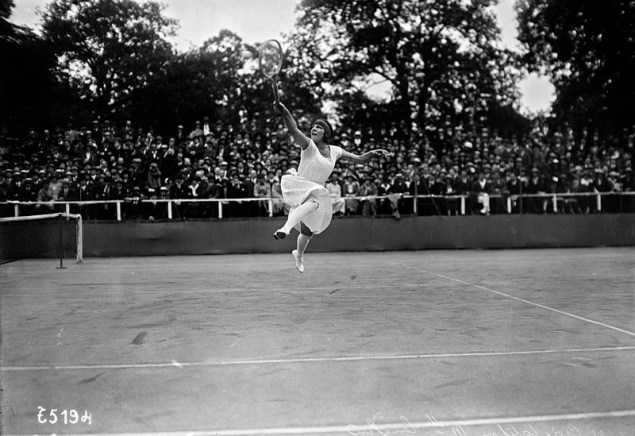 Suzanne Lenglen in action during a photoshoot. (Photo : TennisForum.com) 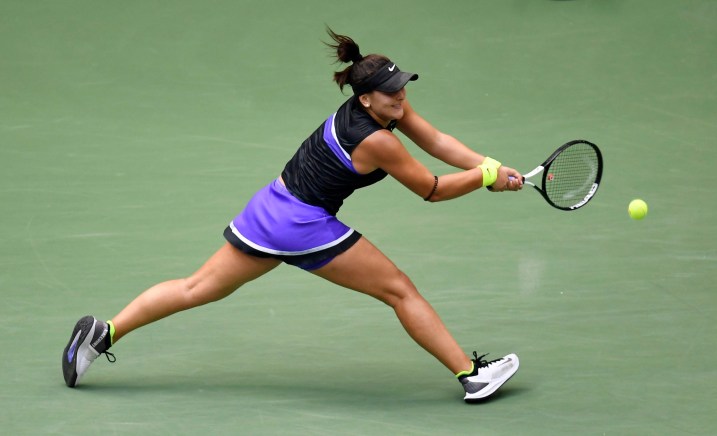 Bianca Andreescu, of Canada, returns a shot to Serena Williams, of the United States, during the women’s singles final of the U.S. Open tennis championships Saturday, Sept. 7, 2019, in New York. (AP Photo/Sarah Stier)

Now: Tennis is a fast-paced game of power. Points are often earned through explosive exchanges from the baseline rather than volleys by the net. Rackets are now much lighter as they are made of graphite and composite materials, sizing in at 10-12 inches wide and 27 inches long. These changes allow players to swing the racket faster and have a larger surface area to make good contact. Possibly the most eye appealing change that the sport has gone through, is its fashion. Players are now becoming more adventurous with fun and colourful outfits, except at Wimbledon where the all-white rule is still in place.

Then: The first recorded high jump event took place in Scotland in the 19th century, with early jumpers using either a straight-on approach or a scissors technique. The scissors technique entailed approaching the bar diagonally and having the jumper throw their inside leg over first, following with their outside leg in a scissoring motion, finishing on the sawdust landing pits. 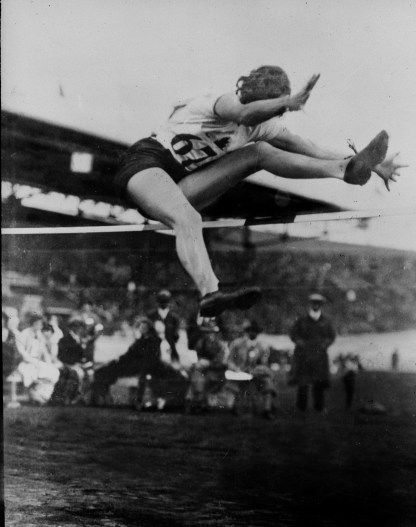 Ethel Catherwood of Canada, winner of a gold medal in the women’s high jump event at the Amsterdam 1928 Olympic Games (CP PHOTO) (National Archives of Canada) 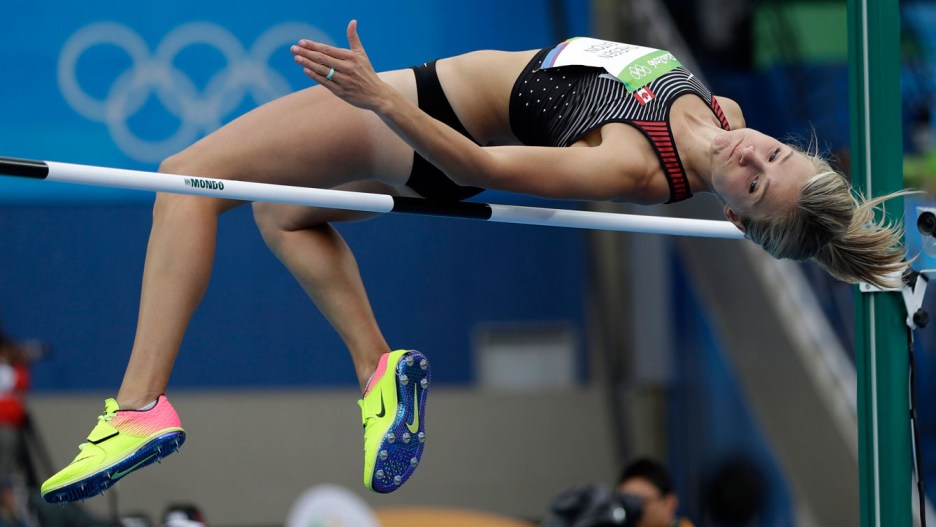 Now: Dick Fosbury is the athlete that brought the high jump into the next century. He took advantage of the new raised, softer landing pads in use and added a twist in his method. He guided himself over the bar head and shoulders first, landing on his back – a technique not possible on the old landing pads. Since he used it to win Olympic gold in 1968, the “Fosbury Flop” became the preferred method by the best high jumpers in the world.

Then: Once upon a time, athletes didn’t wear anything on their heads for protection. Eventually, strips of leather-covered padding called “hairnets” were worn, which didn’t really help with the initial impact of a crash. As for the bikes, they were made of steel with wheels that looked similar to those on leisure-use bicycles. 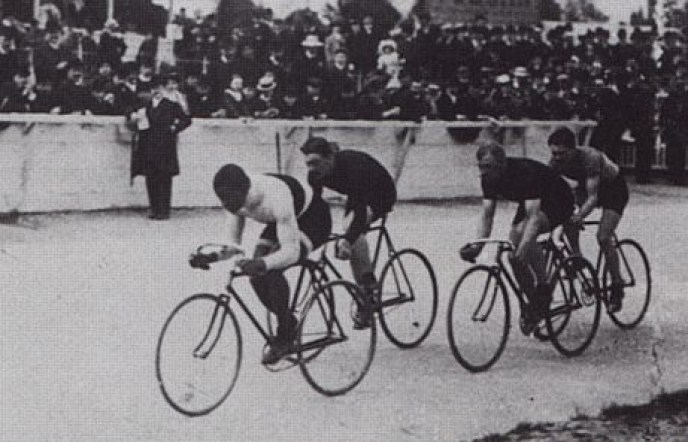 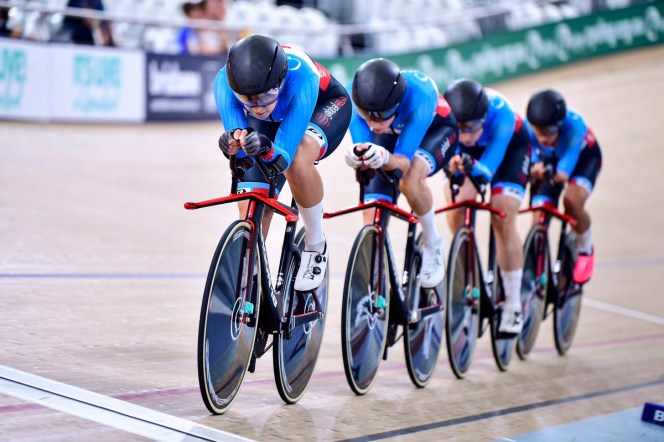 Now: Cyclists now wear modern skinsuits and tapered helmets that offer better protection and aid in cutting through air in order to move faster. The bikes are now made of carbon fiber and, in some events, have a disc wheel that acts as a sail to also help in cutting the air.

Then: Speed skating originated in the Netherlands, where skates were first made from polished shank or rib bones of animals. The skates were upgraded to highly waxed wooden runners in the 14th century and upgraded once again to iron blades in the 16th century. For about the first 100 years of officially organized world championships, blades were fully affixed to the boot. 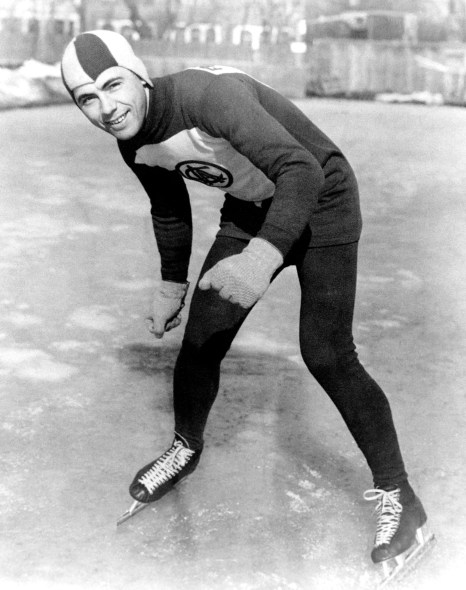 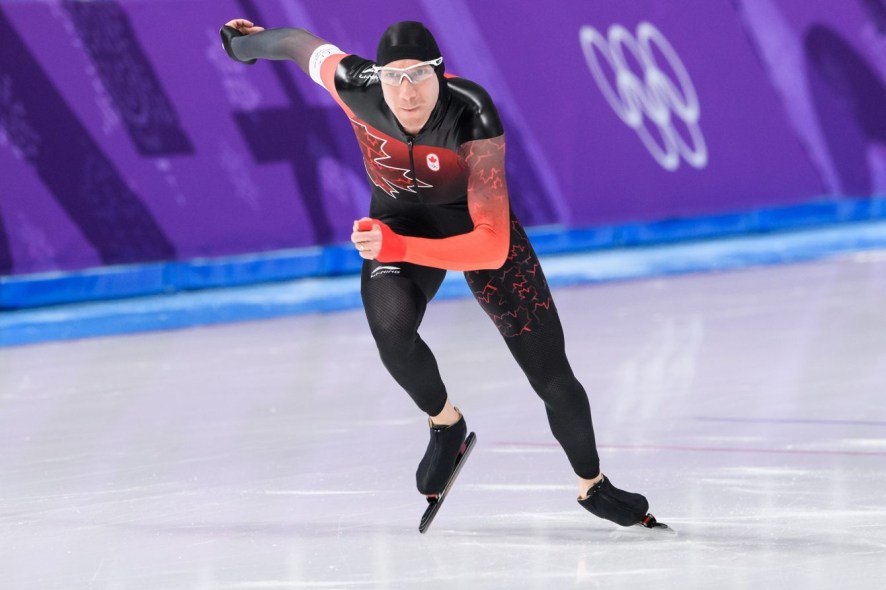 Ted-Jan Bloemen of Canada competes during the Men’s 5000m Speed Skating event on day two of the PyeongChang 2018 Winter Olympic Games at Gangneung Oval on February 11, 2018 in Gangneung, South Korea.(Photo by Vincent Ethier/COC)

Now: In the mid-1990s an old idea became new again and made long track speed skaters even faster. The clap skate has designs dating back to the 1890s. It featured a hinge at the toe of the boot which allowed for greater extension and a longer stride but wasn’t used in competition. In the 1980s, the clap skate re-emerged and some Dutch skaters began to show great improvement in their times. The big switch happened in the 1997-98 season when most competitors decided to wear clap skates. Soon, the distinct sound of the clap skate could be heard as world records fell.

When it is planted on the ice with weight upon it, the blade describes a nearly straight line. Clapskates provide a more beneficial position to the athlete for generating power at the knee.