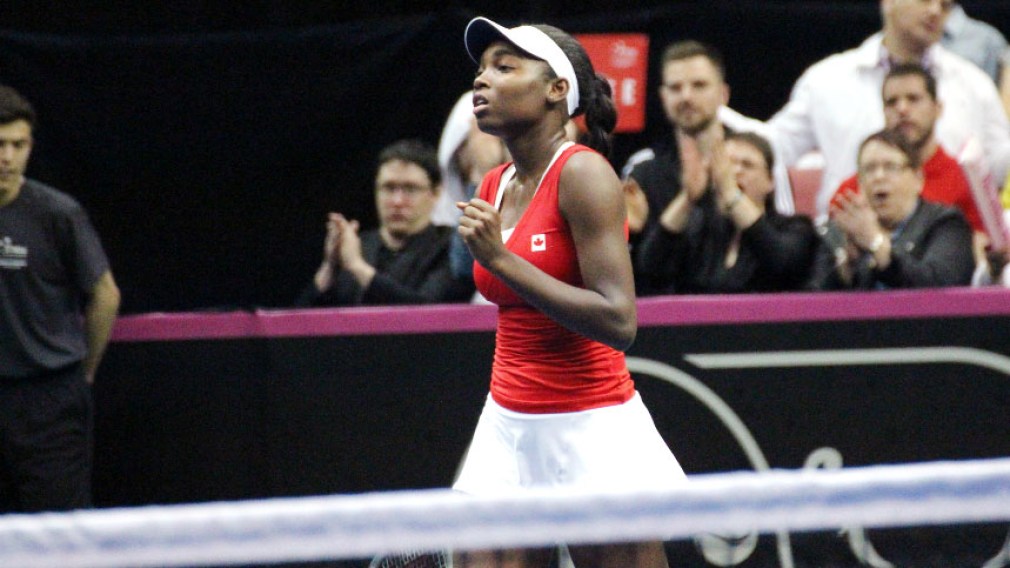 Françoise Abanda has been a rising star in Canadian tennis since she began training at the National Training Centre in Montreal in 2009. In 2012 she made the junior Wimbledon semifinals at age 15, coming within a set of making it an all-Canadian final against Genie Bouchard. Abanda hit her career high junior ranking of fourth in April 2013, but that season was hampered by a shoulder injury. She won her first professional title at the ITF $25,000 event in Port St. Lucie in January 2014. That June she reached her second junior Grand Slam semifinal at the French Open, but lost to the top seed. She played in her first Grand Slam main draw at the 2014 US Open. Abanda played Fed Cup for Canada for the first time in 2015. In April’s World Group Playoff versus Romania she earned her first victory against a top-50 opponent, defeating world number 33 Irina-Camelia Begu. Abanda’s career high WTA singles ranking of 175 was reached in October 2014.

Family: Parents Blaise Abanda and Cicle Assono Ahibena are originally from Cameroon… Older sister Élisabeth plays NCAA tennis at Barry University… Getting into the Sport: Started playing tennis at age 7, following her older sister into the sport… The first sport she had ever tried was speed skating… Odds and Ends: Cameroon’s national soccer team, Les Lions Indomptables, is her favourite sports team… Childhood idols were Serena and Venus Williams…