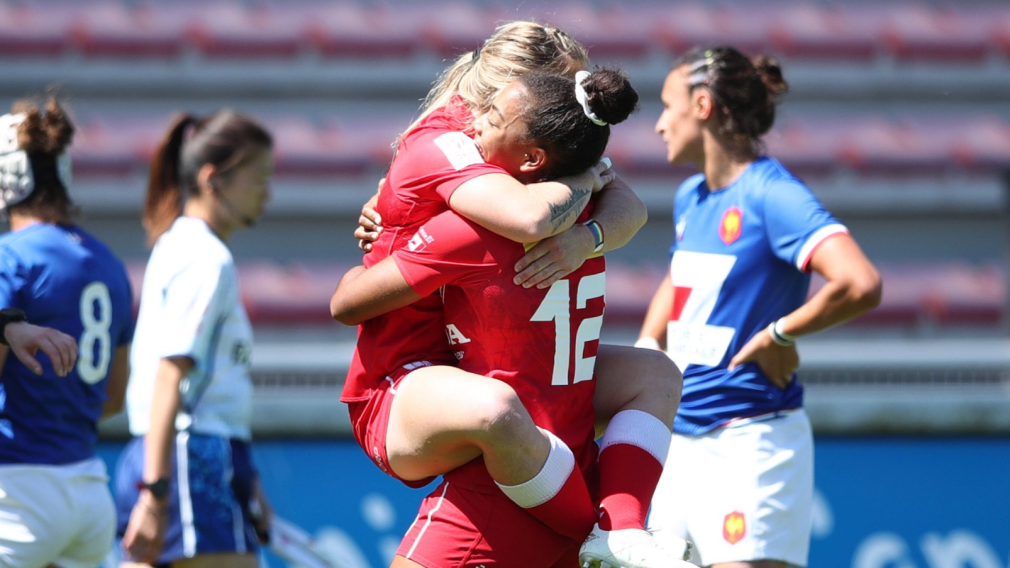 The Canadian women’s rugby sevens team are celebrating a bronze medal alongside their 2020 Olympic Games qualification after the World Series Sevens tournament in Biarritz, France.

The Canadians completed their season by securing the World Series Sevens bronze medal after beating Spain 19-14 on Sunday, and their qualification to the 2020 Olympic Games on Saturday.

After previously defeating Spain 22-19 in the tournament, the Canadians knew what they needed to accomplish in order to win the bronze medal on Sunday. Team Canada started out by maintaining a strong defence to ensure an early lead over Spain. Bianca Farella and Brittany Benn both earned a try for a 12-0 lead. The Canadians were up 12-7 at halftime.

Spain took advantage of a punched ball out of the hands of Charity Williams and scored a try to advance 14-12 over the Canadians.

Later on, Breanne Nicholas blocked a kick and Williams raced down to earn the winning try for the bronze medal.

FULL TIME: What a thriller!!! @BreanneNicholas blocks the kick and @charity_7s burns it down for the winning try! Canada end off the series with #Olympic qualification and a bronze medal 🏉🍁 #RugbyCA #RC7s #BiarritzSevens

Previously, Team Canada lost 27-14 to Australia. Although, earlier this morning, Canada took over France and beat the home team 12-5 to move on to the semi-finals. Team Canada then fell 21-12 to New Zealand in the Cup semifinals before heading to their bronze medal game.

The 2020 Olympic qualification came after a 27-10 win over Ireland on Saturday. Team Canada went 2-1 in pool play to automatically guarantee them a top-four position in the World Series Sevens standings, and a spot for the Tokyo 2020 Olympic Games.