Adventure, culture and food: 9 things Peru is famous for

Adventure, culture and food: 9 things Peru is famous for 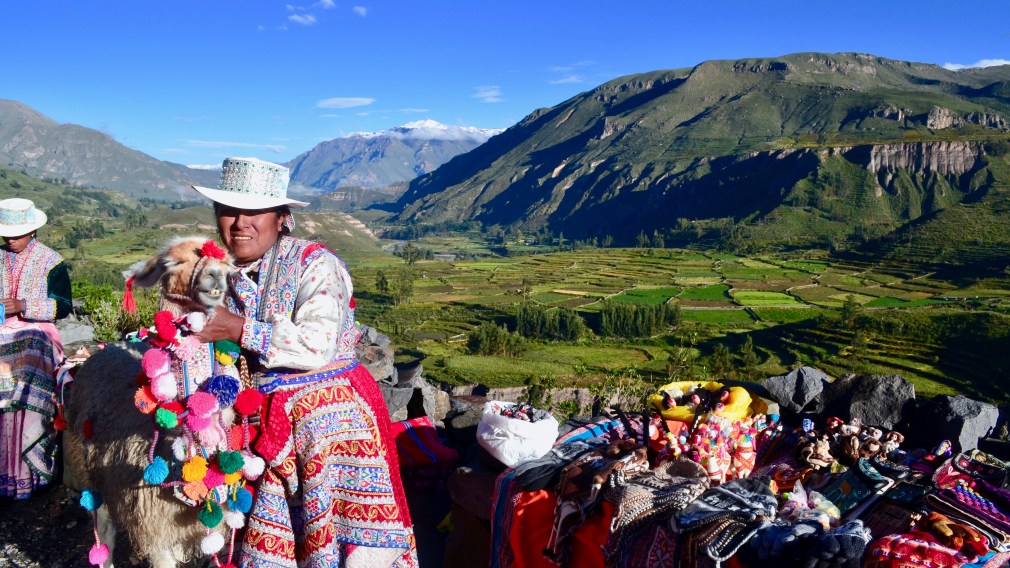 With the 2019 Pan American Games set to take place in Lima, let’s explore the famous locations, foods and traditions the popular South American destination has to offer.

So scroll on down and see Team Canada’s official Peru travel guide for all you adventure seekers with a case of the travel bug! 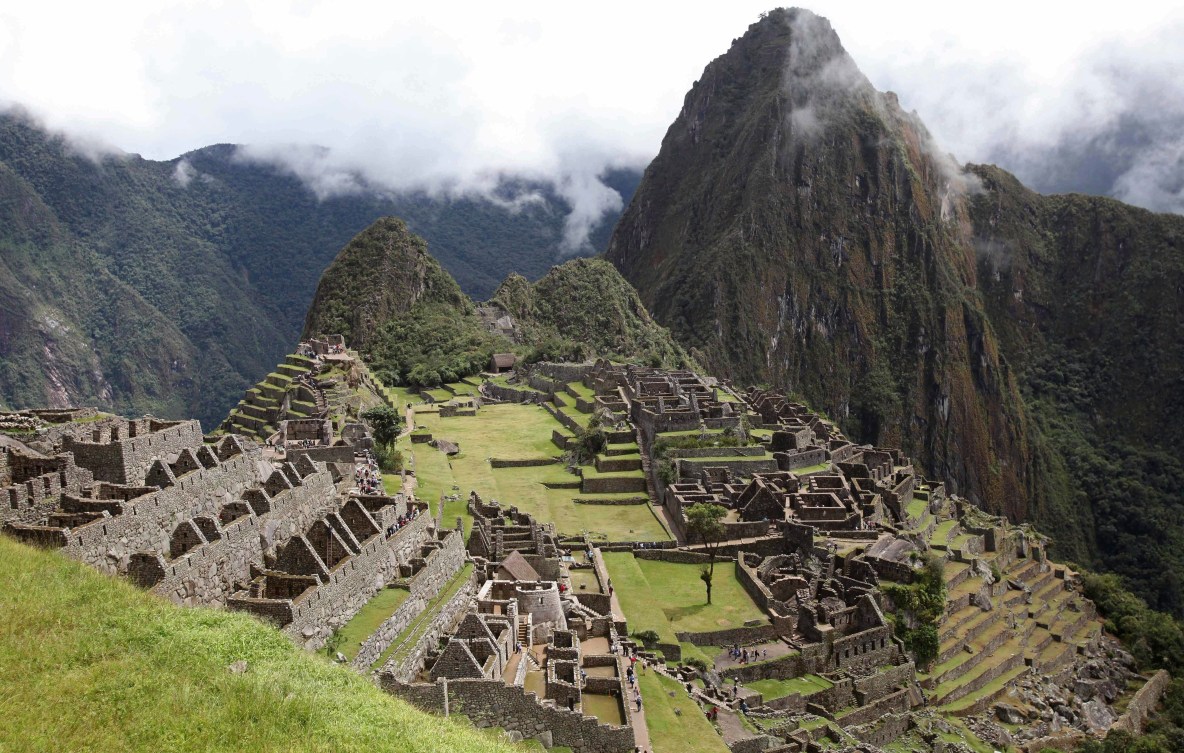 The citadel of Machu Picchu during its reopening in Cuzco on April 1, 2010. Photo Credit: AP Photo/Karel Navarro

If you have done any sort of search for Peru on Google, Machu Picchu will be the top recommendation on any travel-blogger journal or website.

It is an ancient Incan city, approximately 2400 metres above sea level concealed within the mountains of Cusco. It is one of Seven Wonders of the World that features breathtaking city remains and beautiful dry stone walls.

Regardless of the increase in tourism, this UNESCO World Heritage site only allows a certain number of visitors to enter the remains each day. So make sure you book your tickets ahead of time!

There are two ways to reach Machu Picchu, by foot or by transportation. If you’ve trained, we would highly recommend taking the Inca Trail, which is a four-day hike. This is the most scenic route and you may even meet some locals (llamas) along the way. 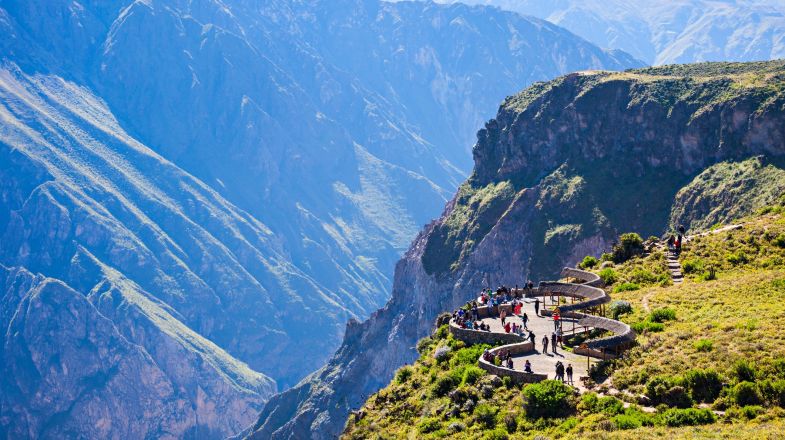 A group of tourists enjoying the view at Colca Canyon in Peru. Photo credit: bookmundi

But luckily for you, the Calera hot springs are located halfway along the hike. Placed in at a scenic spot by the Colca River you can let your legs relax and take a second to soak up the view.

In this area, there is also a 600 metre zip line that stretches across the canyon to help quench the thirst of any true adventure junky.

Photo of the Rainbow Mountains in Peru on a sunny day. Photo credit: Intur Peru

Who would have known eroding rocks and minerals would be so beautiful?

A few years ago, the Rainbow Mountains were discovered by some tourists (who were probably very lost) within the Vinicunca mountains and have since become a popular attraction.

This stunning view definitely has to be earned, though. With altitude of 5200 metres, this hike is not for the beginner. It’s higher than any peak in the Alps and just as high as Everest Base Camp! 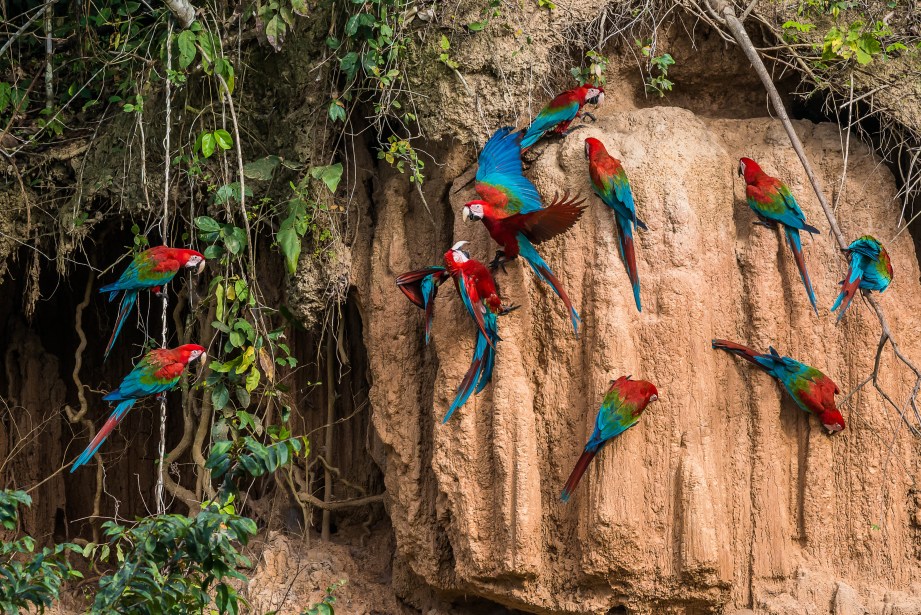 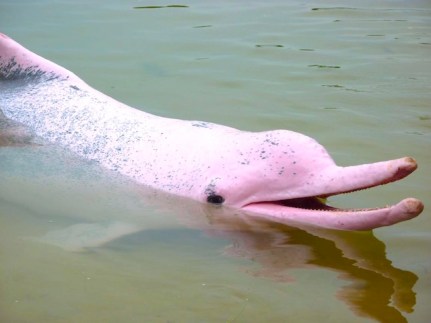 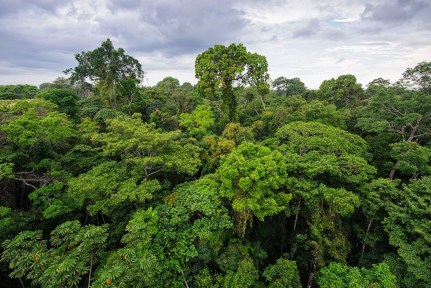 Monkeys, parrots and sloths, oh my!

The Peruvian Amazon is one of the most biologically diverse regions on Earth and covers over 60 percent of the country, making it a destination for travellers and Planet Earth binge-watchers alike, even though it is very remote and challenging to reach.

The highland jungle expands into the foothills of the Andes while in the lowlands you are completely immersed into the jungle and its habitat.

The easiest way to tour the Amazon is through a boat tour, giving you the chance to see rarely sighted animals like the Amazonian pink dolphin. And who doesn’t love dolphins, especially pink ones! 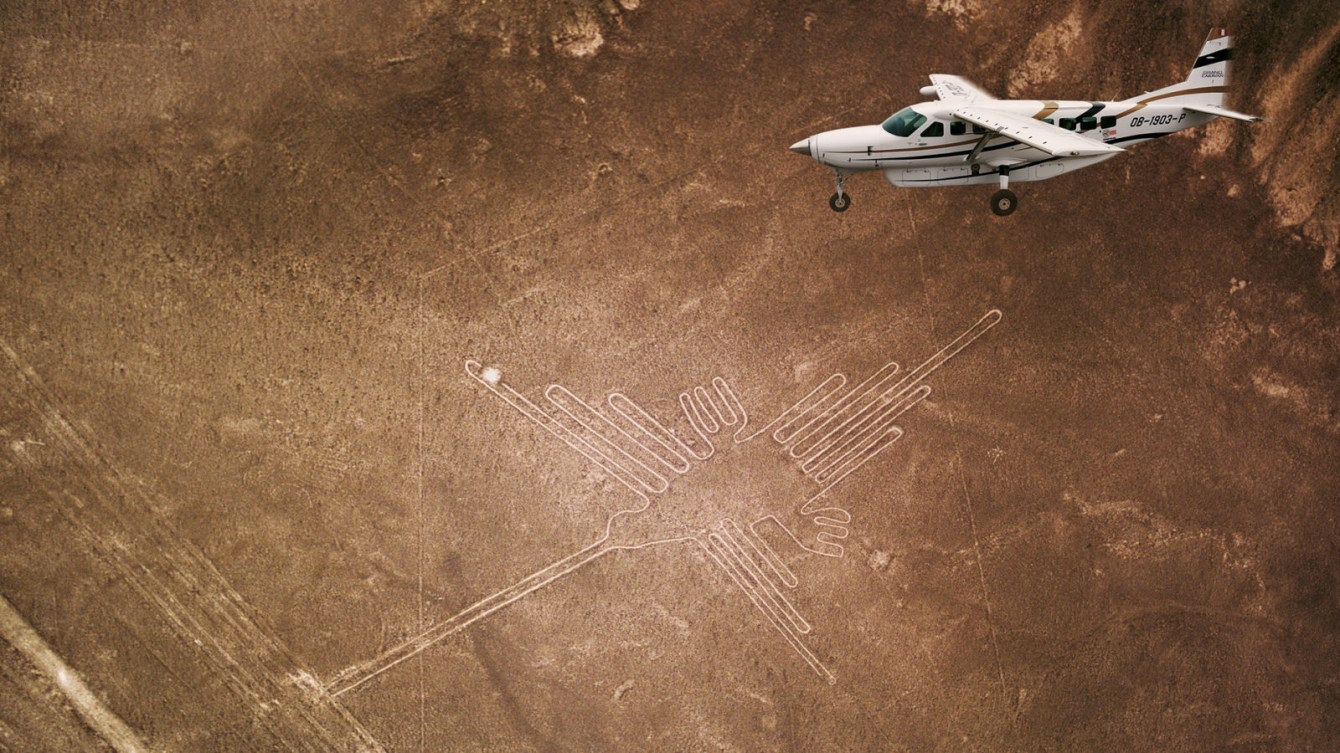 An aerial view of the Nazca Lines. The best way to view the scale of the lines are from above on a scenic flight. Photo credit: And beyond

Have you ever looked up at the clouds and seen that they reminded you of something? Well in Peru it is the exact opposite.

The Nazca lines are engraved markings into the rocks to form shapes of animals, plants, flowers and other objects. The lines stretch as long as 10km and can only be seen from the air.

Located just south of Lima, the lines went undiscovered until planes flew over the area in 1920s.

This is why the origin of the lines is still very controversial. Rumours range from cultures of the Paracas and Nazca tribes to extraterrestrial aliens. Either way, something worth checking out! 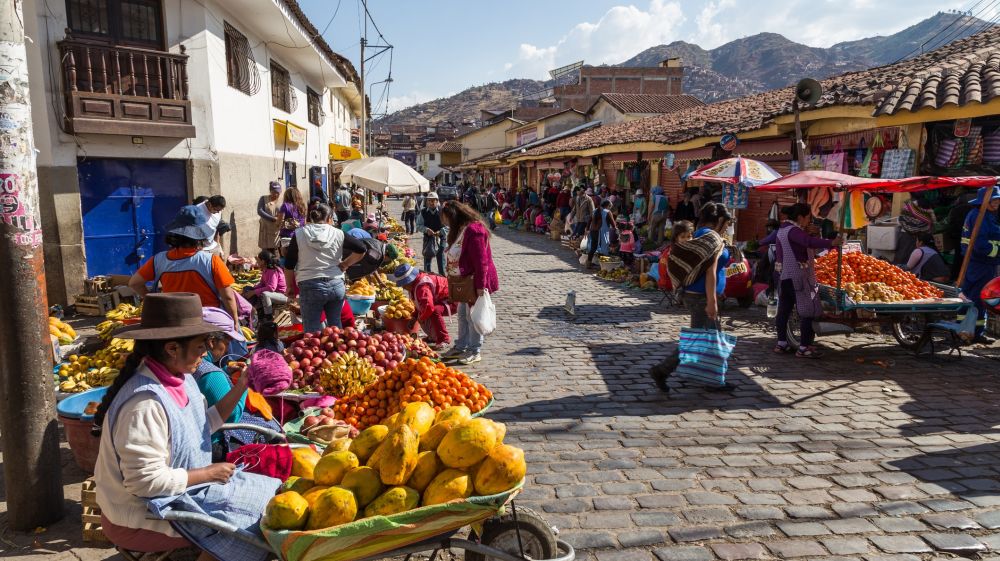 A busy street featuring many locals in the city of Cusco. Photo credit: bookmundi

Cusco, also a UNESCO World Heritage site, is a city in Peru near the Urubamba Valley of the Andes mountains and is the capital of the Inca Empire.

Some describe it as having a romantic vibe with a European feel, making it the perfect place to explore Inca ruins and enjoy the warm weather.

When you say C-U-S-C-O in your head does it remind you of a certain Disney character?

Maybe if we spell it differently it might ring a bell?!

Kuzco was the Incan emperor who transformed into a llama after drinking the wrong poison in the Disney film “The Emperor’s New Groove”. So keep an eye out, you never know what llama is next to take the throne. 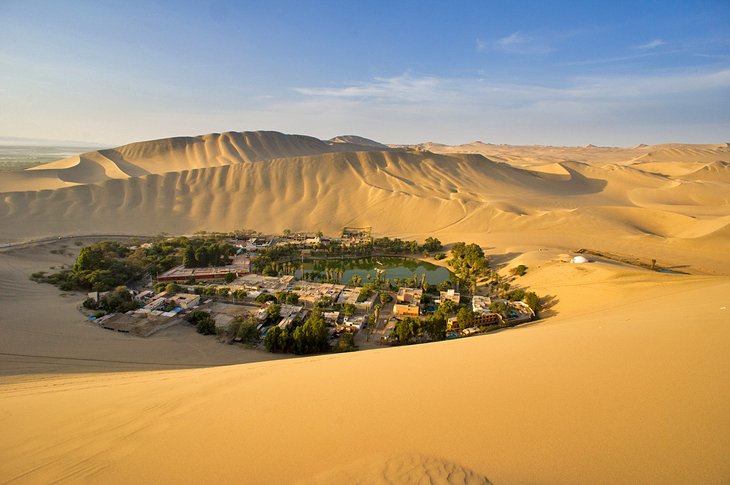 Ica and the Sand Dunes at Huacachina. Photo Credit: Plantware

Just three hours south of Lima is a small desert town surrounded by sand dunes that can reach 1000 metres in height called Huacachina.

This trek is for the more experienced of hikers, so bring lots of water. But it is once-in-a-lifetime experience that is worth every step.

The scenery is also known for its ‘Gram’-worthy shots, especially at sunset (just trying to help boost the likes). 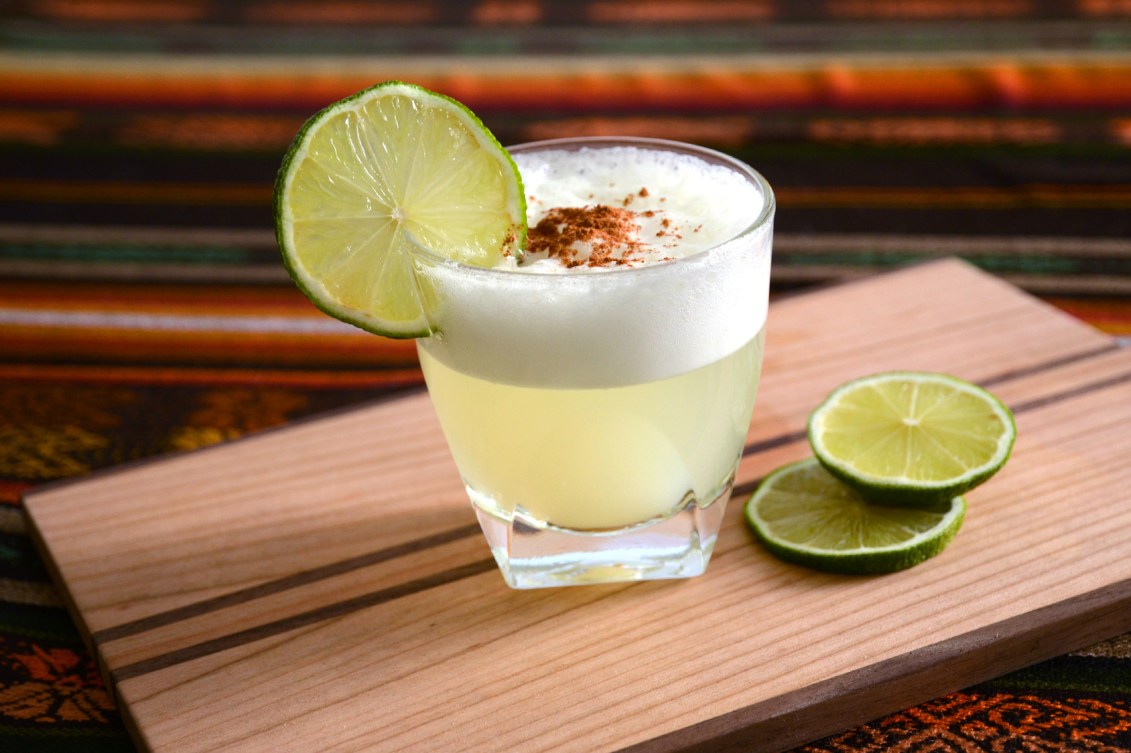 A photo of a pisco sour in Peru, garnished with a lime. Photo Credit: professorcocktail

You walk up to the bar and the bartender says ‘pick your poison’. In Peru, your drink of choice should be a pisco sour.

This concoction is made of the Peruvian brandy called Pisco which is shaken with sugar and freshly pressed lime juice and topped with egg whites.

Ica, a Peruvian town located five hours from Lima, is known for its pisco tasting tours. But be careful when ‘taste testing’ as the increase in altitude magnifies the effects of alcohol. So less is certainly more! 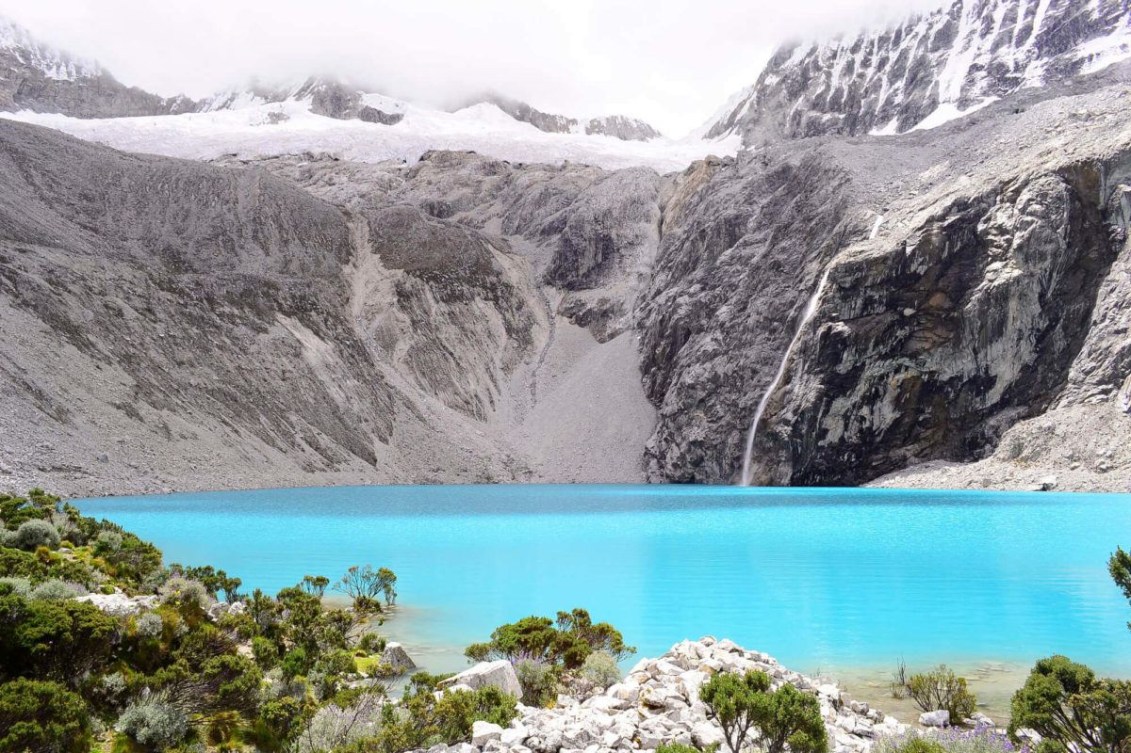 A photo of Lake 69, a small lake near of the city of Huaraz, in the region of Áncash, Peru. Photo credit: Practical Wanderlust

Last but not least is Lake 69, located near the city of Huaraz.

This lake is the Peruvian equivalent to a Jasper or Lake Louise. Yet another UNESCO World Heritage site, this vivid aqua blue lake has stunning glacials and and snowy mountains.

It is challenging to reach with the easiest route being a 75-minute flight from Lima. But as you can see, it is worth every bit of it.

To avoid the cold, the best time to visit Huaraz and Lake 69 is between May and September. Perfect timing with Pan Am competition starting in July!