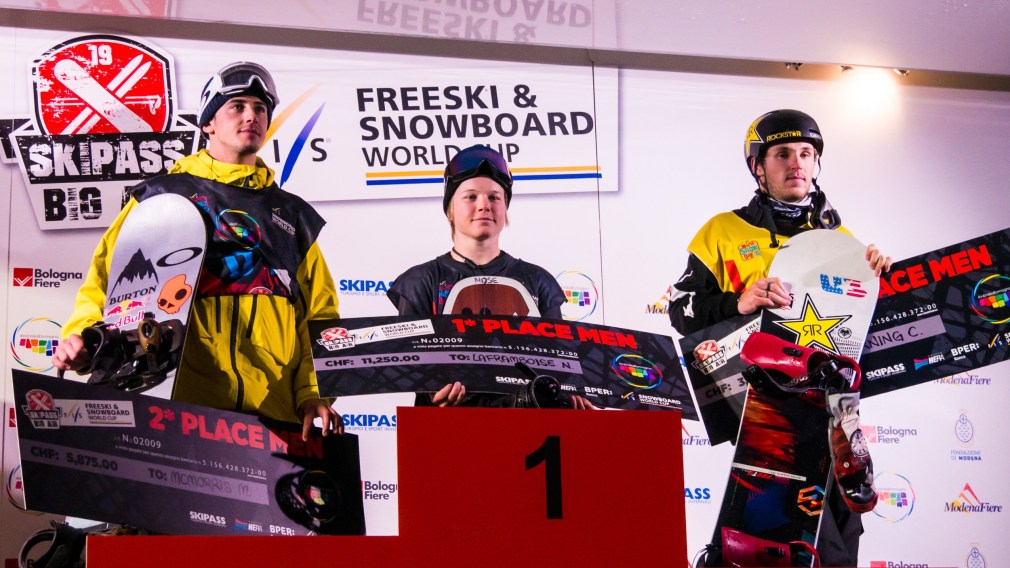 Team Canada caught some big air on the slopes in Modena, Italy during the Snowboard World Cup, where Nicolas Laframboise won gold, and both, Mark McMorris and Brooke Voigt earned silver on Saturday evening.

Nicolas Laframboise jumped to his first-ever World Cup victory with a final score of 172.50 points. For his first run, the 19-year-old from Sainte-Agathe-des-Monts, QC received a score of 90.00. Laframboise’s second jump was awarded an 82.50, and the third jump was not scored.

He completed an outstanding frontside triple cork 1440 mute, followed by the backside version of the same trick. Laframboise’s finale included a frontside 360.

Alongside Laframboise on the podium was teammate  Mark McMorris. McMorris got off to a slow start as his first jump was not scored. However, he received an 86.75 on his second jump and then finished with an 81.25. His total of 168.00 points earned him the silver medal for a double podium finish alongside Laframboise. He also completed a backside triple 1440 indy and frontside triple 1440 mute on his final two runs. This is his eighth career World Cup podium. Chris Corning of Team USA won bronze with 166.25 points.

Nicolas Laframboise of @CanadaSnowboard announced himself to the world tonight at the @skipassmodena big air World Cup, claiming his first World Cup victory in style…

On the women’s side, Brooke Voigt secured the silver medal for Team Canada with 126.75 points. Throughout the competition, she completed a backside 720 and frontside 720 melon. Her first run earned her 50.50 points. On her second jump, the jump did not score. To finish off the competition, her final run gave her 76.25 points. In first place was Reira Iwabuchi of Japan (176.50), and in the bronze position was Anna Gasser of Austria (109.75).