World Juniors: Canada shuts down Finland to advance to the gold medal game

World Juniors: Canada shuts down Finland to advance to the gold medal game 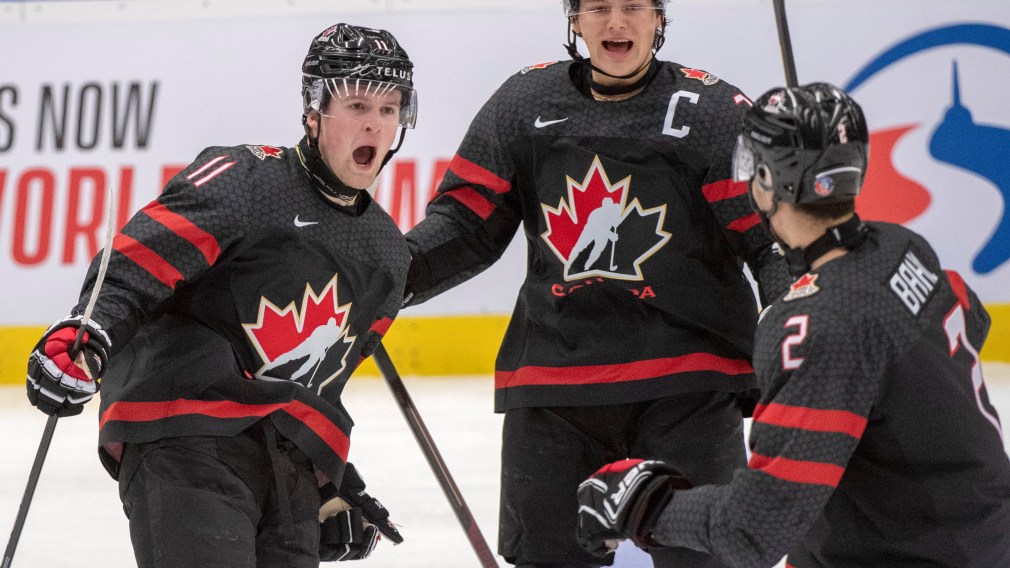 Canada opened with three goals in the first four minutes of the game. Connor McMichael found the back of the net at 1:48, followed by Alexis Lafreniere (3:05) and Jamie Drysdale (3:55).

Ty Dellandrea landed the fourth goal in the first period at 14:49. Fired up for the next period, Team Canada pushed to hold their lead, and Lafreniere managed to score his second of the game at 17:53 to increase their lead.

The World Junior finals will take place on Sunday. Canada will face Russia for the gold medal. This will be a rematch of the preliminary round where Russia handed Team Canada their only loss of the tournament (6-0).

In the first period, captain Barrett Hayton got Canada on the board with a goal from Alexis Lafrenière. This is Lafrenière’s first game back after missing the previous two games due to a knee injury.

READ: Top 10 moments at the World Juniors for Team Canada

There it is! Alexis Lafrenière, in his return from injury, finds the captain Barrett Hayton to get 🇨🇦 on the board first 👀 pic.twitter.com/wioLrYNBd9

Canada continued to add onto its lead in the second, with goals from Connor McMichael, Jacob Bernard-Docker, Liam Foudy, and Lafrenière.

Guess who's back? Alexis Lafrenière 👀👀👀 pic.twitter.com/yyCRhjFU0d

In the final frame, Hayton scored a power play goal early into the third, extending Canada’s lead. Six minutes and 10 seconds into the period, Oliver Okuliar got the Slovaks got onto the board.

How about another power-play goal for Barrett Hayton? 😱 second of the day for the captain pic.twitter.com/aoKkIJLfdo

Hayton was awarded Player of the Game.

Team Canada took to the ice for their fourth game of the 2020 IIHF World Juniors Championships with a healthy 7-2 victory over the Czech Republic.

Canada got off to a solid start on Tuesday afternoon against the host team, Czech Republic. Forward Joe Veleno opened the scoring for Canada, sinking a bouncing puck just 4 minutes and 41 seconds into the game. Nolan Foote made it 2-0 just before the 10 minute mark with a slap shot from the point for a second power play goal. Barrett Hayton made it 3-0 for Canada at 13:29 with the third power play goal of the game.

READ: Canada’s World Junior stars: Where are they now?

Continuing to increase the lead for Team Canada, Connor McMichael found a loose puck off a scramble and sent it to the back of the net for a 4-0 lead heading out of the first period. The Canadians tied a tournament record with four power play goals in a single period.

Halfway into the second period of play, brought an stressful minute for Canadian fans with four goals scored within 80 seconds, two goals apiece. Vojtech Strondala broke hopes of a Canadian shutout, putting up a point for the Czech Republic. 14 seconds later Libor Zabransky scored a second goal for the Czech Republic making it 4-2.

Team Canada’s Liam Foundy responded with a quick bounce back just ten seconds later to make it 5-2. Goal six for Canada came less than a minute later by Dylan Cozens for the fifth and final power play goal of the game. Team Canada ended the second period with a 6-2 lead over the Czech Republic.

The @HC_WJC train keeps rolling here in Ostrava. Jared McIsaac nabs his 1st of the tournament off a pass from @Dylan_Cozens and 🇨🇦 now leads 7-2 #WorldJuniors pic.twitter.com/GQUPsQpaNT

Halfway into the third, Canada’s Jared McIsaac navigated his way through traffic to increase the Canadian lead to 7-2 and capture his first goal of the tournament.

With this win, Team Canada finishes at the top of Group B standings. They’ll face Slovakia in one quarter-finals in Ostrava. As for the Czechs, they finish in fourth place and will face top-seed Sweden from Group A.

Rising star Alexis Lafreniere remains out with a knee injury.

Team Canada hit the ice at the 2020 IIHF World Juniors on Monday, where they bounced back from their Saturday loss to Russia with a 4-1 victory over Team Germany.

Nolan Foote opened the scoring for Canada, after capitalizing on a rebound from Kevin Bahl to score his second goal of the tournament.

Team Canada carried this momentum into the second period, where they put up two more goals thanks to Liam Foudy and Calen Addison. While two German defenders got caught up with Ty Dellandrea, he was able to pass the puck to Foudy, who sniped a perfect, uncontested shot past German netminder Hendrik Kane to up Canada’s lead.

Just a couple of minutes later, Addison scored on a 5-on-3 powerplay to secure a dominant 3-0 lead for the team.

With less than two minutes to go in the third, Canada took two costly penalties, allowing Germany’s Yannik Valenti to cut into their lead by 1. Following their goal, they pulled Kane from the net in hopes of catching up, but Canada’s Ty Dellandrea scored his second empty-netter of the tournament to finish off the game at 4-1.

Joel Hofer made his goaltending debut for the Canadians, where he recorded 22 saves in their victory.

This win has moved Team Canada back to the top of the Group B standings ahead of their final round robin game tomorrow. They’ll be taking on tournament-host Czech Republic in New Years Eve showdown at 1:00 PM ET.

Rising star Alexis Lafreniere remains out with a knee injury.

Canadians around the country felt sorrow as Team Canada suffered a tough loss to Russia in their second game of the World Junior championships in Ostrava, Czech Republic on Saturday.

2⃣ great chances but no 🎲 for @hc_wjc on this play.

Russia opened up the scoring early in the game with a goal from Alexander Khovanov just 1 minute and 44 seconds into first period play. The Russians continued with two more goals in the first period from Pavel Dorofeyev and Nikita Rtishev.

With the Canadians trailing 3-0 heading into the second period, forward Alexis Lafreniere needed to be helped off the ice after an apparent knee injury. The arena was dead silent as he was attended to by teammates and training staff. The potential No. 1 pick in next summer’s 2020 NHL draft, Lafreniere looked in significant pain after catching his leg in the pads of Russian goaltender Amir Miftakhov and did not return to play.

Alexis Lafrenière goes down after a scary collision with the Russian goaltender. pic.twitter.com/S5hLEHdk9P

A minute after play resumed, Nikita Alexandrov of Russia made it 4-0 with a close-in deke. Team Canada replaced goaltender Nico Daws, with Joel Hofer. Russia put back two more goals with a tip in from Yegor Sokolov and a shot from the slot from Grigori Denisenko.

After the second period, Russia sat 6-0. No goals were scored in the final period.

Next up, Canada will take on Germany on Monday, December 30 at 9 am ET.

Team Canada kicked off their 2020 IIHF World Juniors campaign with a win over rival USA on the first day of the tournament in Ostrava, Czech Republic. It didn’t come easy, but the Canadians were able to top the Americans 6-4 in a wild Boxing Day match up.

Alexis Lafreniere, the NHL’s projected No. 1 pick at the 2020 Draft, had a huge game for Canada, scoring one goal and three assists – including the game winner.

The game started off slow for the Canadians, who trailed 2-0 in the first period after the US’ Shane Pinto and Arthur Kaliyev scored a pair of goals on the power play. Despite not meeting the back of the net, Canada wasn’t ready to let that shake them.

🚨 That celly tho. 🚨@con91mcmichael gets @hockeycanada on the board! #WorldJuniors pic.twitter.com/zHHpdvwWTY

In the second period, the Canadian squad came out ready to play and put up three unanswered goals.

Canada’s first goal of the tournament came from Connor McMichael on a centering pass from Akil Thomas to make the game 1-2.

Captain Barrett Hayton scored next, slapping one past US goaltender Spencer Knight on the power play to tie the game. Shortly after, the game was turned in Canada’s favour by Nolan Foote who also scored on the power play to give them a 3-2 advantage heading into the third.

In the final period, things got a little tricky.

While Canada took an early 4-2 lead with another goal from Hayton, the US was quick to respond this time. Nick Roberston scored his first of the tournament to edge the American’s a little closer. Then, Shane Pinto scored his second power play goal of the night to even out the game.

Suddenly, Canada’s lead was in jeopardy.

However, just seven seconds after Pinto’s goal, Lafreniere buried one in the net to restore Canada’s lead again with just minutes left in the game.

ALEXIS. LAFRENIERE. What else is there to say?! pic.twitter.com/tVyObK4fZw

Ty Dellandrea sealed the win with an empty-netter. This marks Canada’s first victory over the USA since the 2015 World Juniors.