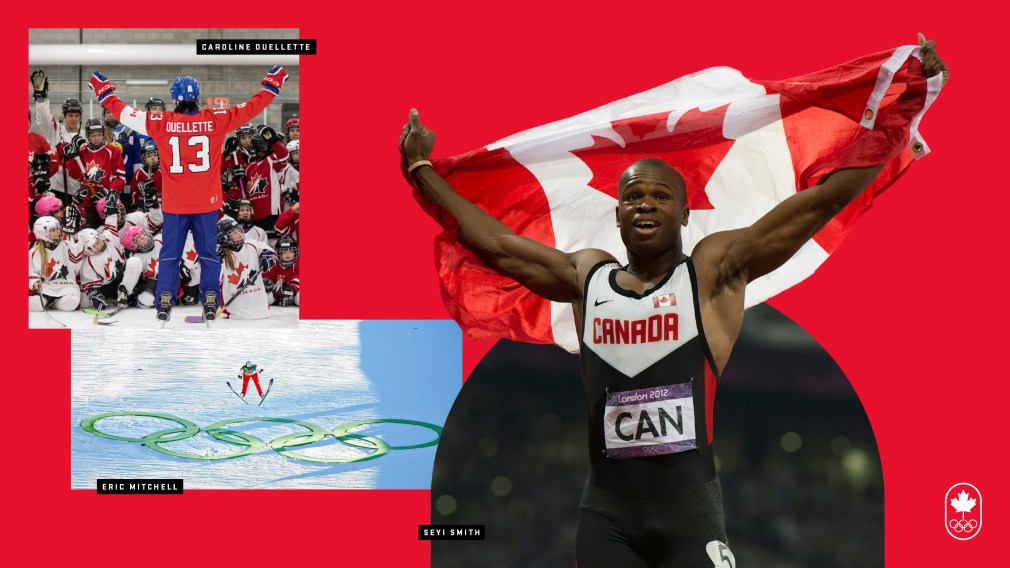 Olympic legacies don’t stop after the closing ceremony of a Games.

For many Olympians, passing on what they have learned throughout their careers to others is what drives them to better the world we all live in — by living true to the values of Olympism which are Excellence, Friendship and Respect.

It’s hard not to be overwhelmed with enthusiasm as you listen to Caroline Ouellette talk about her Celebration of Women’s Hockey project (COWH), an annual tournament for young female hockey players aged five to 12.

The four-time Olympic gold medallist started the event in 2014 in response to declining hockey registrations, particularly among young girls in Quebec — where a lack of feminine role models in hockey and the media was identified.

Ouellette believed the solution lied in these same girls – the next generation of elite athletes. What followed was the creation of a tournament made exclusively for them; one that helps build the passion for hockey and inspires the girls to hang on to sport when they become teenagers.

Another major pillar of the Celebration is the creation of community: connecting young players with one another, in addition to some of the best athletes in the world.

“I would love it so much if these young girls could live the Olympic Games.” 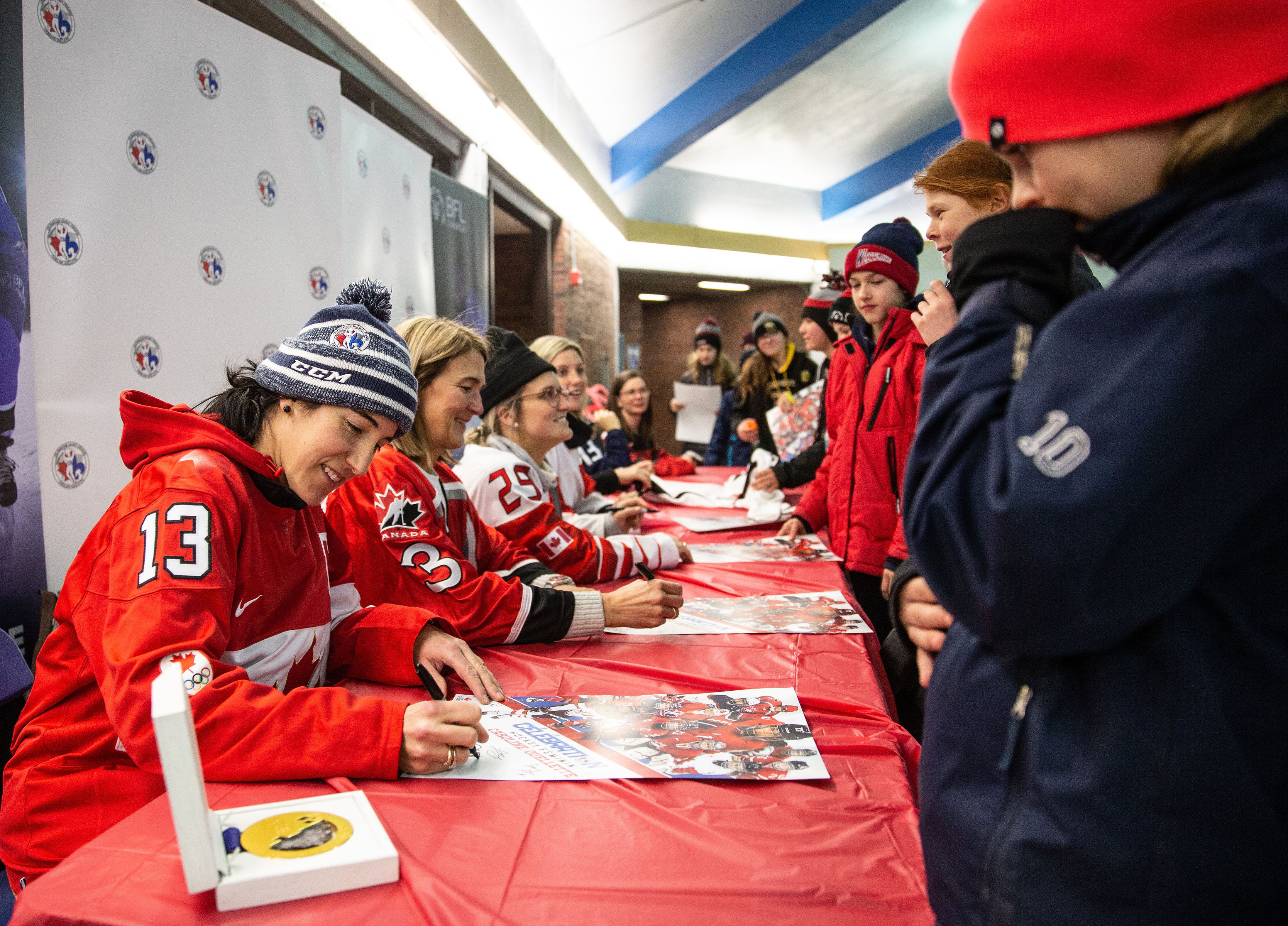 The mother of two girls (already loves mini-hockey) has hosted former Team Canada teammates like, Marie-Philip Poulin and Mélodie Daoust at the tournament. These amazing models of success in both sports and academics prove to the next gen that it’s possible for a women’s hockey player to reach her Olympic dream.

“I firmly believe that for a young girl, if she doesn’t see any women succeeding in hockey, transcending themselves, making their country proud, she won’t see herself doing that,” says Ouellette.

In addition to inspiring a whole generation to devote themselves to hockey, to ask for better conditions, to aim for success, and to knock down doors (or glass ceilings), the Concordia Stingers coach has also got things moving at an international level.

A few years ago, Oullette managed to register the first female team for the Quebec International Pee-Wee Hockey Tournament in Quebec City. Now, each year, through COWH, Ouellette can build an All-Star team that will take part in the Quebec tournament as the only female entry.

This giant step, on top of all the other efforts she put into her project, has a direct impact on young hockey players.

“That generation believes it, wants it. They hope to play professional hockey one day.”

That hope is what motivates Ouellette to continue doing what she does for her sport; to continue fighting and help tomorrow’s best athletes achieve their Olympic dream.

A new flame was lit with the creation of ski jumper Eric Mitchell’s program, Pass the Torch. It gives young athletes the opportunity to share experiences and stories, while being leaders in their communities.

After his return from the Vancouver 2010 Olympic Games, the then 17-year-old, had the opportunity to speak about his Olympic experience to his elementary, middle and high school.

Mitchell realized how powerful his words were to others and wanted to give young athletes the same opportunity.

“It just seemed like there was a bridge missing for these young athletes to take what they had learned at the Games and share them with their clubs, schools, and communities once they got back home to Canada,” says Mitchell.

As an ambassador for COC’s One Team initiative and a Young Change Maker for Team Canada at the Youth Olympic Games, Mitchell knew what it meant to mentor young athletes to be leaders and help share their stories. After he received funding from the inaugural OLY Canada Legacy Grant in 2019, his program came to life.

“Often when you’re trying to reach young people, it’s easier for them to go out and reach others through their means, rather than going from the top to design a strategy.” 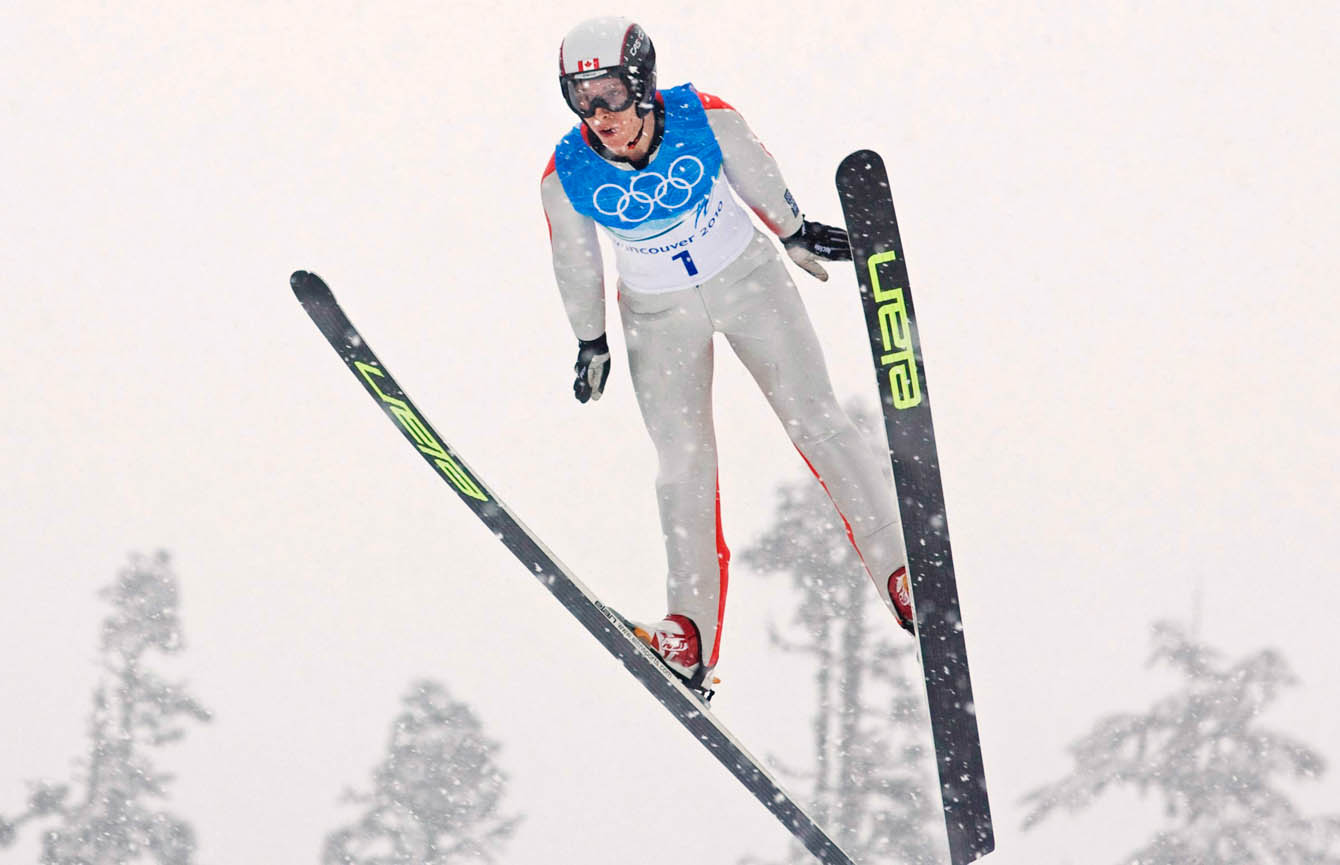 “Pass the Torch has been able to give Youth Olympic athletes the chance to share their stories, experiences, and lessons they have learned and give them the platform,” says Mitchell.

With the project underway, his goal is to support younger generations of athletes by showing them the value of Olympism and inspiring others.

Giving young athletes that platform to share their first-hand experiences with their peers is so powerful, says Mitchell.

“It resonates much stronger when it comes from somebody who’s just living that same experience as you are.”

Mitchell wants to give young athletes the courage and confidence to be their authentic selves. He reflects on how he was not only competing at the highest stage possible, but also being comfortable and confident as a gay person.

“Once I was able to step into my own shoes and showcase who I was as a person, I felt the confidence to go out and do what is right.”

The confidence he gained over his career and the support he received from the Canadian Olympic Committee is what helped him succeed both on and off the field of play, says Mitchell.

As Pass the Torch continues to grow, Mitchell hopes that his initiative reaches more young athletes to help share their stories from around the world.

Combining two passions, athletics and sustainability, is where dual Olympian Seyi Smith feels most at home.

The grassroots project, slated to launch in the summer of 2021, was created with three goals in mind:

Smith says having a greener future, especially in the world of sports, is everyone’s responsibility. He views projects like his as just the beginning.

“It’s good to have well known athletes elicit change. But, having projects like this, makes it easier for change to happen.”

Education on sustainability is what Smith hopes to bring to all Canadians. For example, the simple installation of water fountains is just one way to show and encourage people of the benefits of bringing their own water bottles.

Smith also wants to encourage meet directors to be aware of how their events can be eco-friendlier and advise them on what they can do to contribute to a greener future.

“At international competition there is a body that looks at sustainability, but at a [younger]age group/high school level there isn’t that committee to oversee sustainability,” says Smith. “So, it’s important to have something in place to take sustainability into consideration.”

Smith has also planned ways for kids to be more involved, he’s designed, scavenger hunts that teach more about sustainability, while having fun along the way.

Smith hopes to see the project extend beyond athletics and into more sports, as he aims to make an athletic environment eco-friendlier.

In 2019 the Canadian Olympic Committee (COC) gave the inaugural OLY Canada Legacy Grant to Olympians who are retired from Olympic participation as athletes. It allows athletes to take on a project that links their love for sport and passion for their communities. The $5,000 grant is given to Olympians to help build a stronger community through the values of Olympism.