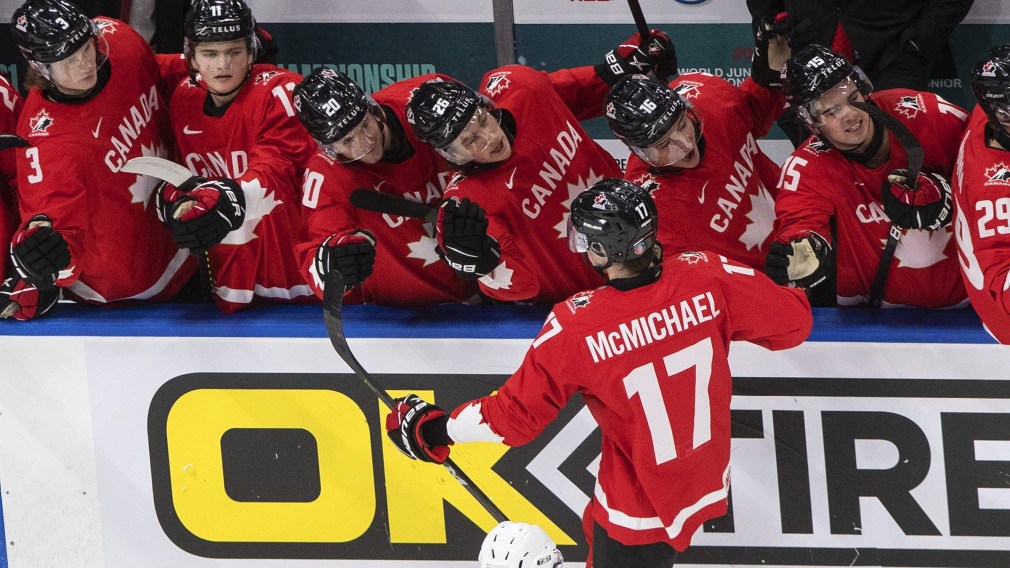 Team Canada defeated Russia 5-0 Monday night to advance to the final of the 2021 IIHF World Junior Championships in Edmonton, Alberta.

Canada repped the heritage red as the home team in the 43rd clash between the two giants of the game. Now only one win away from gold, Canada will have one night to rest before returning to Rogers Place in Edmonton for the final puck drop.

Canada developed many opportunities early in the first. A horn sound at 1:28 stopped play, allowing for officials to review a Canadian shot at 0:59 by Alex Newhook of St. John’s, Newfoundland. After review it became clear that Newhook made his return to the lineup with a meaningful impact giving Canada a 1-0 lead with a top shelf snipe. A game off due to injury gave him time to recharge and he came out ready to play. The clock was reset to 0:59 before play resumed.

Connor McMichael got under the Russian defence-man to put the puck in the back of the net for his fourth goal of the tournament. Two goals in the first 10 and a half minutes gave Canada momentum towards a great upset.

The penalty box got the best of Russia, who received four minutes for high-sticking. Team Canada took advantage of the power play, increasing the lead to 3-0. Cole Perfetti put the puck under the glove and over the pad for his second goal of the tournament.

At this point, Canada had total control of the game, winning a notable amount of one-on-one puck battles, leaving Russia chasing. At the end of the first 20 minutes of play, shots were 16-7 in favour of Canada. Devon Levi made many stops, freezing the puck to shut down every Russian opportunity.

Askarov loses his stick and Braden Schneider capitalizes to give @HC_WJC their 4th goal of the game. #WorldJuniors pic.twitter.com/2zCnnQbJgU

Russian goaltender Yaroslav Askarov lost his stick and Braden Schneider stepped in and whipped a wrist shot past the glove for his first of the tournament, to make it 4-0 only four minutes and nine seconds into the second.

Canada went back on the power play with a 4-0 lead. Russia drew two minutes for holding an opponent (28:13). At the halfway point, Canada had only given up eight shots to Russia. With 3:26 to go in the second, Canada was penalized with a two minute tripping call.

Russia took advantage of the power play with what they believed was their first goal of the game. The goal was quickly challenged due to a potential offside call. The puck hit Justin Barron on the way into the net, who had fallen in front of Levi. Each team was with a power play goal, until the play review was confirmed offside and the scoreboard reverted to 4-0. McMichael was sent back to the box to finish his time. A little bit of life given to the Russians, was now taken back.

Dylan Cozens DENIED by the skate of Azkarov on the penalty shot 🙅‍♂️ #WorldJuniors pic.twitter.com/Ash7pQwaZX

Cozens gained a breakaway, pushing through a Russian hook. He received a penalty shot but could not convert (39:30). A very dramatic second period came to a close for a 4-0 lead heading into the second intermission.

With just under five minutes remaining in the final period of play, Canada’s Peyton Krebs and Russia’s Zakhar Bardakov both received two minutes for roughing. Russia pulled their goalie (57:06) and the workhorse from Whitehorse did it again. Dylan Cozens got on the scoreboard with an empty netter for his eighth goal of the tournament. He leads the tournament in scoring.

GAME OVER! 27 saves for @DevonLevi33 in another shutout performance, and 🇨🇦 will defend its gold medal on Tuesday night.

A stellar performance by Levi behind a strong Canadian team shut down the Russians on every turn. He has been very reliable since day one, mostly in the team’s 3-0 win over the Czechs in the quarterfinals. He has allowed just three goals in nearly six full games, with three shutouts.