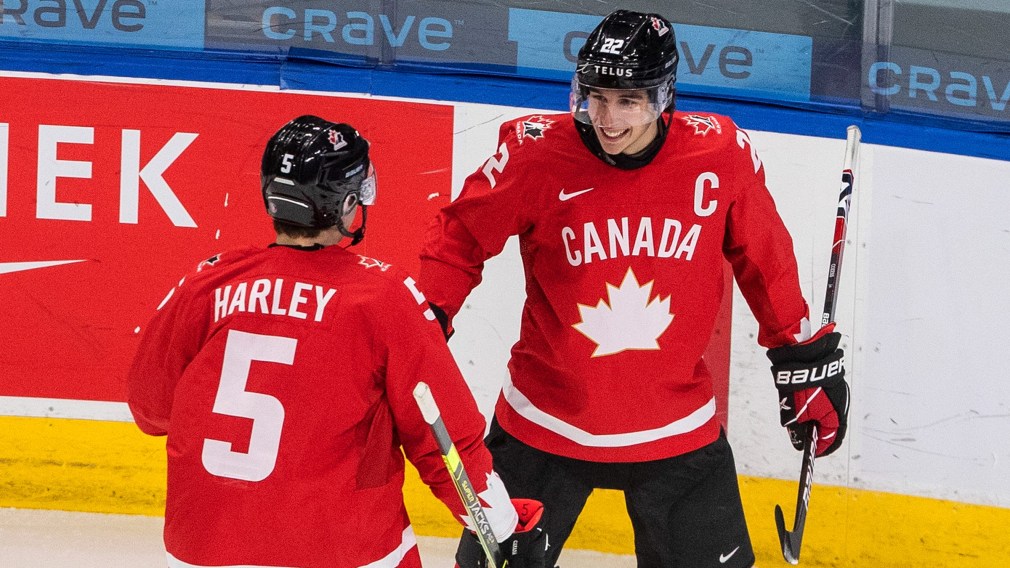 The Canadians returned to Rogers Place in Edmonton, Alberta after their 10-0 shutout win over Switzerland on Tuesday to put an end to Finland’s three game winning streak.

Canada remains the only undefeated team in the tournament, finishing the preliminary round first in Group A. A dominant Canadian performance was led by Captain Dylan Cozens, who scored the first and last goals of the game.

Dylan Cozens scores his fifth goal of the tournament! pic.twitter.com/p7yKMbJXyC

Canada set the tone early on in the first period. Cozens fired the puck to the back of the net just 3 minutes and 49 seconds into the first to earn his fifth goal of the tournament. Finland drew two penalties in the first, sending Canada into their first and second power-play. The intense first period finished with a Canadian 1-0 advantage, with Canada leading shots on goal 17-1 heading into intermission.

After his first shift in the second period, Alex Newhook left the ice for the dressing room due to a rough upper body injury in the first and did not return for the remainder of the game. Early in the second, Finland sent Canada into their third power play of the game. With three shots on net, the Canadians were unable to sink the puck.

After putting lots of pressure on the Finnish defence, Canada got a well deserved second goal. Jakob Pelletier’s shot from the slot deflected off Dylan Holloway and snuck between the legs of Finland’s goaltender, Kari Piiroinen. Holloway was credited with the second goal of the game.

There was fantastic forechecking by Team Canada as they smothered Finland deep in their end leading to a score of 3-0 for the Canadians. Byram Bowen walked the line to take a shot on goal from the point. Peyton Krebs got ahold of the loose puck putting it between his own legs and into the net for a well deserved goal.

Team Canada wrapped up two periods of play with a 3-0 advantage, leading shots on goal 35-7.

Finland received their first power play in the third, resulting in a quick goal by Finland’s Brad Lambert who converted on the power play to break Devon Levi’s shutout streak of 106:29 with a top shelf goal.

After Canada gave up a power play goal, they had a chance to regroup after Finland’s Roni Hirvonen pulled their fifth penalty of the game for roughing.

Dylan Cozens had to work HARD for this empty-netter 👀 pic.twitter.com/fOJFDjrxk5

Finland pulled their goalie, allowing for Cozens to out-power the Finland’s defence and get a well deserved open net goal for his sixth of the tournament. Levi made 18 saves for Canada.

Previously in 2020, on the way to their 18th World Junior gold medal, Team Canada and Finland met in the semi-finals on January 4th, 2020 ending in a 5-0 win for the Canadians.

With this win, Team Canada finishes first in Group A. Next up, Team Canada will face the Czech Republic in the quarter finals on Saturday January 2, 2021. They’ll be seeking their fifth consecutive win at the tournament on their way to defend their 2020 World Juniors title.

Team Canada’s dominance continued on Tuesday night (December 29, 2020). The Canadian squad shut out Switzerland 10-0 to earn their third consecutive win at the tournament.

Phil Tomasino got things started for Canada early on, reaching the back of the net less than two minutes into the game to give Canada a 1-0 lead – scoring the lone goal in the first period. The Mississauga native has had an impressive showing at the tournament so far, registering four goals and two assists in Canada’s three games.

A costly penalty early in the second by Switzerland’s Lorenzo Canonica allowed Canada’s Dylan Cozens to capitalize on the power play to extend Canada’s lead by one. A few minutes later, Jakob Pelletier cleaned up a rebound off the boards from teammate Connor Zary to make the game 3-0. Ryan Suzuki found the back of the net midway through the period to give Canada a 4-0 advantage, followed by a goal from Connor McMichael before intermission to give Canada a 5-0 edge after 40 minutes.

In the third, Quinton Byfield scored his first-ever World Juniors goal to up Canada’s lead by one. Three minutes later, he followed his goal up with another one to bring the game to 7-0. Byfield, the NHL’s second overall draft pick this year, also registered four assists in Canada’s big win for six-point night.

🚨🇨🇦 @byfield55 nets back-to-back goals and nets his second of the game! Puts him up to 5 points this game! #WorldJuniors pic.twitter.com/KL4bJd68wz

A minute after Byfield’s goal, Peyton Krebs found Cole Perfetti who wired it past Swiss goaltender Noah Patenaude. Kaiden Guhle earned Canada’s ninth goal, sniping a one-timer off the crossbar. With less than five minutes to go, Pelletier scored his second goal of the night to bring the game to double digits.

Canadian goaltender Devon Levi made 15 saves in their 10-0 victory.

Next up, Canada will take on Finland in a New Year’s Eve showdown at 6 pm ET for their final game of the preliminary round. Currently, Canada leads the Group A standings.

Team Canada returned to Rogers Place in Edmonton after their 16-2 win over Germany to defeat Slovakia 3-1 on Sunday, (December 27, 2020) during the IIHF 2021 World Junior Championships.

For his first World Juniors appearance, Prince Edward Island’s, Jordan Spence, buried a rebound to put Canada on the board at 4:08 seconds for a 1-0 lead. Assists went to Philip Tomasino and Dawson Mercer.

A scoreless second period left Canada and Slovakia with turnovers as they tried to gain possession, earning a total of 16 to eight shots on goal, respectively.

The end of the third saw the most action as Tomasino found the opening on a one on one to double Team Canada’s lead (16:25).

At 18:36, Slovakia’s Martin Chromiak got past Devon Levi of Quebec to split Canada’s lead in half. Although, Ontario’s Jack Quinn added an unassisted, empty-net goal for a 3-1 final.

On the way to their 18th World Junior gold medal at the 2020 tournament, Team Canada and Slovakia met during last year’s quarterfinals where Canada saw a 6-1 win.

Next up, Team Canada will continue preliminary play and face Switzerland on Tuesday at 5:30 pm ET. They’ll be looking for another win on their quest to defend their 2020 World Juniors title.

Canada set the tone early on, scoring four goals in the first period. Alberta native Kaiden Guhle opened the scoring, putting Canada on the board less than two minutes into the first.

🚨🇨🇦Less than 2 minutes into the first @HC_WJC is one the board! A great shift give Kaiden Guhle a perfect opportunity to put Canada on the board. #WorldJuniors@CanadiensMTL pic.twitter.com/nMFKVVJdRF

A few minutes later, Dawson Mercer extended the lead with a shorthanded, wraparound goal to make the game 2-0.

Germany responded on the power play halfway through the first to score  of the night courtesy of John-Jason Peterka. However, Mississauga native Philip Tomasino answered right back to restore Canada’s two goal advantage, followed by a buzzer beater from Peyton Krebs with 0.2 seconds left on the clock to make it 4-1 before intermission.

Canada has just scored their 3rd goal on their 5th shot 😳 pic.twitter.com/YjH5PBrbd6

Canada continued their dominance in the second period, scoring seven unanswered goals against the Germans. Mercer, Krebs and Tomasino continued their scoring streak, each sniping their second goals of the night. Alex Newhook also scored twice, while Dylan Cozens and Ryan Suzuki each scored their first goal of the tournament to give Canada an 11-1 advantage after 40 minutes.

RELATED: Top 10 moments at the World Juniors for Team Canada

Their seven goals tied Canada’s all-time goal-scoring record which was set on January 2, 1999 against Kazakhstan.

🎩🎩🎩 HATTY!!!!!!! @Dylan_Cozens nets his 3rd goal of the game and picks up the tournament's first hat trick of the year! @HC_WJC @BuffaloSabres #WorldJuniors pic.twitter.com/h8YO5PQ4Ry

Jakob Pelletier, Thomas Harley and Connor McMichael followed Cozens’ lead, adding three goals in the final period to secure Canada’s 16-point victory. Before the game was up, Germany’s Florian Elias capitalized on the power play to make it a 16-2 final.

The champions are back! @HC_WJC rocked @deb_teams with a 16-2 win in their opening game of their #WorldJuniors