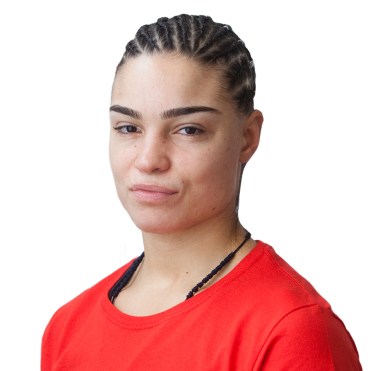 At her very first Canadian championships in 2009, Caroline Veyre found herself on the podium with a bronze medal. By 2012 she had moved up to claim silver and in 2013 she won the first of her two straight national titles. Also in 2013, she made her debut at the American Women’s Continental Championships and won a bronze medal, a result she would repeat in 2014 when she competed at her first AIBA Women’s World Championships. Veyre earned her spot on the team for TORONTO 2015 by winning the Pan Am Games qualifying tournament in Tijuana, Mexico in early June.

Family: Twin sister Isabelle… Younger brother Francois… First came to Canada in 2000 when her mother went to Montreal for cancer treatment; they loved the people and immigrated in 2003… Getting into the Sport: Started boxing at age 18 as a way to stay in shape and learn self-defense… Outside Interests: Has a degree in translation… Enjoys reading, watching TV, playing volleyball and soccer in the summer, playing hockey in the winter, playing billiards, cards, learning new languages… Odds and Ends: Favourite motto: “It is difficult to beat someone that never quits”… Inspired by Floyd Mayweather Jr because he is the only boxer she finds beautiful to watch technically; he masters what he does to perfection… Always carries a rosary and prays before competing… Nickname: Caro…