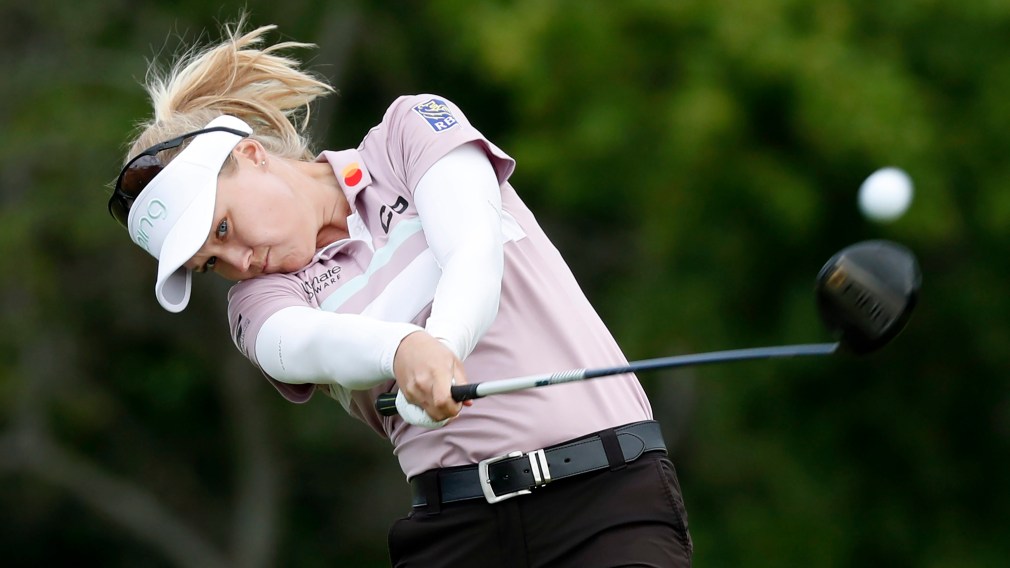 Brooke Henderson swung into Canadian history with her tenth victory and set a new record for number of LPGA wins by a Canadian.

The 23-year-old had a successful weekend at the Hugel-Air Premia LA Open and a rapid rise to fame since becoming professional in 2014.

Let’s check out Henderson’s previous successes that lead her to this legendary victory: 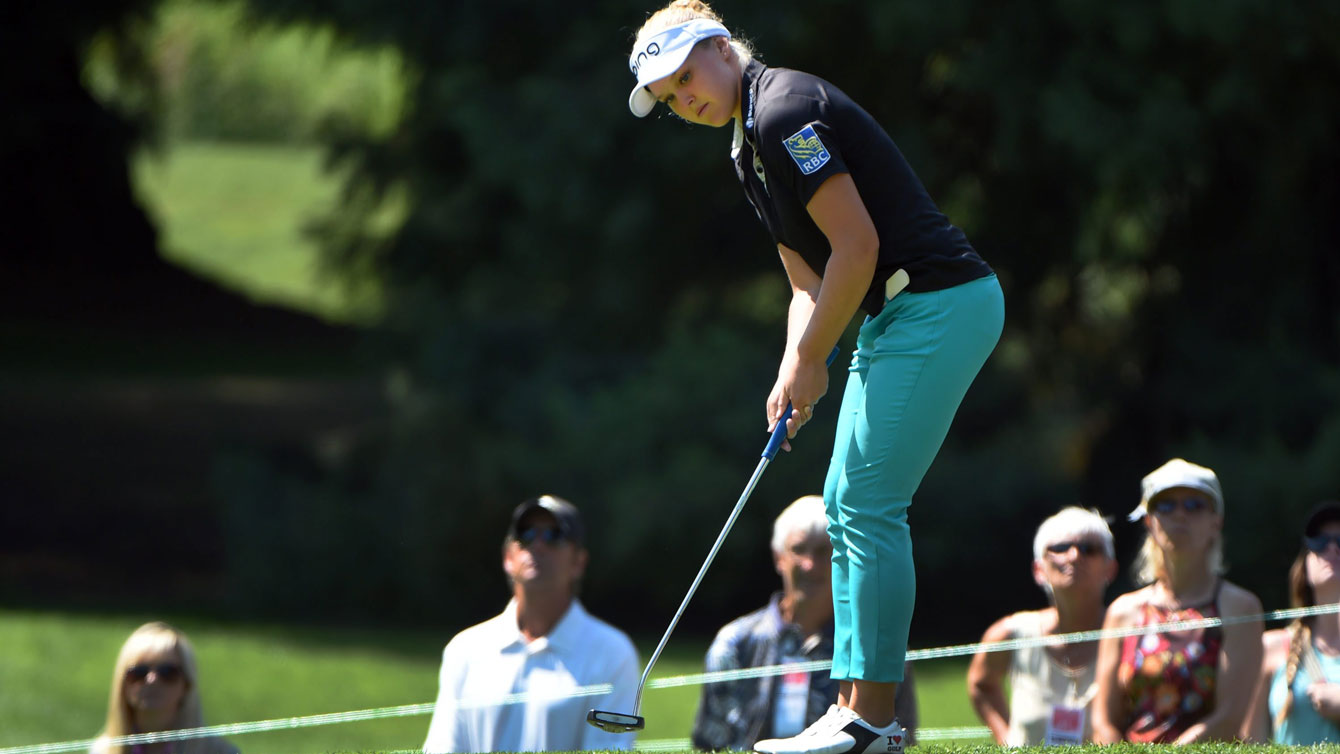 A LPGA win by a non-member in the tour was ground-breaking on its own. But Henderson went one step above by claiming the title with an eight shot victory. Known as the largest margin of victory on the tour at that time, Henderson earned herself immediate LPGA membership by Commissioner Mike Whan.

The 18-year old became the second youngest player in LPGA history to win a major championship and also landed herself the LPGA rookie of the year. 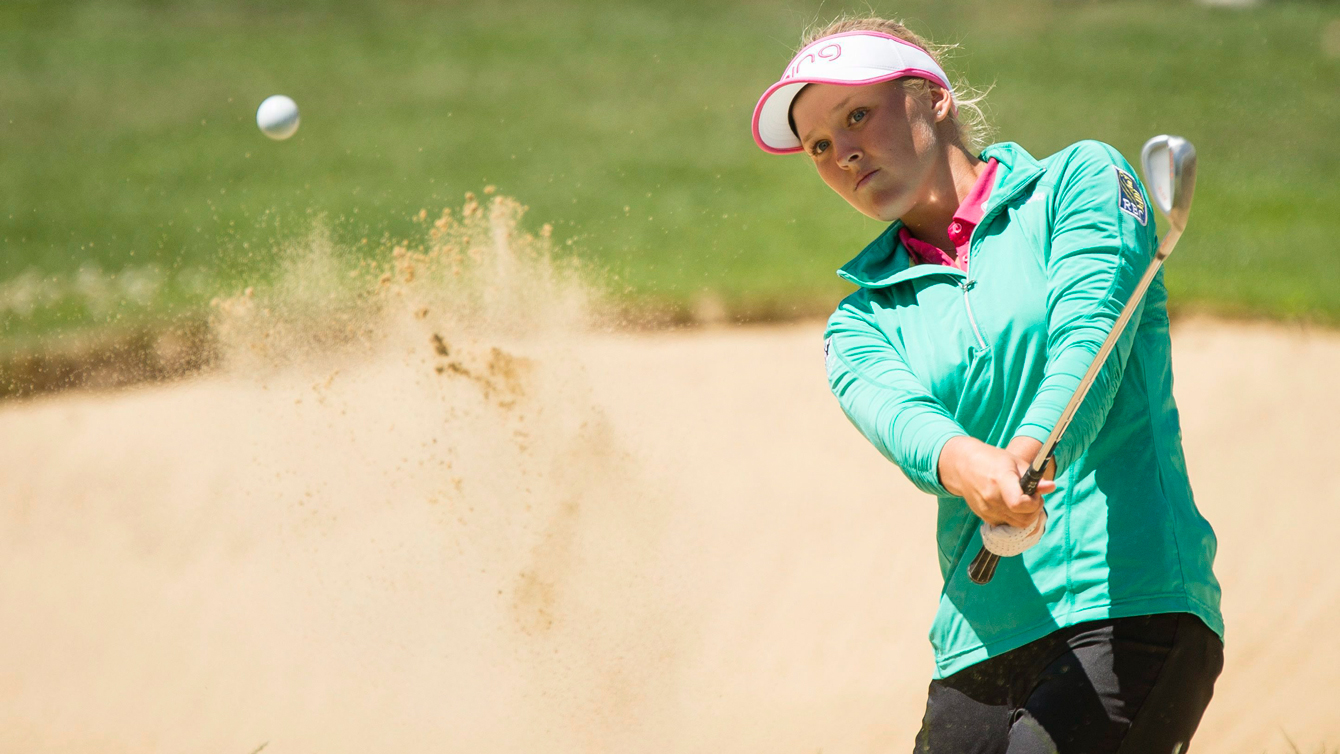 Having an official LPGA membership under her belt, Henderson gained some popularity in the golf domain for her second year in the tour.

Securing her second LPGA title from a birdie in round one, Henderson became the youngest player to win that major and the first Canadian woman to win a golf major since 1968.

During the Cambia Portland Classic Presented by JTBC Henderson dominated the course with 14-under par and defeated the talented Stacy Lewis by 4-shots.

In 2016, Henderson also was a member of Team Canada squad at the Rio 2016 Summer Olympics placing a strong seventh in the tournament. 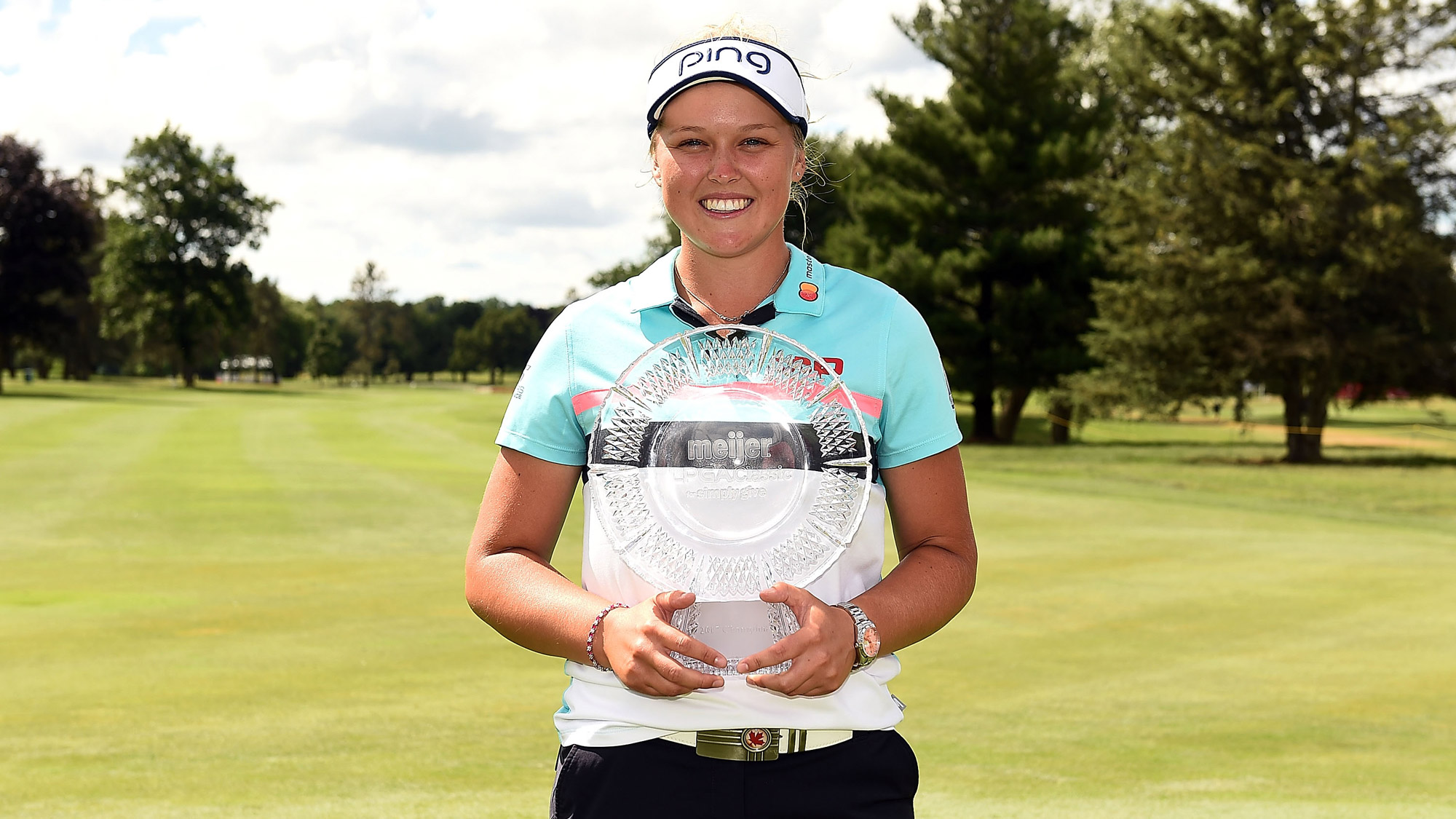 At the Meijer LPGA Classic for Simply Give Henderson not only captured the title but was able to achieve a career-low 63 in the first round.

Despite the windy weather conditions Henderson was able to stay consistent throughout the tournament and gear past fierce American competitors, Michelle Wie and Lexi Thompson. 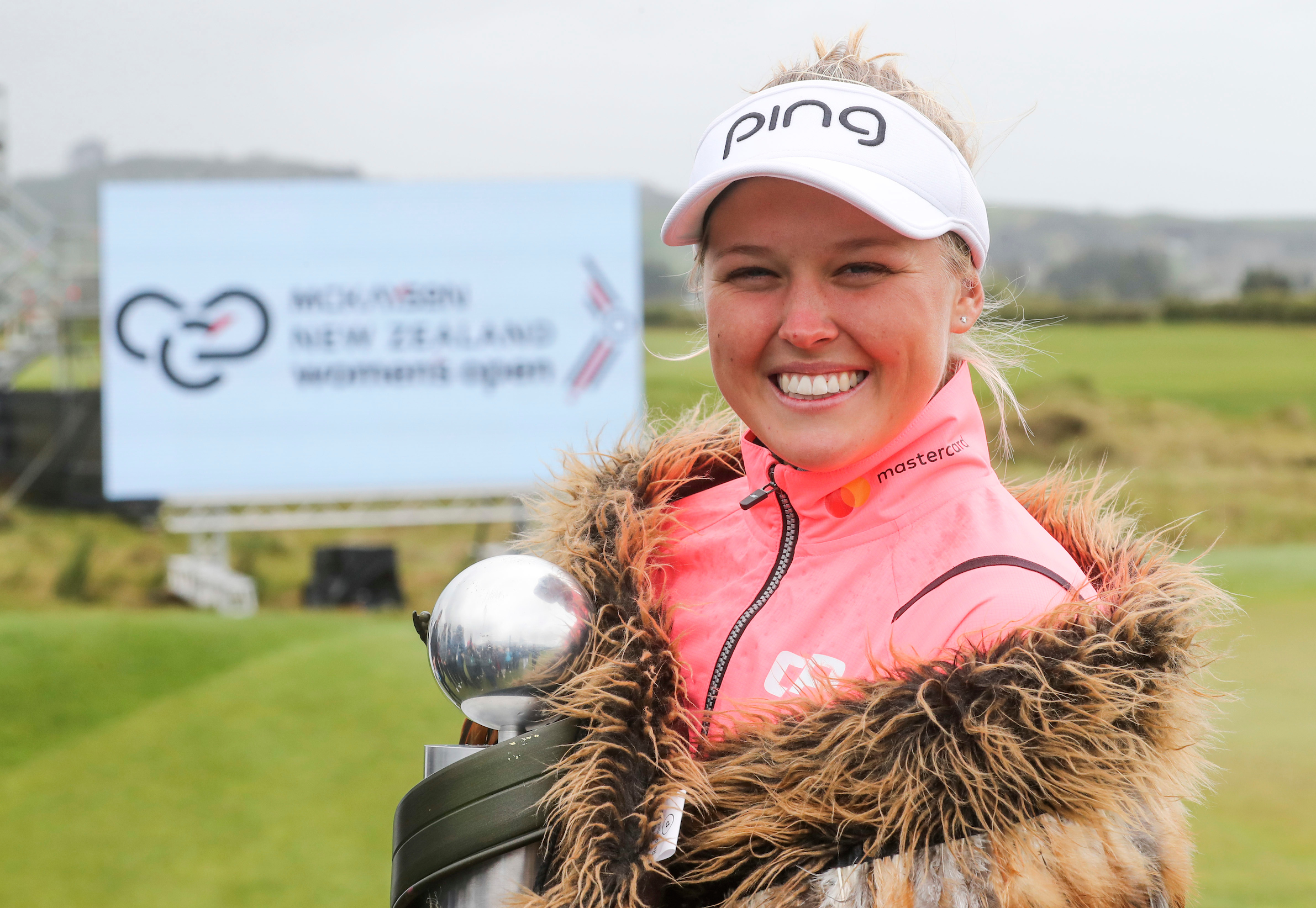 Persevering through yet another LPGA tournament with challenging weather conditions and a one shot deficit on the first day, Henderson was able to pull away with her first win outside North America.

Struggling with the strong wind during the tournament, Henderson lived up to her character and showed her perseverance and passion for the game. After being one-over round of 73, she finished the win with a 12-under par total of 276 to come out with a win.

Demonstrating her love for Canada and the hockey community, after her victory Henderson dedicated her win to the Saskatchewan, Humboldt Broncos hockey team.

“If people can find that love and passion for the game, good things will happen for them.” @BrookeHenderson #WeAreCanadianGolf

LPGA win number seven was Henderson’s first CP Women’s open title. Henderson lived up to her talent and became the first Canadian in 45 years to win the CP Women’s Open.

The title had not been won by a Canadian since Jocelyne Bourassa in 1973.

In April, Henderson played at the Lotte Championship in Hawaii. Struggling throughout the tournament, Henderson started the final round with pressure after she bogeying her first hole.

She was able to gain momentum and follow with three birdies and 14 pars, allowing her to defend her title with 2-under 70 and one step closer to the national championship.

At the tournament, Henderson broke the national record she tied at the LOTTE Championship, which was until then held by Sandra Post, Mike Weir and George Knudson.

Congrats @BrookeHenderson what a huge accomplishment at such a young age! Hopefully inspiring more women & men to play our great sport! #number8

In June, Henderson made Canadian history with her ninth victory at the Meijer LPGA Classic. Henderson broke a tie held for the number of LPGA and PGA wins by a both Canadian men and women, held by George Knudson, Mike Weir and Sandra Post. 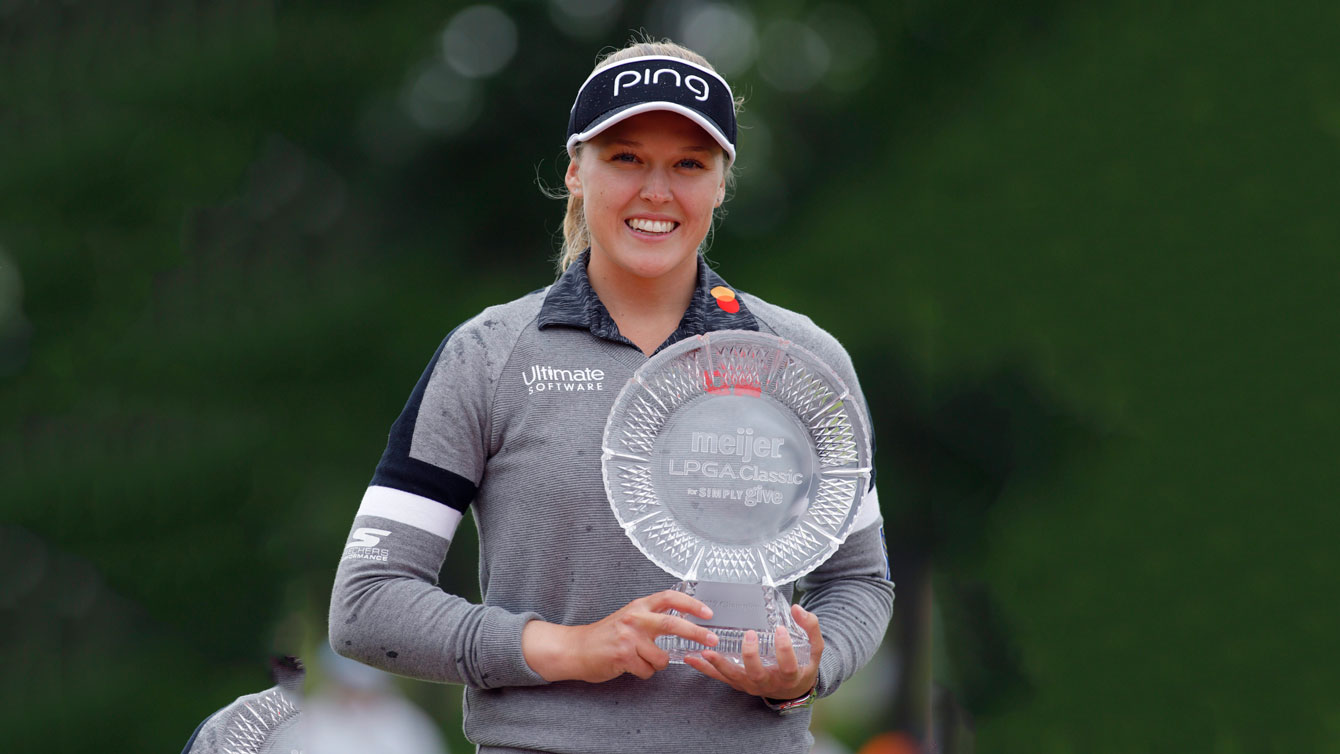 In her 13th event of the 2019 season, Henderson finished the final round 2-under-par 70 for a four-round total of 267, which gave her a one-stroke margin advance on the leaderboard.

23-years-old Henderson started the final day at the Wilshire Country Club four strokes behind leader Jessica Korda and three back of top-ranked Jin Young Ko. Henderson shot 4-under 67 and held on for a one-shot victory after closing the gap for her first win since 2019.

With more titles at the top level of golf than any Canadian, it is likely this is not Henderson’s last major accomplishment in the sport of golf, and Canada and Brooke Henderson fans are excited to see what will be added to this list in the future.