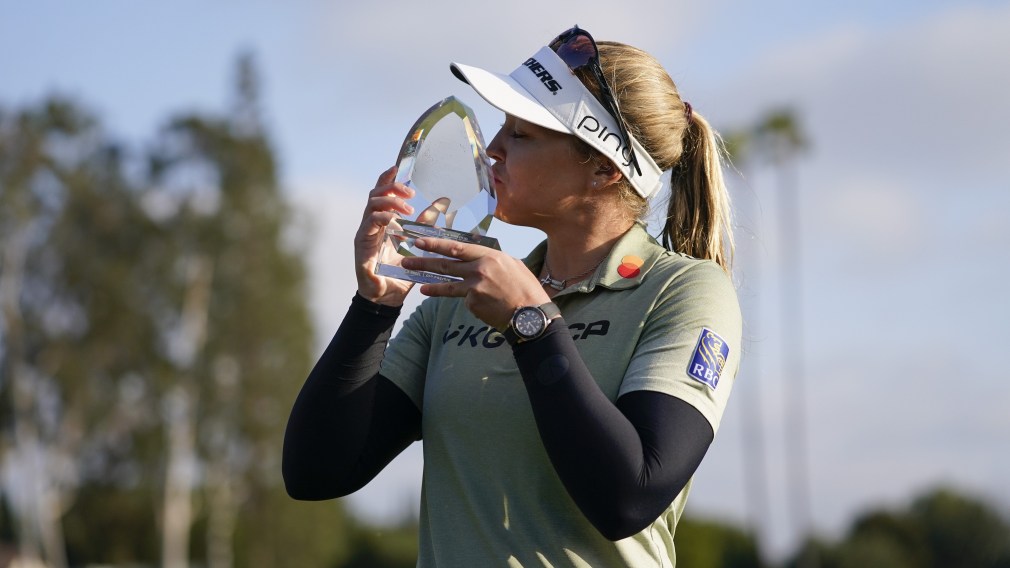 Brooke Henderson celebrates her 10th career victory on the LPGA circuit after winning the Hugel-Air Premia LA Open on Saturday. She has more titles at the top level of golf than any Canadian.

23-years-old Henderson was four strokes behind leader Jessica Korda and three back of top-ranked Jin Young Ko heading into the final day at the Wilshire Country Club.

Henderson shot 4-under 67 and held on for a one-shot victory after rallying against American Jessica Korda and Japanese Jin Young Ko for her first win since 2019 to hoist the trophy on Saturday.

The sixth-ranked Henderson birdied the par-4 11th to take the lead at 15 under, hitting a 144-yard shot to 3 feet of the back, right pin. She holed out from 70 feet from right and below the green on 12, and made a 6-foot birdie putt on the short par-4 14th.

She bogeyed the par-4 17th to cut her lead to two. On the par-3 18th with Korda in position for a short birdie putt, Henderson chipped inside 2 feet for par after her 8-iron shot rolled off the edge of the green and into a low collection area.

Henderson won for the first time since the Meijer LPGA Classic in June 2019, where she broke the tie held for the number of wins by both Canadian women and men on the PGA and LPGA Tours.

With this win at the LA Open, Henderson punches her ticket to the 2022-23 Tournament of Champions.