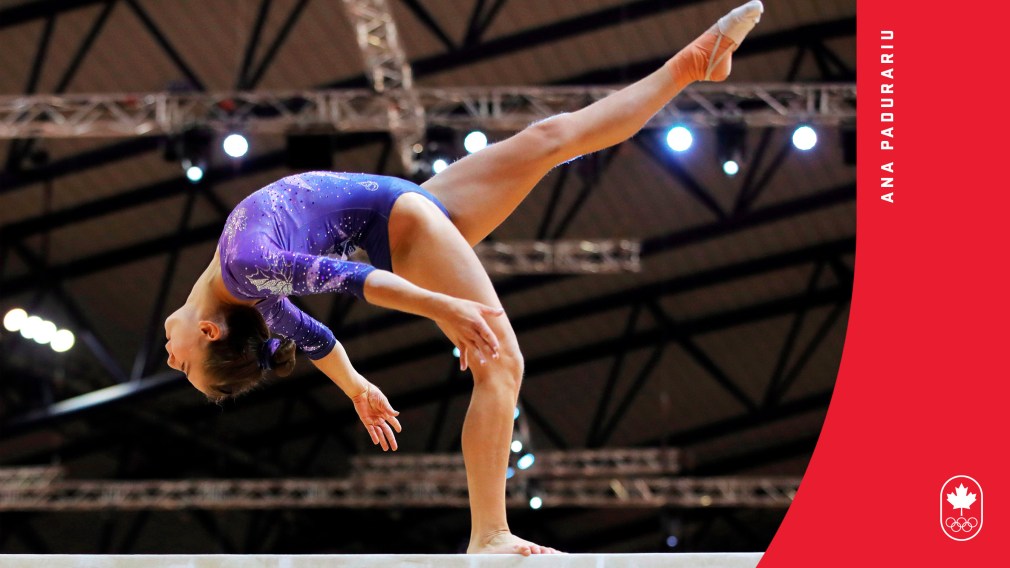 I knew 2020 would be a challenging year; I just didn’t know all the challenges I would face.

I was going into this year with a left ankle that needed surgery, as well as a sprained ankle and toe, so pain medications and I became pretty close friends.

However, they were injuries that I was willing to push through until my Olympic dream finally came true. 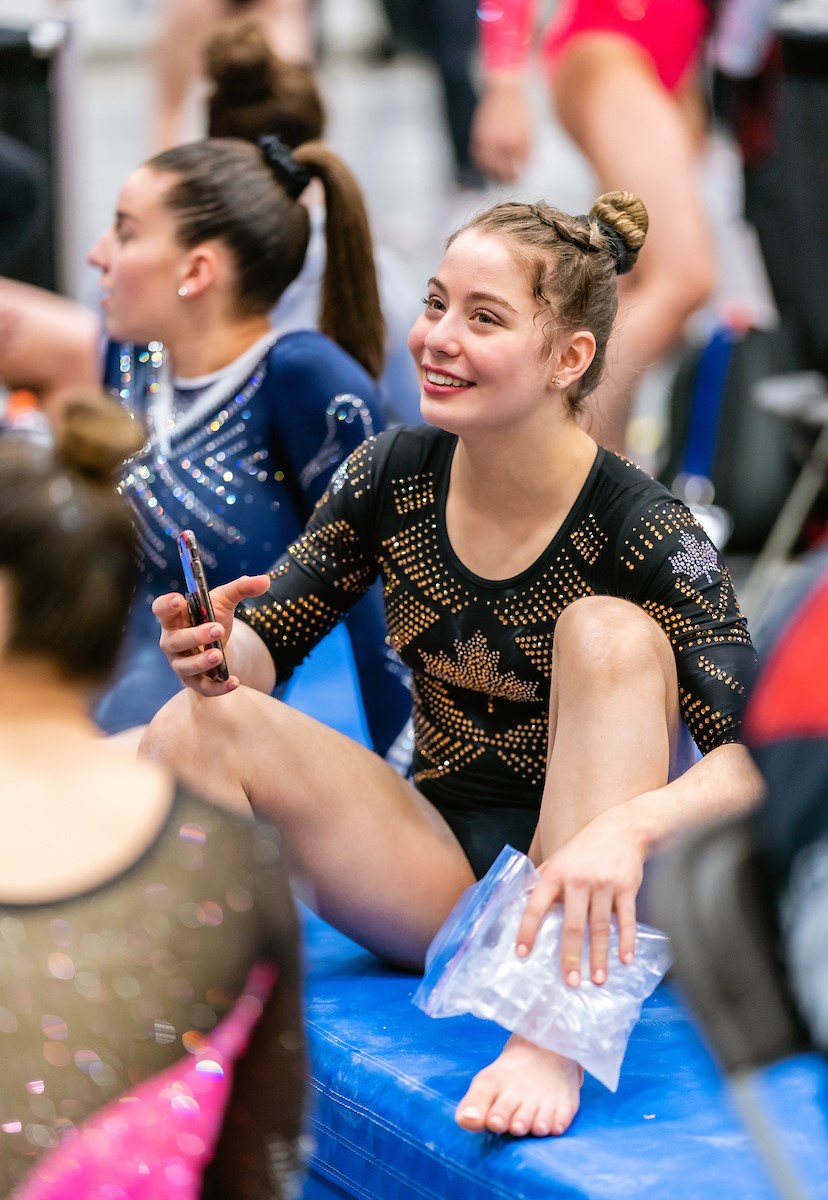 Then suddenly, the world started experiencing a catastrophe that none of us have been through before. Competitions that were in the near future started getting cancelled and – I’m not going to lie – I was relieved.

I figured that the pandemic would last a month or so, but I would still be training, using soft mats for the skills in my routines. This would give my body the physical and mental rest it needed while I still stayed in shape for Olympic Trials at the end of May.

Then, on the night of March 22, as I laid in bed getting ready for another long day of training, I got a text message explaining that the Canadian Olympic Committee had decided to take the stance that Team Canada would not participate in the Tokyo 2020 Olympic Games if they were to go ahead this summer.

Within a couple of days, it was announced that the Olympics were officially postponed until 2021. 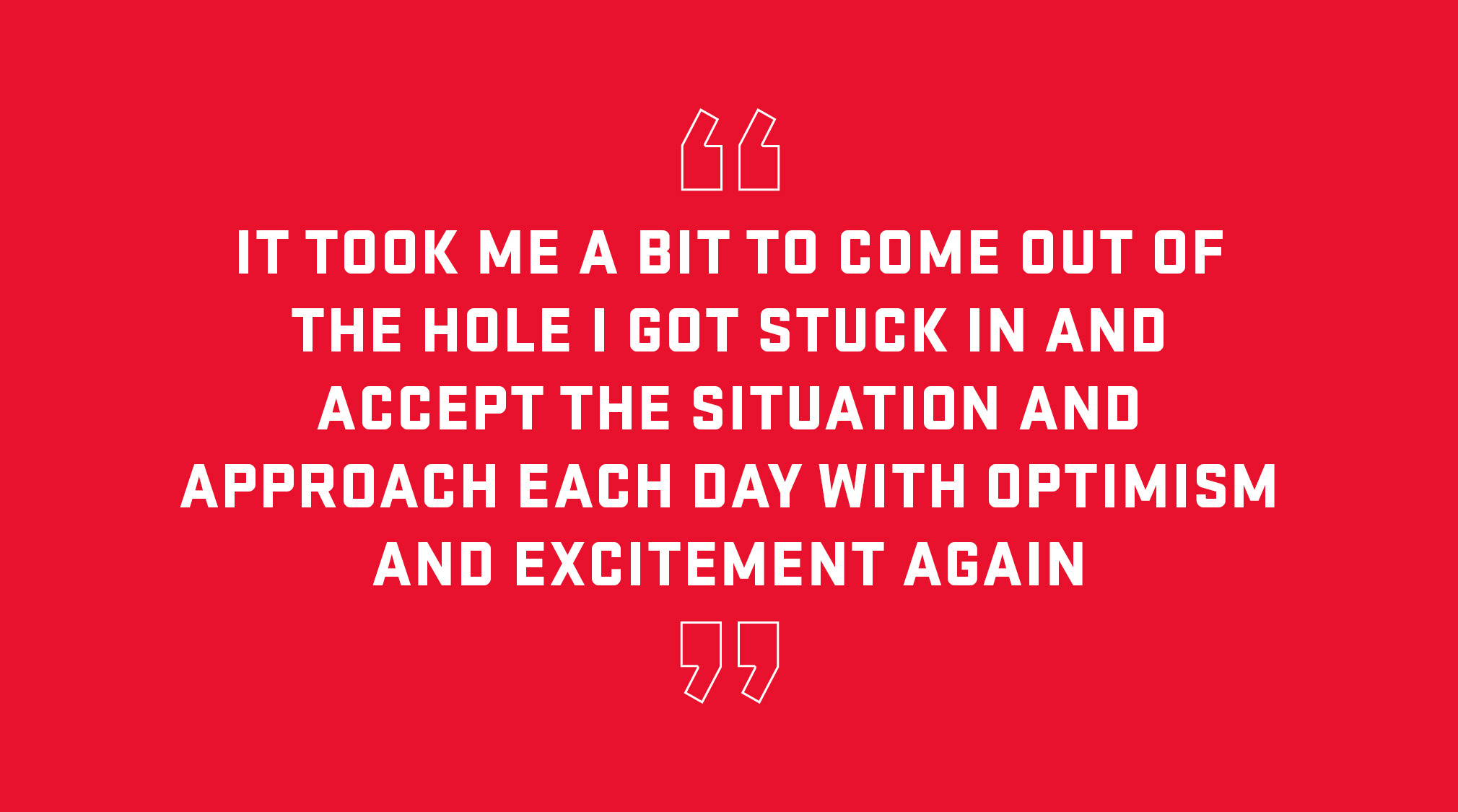 What started as a tide of disbelief, anger, and sadness all merged into a big wave that washed over me.

I drowned in it for days.

I was getting supportive messages from coaches and teammates, but I just wanted to escape it all and pretend that none of this was happening. I didn’t want to believe that the entire team’s commitment and hard work just got washed away by something not in our control.

It took me a bit to come out of the hole I got stuck in and accept the situation and approach each day with optimism and excitement again.

Mentally, I was ready to have some time off from training, after countless hours in the gym and no vacation for many years.

I also learned to appreciate the little things that I did have.

I picked up a few hobbies that I haven’t had time for recently, like playing the piano and drawing. I also kept in touch with a lot of people. My coach Elena Davydova put together a specially designed conditioning program so that when the time came to go back to the gym, our bodies would still be in good physical shape. 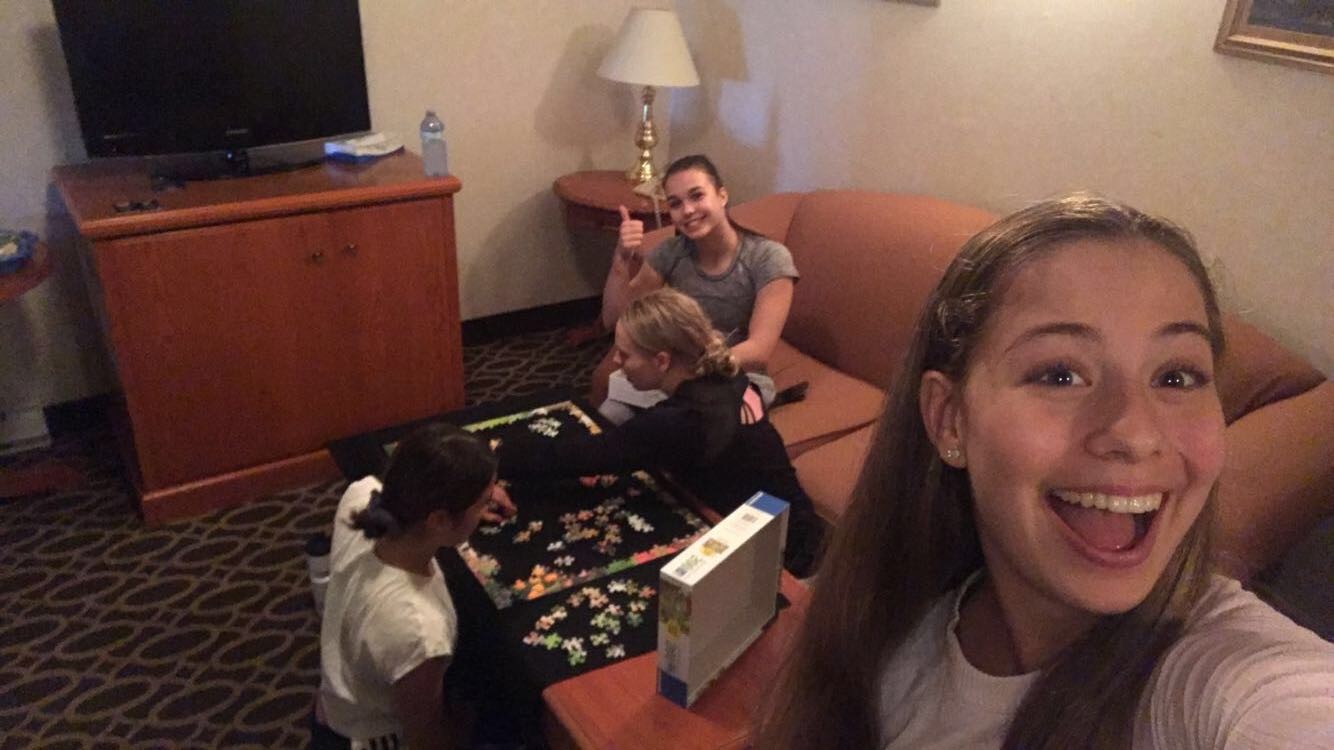 We’ve done weekly video calls with my training group and many meetings with Gymnastics Canada. These ranged from working on artistry, to doing pilates, to working on the mental aspect of training, to going over nutrition, as well as having fun contests. We’ve had trivia nights, a talent show, and crazy hair challenges, all with small prizes. Our national team coach also paired each junior gymnast with a senior for conditioning sessions. This was a really awesome way to connect and get to know all the sweet girls on our team.

My ankles also had time to heal. I didn’t do anything on them for about two weeks, but then I started back slowly. I now go on morning runs to keep up my endurance. I was given a small beam that I use to practice some of my skills, but it’s undoubtedly harder to train on the road and grass rather than a bouncy floor! 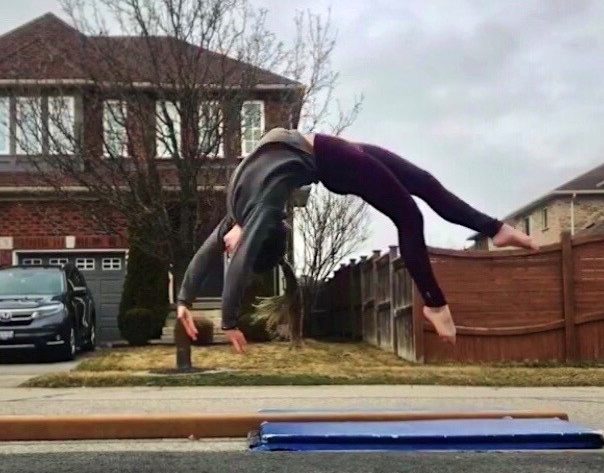 I recently started actual training again and have regained my love and motivation for the sport. Of course there are strict rules in place, as we have to physically distance from the few girls that are allowed to be in the gym at one time and the coaches are doing a great job disinfecting the equipment many times a day.

It definitely felt really weird to be back on the apparatuses, especially the uneven bars as it is the most difficult event to train at home. As I am still growing, I have to constantly adjust to my different body. After the first day back, I could barely sleep for two days because I was so sore. However, muscle memory kicks in every time I try an old skill for the first time again. I have missed the adrenaline rush from trying something that scares you a bit, but then completing it successfully.

Throughout this whole period of time, many people were involved in a discussion about whether or not I will be attending UCLA this fall to continue my education, as was originally planned before the Olympic postponement. Everyone was very supportive and said that it all came down to whatever I desired, which I was very appreciative of.

There were so many variables to consider. But I decided that I will take on Elite gymnastics as well as NCAA.

The gymnastics aspect is easier in NCAA, considering that the main goal is to get that perfect 10, therefore, there is also less training than I am currently used to. I have been training over 30 hours a week for the past seven years in pursuit of the Olympic Games, but NCAA rules state that gymnasts can only train a max of 20 hours. I will have to request my own training if I feel the need to exceed that to stay on top of the more difficult skills I need for Elite competition.

Nevertheless, I know that the UCLA coaches are all very experienced in all levels of gymnastics and are ambitious to aid each girl in making our dreams come true.

There is also tremendous academic support from the school to prevent me becoming too overwhelmed with all the training and classes that I will have to keep up with in order to accomplish my dream of becoming a biomedical engineer.

It will be challenging to be so far from my family and friends for the next four years, but I’m excited to be alongside Olympians and award-winning professors, who have inspired my academics and gymnastics for many years. 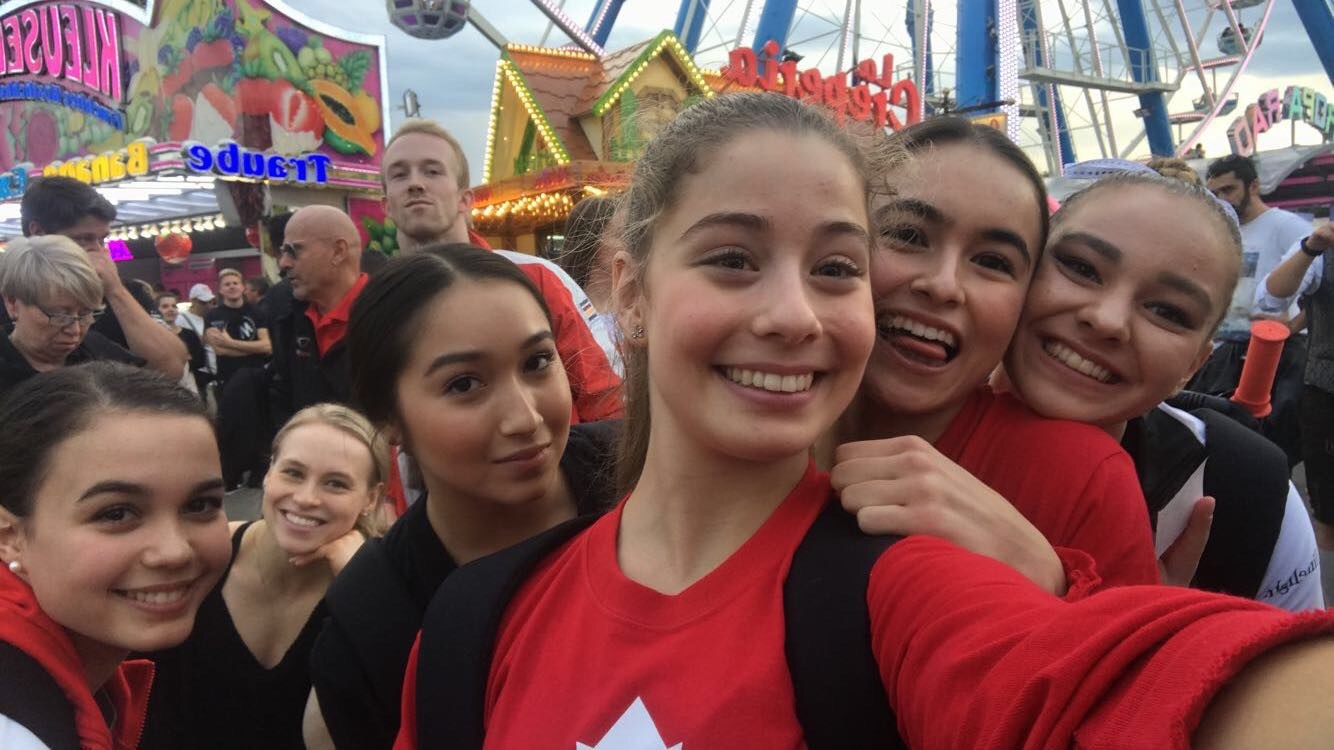 I am so blessed to be part of a national team with magnificent coaches who have decades of experience with this sport and have helped grow every single girl into not just amazing gymnasts, but also incredible people. Our team bond over the years has grown so tightly that we are constantly laughing together, motivating, and always supporting one another through the good and bad experiences.

Every person brings a unique aspect to the team which makes us so diverse and special. Ellie is like the cool mom, Victoria acts as a big sister, and they both take care of the team. Shallon is the quirky one, and Brooklyn and Rose bring poise and elegance. I like to be the jokester that loves crazy socks. 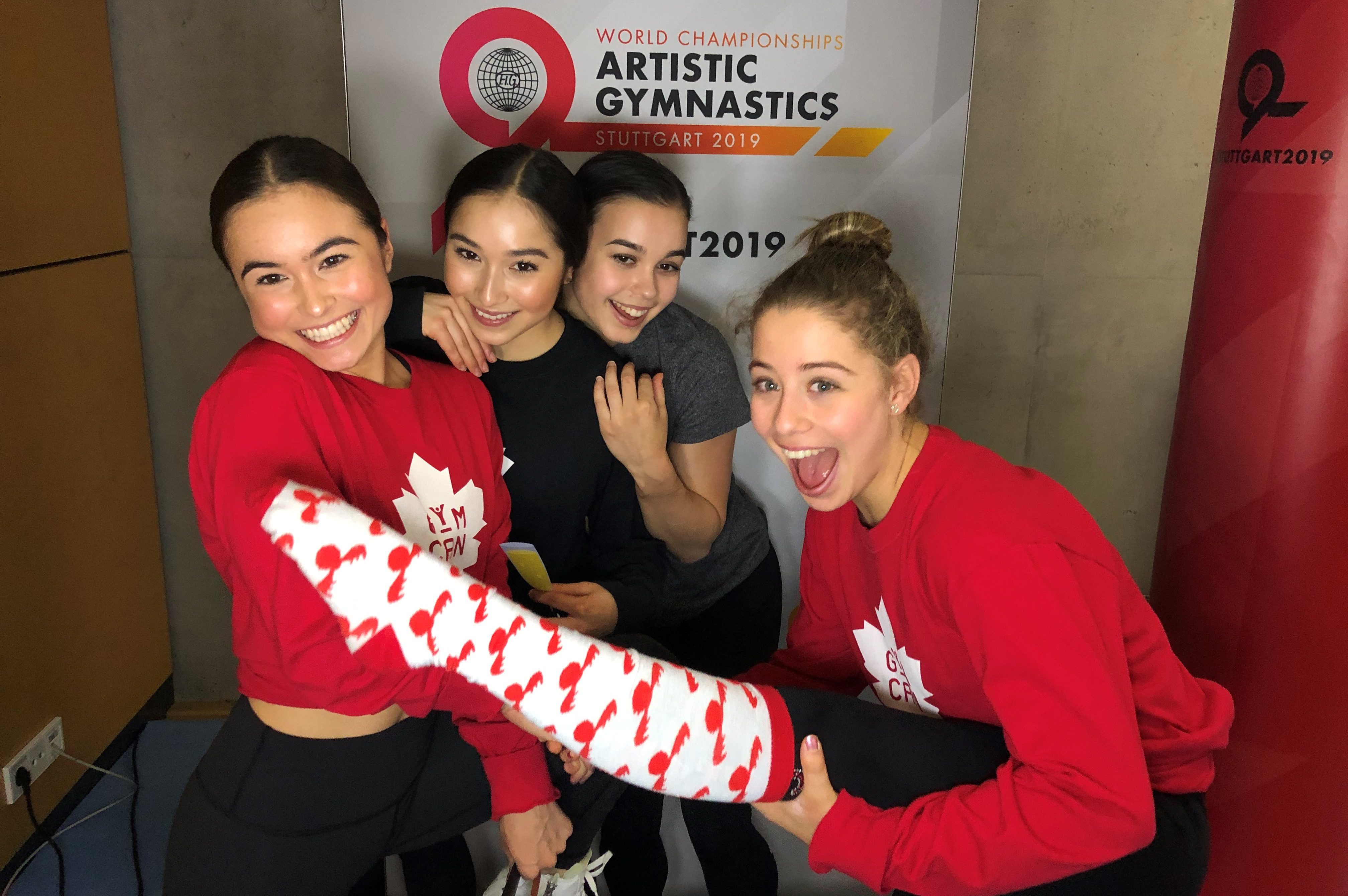 The continual teamwork and diligent training brought by the entire team, including everyone behind the scenes, has made the past few years some of the most successful ever for Canadian gymnastics. I am thankful everyday that I have the opportunity to represent this beautiful country and make friendships and memories that will last a lifetime.

Ana Padurariu made her world championship debut in 2018, winning the silver medal on beam and helping Canada to a best-ever fourth-place finish in the team event. A year later, she was on the squad that qualified Canada’s women’s artistic gymnastics team for Tokyo 2020, where she aims to make her Olympic debut. In mid-September, Ana announced that she would be deferring attending UCLA for a year.

After a lot of thought, I have decided to defer a year from ucla. I’ve been looking forward to attending this prestigious dream school for so long but due to the pandemic and all the restrictions applied, it is best to stay home to recover and prepare for my Olympic dream. Thank you to everyone who’s been really supportive, I can’t wait to see the team achieve some amazing things this year💙✨ #gobruins #4sup