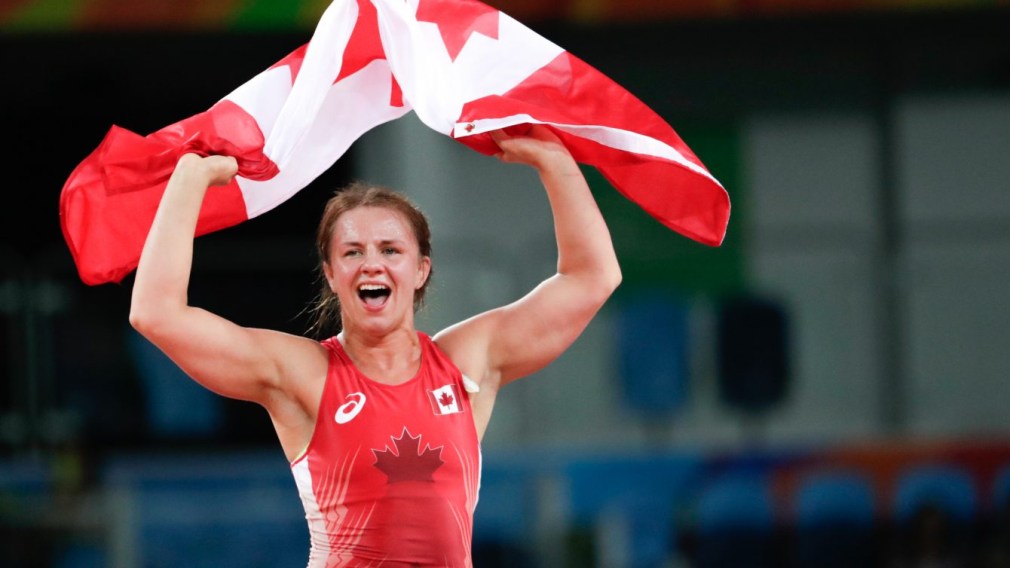 In this series, you will get the chance to relive some amazing moments in Canadian sport, through the eyes and mind of the athletes themselves. Using picture-in-picture, Team Canada fans have the chance to re-experience these exceptional performances along with the athletes.

“That day that I competed at the Olympic Games I was so ready to have my best performance.”

Erica Wiebe from Stittsville, Ontario went into her Olympic debut at Rio 2016 as the second-ranked wrestler in the world in the women’s 75kg division.

Wiebe was no stranger to success, having collected medals across various competitions prior to Rio 2016.

When three-time world champion, American Adeline Gray, was defeated by Belarus’ Vasilisa Marzalyuk in the quarterfinals, that opened up a perfect opportunity for Wiebe. In the final four, she would just have to get past Marzalyuk to have her shot at Olympic gold.

Wiebe pulled off a clean victory in the semifinal, defeating her opponent 3-0. Her success didn’t stop there, as she would go on to capture gold with another stellar performance against Kazakhstan’s Gyuzel Manyuroya, winning 6-0 in her first Olympic Games.

“We looked at each other and were like, “We’re gonna win this.”

In the mid-’90s, Team Canada was hitting its stride when it came to sprinting. At the 1995 World Championships in Sweden, Donovan Bailey and Bruny Surin shared the podium in the 100m, winning gold and silver. Both were members of the 4x100m relay team, which was also firing on all cylinders. With Robert Esmie and Glenroy Gilbert running the first two legs, they were crowned world champions in 1995.

Fast forward to Atlanta 1996. The Canadian team was riding in on a high note, yet were not touted as the favourites to win gold. Many expected the Americans would win on home soil, despite failing to finish their heat at the 1995 Worlds. The U.S. had won all but four of the Olympic gold medals ever awarded in the men’s 4x100m relay (when they either didn’t compete or were disqualified for bad baton exchanges).

After Carlton Chambers ran the opening leg in the heats and semifinals, Esmie came in for the final, sporting his now-iconic look with the words “Blast Off” shaved on his head.

The race was perfectly run by Team Canada, capped by Surin’s hand-off to the anchor Bailey. He secured Canada the gold medal in the men’s 4x100m relay with a national record time of 37.69s that would stand for 20 years until it was broken at Rio 2016.

Mark Tewksbury made his Olympic debut at Seoul 1988 with a strong fifth-place showing in the 100m backstroke.

Over the next few years, Tewksbury established himself as a podium performer in that event, including silver medals at the Pan Pacific and World Championships in 1991, where he finished behind American Jeff Rouse both times.

Heading into the 1992 Olympic Games, Rouse was heavily favoured to take home the gold, after setting the world record of 53.93 seconds in August 1991 at the Pan Pacs under a new rule that didn’t require a hand touch at the turn.

Rouse started the race as expected and had the lead at the turn, but Tewksbury came back to out-touch Rouse at the wall and won the gold medal by 0.06 of a second. In the process, he set an Olympic record of 53.98s.

“As I stepped onto the floor, I said, “make it happen.”

With both those men, as well as two-time world champion Marian Drăgulescu of Romania in the eight-man Olympic final, Shewfelt would need to be at his best to win Canada’s first ever Olympic medal in artistic gymnastics.

Drăgulescu had been the top qualifier, which he followed up with a score of 9.787 in the final. To many it looked unassailable. But then Shewfelt took to the floor with his trademark elegance and style.

Shewfelt’s performance was exceptional and he tied Drăgulescu’s score. After a complex tie-breaker system was used, Shewfelt was awarded his Olympic gold medal.