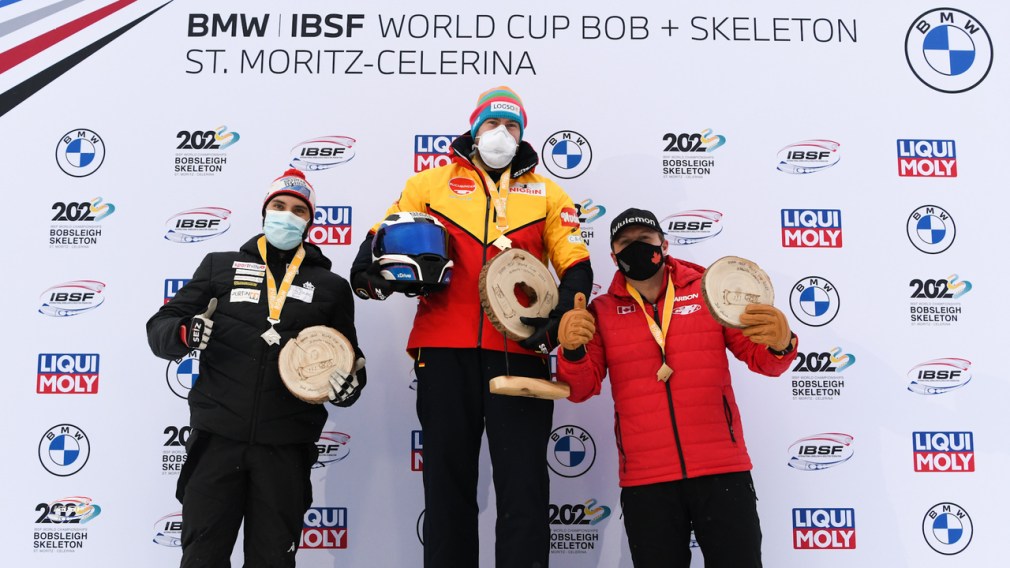 For his seventh four-man podium since 2018, the team of Justin Kripps, Ryan Sommer, Ben Coakwell and Cam Stones received a combined two-run time of two minutes 10.05 seconds. The Canadians executed two decent pushes combined with two solid drives down the 1,700 metre naturally iced piece of sliding sport art and saw a faster first run, by only 0.05 of a second.

BRONZE for Team @justinkripps in St. Moritz after blazing through the back half of the track 🥉🇨🇦

Kripps, @CamStones, @Ryansoms and @bencoakwell are just the 3rd Canadian sled ever to medal in both the 2-and 4-man events on the same weekend in St. Moritz 🇨🇦 pic.twitter.com/Fl1eqS17TW

This is Kripps and Stones second bronze medal of the weekend. Previously on Saturday, the two men slid to their first two-man bobsleigh medal of the season and first career two-man podium in Switzerland.

“It was awesome for us to get a double podium here in St. Mortiz. We sure missed the crowds and the champagne this year but we’re loving building this momentum together,” said Kripps

This bronze medal also marks Kripps’ tenth career four-man win as pilot. In February of the 2020 season, team Kripps captured the gold medal at the World Cup in St. Moritz to secure their first ever top-three finish in overall standings.

Competition wraps up today at the legendary course in St. Moritz, Switzerland. This is the second World Cup of the season for the Canadian team.

The IBSF World Cup circuit heads to Königssee, Germany next weekend from January 23 – 24.