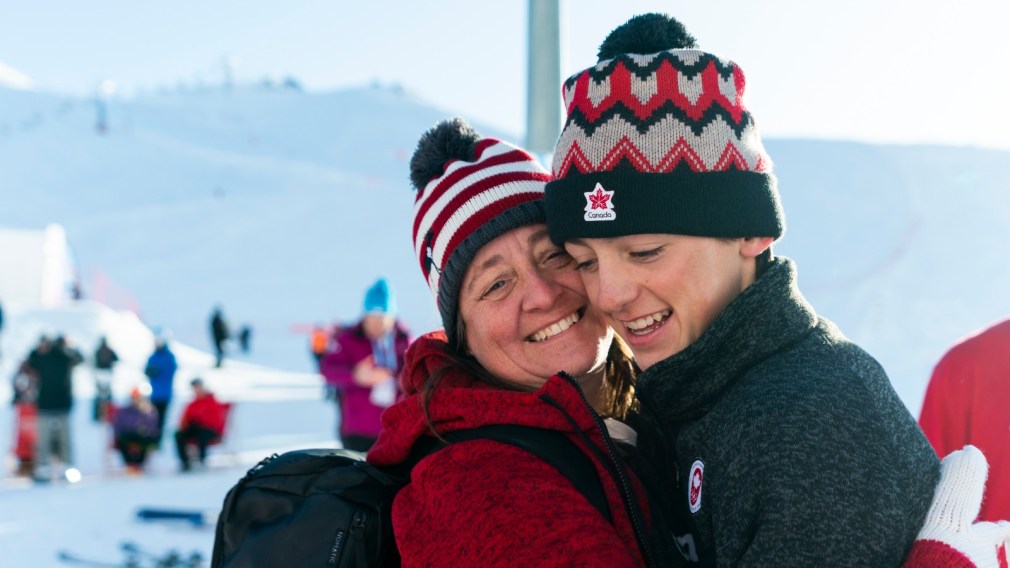 From historic firsts to podium finishes, Team Canada had multiple fantastic performances around the world this weekend.

Check out all the hair-raising details (you’ll see what we mean!):

I’m with Canada’s first medal winners at the Youth Olympics.

Caitlin Nash and Natalie Corless won silver in the first ever Youth Olympic girls’ doubles luge event on Saturday, sliding to Canada’s first medal at Lausanne 2020. The 16-year-olds from Whistler, B.C. took to the historic, one-of-a-kind, naturally made track of ice and snow in St. Moritz, Switzerland with friends and family cheering them on.

Over on the short track, Florence Brunelle captured bronze in the women’s 1000m and 500m events. With her 1000m medal, she became the first ever Canadian short tracker to win a medal at the Winter Youth Olympic Games.

🇨🇦Liam Brearley celebrates with his mom Janis at the bottom of the hill after winning silver in snowboard slopestyle.

Janis was delayed two days. This event was supposed to happen yesterday. Weather cancelled it. She’s here to see this because of that. Remarkable. Story coming. pic.twitter.com/RsM1PwzPsv

Elsewhere in Lausanne, Team Canada advanced to the men’s ice hockey semifinals after shutting out Denmark 6-0 in the final game of preliminary play on Sunday.

Running into the Record Books

South of our border, Malindi Elmore and Natasha Wodak made Canadian history at the Houston Marathon on Sunday.

Where do I even begin to thank everyone who was with me today – in my heart and on the course – while I was able to do something I love and achieve something that, until recently, was never on my radar? I can’t believe my run today in Houston was a Canadian Marathon record! I always identified with being a middle distance runner and not a (crazy) distance runner…until I realize how fun training and racing is, and how fun it is to seek new challenges. Needless to say, I am now hooked :) I am so incredibly grateful to the amazing community of runners, friends and family who have been part of this journey. Most of all @grahamthehood who never gave up on me and nailed the coaching for me this last year with our family first philosophy. So awesome to be greeted at the line by so many of my Canadian running friends, including @tashawodak who broke the Canadian half marathon record today – and who is someone I raced against 20+ years ago in high school!! full circle! And of course, to the amazing Silvia Ruegger, @lannimarchant, @raecliff, @kristaduchene, @daynapid whose own marathon exploits in Canada have inspired me. Feeling grateful and incredibly fortunate to do something I love.

Elmore set a Canadian marathon record and met the Olympic qualifying standard after running a time of 2:24:50.  She shaved two minutes off the previous record of 2:26.56 set by Rachel Cliff last year. Elmore made her Olympic debut at Athens 2004 where she competed in the 1500m, and now, 16 years later, is on track to qualify for Tokyo 2020.

Wodak also made history in Houston, running the half marathon in a record time of 1:09:41 to become the first Canadian woman to complete it in under 1:10.

First Time at the 🔝

Over on the slopes, Reece Howden captured his first ski cross World Cup podium finish and victory in the men’s event on Saturday in Nakiska, Alberta. Howden has previously won gold at the 2016 Youth Olympic Games. The 21-year-old Canadian was joined on the podium by Kevin Drury who captured silver for a double podium finish for Canada.

Continuing the success on the slopes was snowboarder Sébastien Toutant, who returned to his first World Cup competition after two years to claim slopestyle gold with a posted score of 87.25 in his second run at the Laax Open in Switzerland.

Vegas✈️ Sydney✈️Melbourne✈️Adelaide ✈️Gold Coast✈️Shenzhen✈️Beijing The past 5 weeks have been unreal! Happy to finish off this trip with a win! See you soon College Station!

Sydney Pickrem was victorious in the women’s 200m individual medley at the FINA Champions Swim Series in Beijing, China. She upset reigning Olympic champion Katinka Hosszu of Hungary, who was unbeaten in the 200m IM for the past SEVEN years, winning 56 consecutive long course and short course races.

This win marked Pickrem’s second medal of the weekend, after taking home bronze in the women’s 200m backstroke on Saturday.

Moving on Up Down Under 🦘

17-year-old Leylah Annie Fernandez qualified for her first-ever Grand Slam main draw after defeating American Danielle Lao 7-5, 7-5 in the Australian Open qualifiers. She is the lone woman representing Canada in the main draw, as Bianca Andreescu remains out with a knee injury.

⛷ Back onto the Podium

.@usskiteam’s Caroline Claire stepped it up big in run two, putting down a score of 86.13 to take today’s women’s slopestyle World Cup win in @seiseralm!

18-year-old big air specialist Elena Gaskell, posted a score of 79.68 on her second run to capture the first slopestyle World Cup podium of her career. Previously, Gaskell has captured two World Cup medals in the big air competition in the 2018-19 season. Her last World Cup podium came at the Big Air World Cup in Quebec in March of last year.

Ice dance duo Piper Gilles and Paul Poirier won their first title at the Canadian Tire National Skating Championships, tallying a total of 225.62 points. But it wasn’t without what could have been a disastrous mishap. In the early moments of their rhythm dance, Gilles’ hair became caught on one of Poirier’s shirt buttons for about five seconds until they were able to untangle from each other.

Gilles and Poirier were named to Team Canada for the 2020 World Figure Skating Championships which will take place in Montreal in mid-March. They will be joined by pairs champions Kirsten Moore-Towers and Michael Marinaro as well as ice dance runners-up Marjorie Lajoie and Zachary Lagha. One more pair and one more ice dance duo are still to be named to the team along with one man and two women following the Four Continents Championships in early February.

Well that’s sport!! Things happen and sometimes you get your hair stuck on a button. But man we killed it after!! Mental toughness 💪🏻 Bring on the freedance tomorrow!! – – – 📸 @max.gao.photography