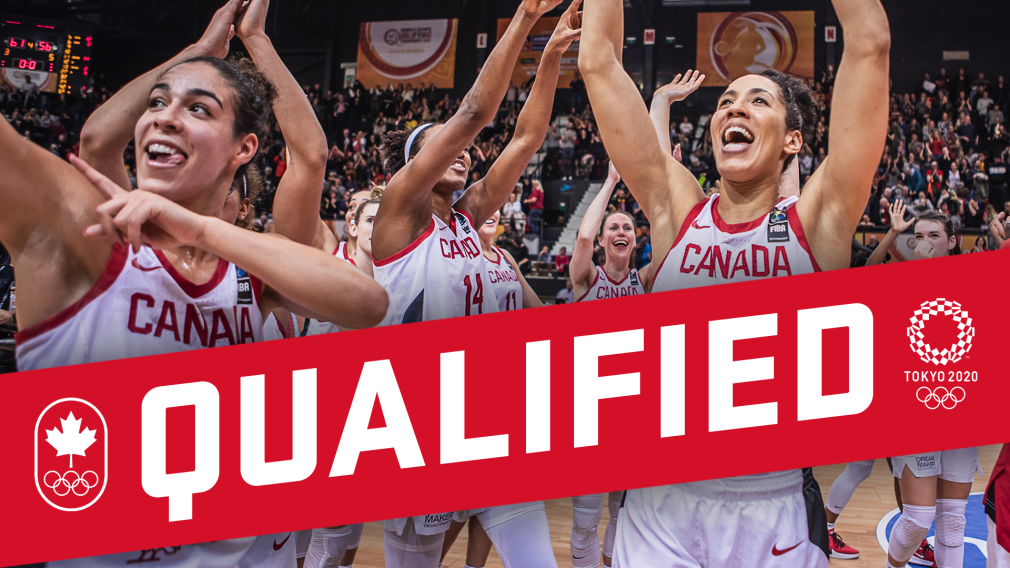 Team Canada is leaving Belgium on a high note.

After securing their ticket to Tokyo 2020 against Sweden on Saturday, the Canadian women’s basketball team beat Team Japan 70-68 to complete a final sweep of the competition this weekend at the FIBA Women’s Olympic Qualification Tournament.

While the pressure was off for both teams, who had already secured their tickets to the Olympics this summer (as the Olympic host nation, Japan is already guaranteed a spot in Tokyo), the game still boiled down to the very last second.  However, the Canadians were able to rise to the challenge and hold onto their two-point lead.

With this win, the ladies posted a perfect 3-0 record for the weekend.

Yet again, Kia Nurse and Nathalie Achonwa were dominant forces for Team Canada. Nurse led her teammates with 19 points in the game, while Achonwa put up 18 points, eight rebounds and two assists in their win over Japan. In fact, Achonwa’s strong efforts throughout the tournament named one of FIBA’s five All-Stars.

Your All-Star 5⃣ from #Ostend:

Next up, Canada’s men’s basketball team will hope to follow their female counterparts lead in qualifying for the Olympics. In order to do so, they need to win FIBA’s last-chance tournament in Victoria, B.C. in late June to book its first Olympic berth since Sydney 2000.

The Canadians booked their ticket to the 2020 Summer Olympics after defeating Team Sweden 80-50 in their second game of the FIBA Women’s Olympic Qualification Tournament in Ostend, Belgium. This marks their third consecutive Olympic appearance in women’s basketball.

After defeating host-Belgium on Thursday, Canada needed to finish ahead of them or Sweden in the standings. On Saturday, they were able to rise to the occasion.

The two teams fought hard in the game’s opening quarters, but a dominant second half gave Canada the edge they needed to come out on top. Up by six points at 37-31 heading into the third, Canada was able to put up another 43 before the final buzzer. Sweden wasn’t able to match their effort, putting up just 19 points in the third and fourth.

Natalie Achonwa shined for Canada, leading the pack with 24 points and eight rebounds in their victory.

The women’s basketball program has now joined the eight other Canadian teams that have qualified for Tokyo, including the women’s soccer team, who qualified just one day before.

They’ll wrap up their tournament tomorrow with one final game against Japan at 12 pm ET.

Team Canada is now just two games away from booking their ticket into the women’s basketball tournament at Tokyo 2020 after winning their opening match at the FIBA Olympic Qualification Tournament in Ostend, Belgium.

They took a 61-56 victory against the host Belgians.

The match was fairly close, though Canada was ahead for the entirety. At the end of the third quarter, the outcome was far from predictable as the Canadians led by just four points, 46-42.

With just over a minute to go, the score was 48-46. A foul by the Canadians gave Belgium a chance to take the lead, but they could not take advantage.

Finally, with nine seconds remaining, Canada was able to get some breathing room when the Belgians were forced to foul in an attempt to get the ball back. Instead, Kayla Alexander delivered on her two free throws, putting Canada in control. Despite final attacking efforts from Belgium, Team Canada scored on two more free throws to lock up the win.

.@CanBball 🇨🇦 held their nerve against the @thebelgiancats 🇧🇪 to complete tense a 61-56 triumph! #FIBAOQT

Canada arrived in Belgium ranked fourth in the world. Still ahead are matches against Sweden and Japan. This is one of four qualification tournaments taking place concurrently to fill the 12-team Olympic tournament. As the Olympic host nation, Japan is already guaranteed a spot in Tokyo, leaving the other three countries to fight for two Olympic berths.

Next up for the Canadians will be the showdown against the Swedes on Saturday at 2:35pm ET. They’ll close the tournament on Sunday against Japan at 12:05pm ET.