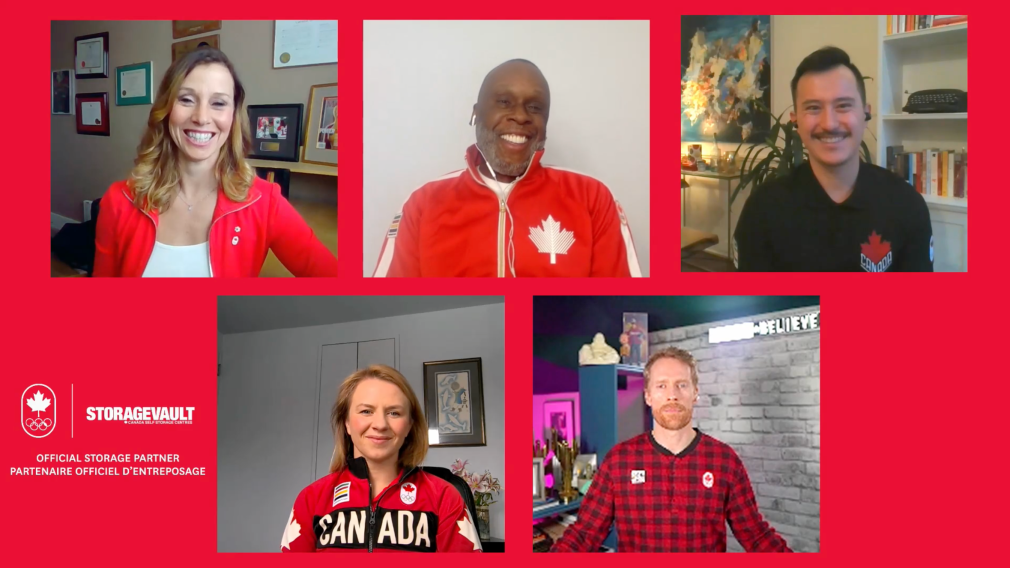 The COVID-19 pandemic has brought its share of unexpected events.

Even Olympic champions Catriona Le May Doan, Bruny Surin, Erica Wiebe, Jon Montgomery and Patrick Chan – who have all been through periods of uncertainty in their respective Olympic careers – have faced their own set of challenges over the past year.

The five Team Canada legends, who earned a total of nine Olympic medals, gathered in a virtual panel to discuss the challenges they encountered recently and during their Olympic careers and to share what helped them get through the difficult times. They all agreed that community and collaboration were key factors, which matches the mission of Team Canada’s new partner.

Earlier this week, Team Canada welcomed StorageVault Canada Inc. to the family as its new Official Storage and Moving Partner. For this five-year partnership, which began in late 2020 and runs through 2024, StorageVault will provide residential, corporate, industrial and office storage services to the Canadian Olympic Committee, National Sport Organizations and Team Canada athletes.

As a proud alumni of @teamcanada I am always thrilled when their partners extend support to athletes, past and present.
The further I get from my days representing Canada, the more “sh-tuff” I accumulate. Thanks to @sentinelstorage and their affiliates @S4YLife It has a place! pic.twitter.com/cd0YR0IHLc

For more than 20 years, StorageVault along with its affiliate brands (Access Storage, Sentinel Storage, Storage for Your Life, Depotium Mini-Entrepôt and Cubeit Storage) has established itself as the largest and fastest-growing storage company in Canada, with more than 200 locations across the nation.

Whether it happened throughout the years of training on their Olympic journeys or as they looked to extend their Olympian legacies, the five gold medallists developed valuable relationships with their communities by getting involved in various initiatives, related to both everyday life and their athletic careers. These relationships helped them stay grounded when everything went off the rails last March.

For Surin, who won Olympic gold with the men’s 4x100m relay team at Atlanta 1996, his most cherished memory related to his victory was the support he received from his community: “Today it has been almost 25 years since we won this medal and I can still hear people reminding me of the moment, and where they were when we won the medal.”

Surin had the chance to work directly with Depotium Mini-Entrepôt, an affiliate brand of StorageVault Canada Inc., to support the Centre Lasallien, a non-profit community organization dedicated to the education and development of youth and adults of the neighbourhood of Saint-Michel, where he grew up.

“We visited the centre, we know that in the neighbourhood there are families in need, as well as many young people who struggle in school. It’s an honour for me to have made this connection and it’s also an honour for me to continue working with Depotium Mini-Entrepôt here in Quebec.” 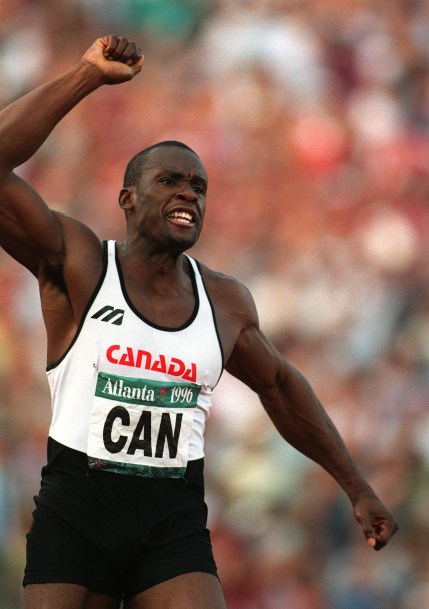 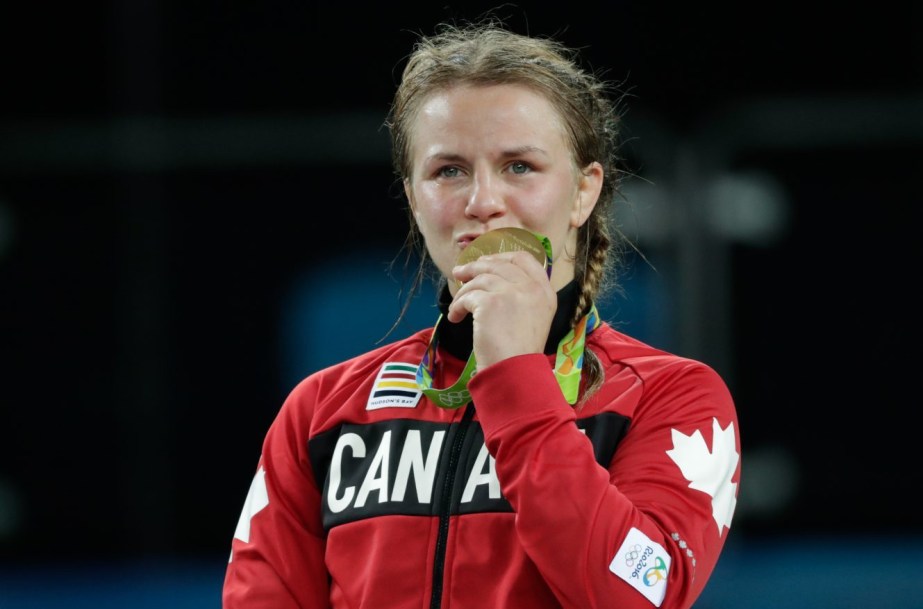 As for Wiebe, Rio 2016 Olympic wrestling champion, she had to face obstacles during the pandemic in terms of access to training to her sport. This inspired her to contact the Rocky Mountain Wrestling Camp where she was previously a camper and counsellor. “I went to the organization and said, ‘well, what can we do?’ So, we put together a pilot program and we hosted a five-day, virtual wrestling camp for the kids. We brought in wrestlers from all over the world to come to be guest clinicians, we did workouts, we used some digital tools to empower these young wrestlers to actually stay in touch with their sport.”

Wiebe, who also volunteers with Heroes Hockey, an organization that provides hockey opportunities for disabled youth, went on to say “finding connection in this time is incredibly important and for me using sport as a vehicle to transform society, to transform individual lives are my passion.”

His initiative “Talking about Race in Figure Skating” has three key objectives: lead a conversation within Skate Canada membership on how race shapes participation; highlight BIPOC voices and experiences in figure skating; and encourage Skate Canada members to begin an educational journey for anti-racism. 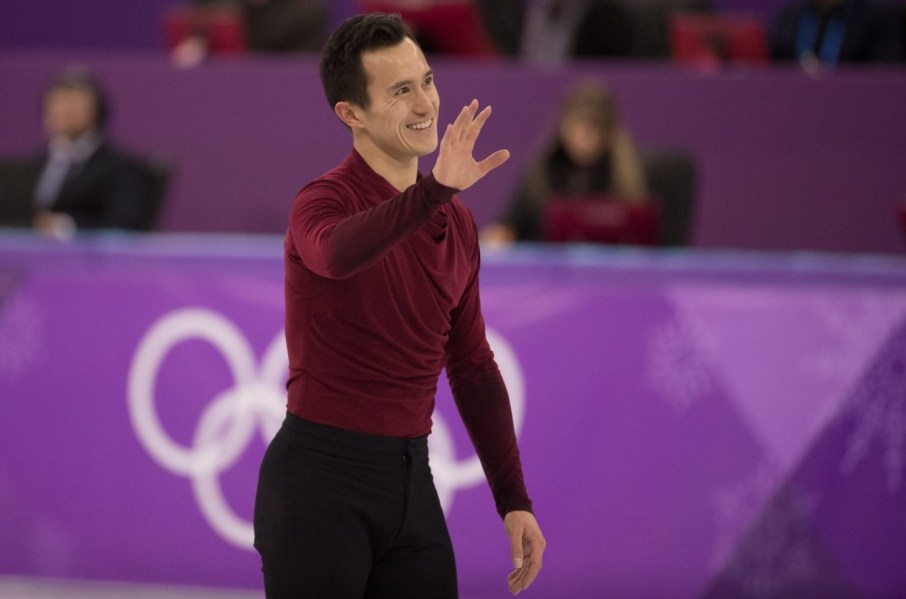 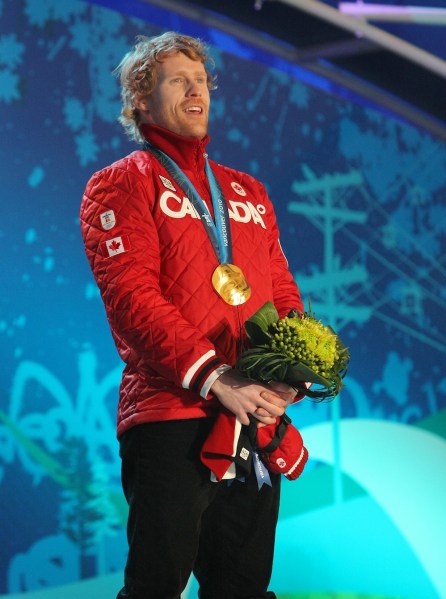 Before he became Olympic champion in skeleton at Vancouver 2010, Montgomery learned the importance of teamwork, even in individual sports, to achieve excellence. “When we began to collaborate, work together, synergize, pool our resources when we were sliding that Whistler track in advance of those Games beginning in 2008, we realized an expedited rate of development. I won by less than a blink of an eye. So that work that we did together, with my team and mentoring each other, I believe was the differentiator between me hustling cars and being somewhere else and actually being part of a panel and saying thank you to StorageVault for paying it forward on their success, for reinvesting in Canada, for providing an opportunity for inspiration.”

Montgomery also brought up all the opportunities he was able to access because of the support he received as an Olympic athlete: “Everything has arisen out of my selfish pursuit to be the best athlete I could be and because of that I have had the opportunity to become a part of charitable organizations and to be able to give back.”

These testimonials fit well with StorageVault’s mission, which has always included supporting the communities they serve, from local organizations to Olympic champions, especially during this unique time. What we will remember from this discussion with these five Olympians is to never underestimate the transformative power of a community on the wellbeing and development of anyone, in normal times or during a pandemic, whether they are athletes or not. Together, we will always go further.