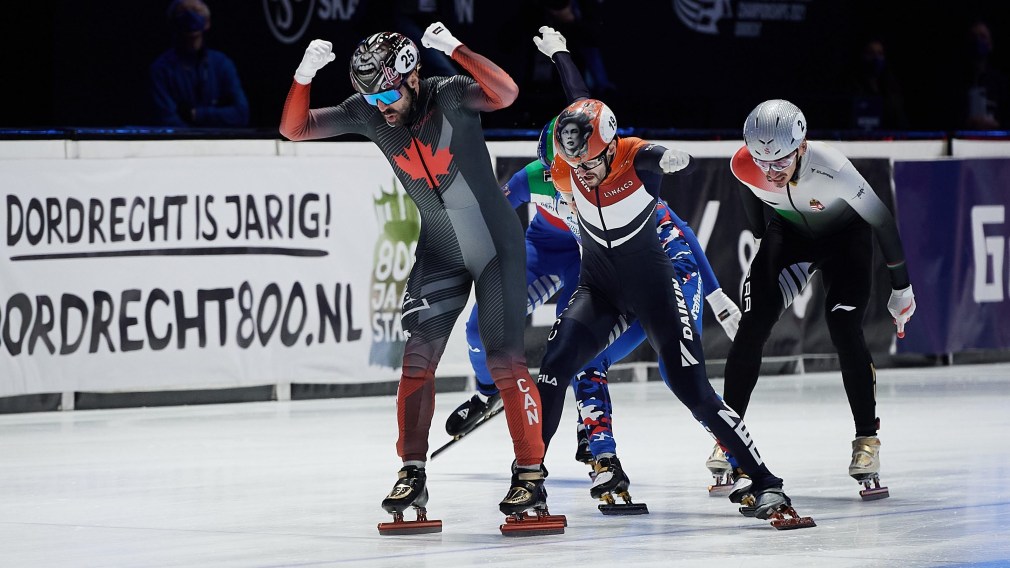 A Team Canada legend adds to his legacy, a couple of rising stars celebrate career breakthroughs, and six medals were won at an Olympic warm up event.

Those are the headlines, let’s check out of the details of an incredibly successful weekend for Canadian athletes around the world:

Canada’s short track speed skating team had not competed in over a year, but there wasn’t too much rust showing at the ISU World Championships in Dordrecht, Netherlands. Charles Hamelin — in his 17th appearance at the worlds — won his third career world title in the 1500m. At 36, he is one of the oldest competitors on the circuit but he came through a packed final of eight skaters to win the 37th world championship medal of his career.

“I’m really happy with my result. I kind of forget what it was like to win medals and celebrate, so this was really special for me. I worked really hard over the past year in training, so it feels really nice to see my hard work pay off.” – Courtney Sarault pic.twitter.com/lqZfYMNTGw

It was an action-packed weekend on the mats at the Matteo Pellicone Ranking Series in Rome, Italy. After winning bronze last weekend in Ukraine, Erica Wiebe captured the 76kg gold medal. Also on Friday, Michelle Fazzari added a gold medal in the 62kg weight class.

What an absolutely epic battle for the podium spots today in 🇬🇪🤯
In the end Eliot Grondin 🇨🇦
wins the fight for 🥇, Lulas Pachner🇦🇹 claims 🥈 and Lorenzo Sommariva🇮🇹🥉
What a show, gentlemen💪👏#fissnowboard #sbx #bigfinalofmen pic.twitter.com/a1ipNwTSYd

Memorable moments on the green

Corey Conners led the field into the weekend at the Arnold Palmer Invitational, ending up as a top-three finisher when the tournament finished on Sunday, three strokes back of the lead. That boosted him up 16 spots in the Official World Golf Ranking to 44th overall, just the sixth Canadian ever ranked in the top 50.

BOOM! Conners makes his third eagle of the week on the 16th and he’s 1 back 🔥🔥 pic.twitter.com/3eVJUdlGvh