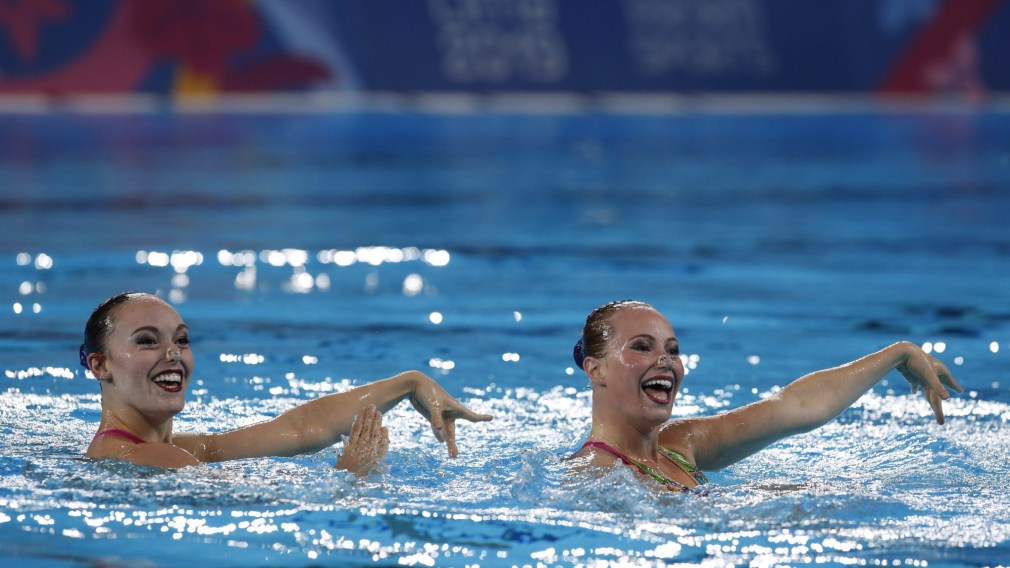 Over the last few days, some of Team Canada’s summer sports stars returned to the spotlight while an Olympic spot was secured in a winter sport.

Keep reading to catch up on what you might have missed this weekend:

Simoneau and Holzner are golden 🥇

Jacqueline Simoneau and Claudia Holzner went four in four over the weekend in Budapest as the Artistic Swimming World Series returned to live competition following a virtual event in late February. On Saturday, the pair won the women’s duet technical event. Simoneau captured gold in the solo technical.

Then on Sunday the Canadians returned to the pool to seize more gold in the duet free program and Simoneau won the solo free event.

Both the men’s and women’s rugby 7s teams finished Week Two of the Emirates Invitational 7s as Cup Finalists.

Two weeks of incredible 7s action as the Olympic sport returned to Dubai, for the Emirates Invitational 7s!

Stars and future stars battling it out in the heat of the desert.

Here are the final standings.

Who was your favourite? pic.twitter.com/H9JeIhGWo8

On the first day, the Canadian women won all three games to finish atop their pool. But in their Cup Final on day two, they fell 17-12 to France to finish in second place. On the men’s side, the Canadians won two and lost one, finishing second in their pool. They went onto day two, winning their quarterfinal and semifinal matches, but fell to Argentina in the Cup Final.

Reunited and it feels so good 🎶

In soccer, the women’s national team defeated Wales by a decisive 3-0 score in an International Friendly match. Deanne Rose, Evelyne Viens and Jessie Fleming scored for Canada. It was the first ever international goal for Viens.

Canada, ranked No. 8 in the world, will travel to England for their second International Friendly match during the month of April on the FIFA Women’s International Match Calendar. That game against the sixth-ranked English will take place on Tuesday at Stoke-on-Trent.

It wasn’t to be today for Canada and this will be the last stop for the team at the #WMCC2021 🚂 Thank you for representing Canada with class and for clinching a spot for Canada in Beijing!#WMCC2021 pic.twitter.com/2Sl6QuF865

After clinching that Olympic spot, the Canadian team took an early playoff exit. In their qualification game on Friday night, Bottcher and company dropped a 5-3 decision to Scotland. Sweden would go on to win the world title, with skip Niklas Edin earning his fifth career and third straight gold medal.

Christabel Nettey won the women’s long jump at the Miramar Invitational Grand Prix on Saturday in Florida. She recorded a winning distance of 6.63m and earned some important world ranking points, which will be key to securing Olympic qualification.

In other athletics news, Aaron Brown ran a season-best 10.08 seconds in the 100m at the same meet.

Swinging to a hole-in-one ⛳️

Corey Connors played in his fourth Masters at the Augusta National Golf Course in Georgia. Finishing in the top 10, he secured a ticket to next year’s tournament. Conners started the final round five strokes behind leader Hideki Matsuyama, who went on to become the first Japanese man to win one of golf’s majors.

On moving day on Saturday, the Canadian sunk a hole-in-one, which set him up for a possible chance at becoming the second Canadian to wear the Green Jacket. This hole-in-one came 87 years after a Canadian recorded a hole-in-one in the very first Masters. Connors is the sixth ever to ace at the sixth hole in the Masters.

Clay season is back!

The court surface may change, but our support for Canadian tennis stars remains the same. Félix Auger-Aliassime returns to competition on Monday at the Monte-Carlo Masters in Roquebrune-Cap-Martin, France. He is the lone Canadian in action at the ATP Masters 1000 tournament.

In women’s doubles at the Charleston Open, Gaby Dabrowski and American partner Asia Muhammad fell in the semifinals, 7-5, 6-1, to the duo of American Nicole Melichar and Dutch Demi Schuurs.