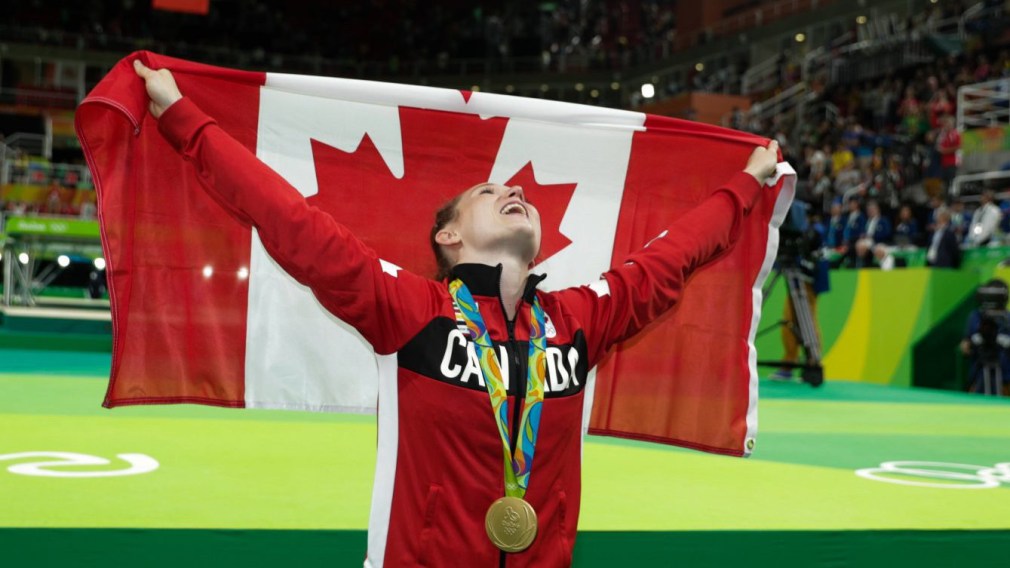 Team Canada and Sportsnet have teamed up to launch a six-part digital series, Athlete2Athlete.

The ten-minute webisodes will feature high performance athletes talking to each other about sport and the world around us. Introduced by Arash Madani, the series gives athletes a space to discuss how Canadians can unite and inspire others during trying times.

Among the timely topics discussed are LGBTQ+, COVID-19, anti-Black racism, mental health and more. You can look forward hearing from to some Canadian legends such as Mark Tewksbury, Rosie MacLennan, Donovan Bailey, Kia Nurse, Stephanie Labbé, and Max Parrot, just to name a few.

Don’t forget to turn on your notifications as the series will be shared on Team Canada’s and Sportsnet’s social channels, sportsnet.ca, Sportsnet’s YouTube channel, and Sportsnet NOW.

In the sixth and final episode of Athlete2Athlete, two-time Olympic gold medallist Marie-Philip Poulin and Shane Doan, who competed at Turin 2006, sat down to chat about their hockey careers.

Both players have impressive resumes; it was Poulin who scored the gold medal-winning goals at both Vancouver 2010 and Sochi 2014  while Doan played professionally for over 20 years and won five world championship medals. They say despite all the glory and challenges they faced throughout their careers, nothing is better than wearing the maple leaf and feeling that Canadian pride.

“When you wear that jersey, it’s funny, like, obviously you train with Team Canada, you train so hard, and you get to the Olympics and you become a family,” said Poulin. “You get to know the other athletes; you get to know what they go through. At the end of the day, all athletes have their ups and they have their downs. Mentally, physically – it’s hard. Obviously, it’s fun to talk about it you; get there [the Olympic Games] you make friendships. It’s something that’s so, so fun to be part of, and obviously in Canada we couldn’t ask for a better country, to be honest. Representing your country at the highest level, it’s rewarding.”

They may not have played together, but the two have admired each other as athletes for years. In the time of COVID-19 they say that they’ve realized that it’s important to take every opportunity because they can only play hockey for so long despite their love for the game. Never taking anything for granted and always giving it their all when it comes to representing Team Canada is something they would never pass up, and it’s an experience of a lifetime.

Known for his world record and gold medal performances at Atlanta 1996, Donovan Bailey sat down with Aaron Brown, Olympic bronze medallist to talk about COVID-19 and the Black Lives Matter movement. The two sprinters reflect on how Black athletes have been treated throughout history. Ranging from Tommie Smith and John Carlos who raised their fists in protest at Mexico City 1968; to Donovan Bailey speaking out against the treatment of Black athletes in Canada.

“There’s support that some athletes, some Black athletes, were not getting from some sports organizations in Canada that white [athletes] were,” said Bailey. “24 years ago, nobody was listening, and no one wanted to speak to me. And of course, it’s Canada so, they’re used to athletes coming in and obeying and going about their business. They knew I was someone completely different.”

Bailey says he hopes that because of the Black Lives Matter movement, more people will listen and realize the changes that need to be made.

Brown who was on the Rio 2016 relay team that broke Bailey’s relay record has the same sentiment when it comes to changes in society and the importance of the anti-Black racism movement.

“I think when you have movements like the Black Lives Matter movement, you get people to talk about the uncomfortable things and put them in positions where otherwise would’ve just kicked it down the can,” said Brown. “So, the more awareness you can have around these things the better it is. You can’t have all lives matter without Black Lives Matter. It’s kind of a backwards rhetoric. At the end of the day, everybody wants equality, or at least most people do and want the best for their society.”

Brown and Bailey agreed that there is still a lot of work that needs to be done when it comes with justice and equality for Black people, but they see hope for the future.

In the fourth episode of the web series, Olympic moguls champion, Mikaël Kingsbury and Olympic silver medallist snowboarder Max Parrot, sit down to talk about pressures, passions, and perseverance.

Overcoming obstacles is nothing new for Parrot. In 2019 he was diagnosed with Hodgkin’s Lymphoma and underwent chemotherapy treatment for six months. Now cancer-free, he says treatment took a toll on him mentally and physically when he was constantly exhausted and lacked motivation. Two months after his treatment finished, he got an email saying the X Games were happening later that summer, giving him just two months to prepare.

“When I was younger and I was saying that I wanted to be a pro snowboarder one day, everyone was like, ‘Yeah, yeah, yeah…’ no one really believed me,” said Parrot. “And then over the years I accomplished so many big challenges. And in the end, when I announced to my family I wanted to be in the X Games, and my goal was to win as well, my family was like, ‘okay, we believe you’. So, in the end I was able to go out there, get my energy back in two months of training and I was able to win, which I was really happy about, and my plan worked out. Because with cancer and everything, it’s in those moments where you realize life is precious and important.”

For Kingsbury, who has been ranked first in the world for nine years, he says that pressure to be on top is what keeps him going. He says that he competes best under pressure because he hates to lose but loves to win. Rather than looking back on his performances, Kingsbury says he’s always looking ahead to see how he can be the best athlete on and off the slopes to remain number one.

Despite the devotion to their sports and the pressures they have both faced throughout their careers, the two said quarantine allowed for a much-needed mental break, but they are excited to get back to training as they prepare for Beijing 2022.

In the third episode of the series, Olympic champion Mark Tewksbury, Rio 2016 swimmer Markus Thormeyer and skateboarding Olympic hopeful Annie Guglia talk about their experiences as LGBTQ+ athletes. At the top of their conversation, Tewksbury expresses his joy about how both Guglia and Thormeyer have been able to come out to their teammates and communities and be their authentic selves.

With celebration of Pride month being different this year, Thormeyer and Guglia took advantage of the time they had to listen and learn more about the positive impact of the Black community on the LGBTQ+ community.

“There’s usually a parade and stuff. I think in replacement of that, I have been educating myself on how the Black community has helped shaped the LGBTQ+ culture; and also, how they have contributed to gay rights,” said Thormeyer. “I think that through education anyone can just become a better ally for the community and my fellow community members.”

The three reflect on the empathy that they can give the Black community as they know what it can feel like to be marginalized and isolated. Tewksbury says that even though the three may not understand what the Black community goes through, they can be allies and help amplify the voices for others in support.

In the second webisode of the series, Team Canada basketball stars Nurse and Langlois discuss the recent anti-Black racism protests as the Rio 2016 Olympians try to make sense of events that transpired after the death of George Floyd. The two talk through how they are feeling and what needs to change to make the world – and sports – an inclusive space for everyone.

“How do you break the system, how do you abolish the system […] You can’t erase history, you can’t take it back, you have to teach it, people need to see it, people need to know it and understand it — so that if my kids went up to someone one day and said, ‘Do you know who Rosa Parks is?’ I hope that their white allies know who Rosa Parks is,” said Nurse.

Nurse and Langlois talk about the importance of accessibility within sport, so that no matter someone’s background, they have the opportunity to participate. Both Langlois and Nurse explain how basketball helped them meet people from a variety of backgrounds. They say being able to work with different players of different lifestyles, ethnicities and others who don’t look like them taught them not only to work together to achieve the same athletic aspirations and goals, but to also better understand, learn and appreciate one another.

Kicking off the series are two-time Olympic champion MacLennan and Olympic bronze medallist Labbé, who discuss training at home in a COVID-19 world— MacLennan without a trampoline at her disposal, Labbé practicing without soccer balls— and the adaptations the Olympic athletes have made.

Despite their unusual training environments, they both agree that it’s important to focus on the aspects they can control and scheduling time for themselves to stay grounded. Labbé talked about the importance of doing meditation every day for her and her partner, track cyclist Georgia Simmerling.

“Georgia and I, probably for about two weeks after the initial decision [to not go to the Olympics] started feeling the weight of it and the emotions on it—both of us had plans on retiring after this year—and you start asking all these questions and thinking about the ‘what ifs’ and [it] snowballs,” said Labbé. “It kind of takes you outside of your body and your head can go on with these thoughts for so long. So, I think meditation definitely grounds us and kind of brings us back to the present moment.”